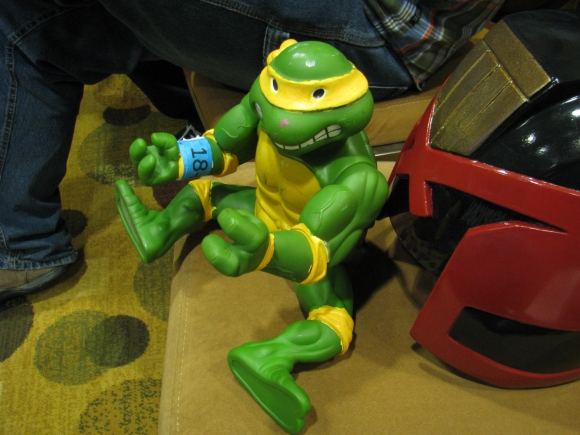 While work, New Jersey rush hour traffic, and street-snarling protests delayed my Friday evening arrival at DerpyCon, I had time enough to at least stay for one panel. Luckily, said panel was the one I most wanted to attend for its potential meta-ness: THE COMPLETE HISTORY OF THE HISTORY OF JAPANIMATION IN JAPAN. (I was really REALLY hoping for a trainwreck retrospective of anime history panels.) Unfortunately, the title on the website and in the Pocket Guide turned out to be a typo, and the non-meta title in the Program Guide didn’t warrant me straining my consciousness or risking my safety on the drive home thereafter. So what follows are descriptions of the Saturday panels I at least partially attended in the year of our derp 2014. 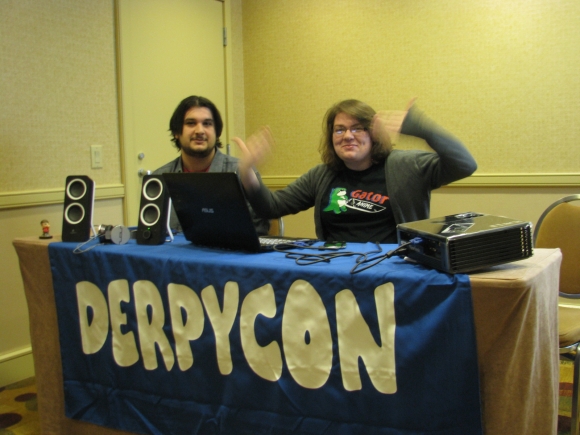 Ciara Powell and friend, who also present the delightful “Anime for Couples” panel, categorized and explored anime and manga that featured, you guessed it, girls in space. Together, the panelists isolated the setting to look at how it’s used by different themes. Titles fell into a number of categories, including magical girl, transported worlds, romance, workplace drama, and (my favorite) “Space Cadets.” Clips and frames were peppered throughout, and the panelists expounded upon why each cited title excited them personally or was a good example of the running theme. There was nothing heavy here — just a light, laid-back panel with some good recommendations and perhaps some insight into the familiar. A pretty grand way to start a Saturday.

Poetry in Anime: the Power of Words in a Visual Medium

My panel, Poetry in Anime, has been confirmed for Castle Point Anime Convention (CPAC) 2015. Don’t miss it!

How to Make Your Characters Believably Sick and Twisted 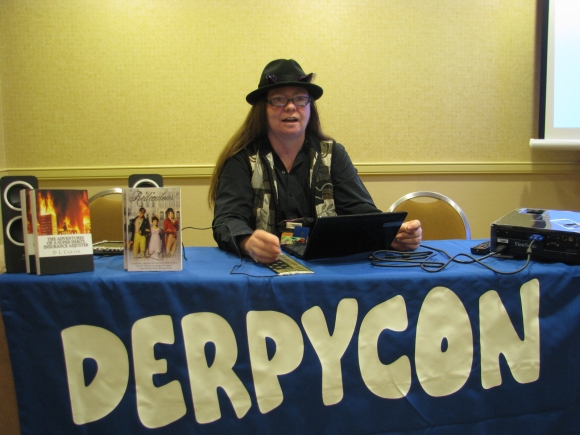 Presented by D. L. Carter, this panel was an exercise in reading too much into things. (Needless to say, I loved it!) Though to be fair and specific, the panel was about using reverse profiling to concoct and flesh out a believable backstory for realistically “evil villains and sick heroes.” I was a tad apprehensive when Carter mentioned the TV show Criminal Minds as an exemplary reference point for process, and that feeling wasn’t exactly alleviated when she started making quick, vague/loose claims regarding several Looney Tunes characters’ supposed categorical pathologies in quick succession. But when she started reverse-engineering Sylvester, everything started to click. Clark knew how to engage the audience to keep things interesting and had a wonderfully twisted sense of humor that made everyone leave with a Joker’s smile carved into their face.

What I’d love to deem an egregious act of cultural appropriation was, in actuality, just plain uncomfortable in just about every imaginable aspect. It didn’t have to be this way. Why, mommy? Why was the half-naked man portraying Discord undulating so? Why were men well past 30 years old the only ones taking video of young women dressed in pony-fied harem outfits? Why on God’s green Earth was the “appropriate” way to applaud the belly dancers’ feats by screaming like Xena the Warrior Princess (a la mock Arabian battle cry)? Performed by Antipode AT ONE O’CLOCK IN THE AFTERNOON, I was actually hoping this would define the con as a sort of family-friendly mascot event. After five minutes, I just had to leave for fear of my immortal soul.

Bucking the Mainstream: Genre-Bending & Riding the Ragged Edge of Disaster

After wandering around in a trauma-induced daze brought upon by bare-midriff-ed ponies, I found solace in a room with chairs where people were talking calmly. Even though I wasn’t that late, I seemed to have missed the presentation by Steamfunk Studios. All that seemed to be happening was a recurring grammatical formula not unlike nineteenth century word games (think “similes” from A Christmas Carol). Presenters asked for the name of a show or genre from the crowd and then described them using naught but other show titles and genres (thereby associating their concepts). This went on for some time, and the panel was scheduled for an entire hour. My life was scheduled elsewhere. 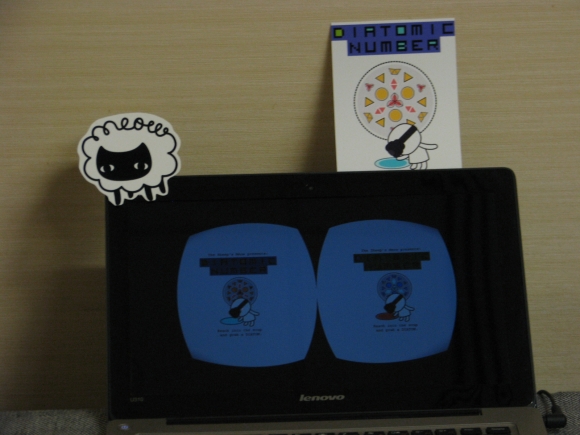 I’d heard about the Oculus Rift but never seen one … until DerpyCon! Evan wrote about a much more involving game than the one that was available here, but it was still a fun toy and addicting game. Diatomic Number, developed by The Sheep’s Meow, is a game of observation and control. The player uses one hand to pan about a screen with like objects that jitter and glow similarly. Hidden amongst these is one variation. The goal is to find and keep centered the object exhibiting that abnormality until it bursts off the board. As levels progress, the behaviors of the objects get more intricate and the colors vary with increasing speed and lower intensity. It’s absolutely engrossing to minds such as mine obsessive over minutia.

In the more traditional electronic gaming department, fellow attendee Vinnie and I were solicited to play a multiplayer brawler called Skyhook. The game plays like a stripped-down version of Smash Brothers and is epic levels of fun specifically for that same simplicity. Each player, who can choose to play as one of four in-game characters, is armed solely with a grappling hook that serves as weapon and arena navigation tool. There are also floating airships with massive cannons, but nothing is invincible. It’s as fun to die as it is to fight as it is to win in this game, and the multitude of available maps provides just enough variance to keep things interesting during several sequential rounds. 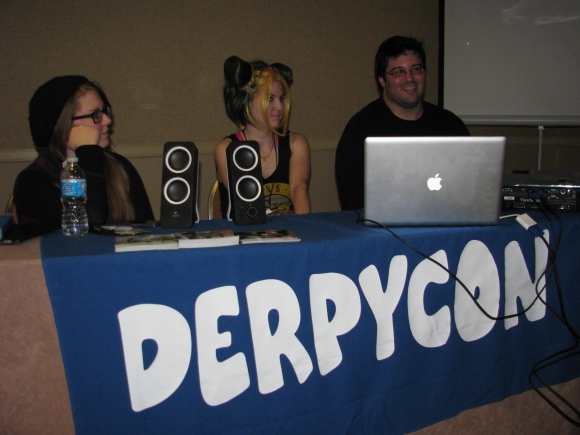 Adam Tilford, author of the Shattered Heaven novels, decided to animate his own works. If a picture is worth a thousand words, those are bazillions of words I never need to read. It’s easy to mock the awkward first steps of someone following their dream, but it’s also admittedly kind of heartwarming to see community collaborate for the sake of having fun. Done on the cheap and in-between job and other obligations of livelihood, this project involves those donating their time and varying degrees of talent whenever possible. Tilford brought the audience through his process and tools and stressed the fact that he is a writer not an animator. This would have softened the blow of that which he so graciously screened for the audience if certain scenes weren’t either ripped off from various anime (he stole a famous Fullmetal Alchemist burial scene!) or atrociously paraphrased rubbish. Tilford also admitted to visually basing some of his scenes directly after shows he’s seen and insisted that didn’t matter. This is true. Once you watch the scenes, it’s obvious that the amateurish nature softens the blur of offense via unintentional parody. 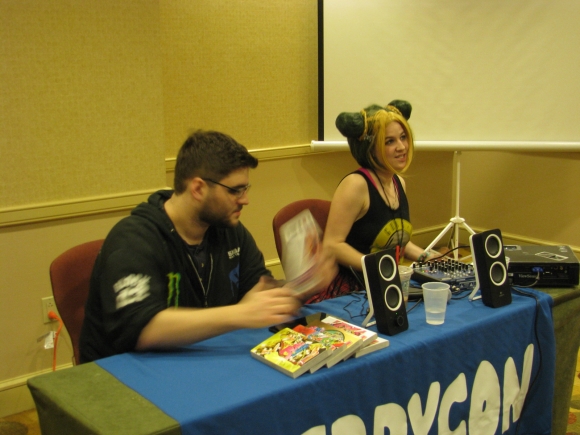 Defying all dreaded expectations, this was not an ask-a-character-in-costume panel! VA Kira Buckland and a dedicated JoJo’s scanner ran the audience through the entire storyline of the JoJo’s Bizarre Adventures manga (sans spoilers). They touched on the defining traits of the main and supporting characters, explored the strengths and weaknesses of the various story arcs, examined rights issues as a hindrance to stateside publication (as well as how things have been changed to sidestep that), and passed around copies of the manga as well as art books. The love for the series was evident via the elated presentation and constant back-and-forth behind the microphones. Overall, this was a great 101 made all the brighter via informed fans and structured exuberance. They knew what they wanted to cover and did so with contagious enthusiasm.

History of Mayhem: Fan Parodies Throughout the Ages 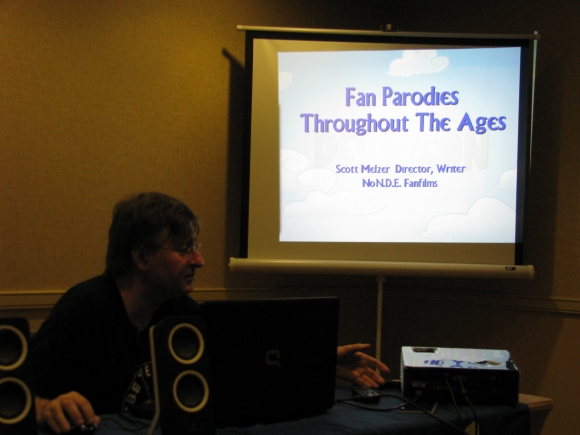 So much more than a clip show, Scott Melzer’s panel was a time capsule of yuks narrated from the fondly reminiscing pages of an aging diary that’s never been forgotten. Melzer ran through the various editing, process, and distribution methods. In doing so, he touched on common jokes and indicators used in the parodies as well as why they were included. Melzer also explored how advancing tools have changed not only content but expectancy and appreciation. In an aside, he mentioned audiences tend to leave during the older clips, but I have to say that I still found them a riot. Well, I am past my mid-30’s I guess. Other aspects in the presentation included the still strong sense of community among editors as well as content creators and the barriers technology and ingenuity are breaking to this very day. This two-hour panel flew by like nothing thanks to Melzer’s solid mix of experience and storytelling aptitude.

Not much has changed since I reviewed this panel’s Otakon 2014 version, but I have to say one thing: if within the first five minutes your choice of content makes a man in the audience say “I feel broken,” you’re doing Kawajiri proud (and in style)! 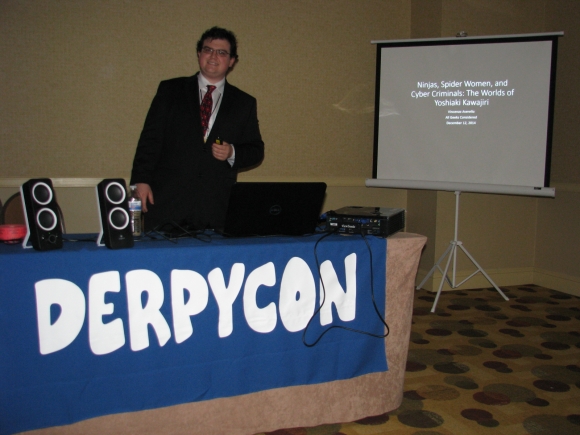