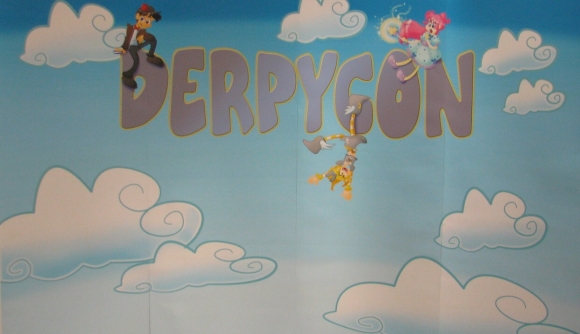 Brand new cons are exciting for all their possibility, but I imagine starting out has got to be tough. Even with the multitude of cons from which to draw inspiration or ask advice, defining the identity of a new one — deciding the not only the what, but how that what is to be offered — must be a difficult process. The inaugural DerpyCon, which took place at the Hyatt in Morristown, NJ from December 5–7 in 2014, chose to name itself after a small, mentally challenged horse. While this self-proclaimed multi-genre sci-fi con more than owned the adoption of its namesake in a few ways, the con itself was (for better and worse) not nearly the horror I was expecting and has a lot of promise depending on some crucial future decisions. 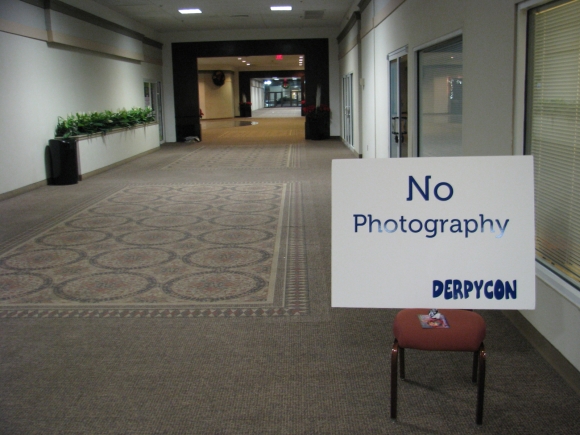 Morristown is a great location for a small con. Not only does the Hyatt, walking distance from a train station, offer free (validated) parking, but the venue is surrounded by all types of eateries in a pedestrian-friendly, skyscraper-free, Chicago-like downtown. A bit of bad luck: Friday and Saturday were 24-hour periods of precipitation. This, mixed with the bitter cold, kept everyone inside the hotel and did not allow much chance to properly explore the surrounding area in order to catch a breath of fresh air (so to speak). This wouldn’t have been too bad if there were more distractions available at the con other than the hotel bar.

The venue itself was more than spacious enough to comfortably accommodate the con’s 727 attendees. (Whether or not that count was due to the aforementioned weather is anyone’s guess.) The panel rooms were tiny, with the smallest seating 15–18 people at most, and rarely full. In fact, many panelists spoken to cited empty rooms for multiple presentations. This could have been because of the general layout, which was initially a little bit befuddling for its rooms scattered between floors and inside and outside of the main registration area, but spending so much time inside at least fostered acclimation pretty quickly. 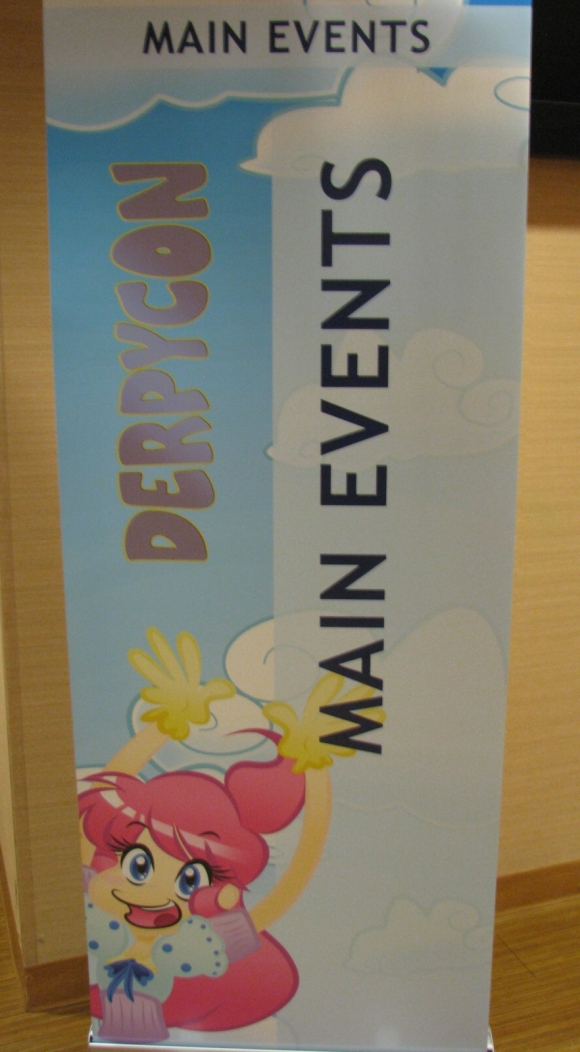 Organization (Not Derping Around)

Things seemed to be handled admirably for an inaugural event. My own experience with a vanished registration was handled professionally, courteously, and relatively quickly. Less could be said for details which really should have been ironed out well before the con got started, like — as I overheard while waiting for my registration issue to be resolved — whether the con’s dance was to be formal or casual. (It ended up being “optionally formal,” whatever that means, in case you were wondering.) DerpyCon provided attendees with badges, pocket schedules, and guidebooks that were of a quality on par with those of veteran cons. Signage was, for the most part, clear and abundant and branded to the nines, and staffers were very helpful and friendly in answering any other questions throughout the weekend. Despite its schedule's incompatibility with Windows phones, I’ll also praise DeryCon’s website, which was fully fleshed out with forums and an interactive schedule that let visitors check off and isolate events of interest. This did not seem like the effort of a first-year con.

Allocation of space in a small venue can be tricky. While sticking the sole video room between the Panels 4 and 5 seemed a poor decision in concept, the arrangement ended up being of little consequence in the end. Bleed-through from the sound systems in each room was minimal. Actually, I heard more sound from Panels 4 in Panels 5 than I did anything from Video 1 in either of the other two rooms. (I cannot speak to the effect of a similar arrangement of the karaoke room right next to the manga library.) Main Events, where the concerts and “Dance Party” were held, was situated well away from most goings on and thus very audibly isolated despite the obvious amperage (and at least one blown-out speaker). 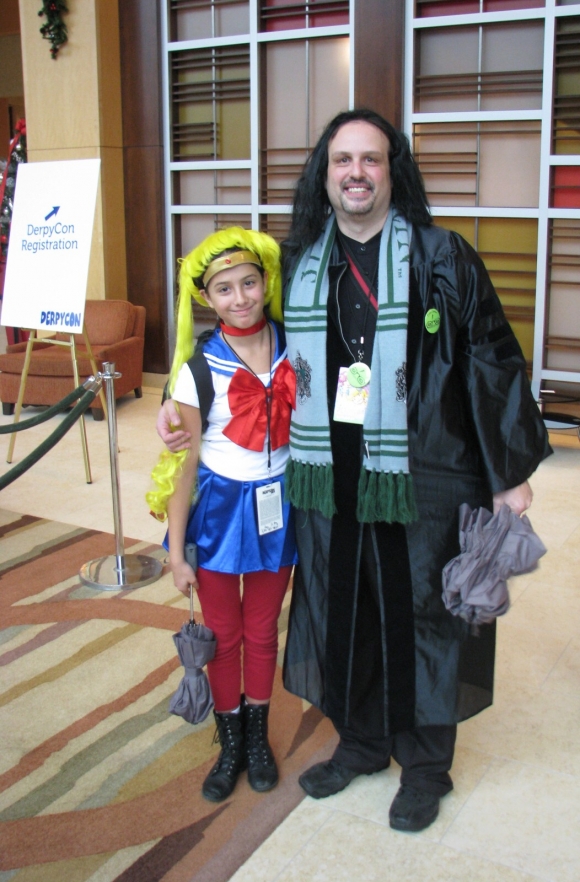 Even though DerpyCon took its name from and was heavily branded after the My Little Pony: Friendship is Magic (MLP:FiM) character Derpy Hooves, the programming was not focused on that cartoon. There were pony panels and events, of course, but they were vastly outnumbered by those dedicated to other fandoms. Despite my hopes and fears that this con would be overrun with psychotic pony proselytizers, DerpyCon felt more like an all-inclusive nerd con. While I’ve no complaints about this, other than the sheer disappointment of not being able to poke fun of MLP:FiM fanatics, I will take a second to rail against some of the presenters I encountered.

I wouldn’t even have to use my toes to count how many good panels I attended at this con. While most were either innocuous or offensively bland, a few were presented by incendiary personalities. The worst of the latter that I encountered: a presenter who went out of his way to emphasize his pseudonym ending in “-fag” (conveniently omitted from the con guide/website description) during a consequently uncomfortable and subsequently unfunny MST3K-ing of the Equestria Girls movie, and a group of presenters who were asked to clear the room but refused to “until they kick us out” despite the next presenters and audience members already waiting in the halls. There’s no real way to prevent the former, but it speaks to what was chosen for the programming tracks. As for the lingerers, con staff should have stepped up and evacuated the room. Tough skin comes with time though. And, obviously, I could not attend all the panels, so saying there was a total lack of interest is unfair. What sounded interesting to me, academic panels and their ilk, seemed lacking, however, and I spent a large part of the con trying to kill time. 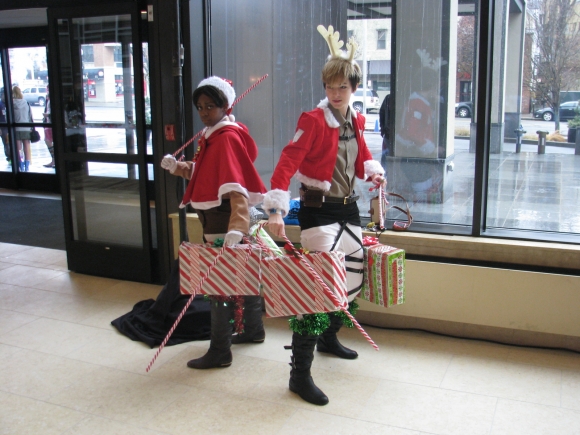 Stuff and Junk and Stuff (When in DerpyCon, Derp as the Derpers Derp)

Mingling amongst the usual wares of the Dealers Room were a few unexpected rarities. There was a money pit offering figures (12 in. and othersize) from Space Battleship Yamato, die-cast Mach 5 replicas, and other classic bits of nostalgia at insane prices. Another vendor offered some absolutely gorgeous, Sailor Moon-inspired tree ornaments that were laser-cut from wood and olive oil-cured with scorch accents and intricate cut outs. Artists Alley, in addition to a ton of stuffed sushi, offered a decent representative mix of the usual fan/original prints as well as official DerpyCon merch. The standout offering here consisted of large feathers made into quill pens featuring painted images on their lacquered surface. 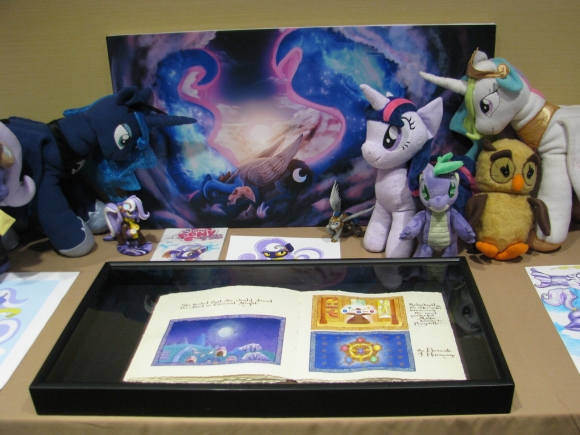 Something a little more unique to this con was the Traveling Pony Museum, which promised “exemplary works by talented fans.” The tour guide for this 10 x 10 ft. room — lined and filled with tables featuring plushes, paintings, prints, and other works of (fan) art inspired by MLP:FiM — also promised works based off of both the old and new My Little Pony series. While there was plenty of fan art inspired from MLP:FiM, the sole example of art from the original series was a lone(ly) record of the soundtrack. A record player, I was told, would be in the following day (Sunday) to play the sultry sounds of Danny DeVito. As Artist Alley-typical as this all sounds, there was actually one piece of real magic: a handmade storybook; one page was ceremoniously turned every hour on the hour.

From indie games that employed everything from standard controllers to the Oculus Rift to standard FPSs and LAN-party brawls on more recent consoles and mobile platforms, the video game room was a small but successful offering. I’ll cover the games I played during the Indie Games Showcase in the forthcoming panel report. Working my way from the electronic to the primitive, I did spend a decent chunk of time in the tabletop room … throwing rocks. The game was Attraction, which is akin to marbles but with magnetized rocks. Sometimes it’s the simplest of things that are the most addictive. Or maybe desperation is the best spice. Either way, people were constantly in the tabletop room, which offered a decent selection of distraction for all manner of traditional gamer.

So, Should You Go? (The Lowderp) 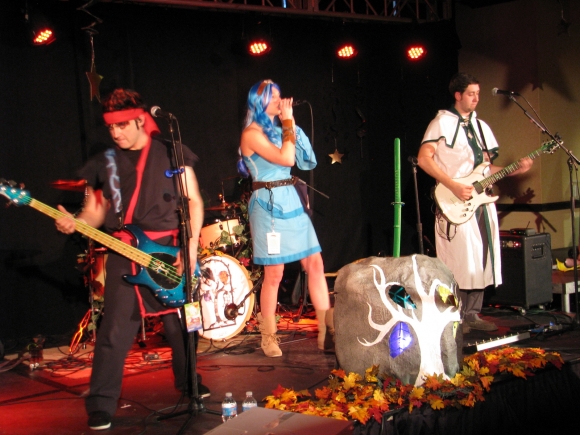 DerpyCon had the weather working against it from the start, but bad weather cannot be blamed for what was otherwise a pretty trying con experience for a panel-hopper such as myself. Guests were better than what is expected for a small, first-year con, but more high-profile fan panelists might be better in terms of content and draw (and economy). On a similar note, I’d like to see a small con do away with “Ask a Character” panels but also realize that those types of panels may be the necessary evil for initial attendance growth. Either way, stronger panel choices would be appreciated. As a panelist and panel attendee, I’d also advise 10–15 minute breaks between panels for setup/breakdown and travel time. Also, kudos must be given for opting for live music via two actual bands. (Related: sympathies to the bands and DJ that played to crowds of 10–20 people.)

I had a decent enough time at DerpyCon, but there just wasn't enough content to compel me to make the 1.5 hour trip a third day in a row. The con’s heart is in the right place and its framework is solid, so all that's left is for the organizers and the fans to come together to build it year by year with increased focus and more appealing/targeted programming. It's close enough that I'll check back in 2015 with high hopes. 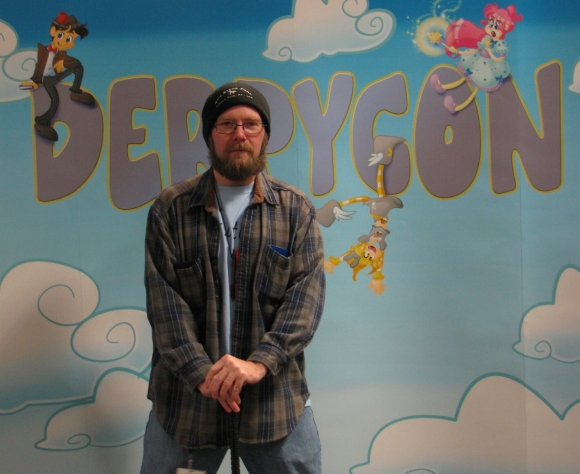