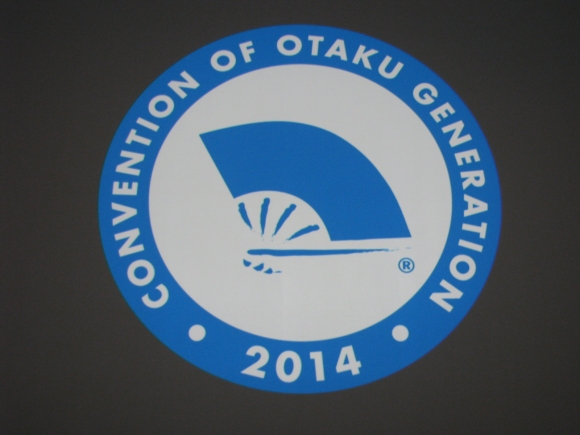 As much as Otakon 2014 reflected a welcome return to form in terms of the convention's organization, it was also an Ani-Gamers reunion! Evan, Ink, and David once again converged on the BCC in Baltimore, MD to … briefly say hi and then run around for three days following either the wind or hectic schedules of our own creation. But hey, our one-track minds are your reading pleasure. After the break, check out our thoughts on the procedural, the educational, the surprising (and not so surprising), the guests, the panels, and everything else we saw fit to relay to you. 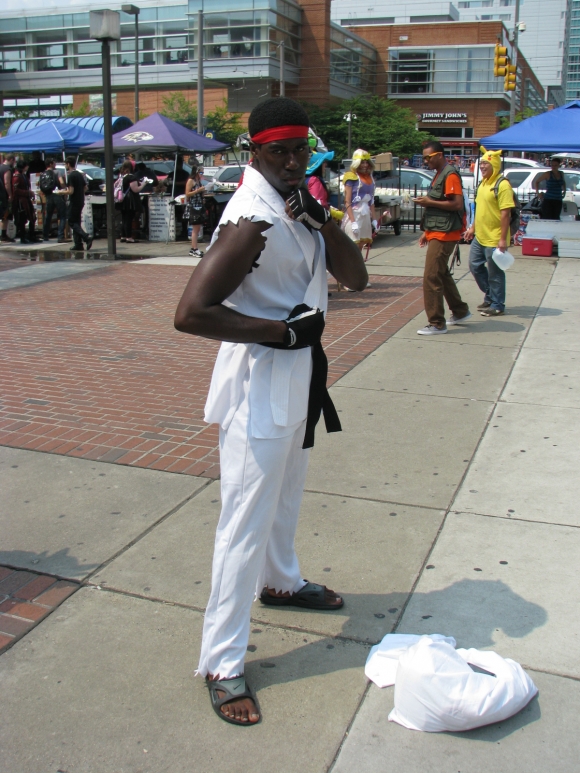 It’s a minor thing like the lack of paper schedules that can set the tone for an event like Otakon. For every administrative decision such as the use of plastic badges, we get unfortunate lapses in judgment like this. There’s a tactile immediacy in a paper schedule that an online guide doesn’t offer, and even if schedule changes render the print version only partially accurate, the map alone is worth the dead tree. 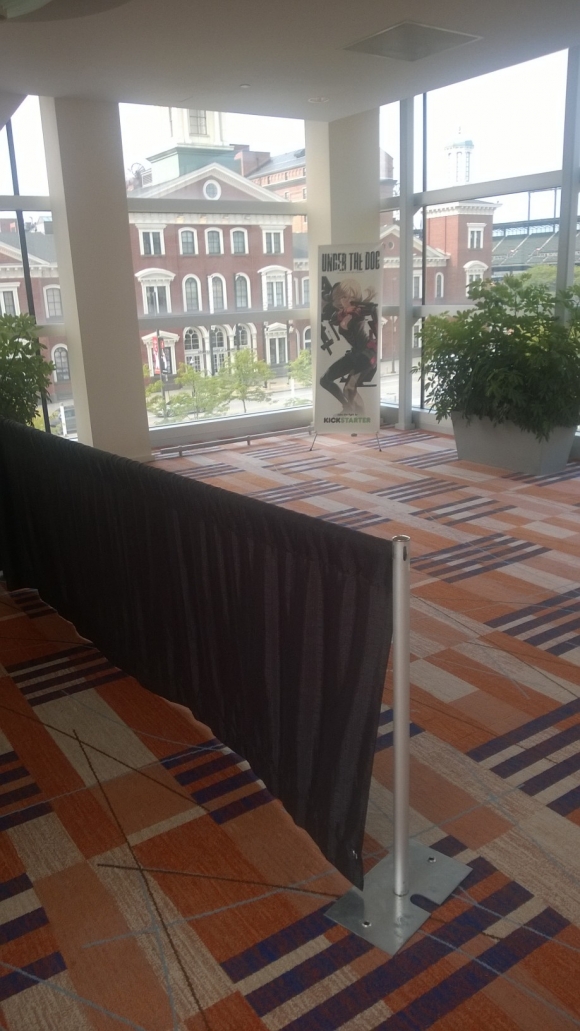 Coming hot on the heels of an inexplicable streak of disastrous Day 0 problems across notable conventions on the west coast, not even Otakon was spared catastrophic computer failures and clustering mobs of attendees clamoring for their badges. I get to bypass that mess as a member of the press, however this sort of stumble out of the gate normally doesn’t bode well for the rest of the weekend. Thankfully, Day 0 was not a reflection of the con proper. With two decades of experience under their belt, Otakon staff rebounded quickly from the initial setbacks. Once the con was actually underway, I was pleased to see that they were implementing more effective measures to manage the crowds. This year, there were dividers in halls to form a two-way lane for heavy traffic, the welcome abolishment of the Dealers’ Room line, and a number of patrolmen wandering the conspace to herd the kids flopping on the ground. People are never going to learn to stop holding impromptu photoshoots in areas where people are trying to get through, but it does give some peace of mind that someone recognizes the common frustrations of the con experience. 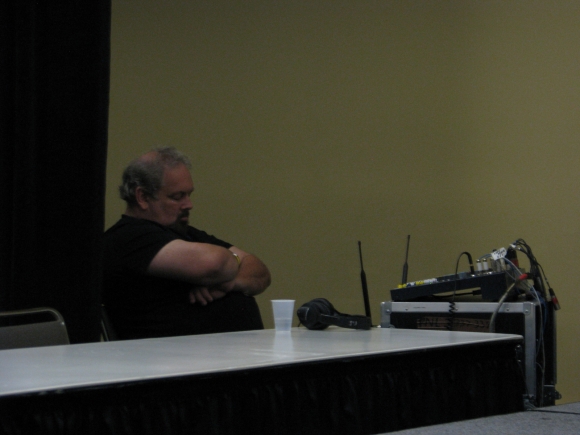 I’m glad I can give the management some praise for turning around an awful showing in 2013, though in terms of content, this year didn’t quite match up. After the Kanno/Watanabe double knockout, Otakon 2014 was unfortunately a year to not get terribly excited about much. One notable Japanese voice actress, two showcase projects that may or may not actually get made, and way too much Sailor Moon means it was easy to tune everything out. ALTIMA turned out to be a great musical guest, though the sort of reverence attributed to any events featuring Yoshiki was a major turn-off when I know it’s already going to be difficult to get to see the things I really wanted to see. I’d love to get to see In This Corner of the World and Under the Dog eventually come out, and the industry people that showed up to promote these titles were great, but it’s hard for me to provide a vested interest while they both sit early in the pre-production phase. I’m not easy to sell on unproven work, and I sincerely hope industry guests arriving at conventions for the purpose of crowdfunding/panhandling doesn’t become a trend.

Panhandling indeed! At Otakon 2014 this year, it was sometimes difficult to tell the difference between the panhandlers on the street and the Japanese industry guests, since both saw Otakon as a golden opportunity to ask a bunch of cartoon nerds for their sympathy, money, or both. Under the Dog (three days to go in its Kickstarter!) was the most blatant example, but even In This Corner of the World seems poised to be the title that teaches Masao Maruyama how Kickstarter actually works; guests working on the film repeatedly voiced their distaste for traditional anime funding methods and mused suspiciously about how they might be able to use their fans for some sort of funding… from a crowd… if only there were a word for that. 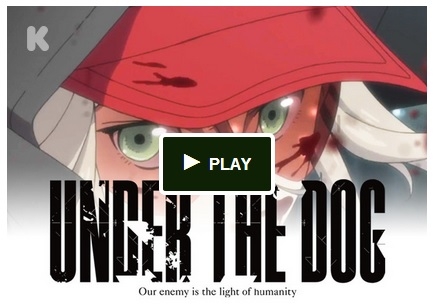 Sure, the guests weren’t huge names, but they brought a lot of really insightful information to the table. Not only was Madhouse/MAPPA founder and producer Masao Maruyama in attendance, but we got to hear about anime directing (and ridiculous levels of background art detail) from Sunao Katabuchi, and character design influences from Yusuke Kozaki and Hidenori Matsubara. Plus, Hiroaki Yura, the charismatic leader of the Under the Dog team, speaks fluent, Australian-accented English, and by sidestepping the translation that so often dulls the impact of Japanese guest panels, he was able to hold a frank conversation directly with American fans, a rare feat at an anime con. As an anime production process nerd, I left all of the guest panels with a big grin on my face, having learned some cool new nugget of knowledge about the inner workings of anime studios. 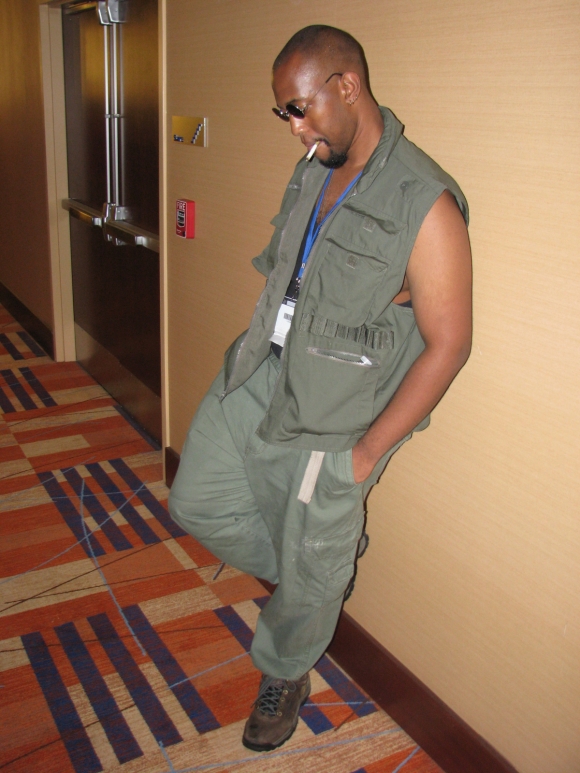 Fan panels at Otakon are so consistently good that it’s rarely even worth mentioning, but the usual folks brought their usual A game, from Anime World Order panels about ninjas and pro wrestling to Mike Toole joints about literal devil cartoons. The most disappointing experience this year was the battle between my stomach and my brain as I crawled Baltimore in search of good food that I could eat fast enough to get back for a spate of awesome panels. Too often my stomach won.

After last year’s disastrous crowd control, Otakon 2014 was an enjoyable return to form. The eight-hour flight from San Francisco to Baltimore (complete with an obnoxious layover) might be a bit too much to justify for any other con, but I wouldn’t miss this one for the world. 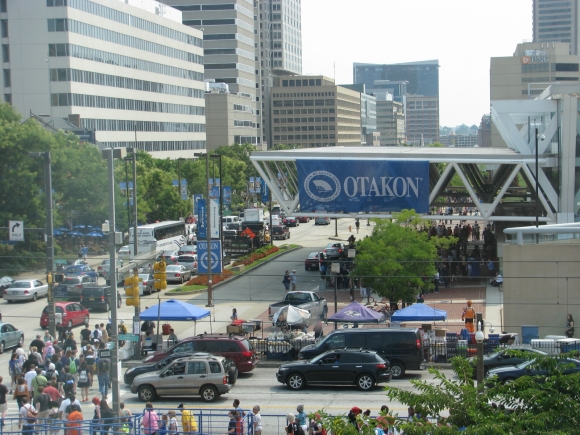 This year’s Otakon, for all its joys, will go down in history as Good Weather Con 2014. Baltimore’s usually a haven for the vile likes of Scorching Heat copulating outdoors in plain sight with its unkind mistress 98% Humidity, but this year was … a set of lovely summer days! Hell, there could’ve been outside panels. Thursday’s matsuri must’ve been great for those who attended. (I missed all events due to dinner and a horrible sense of direction.) Aside from circumstance, the aspects of this year’s Otakon which endeared it to me so were the guests, panels, and organization. 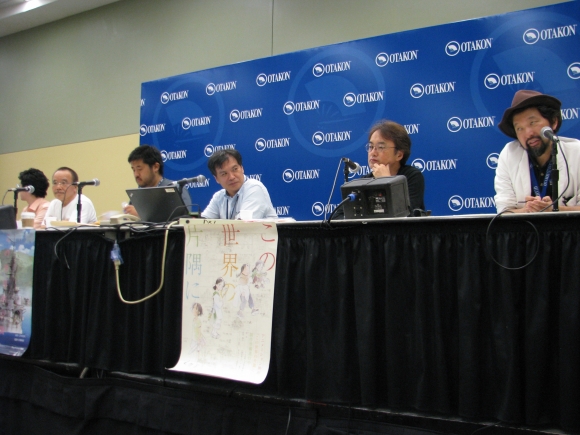 As Evan already noted, the guests weren’t TRIGGER. But the honesty and openness of MAPPA and Creative Intelligence Arts, Inc. representatives concerning their creative processes, their own work, and their own concerns were directly in line with what I saw exemplified during AnimeNEXT 2013 and 2014. Separately in Q&A sessions, and collectively through a panel about their current project, In This Corner of the World, guests Sunao Katabuchi, Masao Maruyama, and Hidenori Matsubara all commented in varying degrees on the importance of creative freedom and breaking the current mould that is the anime industry’s creative committee system. This was further compounded by guests Yusuke Kozaki, Jiro Ishii, and Hiroaki Yura, who started a KickStarter campaign Otakon weekend to attempt to gain funding for a pilot episode of Under the Dog that could be shopped around as evidence of the power inherent in retaining their creative control over the project. I thought this was not only a great excuse for their time over here but also a good test of “put your money where your mouth is” challenge to American fans. 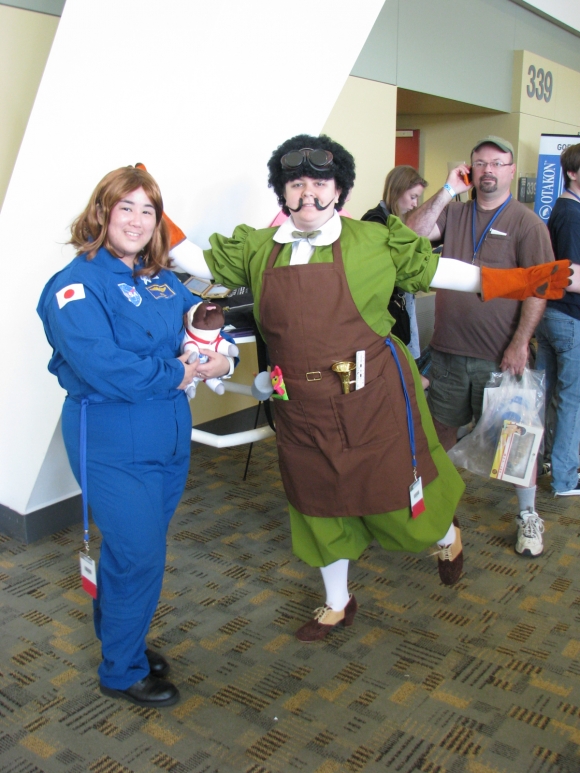 The other wow that left me positively giddy was the adjustments to schedule inclusion, panel scheduling, and traffic coordination. Even before Otakon started, the posted schedule displayed cosplay photoshoots. Whether cosplay is merely window dressing or represents the mainstay of a con for you, the decision to integrate it was a solid one. Panel hopping was facilitated by 15-minute breaks and size-appropriate room allocation. Lastly, regarding organization, a (very short) story: upon walking down the main thoroughfare (where Panel 1, Ota-Chan, etc. were located), I saw Otakon staff walk down the middle of the aisle, turn sideways, then extend their arms to split the hallway in twain. “That’s cute,” I thought, but are they just going to stand there the entire con?” After I came back that way after a panel or other such happening, strap barriers had taken the place of staff. These barriers also appeared in other high-traffic areas, namely the bridge between the adjoining hotel and BCC, and made travel a relative breeze. 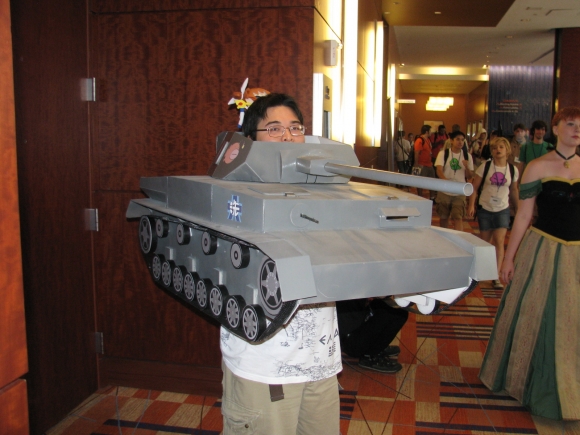