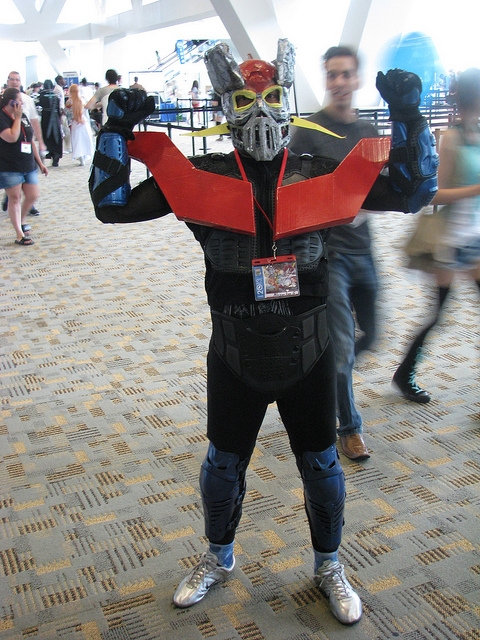 “People have been lining up for Yoko Kanno since 4AM.”

Otakon is only as much fun as you are willing to make it. For those who came to see industry guests, Otakon 2013 had the strongest showing I’ve seen yet, bringing both Shinichiro Watanabe and Yoko Kanno as well as many other fantastic guests that weren’t involved in the production of Cowboy Bebop. If you wanted to meet people from the Internet in the flesh, Otakon was the place — perhaps only second to Anime Expo in its best years. All this and more, from concerts with notable Japanese musicians to a well-ventilated game room. From the sound of things, it would seem as if Otakon 2013, the year we celebrate the twentieth incarnation of the largest American anime convention on the east coast, would be the best one yet.

On the surface, Otakon ‘13 was a triple-A event that, in reality, operated under something closer to double-A, possibly even single-A, management. Against all odds, I had myself a good time, but I didn’t anticipate having to work as hard as I did to enjoy the convention.

To cut to the heart of the matter, Otakon 2013 was staffed by the most high-strung and visibly inexperienced personnel I have had to deal with at a convention. During all three days on the convention grounds, I saw abysmal crowd management, ineffectual communication, and the absolute worst queuing I’ve ever experienced from an organization I assumed knew what they were doing. I’ve enjoyed Otakon for its easy-going atmosphere and bustling movement, yet this year was affected by such an appalling lack of leadership and foresight that difficulties presented themselves in even the simplest things.

If you haven’t spent an hour waiting in line to order a mediocre quesadilla, you’ve missed out on a major part of the Otakon experience.

I almost turned down the offer to write this convention report since I spent most of my time on a line, but thinking about it, standing in line is an integral part of The Real Otakon. For many people, as demonstrated by half-filled Japanese industry guest panels every year, The Real Otakon never takes place inside a panel room. It’s out on the floor, in the streets, during the hotel room parties, at bistros and bars, and most definitely on the lines that form throughout the weekend. If you haven’t spent an hour waiting in line to order a mediocre quesadilla, you’ve missed out on a major part of the Otakon experience. I lined up for Kanno. I lined up for the Dealers' Room. I lined up for Watanabe. Twice. I lined up for lunch. I even lined up for Maruyama! No one ever lines up for Maruyama!

Yes, even Masao Maruyama, a name I’m sure many of the younger attendees encountered for the first time in their lives while flipping through the Otakon 2013 guidebook, had a respectable line for autographs. If you get the chance, allow our editor-in-chief to regale you with a sad story about a Maruyama autograph session from previous years. 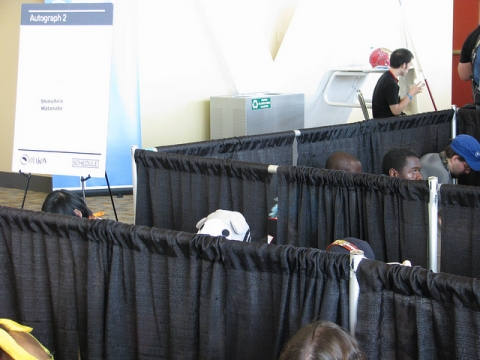 To be fair, the lines themselves weren’t so bad. It was when it came time to move people around that the machine chewed up the gears. I’ll never forget the disastrous Watanabe autograph session on Day 1 in which a cowardly staff member told only the people at the front of the overflow line that Watanabe was done for the day before scampering off and leaving the news to circulate amongst ourselves without any real sense of affirmation. Everyone milled about for a few minutes until someone near the front, an attendee, not a staff member, took it upon himself to announce to everyone that Watanabe was no longer giving autographs. Now, I understand that when both Yoko Kanno and Shinichiro Watanabe are present at your event, a generous amount of shouting and barking at attendees is permissible given the circumstances, particularly in the case of Kanno, who carries such a whimsical aura that it’s anyone’s best guess how she didn’t burst into a swarm of butterflies upon having her photo taken. It’s fine to treat attendees a bit more roughly than usual when directing encounters with such high-profile guests, sure. However, to relish all that gratifying yelling that comes with an authority position only to pass the buck when it comes time give some bad news? Failing marks abound for Otakon staff.

Short walks became treks in and around the convention. For Otakon 2013, inconvenience had been introduced as a form of crowd management.

I’m not exactly sure what the deal was with the administration this year. It wasn’t just me having one bad experience, it was several people, at different places, all being given a hard time by the failings of the staff.  Perhaps the most confounding thing about Otakon this year was not being able to access the Baltimore Convention Center (BCC) through the front doors. Certain people held front door privileges and escalator privileges. Certain staircases and pathways were blocked off all throughout the convention grounds for undisclosed reasons. Short walks became treks in and around the convention as people were rerouted and funneled in nonsensical directions. For Otakon 2013, inconvenience had been introduced as a form of crowd management. This soon revealed itself to be an immense lapse in judgment after traffic in the skywalk connecting the Hilton to the BCC came to a standstill.

As many shots as I’ve directed at the organization of the convention, I probably had it easy compared to regular attendees. I only had to wave my press badge twice: once to a security guard to get through the front doors of the BCC while the senseless door access policy was in effect, and the other time to the least wound-up staffer officiating the ridiculous line to Anime’s Craziest Deaths to get on the six-man-strong press line. I overheard someone say they had been waiting in line since 6PM to get into the panel, which didn’t begin until after 10PM. Do you know how many things are happening all at once during those hours spent in line? To attend Otakon the right way is to accept that you will not see more than 95% of the content on the schedule (if that). Every year, I tell myself to attend more panels, but I attended about three panels in their entirety this year. That does not include Watanabe’s second Q&A, which I had to walk out of halfway as I suffered from acute secondhand embarrassment during the actual Q&A. Please never talk about how many followers you have on Twitter to the guest. 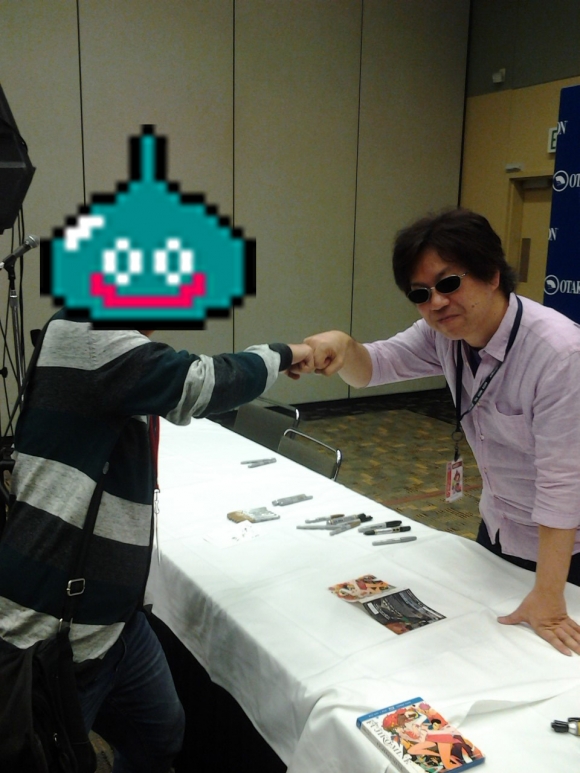 The 5% of the convention that I was able to see? As solid as ever, leaving me wishing I could have at least spent Saturday away from the lines. I’ve never seen the fandom stronger than I have this year. There was a noticeable rise in maturity among the congoers, and not even half the amount of non-anime cosplay from the year before. The Dealers' Room was a wash. This was the year everyone operating a table there got clued into the remarkable news that anime fans carry heaps of money that they can’t burn through fast enough. Consequently, the dealers did everyone a favor and started charging way too much for junk that was already too expensive. This was a blessing, as it kept me out of the place. I’m going to regret missing the Yoko Kanno concert for the rest of my life due to scheduling my return trip during the concert, but most everyone who attended the concert didn't get the chance to shake hands with the composer after she signed a personalized message on their Cowboy Bebop DVD set or soundtrack, so it all works out.

Anime fans only know suffering for their passions, so I suffered willfully to get my Kanno and Watanabe autographs. Before I knew it, the convention was over. I regret not having more nice things to write about Otakon itself. After all, it is one of the few anime-centric conventions on the east coast offering comparable content to a megacon without the oppressive vibe. Baltimore is one of the most accommodating places I’ve been to, and I’ll miss the Inner Harbor when the convention moves to Washington, D.C. Otakon is a massive event, now evidently far larger in scale than the current grounds can comfortably allow. At twenty years, Otakon stumbles thanks to paralytic management, but I’m sure next year, when Otakon is legally allowed to drink, it will loosen up a fair amount and be much more fun to be around. 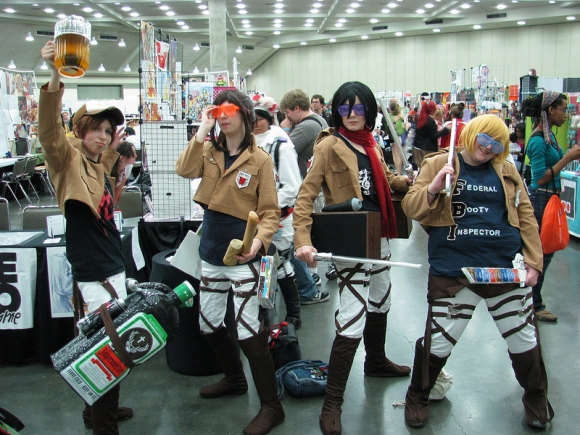