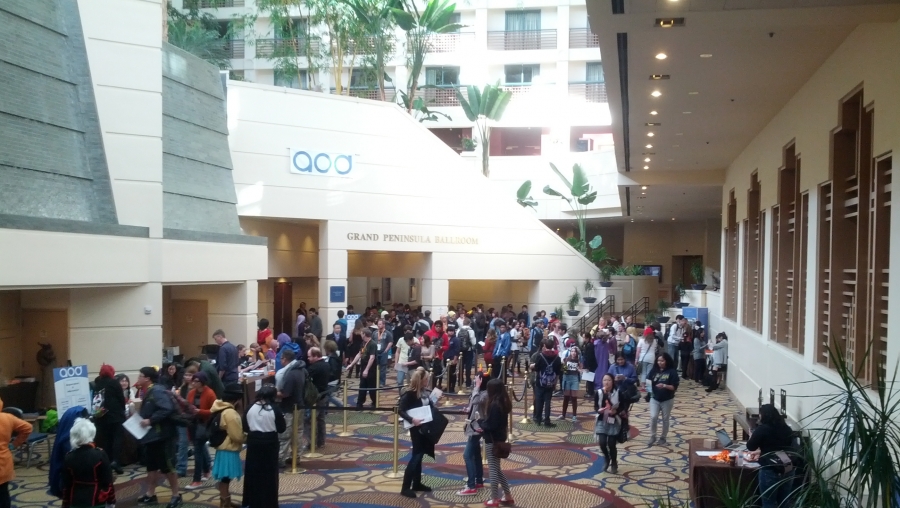 It’s perplexing that Animation on Display is as small as it is. The San Francisco-area convention, which began as college con Anime Overdose, has grown over 11 years into a multi-genre event catering to the whole geek spectrum (hence the new, less Japan-specific name). This year — my first time at AOD and my first time at a West Coast convention — the con had a new, more spacious location near San Francisco Airport and a bevy of big-name guests. Somehow, though, AOD remains a tiny convention, coming in at around 2,000–3,000 attendees over two days (January 25 and 26, 2014).

Typically, the caliber and volume of guests at a convention is a good indicator of its size and influence, but despite AOD’s attendance numbers telling the story of a larger-than-average college con, the event grabbed a lot of great guests. Anime voice actors Cristina Vee and Mike Sinterniklaas were in attendance, as was Yu-Gi-Oh! The Abridged Series creator and Internet superstar LittleKuriboh. Melissa Hutchison, the voice of Clementine in the award-winning Walking Dead video game, and Tommy Yune, an ex-game dev and current Harmony Gold creative director, brought up the video game contingent. Then there was Ken Pontac, creator of Happy Tree Friends, and Noelle Stevenson (a.k.a. Gingerhaze), creator of webcomic NIMONA. That’s a nice list with a variety of guests, but the issues became apparent when I glanced at the schedule.

While the guests had a few interesting panels scattered throughout the convention, AOD 2014’s events schedule was embarrassingly bare. Blocks were filled with barely thought out fan panels in which dubious “experts” answered questions about how to be Internet famous or get a job doing nerd stuff, with only a few going for the unique approaches and level of detail that I look for in panels. Heck, I actually attended the cosplay masquerade at AOD because there was so little on the schedule that appealed to me! 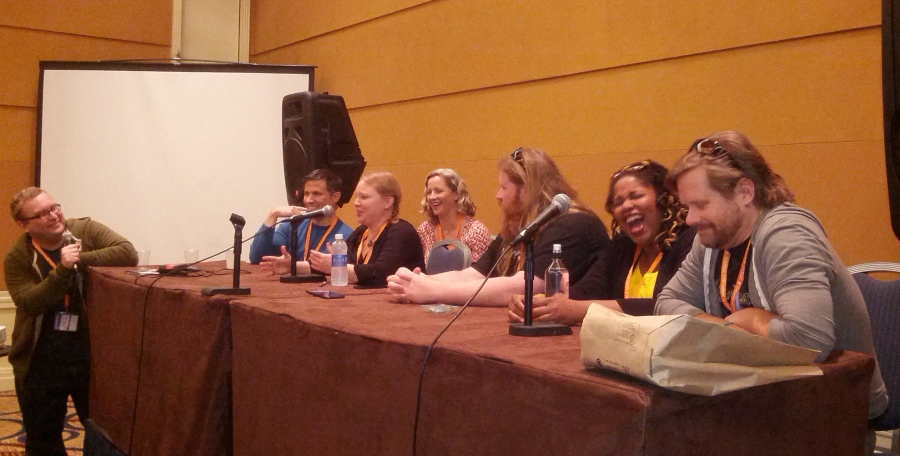 The most interesting events were invariably guest and industry panels.

The most interesting events were invariably guest and industry panels, such as the excellent Walking Dead panel, which featured most of the cast of season 1 of the episodic game series in a frank and funny roundtable discussion. The fan panel "Philosophy in Anime" was a surprisingly fulfilling conversation too, and a late-night block of game show-style panels featuring the guests seemed fun, though I didn’t get to attend. (Also of note: I was on my very first Crunchyroll panel at AOD, which was pretty exciting!)

There was a strong focus on gaming, as the con featured a video game room, a tabletop gaming room, and an arcade showcasing both cabinets and speedrunners playing on a projector. Despite playing a lot of video games, I’ve never been big into gaming events at anime cons. Still, for the multi-genre con geek, AOD provided some nice variety outside of its traditional anime programming. 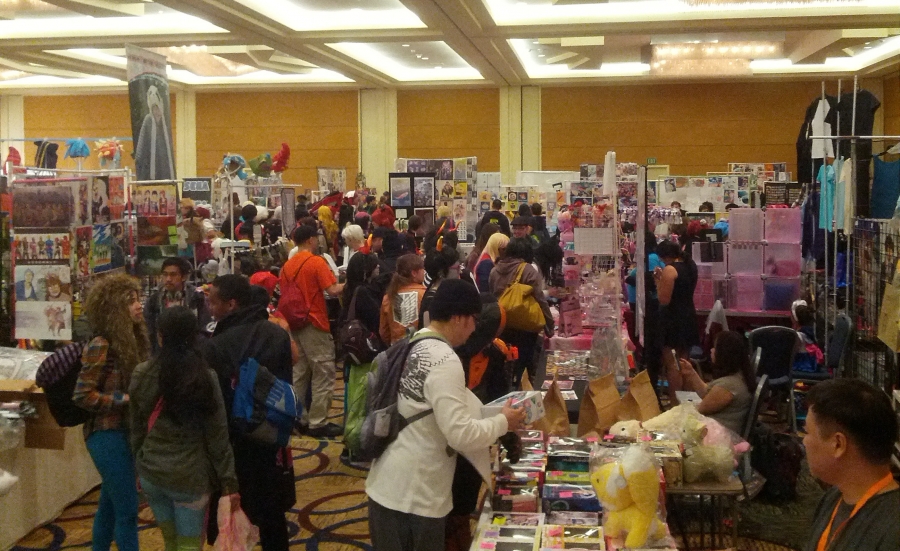 Dealer’s Room and Artist’s Alley were conveniently combined into a single large and centrally located ballroom, and there were just enough exhibitors in attendance to make it manageable but still worth a look. A lot of vendors were selling imported anime products (model kits, figures, accessories, etc.), something you don’t always see at a con of AOD’s size. Unfortunately, my mainstays Sci-Fi Continuum rarely make it out to West Coast cons, so I passed on most of the overpriced anime and manga. However, I did buy some adorable Kill la Kill stickers from fan artist Gus Gutierrez. 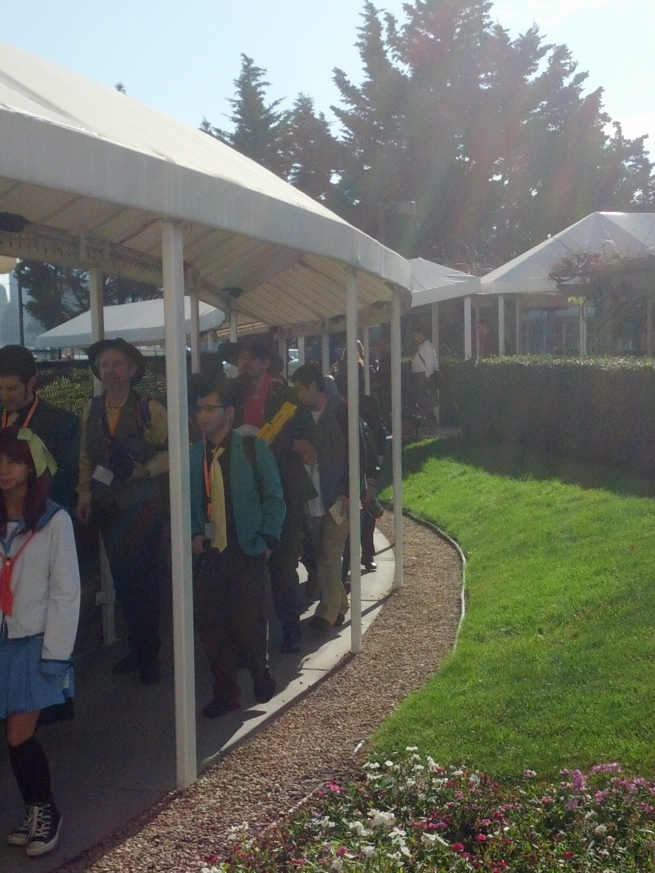 AOD ran smoothly from start to finish, with very few hiccups that I could see. Press registration was a breeze, and when I checked in periodically at public registration it looked extremely efficient, with anywhere between three and ten staffers, depending on the volume of registrations, handling forms and speeding attendees on their way. I never once saw a crowd control issue or an obnoxious panel hijacking by an audience member (something that’s become all-too-common at lots of other conventions lately).

Despite a very well-organized convention and well-behaved attendees, I often felt like something was missing from AOD 2014. Maybe it was the lack of a vibrant and unified con culture, likely caused by the fractured hotel layout that split fans into small groups in isolated alcoves. (I’ve also heard that West Coast con attendees are often more subdued than their East Coast counterparts.) Maybe it was a panel schedule that left me perpetually waiting around for something to do. More likely, it was just my newcomer status. AOD seems like the sort of small convention that lives and dies by the strength of its local community. Attending when you know only a few people doesn’t deliver the full experience, because AOD is much more about hanging out with friends than it is about bouncing from big event to big event. That’s a shame, since the convention staff seem to have the chops to create a much richer experience that blends great guests and events with that friendly local atmosphere.