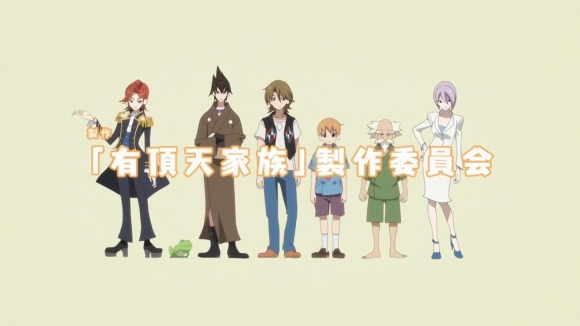 P.A. Works haven’t been around for long but I did like their work on Hanasaku Iroha from 2011. In 2013 they did a show which I wasn’t really paying attention to until after it had started running on Crunchyroll. The Eccentric Family follows the adventures of the Shimogamo family who live in Kyoto and have to deal with the untimely death of the patriarch of the group, Souichirou. The show explores their lives and the other creatures who live alongside them like the Tengu (masters of magic). Add to that the fact that the family are supernatural creatures who look human but are actually Tanuki (Japanese Raccoon dogs) who can shapeshift into anything!

If you’ve never seen any folklore stories from Japan, this is a great place to start. It's full of crazy characters like the Shimogamo who fight, bicker, and console each other, and Benten, a super sexy human who has the talents and magic skills of a Tengu and may have been responsible for eating Souichirou. Benten and Yasaburo (the second youngest of the brothers) have a strange, almost interdependent, relationship with her that borders on the romantic if not for her threats to eat him. Expertly written and wonderfully animated, the show mixes the dramatic with the magical and requires no prior knowledge to enjoy it. Have a gander. It's my pick for hidden gem of 2013.

Crunchyroll streamed the show when it first aired and all 13 episodes are available right now. NIS America announced they have the licence for home video rights and Hulu distribution.

What do you think? Does The Eccentric Family deserve its spot as one of the best anime titles of 2013? Let us know in the comments.