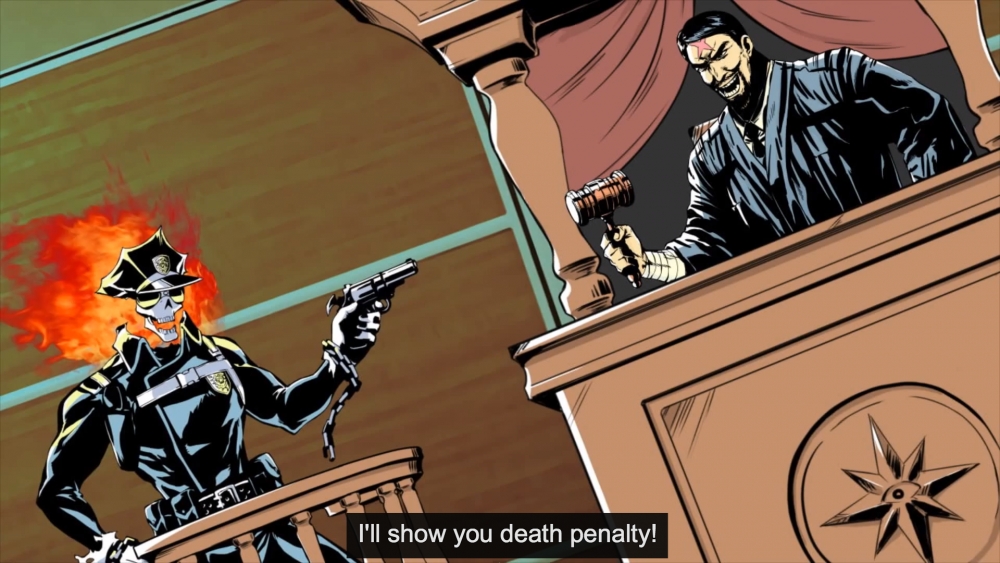 When you're a hardened anime cynic like me, sometimes you need a little anti-anime. And that's exactly what we got, in the form of Inferno Cop, at the tail end of 2012 and the beginning of 2013. Created by the newly formed Trigger, a studio made up of ex-Gainax artists and led by Hiroyuki Imaishi (Gurren Lagann, Panty & Stocking with Garterbelt), the series breaks all the rules in all the right ways.

Calling the animation "limited' is charitable. Character movement is comprised of the animators sliding still drawings back and forth, shaking and spinning them to show action and emotion. Also, multiple characters use the exact same drawing, reskinned with a new costume (or not) for their new circumstance. As if that wasn't evidence enough of comical laziness, episodes are a mere four minutes long — appropriate for their YouTube broadcast medium. Despite (and in many ways because of) this meticulous attention to being completely awful, Inferno Cop turned out to be one of the most consistently funny series of 2013.

And boy oh boy, the comedy. It's totally non-sensical, featuring such gags as a character who transforms into a race car out of sheer willpower, a pregnant woman dressed as Marvel's Scarlet Witch (but never acknowledged as such), and even an appearance of "Real God." The story is something or other about a guy who looks like Ghost Rider fighting a bunch of criminals, but let's be honest: you're not here for the plot.

Inferno Cop is anime, but its entire existence defies the expectations of the medium — Internet video rather than TV/movie/home video; non-animation rather than stylized movement; and vulgar, self-aware nonsense rather than pandering nerd comfort food. In other words, it's "anti-anime." Inferno Cop is an eye-opening work of unadulterated low-fi insanity, and it is absolutely my favorite anime series of 2013.

Inferno Cop is available (legally) on YouTube through the AnimeBancho channel.

What do you think? Does Inferno Cop deserve its spot as one of the best anime titles of 2013? Let us know in the comments.