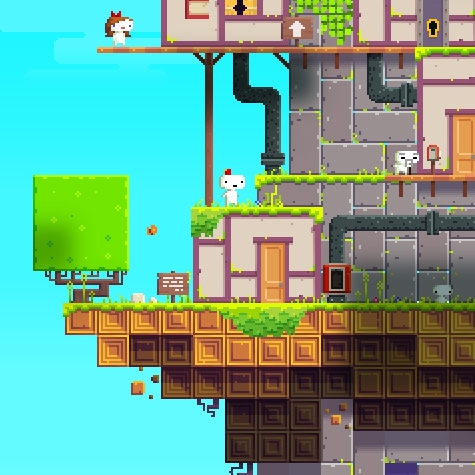 An oddity of innovation, puzzle-platformer Fez honors 8-bit games of yore without resting solely on pixilated mimicry. The story starts when an utterly alien hexahedron appears to Gomez, a two-dimensional creature in a two-dimensional world, and grants him a magical fez that lets him perceive and move about his two-dimensional world in three dimensions. By using his newfound ability of dimensional exploration, Gomez unwittingly shatters reality (and the hexahedron) and is instructed by a hypercube to retrieve all of the scattered pieces. All that story is necessary, because the brilliance lies in the complimentary gameplay. Players can rotate the world in 90-degree increments to explore a flat-faced, three-dimensional world. The same perspective shifts also take advantage of the world’s lack of depth to afford movements that would not be possible in a 3D world. Fez’s scenario and mechanics thus work hand-in-hand as homage, geometrical in-joke, and a brilliant new way to leverage an outdated aesthetic.