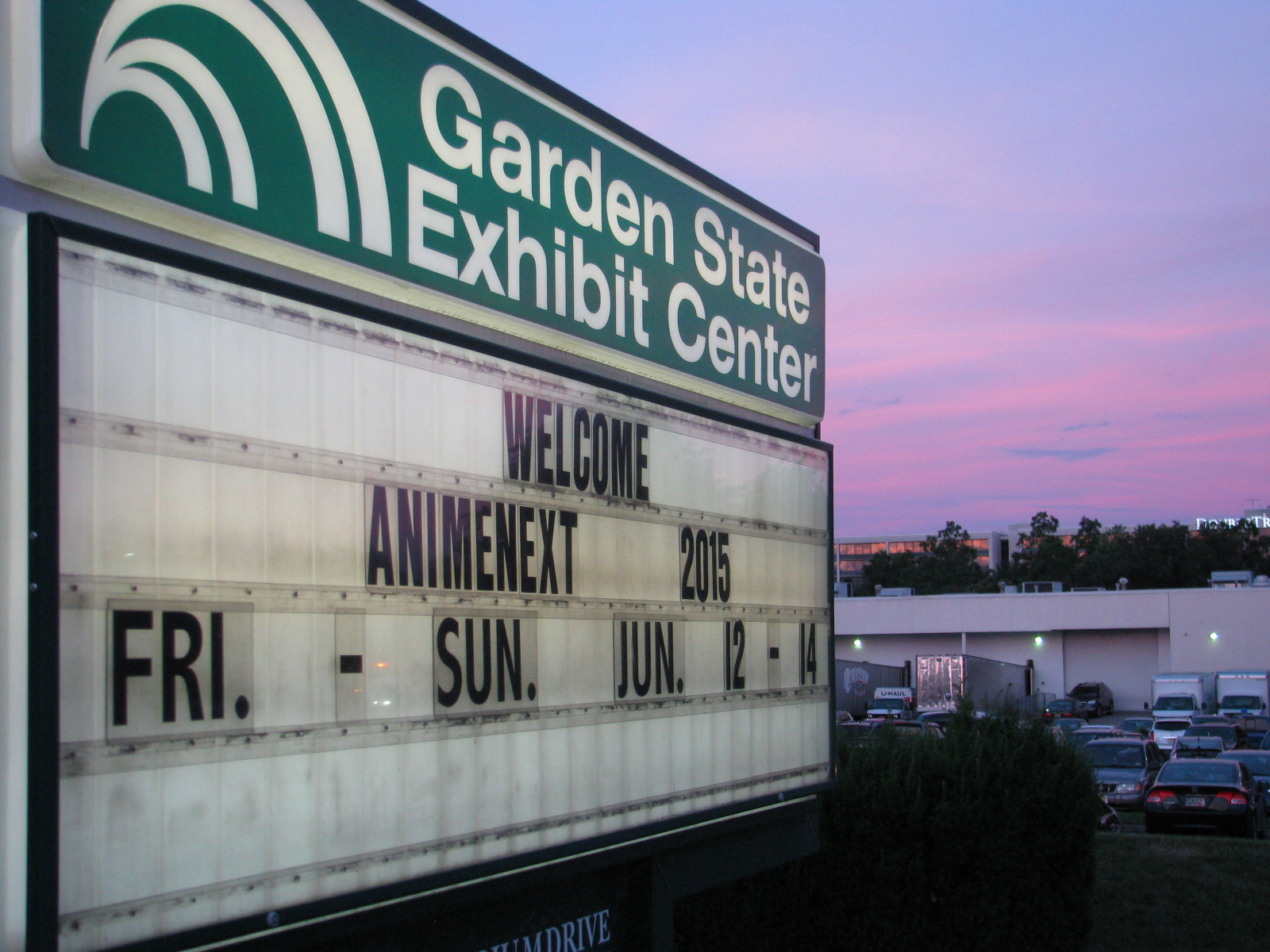 As the sun sets on AnimeNEXT's final stay at the Garden State Exhibit Center, all three Ani-Gamers present for the con say their peace on what this particular year got right as well as what went wrong and give their opinion on the con's upcoming move to Atlantic City. 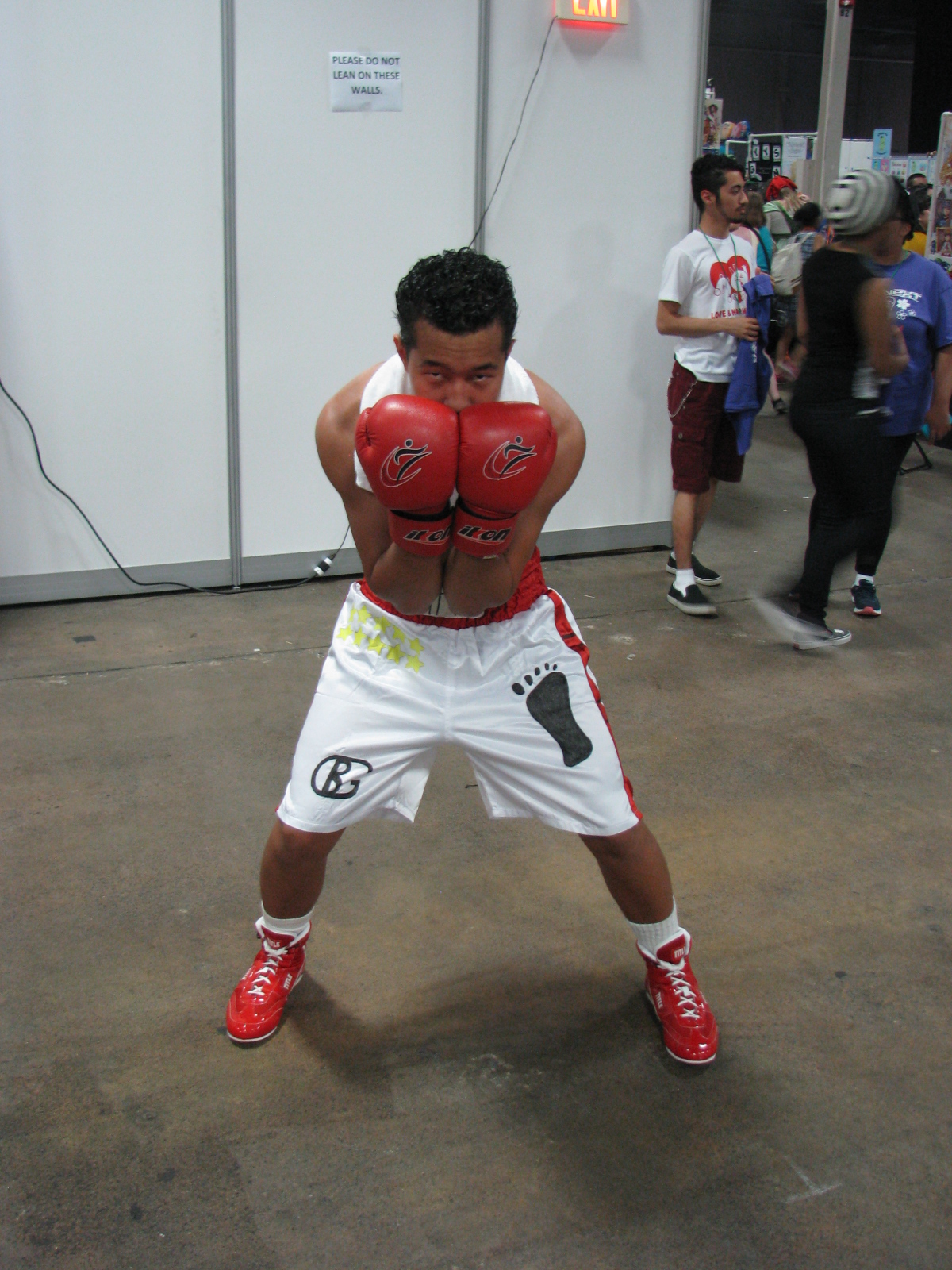 When you live in New Jersey, you come to accept certain truths: no-one from outside your home state (and even some therefrom) will ever get what a jughandle is or why it’s absolutely necessary; before meeting you, everyone will assume you speak with a Long Island accent; and living in the most densely populated state in the USA means waiting … for everything … and on the way to everything. Commenter omoikane once referred to Otakon as “line-con” in response to David’s line-themed take on Otakon 2013, and that is what AnimeNEXT has turned into as well.

An estimated 14,500 warm bodies were present at this con. The combined capacity of the five similarly sized panel rooms was ~650, and two other rooms, Panel 1 and Main Events B, respectively added 250 and 500 seats. With standing room eliminated from panel rooms in order to meet fire code capacity regulations (duly and efficiently enforced), those figures added up to a lot of waiting in vain for most and a lot of immediate disappointment. Scheduling panels, even those featuring guests, that tend to draw major crowds in tiny rooms seemed like Yoko Kanno’s arrangement with Otakon. (She only wanted to perform for an intimate gathering of people.) Certain guests went so far, after seeing the size of their rooms, as to tweet at attendees and urge them to either line up early or have a backup plan. 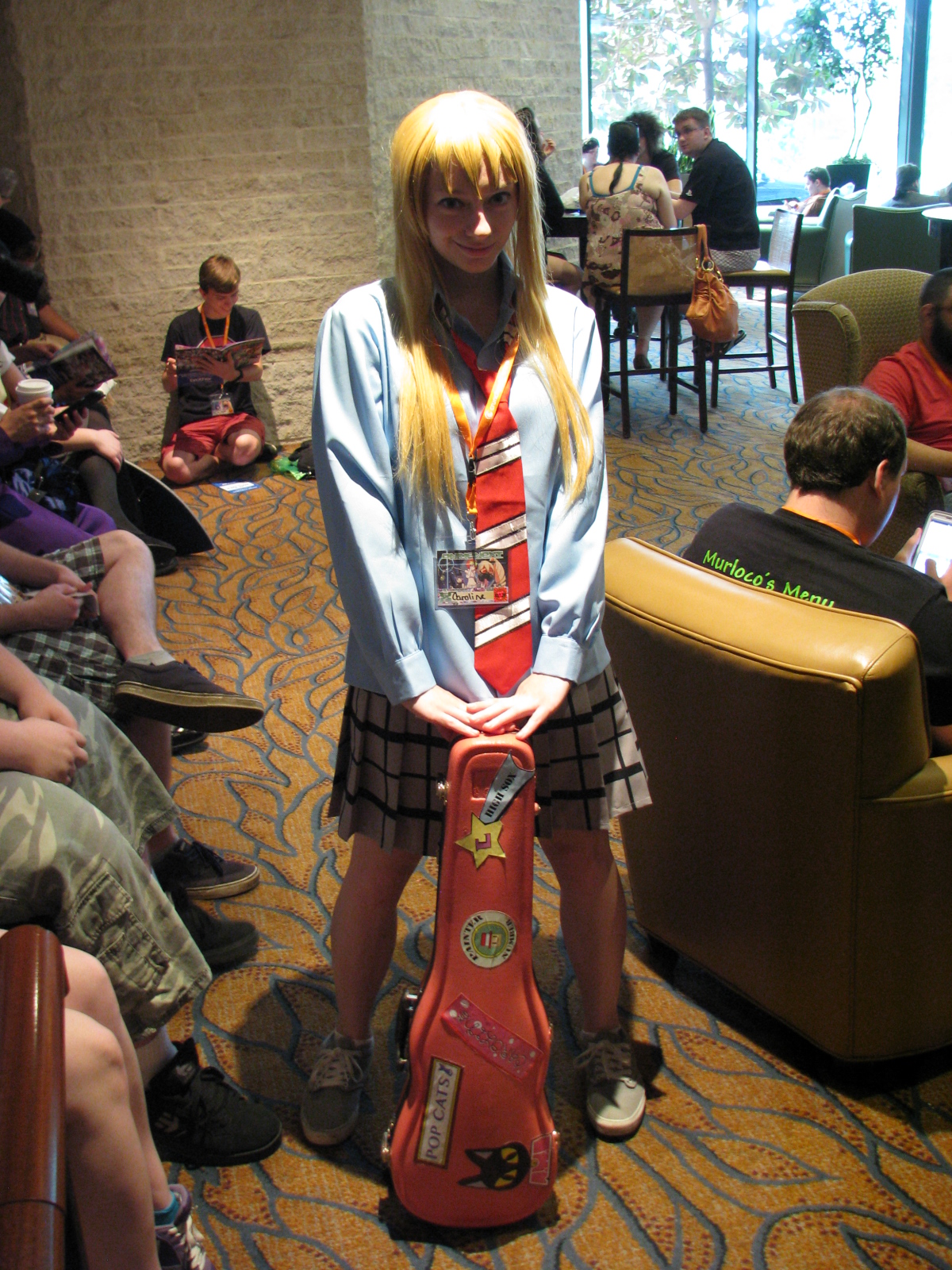 Thankfully, programming at AnimeNEXT has also evolved to the point that there’s always something to do. At previous iterations, open blocks of time allowed for the fifteen-minute drive into nearby New Brunswick for great food, leg stretching, and a breath of literal and figurative fresh air. Now the abundance of enticing panels, guests, events, and (if all else failed) videos made enacting a backup plan so easy that forgetting to eat was a thing. First choices may have filled up quickly, but with multiple attention draws happening at any given moment, I don’t think many would be able to claim truthfully that they were bored at any given time.

To eliminate space congestion issues, AnimeNEXT is, like Otakon, moving to a new location. Unlike Otakon, AnimeNEXT is moving in-state and immediately. Effective 2016, AnimeNEXT will be hosted by the Atlantic City Convention Center — some two hours southeast (by car) of what was its present locale. The good ol’ Garden State Exhibit Center has felt like it’s been filled past bursting for years now, but that’s just typical Jersey to those of us who leave our condos, townhomes, trailers, and McMansions to geek out “across the street” for the weekend. This commuter con has served those of us in Central Jersey well and for years, but we all have a breaking point. The move is as unavoidable and necessary as it should be welcomed. After all, even the supplementary Bridgewater hotel, implemented just last year as a stopgap panel overflow space, became overrun and bulged this year with more otaku than any one wholesome suburban building should ever be forced to hold. 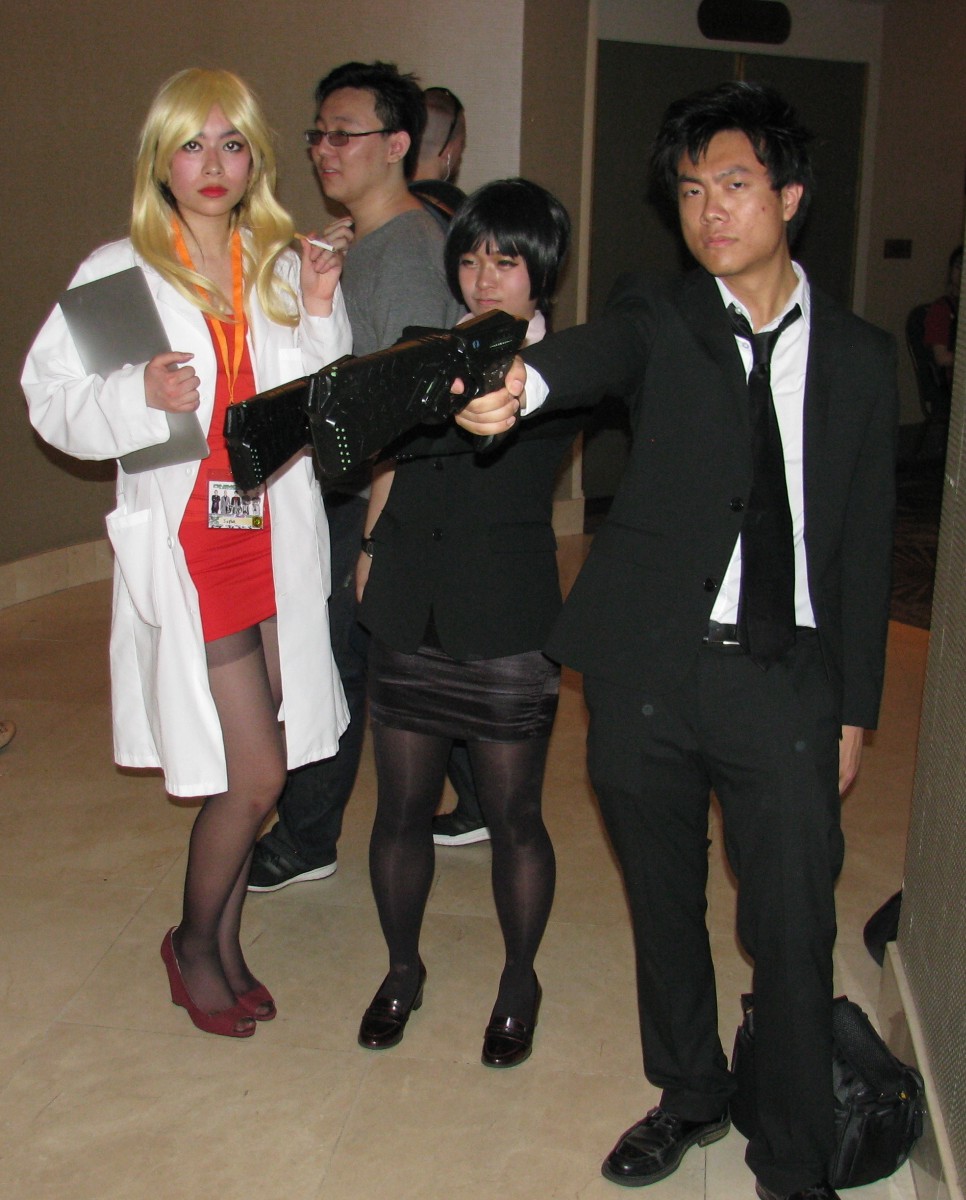 Atlantic City’s a trip to be sure, but like so many I overheard explaining to their complaining companions, I feel the need to stress the following: the nature that defines the Garden State’s outdoors is not going away (there’s an entire beach on which to play); all the programming will be under a single roof, negating problematic migrations betwixt disparate buildings and over a certain bridge; and weather, short of biblical flooding, won’t prove problematic in any fashion (or to any fashion) throughout the entirety of the con. And aside from all that, reasons to faithfully follow and attend this con are the same they’ve been for years. It’s a con run by people who are legitimately passionate about flying in the best guests, providing the best programming, and having a ton of fun. I’ll miss my hometown con, but only until I attend it again next year … in another town. 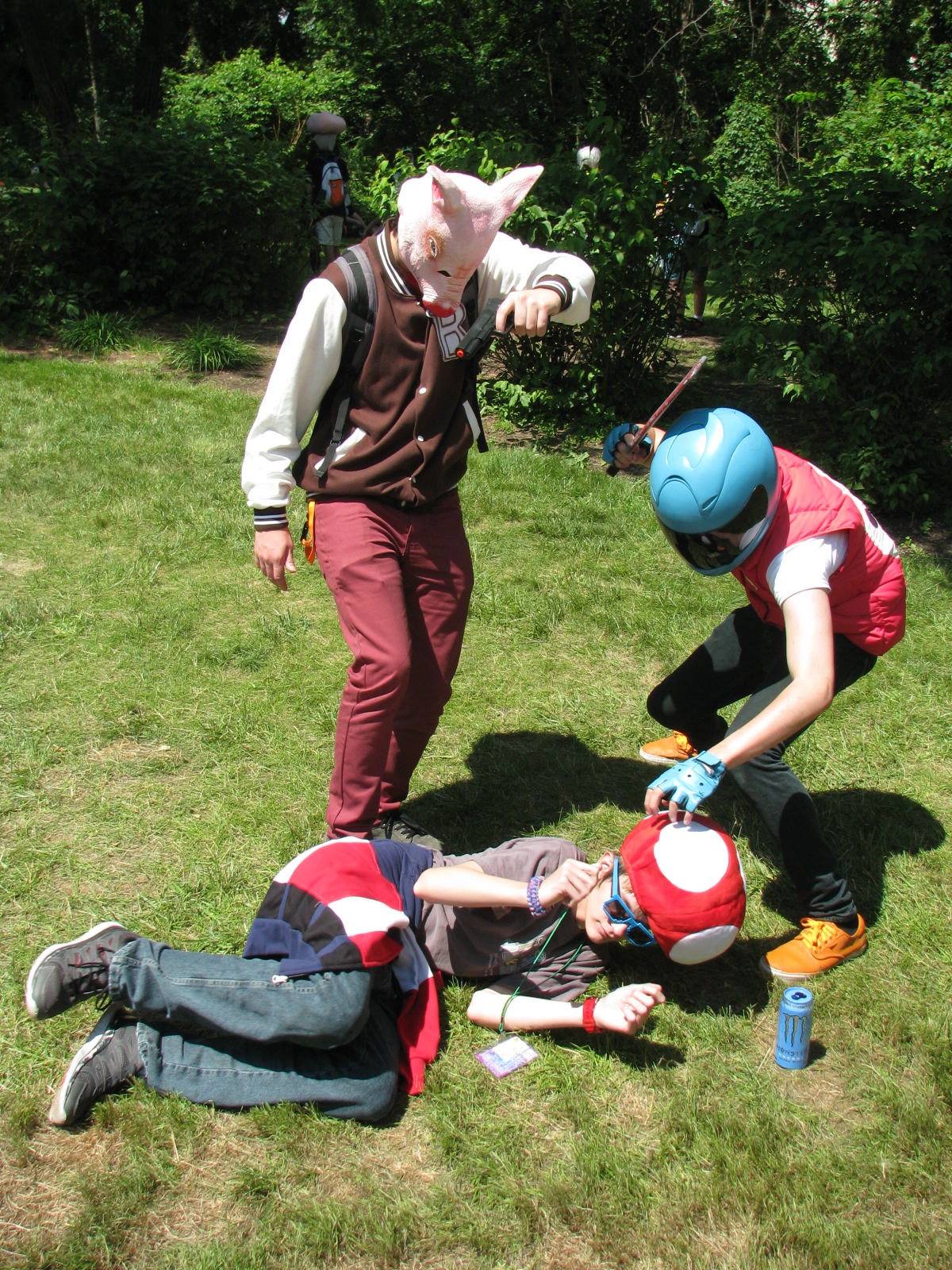 Between work and personal commitments arising during the weekend of AnimeNEXT, I was only around for Saturday. Fortunately, most of the good stuff was scheduled on that day, so that meant the hours flew by and it felt like I got more out of one day at this con than whole weekends elsewhere. One second, I’m running around for a press badge with minutes to spare before a conference with Trigger, and in the next moment, I’m hearing the hard truth behind the production of Trigger’s incomparable Turning Girls web animation. All the while, I’m thinking if I should line-up afterwards for Aya Suzuki’s Women in Anime panel or if I have the chance to squeeze in a dealer’s room run before or after lunch, all things I need to consider early on to account for how long it takes to get anywhere between the Bridgewater and the DoubleTree. 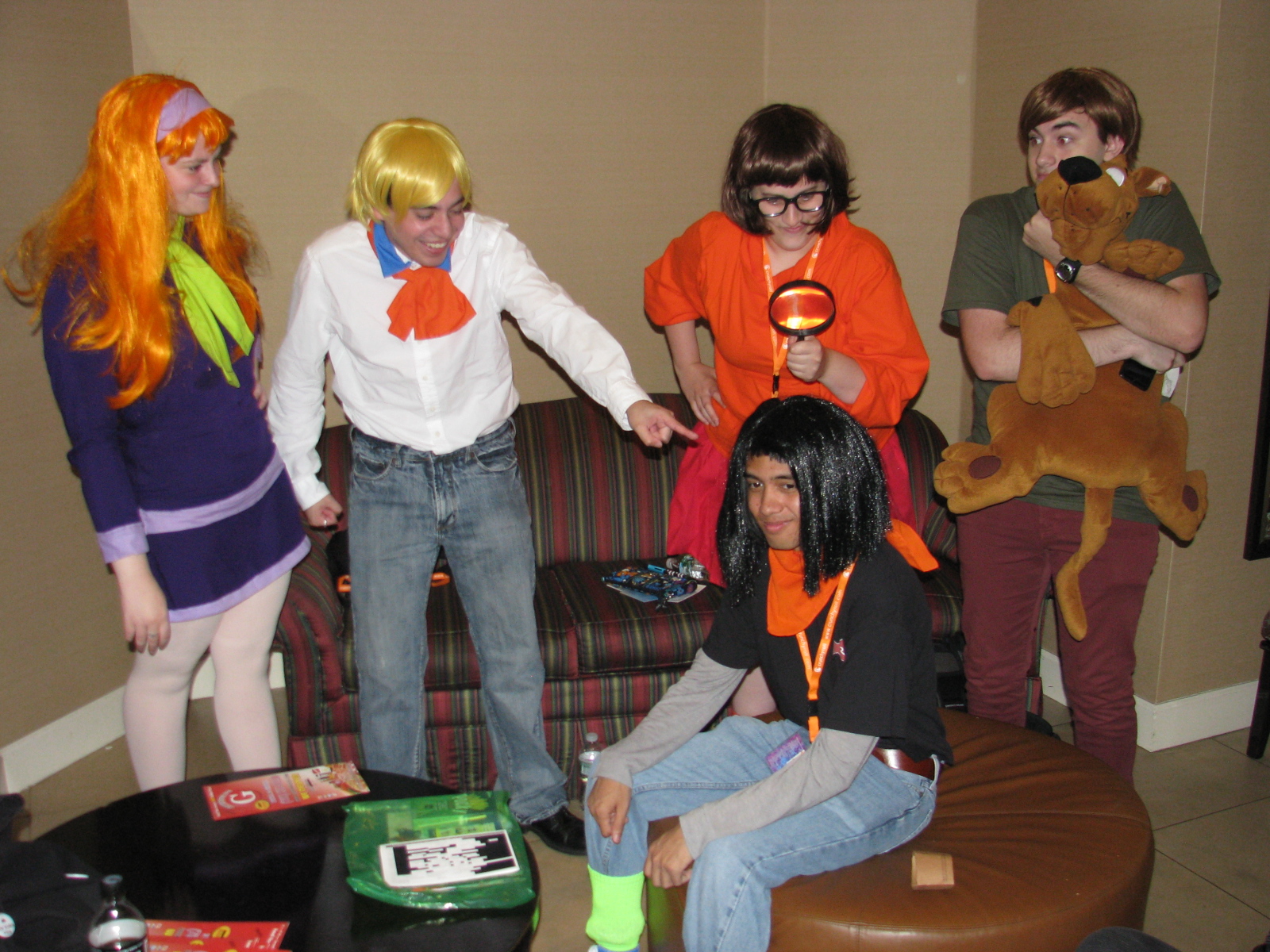 If I make it seem like I was in a rush throughout the day, I really wasn’t, I just had every block of time during the day accounted for with something going on, whether it was a panel or an indulgent mid-con shower to scrub off the Jersey funk. Maybe it was a heightened awareness of the clock ticking down on my shortened stay at AnimeNEXT but I never found myself kicking rocks, waiting out dead time between events. I did spend a lot of time waiting on line but what did I expect from attempting to make it to as many of the most popular attractions of the day as I could? It would be unfair to say AnimeNEXT is a linecon since it’s missing the spirit of a real linecon where a two-hour wait for lunch is “reasonable”. 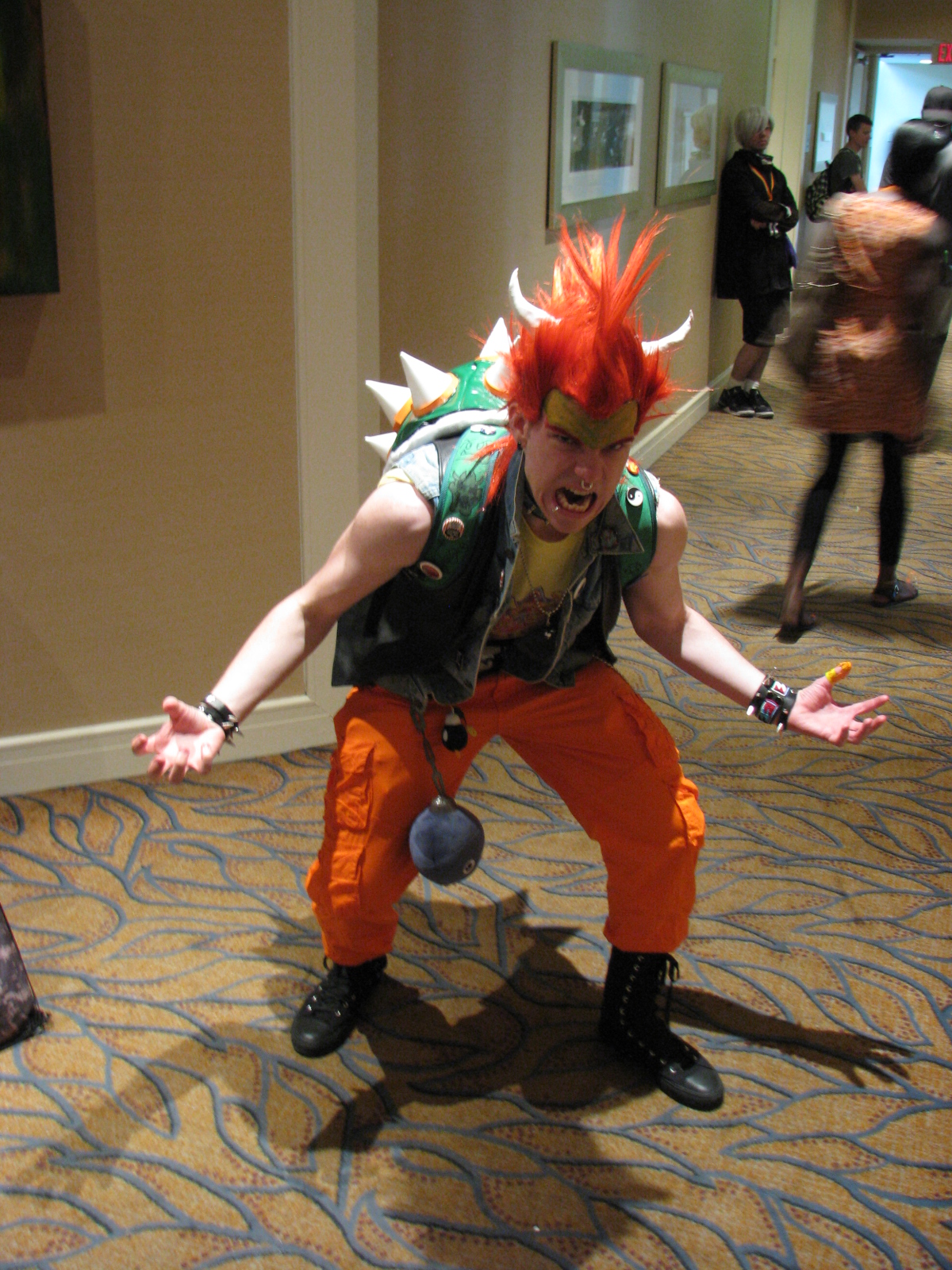 The reality is that there is no lunch to be had at the convention center, or any food in general, unless you have a liberal definition of the concept of food and are willing to risk a detour for a slice of con pizza in the far reaches of the dealer’s room. This is only my second AnimeNEXT at the Garden State Convention Center, but as the last to be held on those grounds, I can say that I definitely won’t miss the venue too much. Having survived an autograph line in a narrow hall with broken AC, it’s obvious that it’s time to relocate. Line management was not the best, especially for panels at the DoubleTree, with staff mainly concerned for keeping the spaces clear and leaving the herds accountable to form their own line. Of course, none of this matters since next year is a whole new venue with plenty of opportunities to impress or disappoint, so consider this year a write-off. 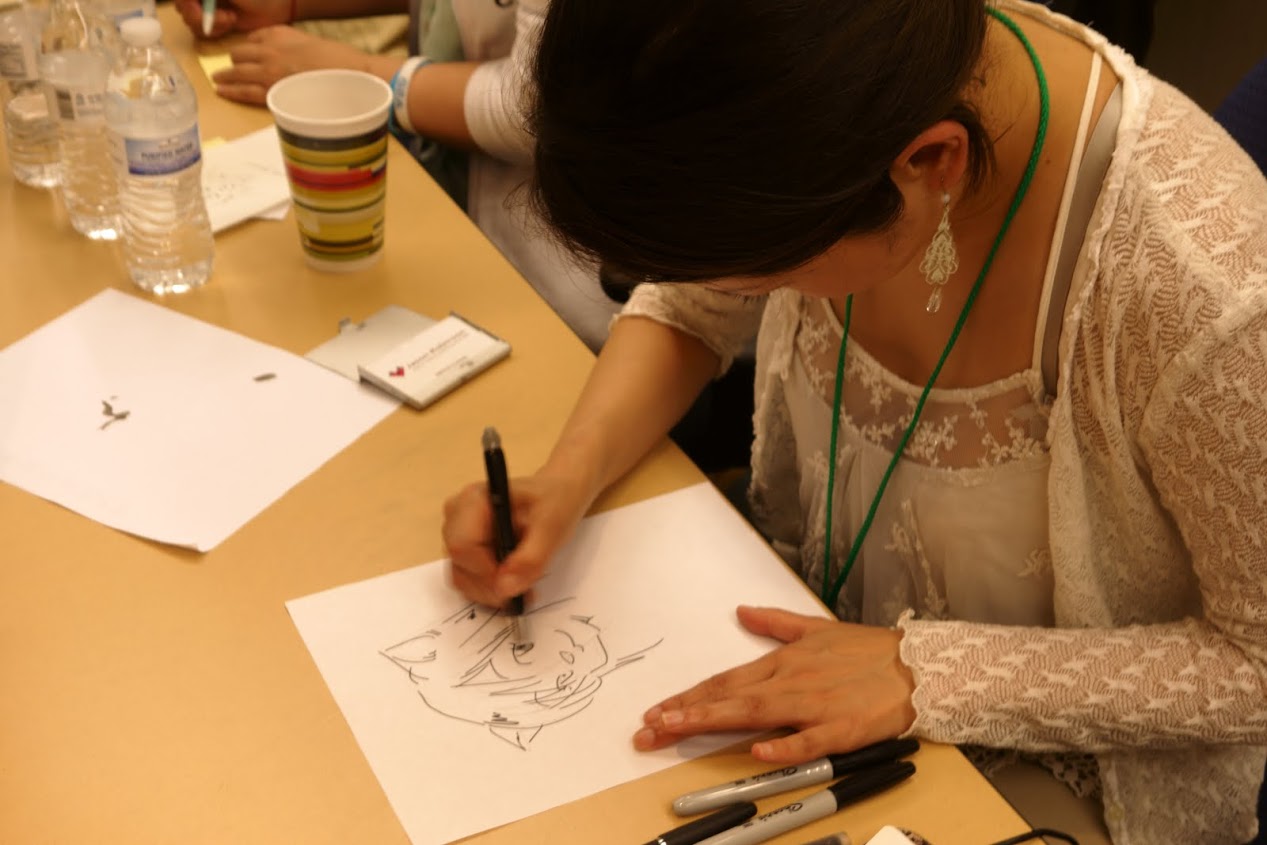 I only got the chance to do about three can’t-miss things, but that’s just typical of a convention that’s gotten to the size it’s become. This is realistically the last year in which AnimeNEXT could be comfortably held in Somerset, and as wary as I am of the move to a dodgy place like Atlantic City, I completely understand the motives. While I can say I am excited at the possibilities for a new location for this rapidly growing con, I can’t say I’m looking forward to taking the party bus with all the retirees headed for a wholesome weekend of penny slots and eating casino buffet for breakfast, lunch, and dinner. 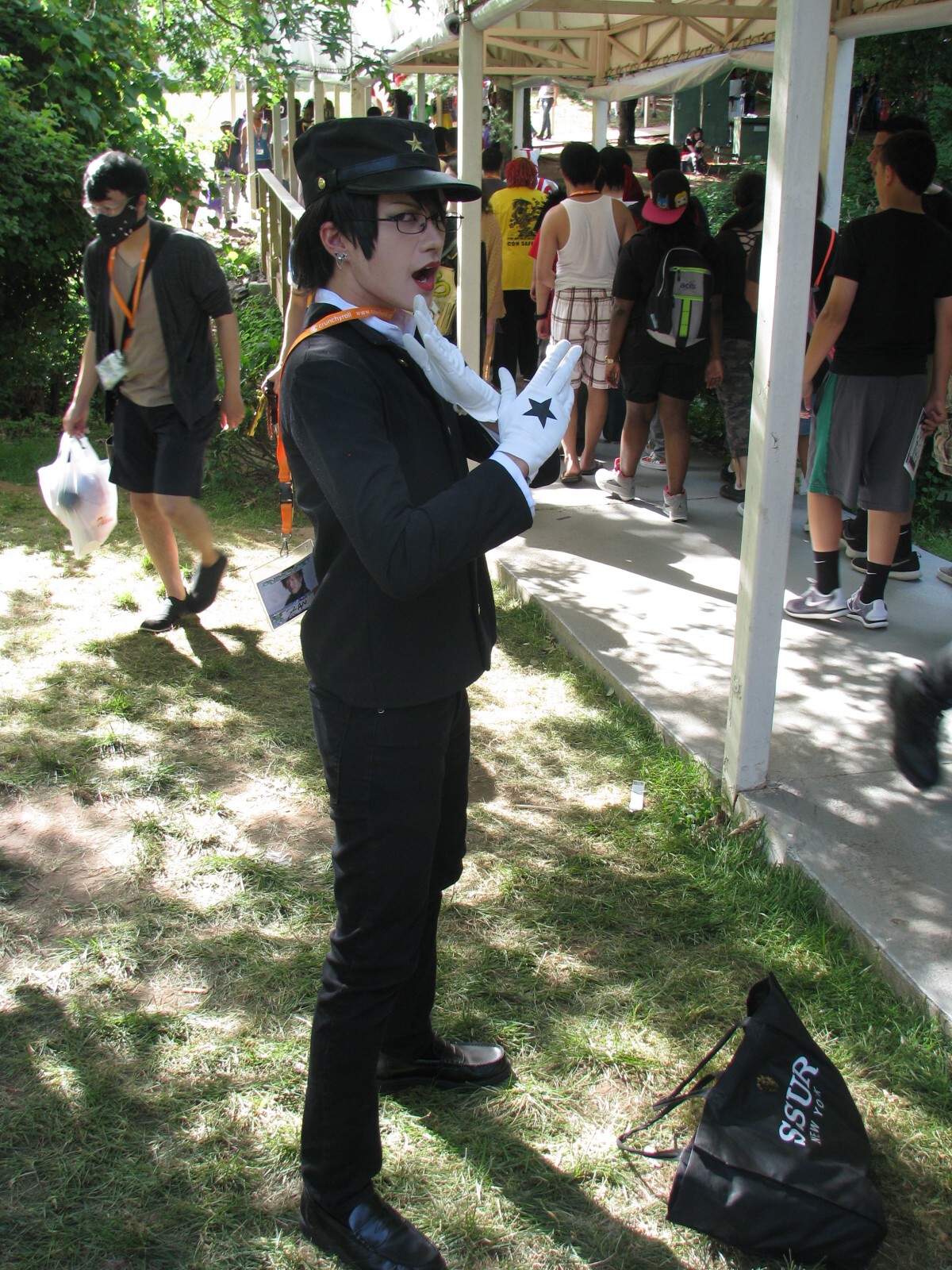 For years I’ve been calling AnimeNEXT “Mini Otakon,” since it attracts a similar crowd in terms of demographics and panel programming. I can generally count on the New Jersey convention to provide a solid, if not remarkable lineup of interesting panels and guest events, with a good mix of new-school and old-school fans milling around the lovely grounds of the Garden State Convention Center. This year, however, AnimeNEXT is feeling a lot more like “Otakon” and less like “Mini Otakon.”

There were so many events going on simultaneously that I found myself pulled in two to FOUR different directions at any given moment, forced, for example, to choose between two panels on “Victim Consciousness & Disaster Anxiety” and animation mistakes in anime as well as an autograph session with Studio Trigger staff and UK animator Aya Suzuki. Speaking of those folks, NEXT also upped its guest game, bringing a number of high-profile behind-the-scenes anime industry folks from both sides of the Pacific (translator Neil Nadelman was a guest in addition to the Trigger folks). 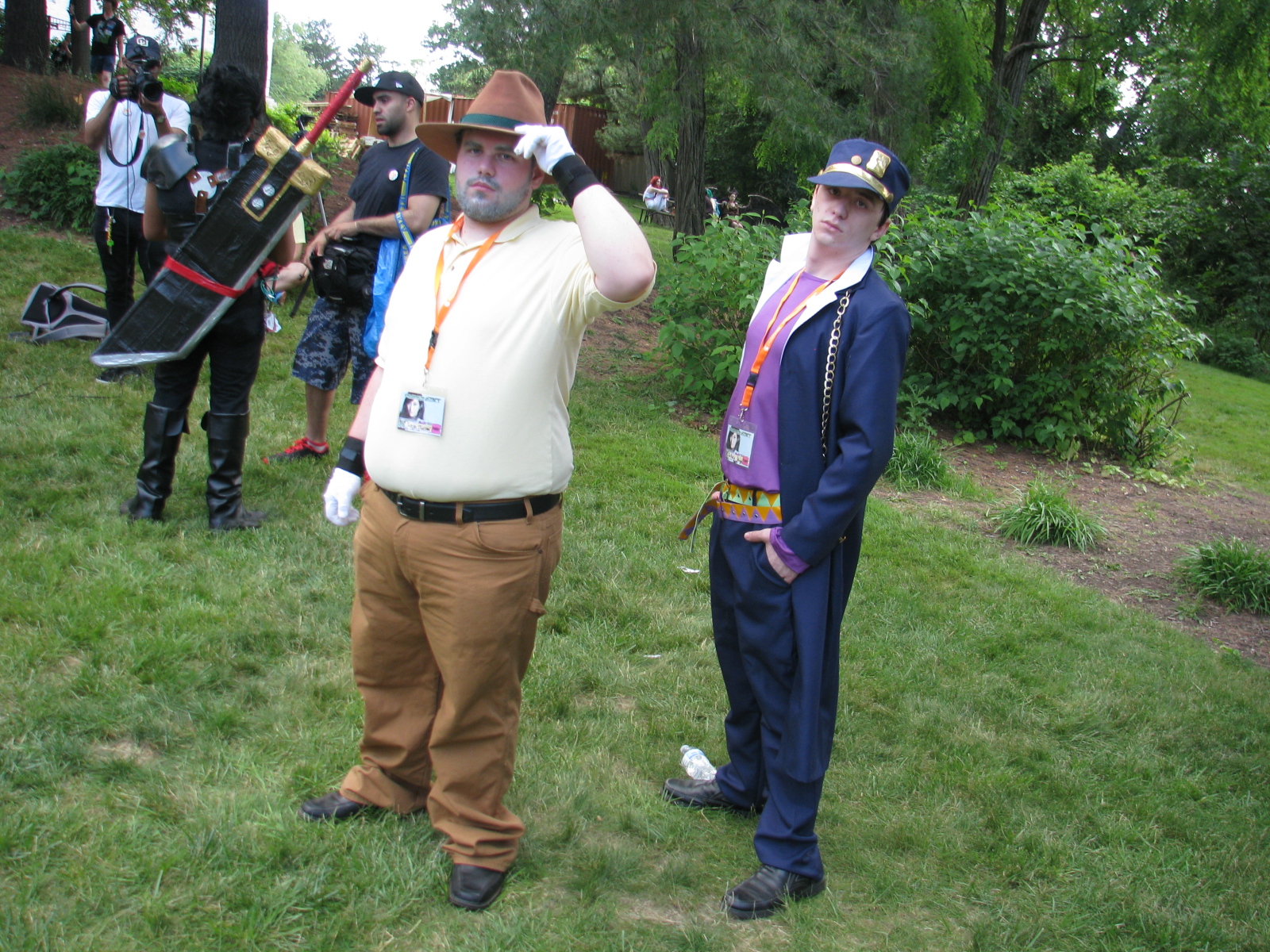 Unfortunately, the convention center isn’t equipped to handle the number of people that has accompanied this shift to more dense, high-profile programming, and the convention is suffering for it. Trekking across a footbridge to the other side of the highway in 90-degree heat to go from one panel to another was enough to discourage me from attending a lot of really cool events, and travel between rooms and building was generally a nightmare due to the large crowds.

My fellow Ani-Gamers bloggers have already covered the line situation, but what I noticed, moreso than the congestion, was the inconsistency in staff policy. Some staff handled lines very well, calmly and politely explaining policy to attendees to minimize bitterness and disappointment for those who arrived too late to attend their favorite panel. Others panicked at the sight of groups of people in a hallway and told everyone to clear out, despite other similar hallways which allowed overflow lines (to be fair, there may be other considerations, but to attendees it appears rather arbitrary). This is a very common problem for conventions dealing with space constraints, though NEXT has had these issues for years, so it’s strange that they haven’t smoothed them out more. 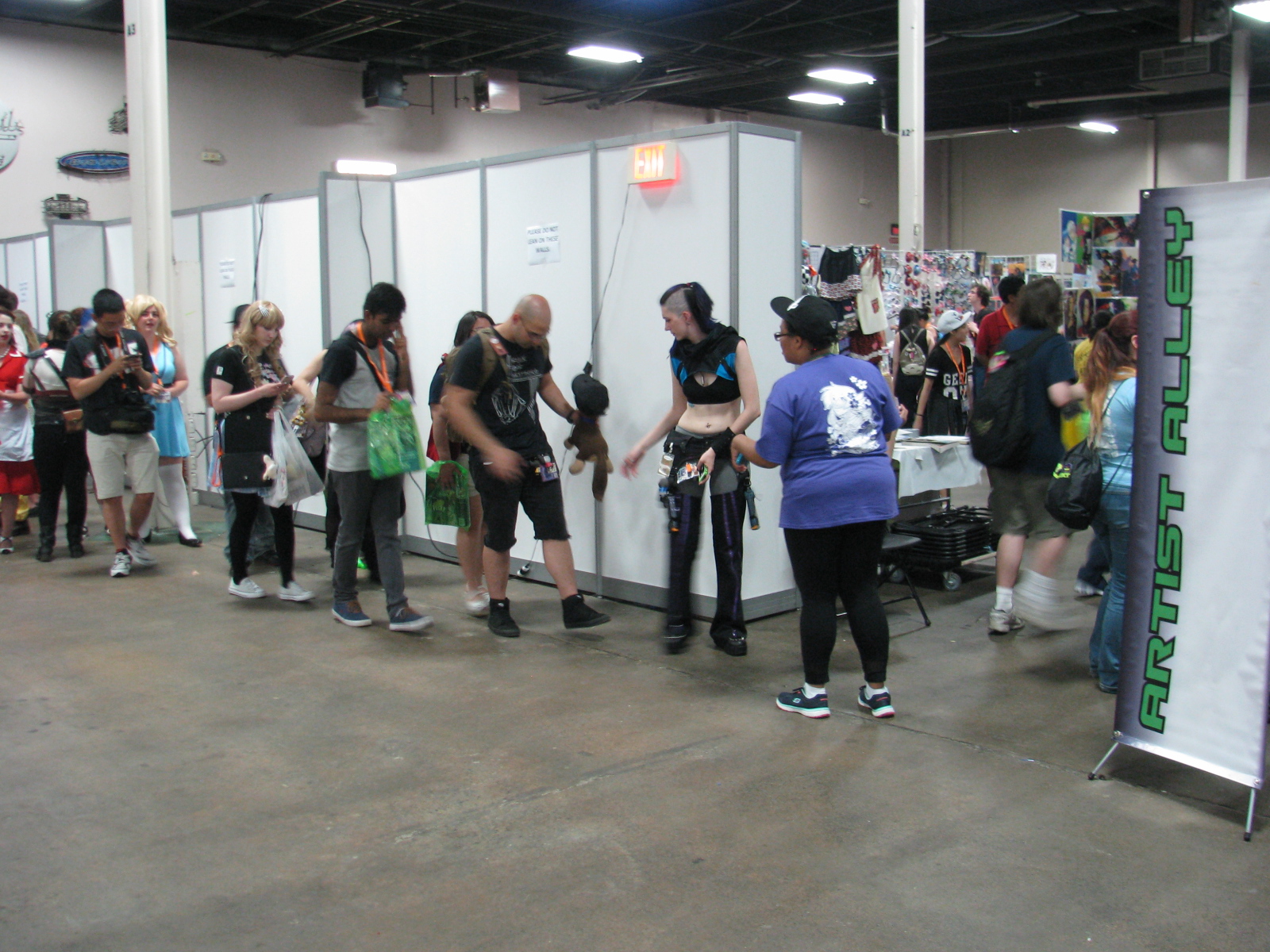 Luckily, next year AnimeNEXT will have much more space, as it’s moving down to Atlantic City. Despite the huge crowding issues this year, I’m incredibly impressed at how much the convention has grown, both in size and in the quality of its programming. I missed it last year, but it was worth making the flight back this time.

Read more of our coverage of AnimeNEXT 2015.