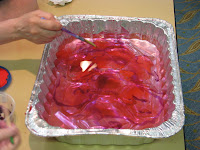 We were out of the picture for a little while, so here is one of our articles from 2011 that we never got around to posting. Enjoy!

As panels at AnimeNEXT 2011 were also assigned to workshop-designated rooms, it was impossible to tell what "Suminagashi: Floating Ink" would be before attending and without reading the program guide. I was late due to hanging out and talking with others after the previous panel, but it turns out I didn't miss much in the way of exposition. When I first stepped inside, I definitely saw a workshop in progress. People were sitting in pairs at tables that bore shallow metal trays filled with what looked like colored water. To find out exactly what it was I had stumbled into, I asked one of the panelists who was circling around the room helping those at work.

While the art’s origins are debatable, “suminagashi” is the oldest known form of paper marbling — decorating paper by laying it atop a shallow bed of water laced with inks and can be traced as far back as 12th century Japan.  As explained to me by the aforementioned panelist, the process of letting paper absorb the patterns of ink was used by monks to help extend the lifetime of handwritten scrolls so they would not need to be as frequently copied due to threat of deterioration.  Reading up more on the matter, suminagashi emerged as an art form that involved gently blowing, fanning, or using a single human hair on the ink to create intricate patterns and spread worldwide in myriad fashion and form. 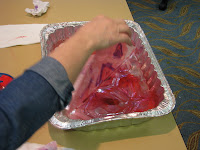 Most of the people at the workshop did not seem to be taking as much care with their projects (of course this was only an hour workshop). Instead, they randomly added ink spots here and there in their shallow pans of water and used a small paintbrush to make large strokes and patterns like so much modern art. Even though this produced naught but colorful Rorschach tests and tie-dyed shirts for paper dolls, the results were always quite fetching. Watching the process of con-goers-turned-painters trying to bring their own visions of patterns to life made me, after reading about the skills employed in eras gone by, nostalgic for the image of the lone artisan matching wits against the will of water, the ink's surface tension, and his or her own skilled hand.

Suminagashi seems an enviable art of patience and skill equally open to abstract painter and hobbyist. If you'd like to try your own hand at suminagashi, there's a detailed how-to here, and of course the Wikipedia page has tons more info than I've relayed here. Just wanted to wet your appetite! 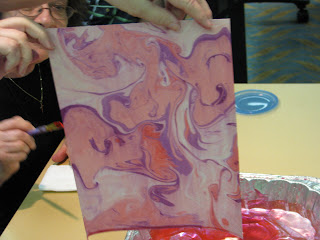