Celebrating 25 years of Akira in English-speaking countries, the Akira Yearbook gathers opinions, thoughts, and expressions on Katushiro Otomo's seminal classic throughout the month of August. From Ani-Gamers staff to guest contributors, each entry adds to a yearbook of fan experiences regarding one of the most important stories in animation. 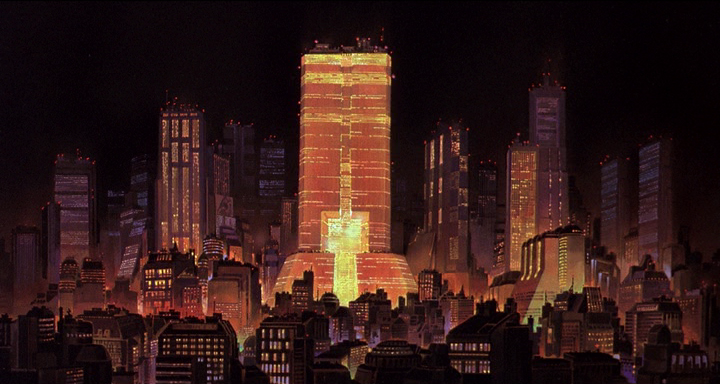 I think it’s the lights that do it for me.

In Akira, lights stretch out over vast highways and streets and illuminate the characters as they struggle for positions within the social order of things. As Kaneda and his gang race through the streets, the lights that initially served as starting positions eventually lead, through restaurants and shops, into the mayhem of a street riot as two groups scramble to be top dog. Streets offer themselves up as a spotlit stage upon which Tetsuo tries to measure up to his big brother and prove he’s a member of the gang too. The lights help change our perceptions of the characters by portraying the cast in a multitude of different manners.

Sometimes harshly and at other times plainly, the lights lend a type of background performance to the film that helps make the characters seem all the more desperate to know where they stand. While they think they’re sitting pretty, they do not realize there are forces at work that will destroy everything they consider reality — more so when we got into the medical wards of the military’s experiment in playing God. Soft and artificial, the lights make the place seem like a mortuary. Given how many people will lose their lives in the film, that’s not all that surprising. The lights paint the military in their vans and command posts with neon green glow as they look down on the world from a God’s-eye view — never having the intelligence or the soul to consider that, in their experiments, God might end up looking down on them. The lights are the guardians of Akira, and they mark the boundaries of the world in which it sits. Though not the only example, the lights are a perfect springboard to talk about the visual metaphors of Akira. 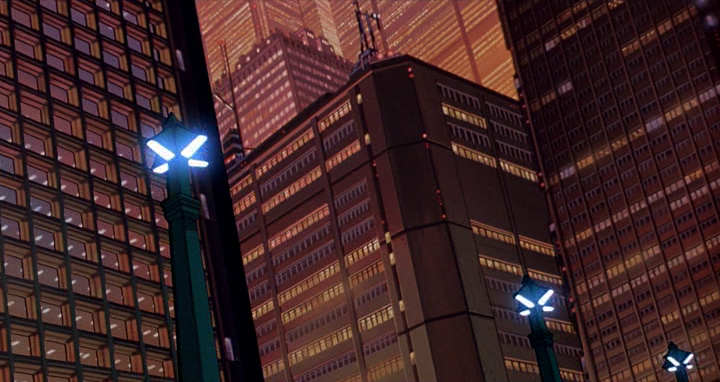 Akira's mind-boggling plot and concept is a fast-paced and erratic spectacle that eclipses the actual world in which it takes place. Neo-Tokyo is built on the ashes of the first city to bear the name — a striking metaphor with the atomic bombs dropped on Japan, its surrender, and the rise of the nation in the aftermath. Neo-Tokyo is a city with seemingly unending skyscrapers, sprawling underground complexes with multiple points of entry and exit, and a confident populace. But appearances are totally deceptive in this case. Built on the hubris of the previous cataclysm, the city is being managed, albeit covertly, by the same people who caused the first city’s destruction. Nobody has learned anything; they still think they can have it all and not pay a price. I’m not that much into religion or philosophy, but there's something karmic in the way the city is playing God again and how it is being torn apart from the inside even while everything appears normal on the surface. The young people who are increasingly cut off from the decision makers grow more and more enraged with each passing day. When they riot, it’s not “Why are they rioting?” but more a case of “Why did it take them so long?”

Katsuhiro Otomo grew up in the '70s during a cultural upheaval in Japan. Riots, protests, supposed coups, and socially maladjusted kids were all things he saw and experienced. In my opinion, Akira is Otomo voicing his opinion about how Japan learned nothing from those days and simply brushed bigger social problems under the carpet. Said problems include things that are relevant today: the presence of US forces on Japanese soil, the inequality of power between younger and older people, the problems of a rising nationalist side in Japanese society, and the feeling of helplessness that your life has been planned out for you and that nothing you can say or do will change that. If we accept these as facts, then the world of Akira is set in an alternate 1980s Japan (yes, I know it’s set in 2017), where Japan in the Second World War is the first incarnation of Tokyo, the atomic bomb is Akira himself, the rebuilding of the city is the economic prosperity that Japan had after the war, and Neo-Tokyo is Japan today. The people in the city who think they can play with fire, the ones who dodged a bullet the first time round, will think they’re safe. But it’s coming around again, and this time, as they sit there in their dimly lit rooms and stare at monitors or surveying reports, their Frankenstein is about to come looking for them. The world itself is about to put them in their place, and while they will perish, the innocent people in the city who were not told of the horrific secret of Neo-Tokyo will also have to pay a blood toll. 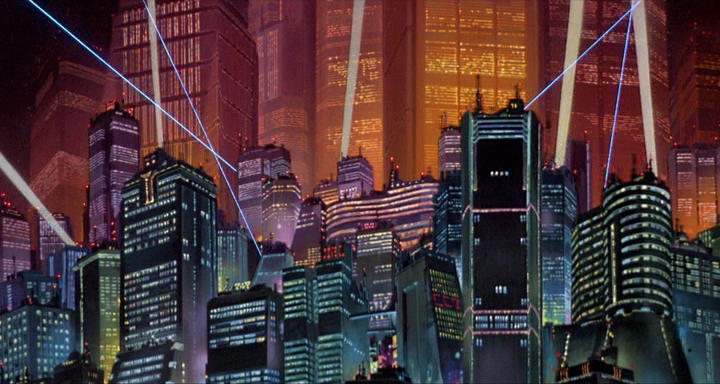 In the daytime, the light of the sun gives no warmth or comfort. This sun is indifferent to the city as it goes about its day. The people of Neo-Tokyo rush places they need to be without wanting to be there. The police districts are full of rowdy, angry punks who lash out at the people who can’t or won’t understand their needs. The crowds who throng the streets in protest clash with police officers who are doing their jobs without figuring out what their jobs are supposed to be. The tall buildings around them seem to signify that nothing they do or don’t do will have an empirical effect on proceedings. They are all rats in a maze that was constructed for them. They don’t know it exists and don't care if they are willing participants or not. Some think they are in power, while others think they can get power but do not realize that it’s fleeting at best, transitory, and uncontainable. If that isn’t a metaphor of the children, including Tetsuo, who were experimented upon and given God-like powers and how their captors will come to rue giving those powers to them, I don’t know what is. I also don't know of a better example of the feeling of blandness and meaningless modern society exudes in an era of always-on news with nothing important is reported, constant strife without resolution, and a feeling that someone other than you is living off your suffering.

The final part of what I consider to be a visual metaphor in the world of Akira is the final showdown between Kaneda and Tetsuo. An Olympic-sized stadium, built for sports, transforms into a gladiatorial arena — if not by action then by the harsh, almost physically oppresive light in which the combatants bathe. They are going to settle things once and for all. Although he does not want to, Kaneda has come to stop his friend. Tetsuo has come to prove he’s as strong as his mentor although he doesn’t know or doesn’t realize that doing so will kill him. When they finally fight, Kaneda is hopelessly outgunned (yes, even armed with a laser gun), and his ability to fight his way out diminishes (at best). Having been mistreated all his life, Tetsuo finally holds a better hand. Where most societies treat their young as the future, Tetsuo is treated like a resource here — something to be used, consumed, and discarded. All their lives, Tetsuo put Kaneda on a pedestal of respect that gave him power. Kaneda looked out for him, and Tetsuo looked up to him. In a sad turn of events, Kaneda must fight for the side of the people, including those who did this to Tetsuo, and stop his friend. The military already tried to kill Tetsuo and failed, because he won’t let them get close. But Kaneda can. When Tetsuo realises this, that is the final insult heaped upon himself and Kaneda. The society that spurred them, used them, abused them, and forgot their basic humanity now seeks to have them settle a score as to who gets to decide the fate of the world. 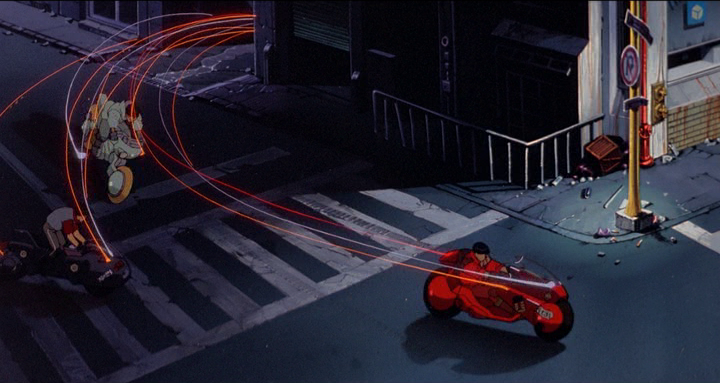 As to that final shot and final line, they can be interpreted in many ways. However, I’ll simply leave you with a story. It’s 1994. I’m thirteen, and my older brother and I are watching Akira for the first time. (We are not supposed to be down this late.) We sit there in the young hours of the morning and watch that final moment. I turn to my brother and say, “Wow. That was amazing.” He nods, grinning at sharing a secret with me that nobody else around us knew or cared for. Then we pack up to go to bed, and I turn to him as we go to sleep and say, “But what did that last line mean?” My brother told me what he thought it meant, and it seemed to me to be a good explanation at the time. I still believe it to be so to this very day. But I think that final line is a statement about us as a species and how we could find ourselves in this story if we’re not careful. Who we become after an event like that is the test of a creature as frail and fickle as our own.

Anyway, we pack up, and I stop at the landing window near the stairs. I look out onto the suburban street below and imagine those amazing bikes as they go speeding off into the night, leaving anger and proclamations of importance trailing in their wake. Nothing about this quaint street is anything like the streets of Neo-Tokyo. Except maybe in the lazily spreading, sickly orange illumination that stretches off into the night. Yeah, now I’m sure. It’s the lights that do it for me.