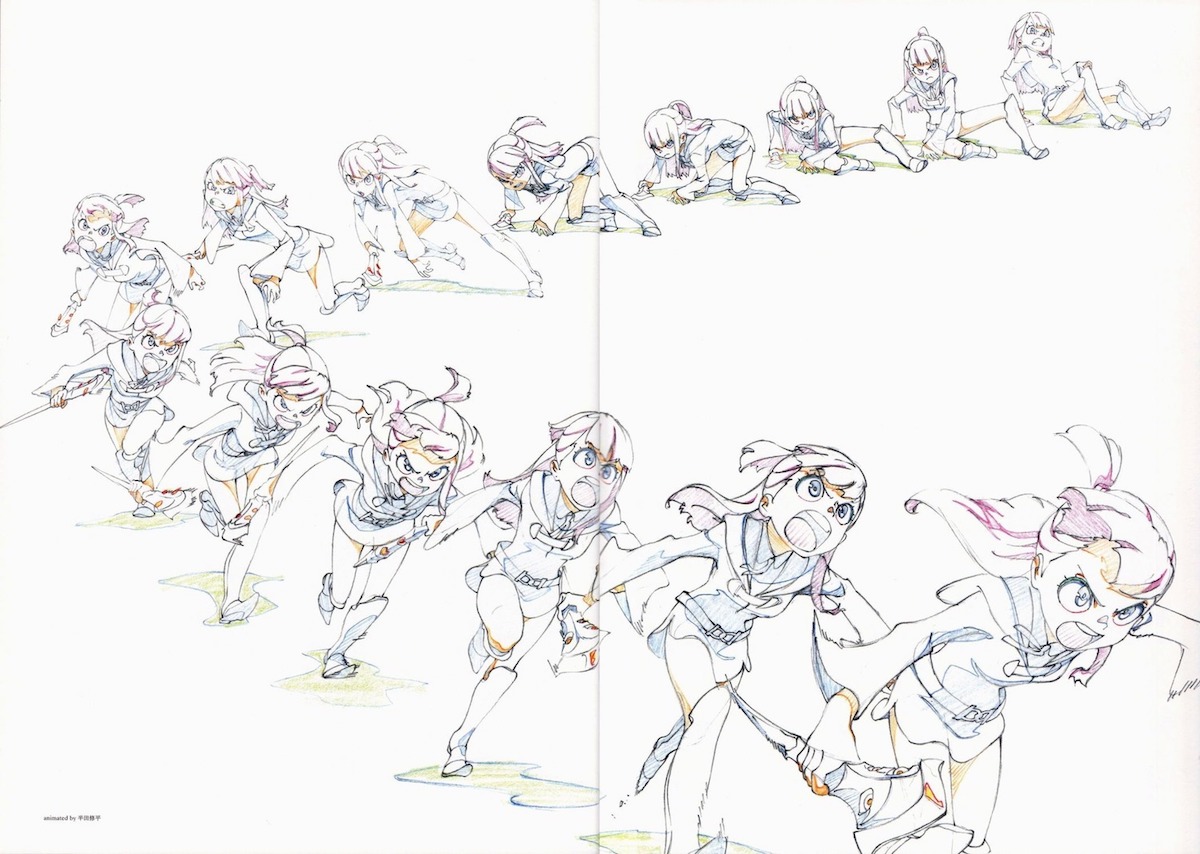 Years ago, few people outside of a small cabal of super-nerds wanted to talk about animation production in anime. Today you can find dozens of Twitter accounts dedicated to revealing production minutiae and even a few fairly popular blogs about it, like SakugaBlog and Wave Motion Cannon.

One thing that’s been frustrating for me, however, is the general lack of animation literacy among fans despite this proliferation of high-profile animation analysis. It’s easy to say, “I like how that scene looks,” but much harder to understand why you like it. “Good animation” is a fairly complex thing after all; dozens of minute creative choices about timing, shape, and color whiz by in mere seconds before the untrained eye has time to comprehend what exactly it just took in.

Thankfully, animators have tools for making these choices and analyzing the work of their peers. As animation enthusiasts, we can use these tools to deepen our understanding of the craft — learning to spot not just the trademark elements of famous animators or other obvious visual tricks but subtle things such as frame rates and deformations. And most importantly, armed with these tools, we can better understand how animators’ choices help drive anime storytelling. 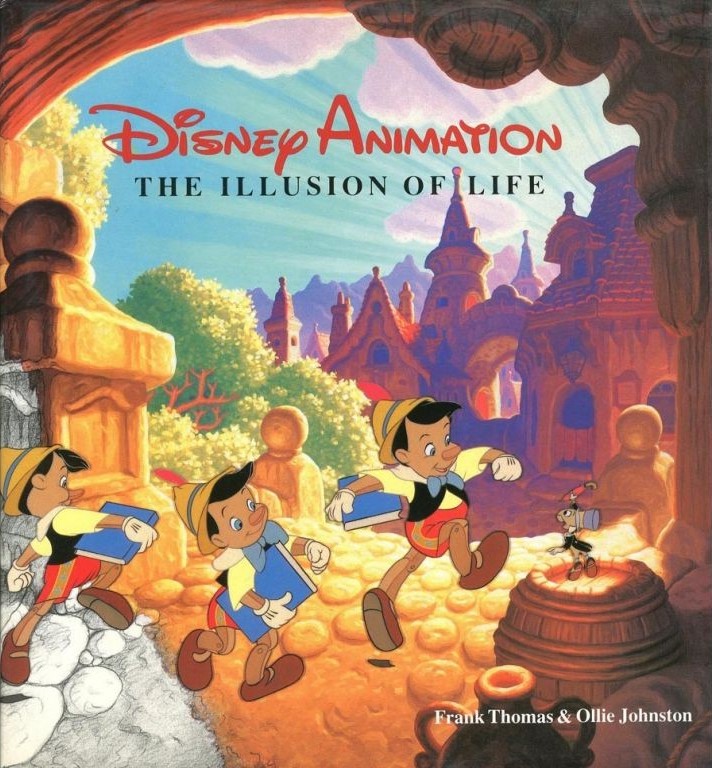 The most famous tool in an animator’s toolbox is a classic list of principles laid out by Frank Thomas and Ollie Johnston, members of the legendary group of Disney animators known as the Nine Old Men. In their book The Illusion of Life (1981), they describe the “12 Basic Principles of Animation” that Disney animators discovered early in their careers. They aren’t necessarily rules but fundamental ways in which animation tends to operate. As such, they show up in many different cultures and animation traditions, even in works produced by animators with no exposure to the book. In fact, most young Japanese animators don’t learn the 12 Principles, but we can still find lots of examples of them in anime. Let's take a look!

Other than rigid bodies like wood or metal, most objects in the real world tend to deform a little bit when something exerts a force on them (depending on the makeup of the object and the strength of the force). With this in mind, flattening out an object in one direction or another can show the audience its weight as well as the force being exerted on it. In addition to that purely physical point, “squashing” or “stretching” a character can accentuate aspects of their personality, especially when various squashes or stretches in different parts of their bodies are combined. Anime doesn’t often deform characters quite as often or as obviously as Western animation, but if you’re paying attention you can spot it.

Actions can pass by quickly on screen, so in order for audiences to “read” them, animators must do a little bit of telegraphing the action to set expectations for the audience. This “anticipation” often takes the form of a preparatory action in the opposite direction of the main one, such as a pitcher winding up before throwing a baseball. These anticipations not only ensure that motions are readable, but also accentuate them by creating a larger contrast between the start and end position.

Staging is a much more general principle and one that applies just as much if not more to directors and storyboard artists as it does to animators. Essentially, the main action of the scene should be placed on screen in such a way that the audience knows exactly what they're supposed to be looking at. The most important concept in staging is that of the silhouette. Especially in the age of black and white film, a character might have a black arm and a black torso, meaning that when the arm passes over the torso the audience loses track of it. Turning the character to show a clearer silhouette prevents this problem and also makes the character stick out more against the background, which is why it's still in use today. Storyboard artists especially pay close attention to this, and try to place the “camera” in such a way that both characters’ poses and the backgrounds will form striking silhouettes.

4. Straight Ahead and Pose to Pose

Broadly speaking, there are two ways to animate a scene: draw each frame one by one from start to finish, or segment the scene into poses and then fill in the gaps between them. The former is spontaneous and natural but runs the risk of mis-timing important poses or losing track of the volume of the character. The latter is careful and clear but can sometimes feel rigid. Straight ahead is the most basic form of animation, but most industrial animation production uses pose-to-pose, with “key animators” drawing key frames and “in-betweeners” filling in the gaps. Some Japanese animators, however, use straight ahead. The most famous one is Mitsuo Iso, who calls his spin on the technique “full limited” animation. Junpei Tatenaka, the main animator for the skating scenes in Yuri!!! on Ice, also animates mostly straight ahead, though he sometimes makes rough pose sketches first.

Note that this has nothing to do with “frame rate,” which is the number of new drawings per second. It's a process choice the animator makes that isn't necessarily reflected in the finished product. As a result, it can be hard to see when watching animation. The easiest way to pick it out, however, is to look for objects that repeatedly settle into clear poses (pose-to-pose) or ones that never seem to settle at all (straight ahead).

Follow through is the close cousin to anticipation. Where the latter sets up the action, the former sells it once the action's already completed. Breaking this down: when the main action ends, some parts of the object will keep moving and eventually come to a stop but potentially at different times. This is not only physically realistic, but it also adds depth to the motion and makes it more readable when moving quickly … just like anticipation. When you combine the follow-through in many different parts of the motion, it creates what's called “overlapping action,” in which the object is in near-constant motion — each action ending as another one is beginning.

Especially in pose-to-pose animation, animators want their poses to stick out since they're the most interesting parts of the motion. On top of that, they want motions that feel organic rather than rigid and uniform. As a result, animators will often bunch up the frames at one end or another so that actions start and end slow but are fast in the middle. When done well, this produces a sort of "snappy" effect with a lot of energy to it, since it recreates the physical phenomenon of a force overcoming or being stopped by friction.

Everything but the most rigid bodies moves in arcs. This applies especially to living creatures. Consider, for instance, how a human arm is anchored at a single point on the body and thus must follow a curved path. A character moving in a straight line from point A to point B would seem fairly unnatural, so animators will often move them in arcs. These can apply to any object in the scene, and complex motions are very often composed of a series of large and small arcs.

As seen with follow through, multiple parts will usually be moving simultaneously on a character. Usually there is a primary action that drives the scene, but to make the scene even richer, animators will add secondary actions that accentuate its effect. For example, if a character's primary action is running, the legs and arms will carry most of the scene, but additional head movement or facial animation can tell you more about whether it's a happy run or an angry run. It's important, however, to ensure secondary actions don’t overshadow the primary action and thereby make the scene feel too busy and hard to follow.

Animator Grim Natwick (Betty Boop, Snow White), as quoted in Richard Williams’s seminal Animator’s Survival Kit, famously said that animation is “all in the timing and in the spacing.” The two are closely related since the animator can decide both based on how many drawings to make for a scene and how close to place the objects in each one. The general principle of timing is that more drawings within the same span of time will make a motion feel smoother and slower, while fewer drawings will make it feel choppier and faster.

Film usually runs at 24 frames per second, but animators rarely make new drawings for every frame. Disney productions would often animate “on twos,” meaning a rate of 12 drawings per second, and only move up to “ones” (24 drawings per second) for fast motions, where the lower frame rate couldn't adequately capture what was happening. If they let the rate get too low they would run the risk of undesirable aliasing effects.

But Japanese animators have come up with ways of using different frame rates to create timing effects. The technique, popularized by Toei/Ghibli animator Yasuo Otsuka, is called “framerate modulation” and probably deserves an article of its own. But suffice it to say that anime often moves between 6, 8, 12, and (rarely) 24 drawings per second depending on whether the scene warrants a smooth, organic movement or a more abrupt, intense one.

Animation has a nearly limitless potential for expression, from everyday life to science fiction worlds to surrealist glimpses into the human mind. With all that potential available to animators, it’s a waste to simply recreate real life exactly. Animators need to select parts of reality to exaggerate, much like a caricature artist analyzing the face of their subject. If selected well, exaggeration can be more true than reality, accentuating the most important things about a scene or character.

Whether it's hand-drawn or computer-generated, animation generally requires an artist to generate frames “from scratch,” as opposed to film, where the cinematographer captures a glimpse of reality. As such, the integrity of each frame is incredibly important to the finished product. In traditional animation that means a focus on strong drawing skills. (Many animators study life drawing and hone their realistic drawing skills before taking a crack at cartoons.) And we can extrapolate this principle to apply to creating sound and well-proportioned 3-D models. If the artists cannot create characters who are “solid,” whose weight and proportions are plausible to the audience, the rest of the animation will have trouble compensating.

All of the previous 11 principles lead to “appeal” — the quality that allows audiences to connect with a character. Appeal isn't just about being cute or likable. It’s the magnetism that makes characters feel alive, that grants them personalities that evoke emotions or love, hate, or fear from the audience. When everything lines up right, from a well-drawn character to a particularly expressive motion to a clearly staged scene, you get appeal.

While many animators have been great at evoking appeal — obviously Disney and his team were particularly talented — this is one area where anime has done very well. Even when working with lower budgets and frame rates, or when targeting adult audiences, Japanese animators have created a multigenerational canon of beloved characters from Astro Boy to Golgo 13 to Sailor Moon.

And that’s all 12 of them! There’s a lot more to talk about in the world of animation, and a lot more detail I could go into for each principle. Thankfully my buddy ibcf has already started down that road on Wave Motion Cannon with an ongoing series focusing on each principle, so if you'd like to learn more I highly recommend you check out his work. And if you have any questions or anything in this post was unclear, leave a comment and I'll be happy to clarify!

Note: All video clips in this article are courtesy of SakugaBooru.