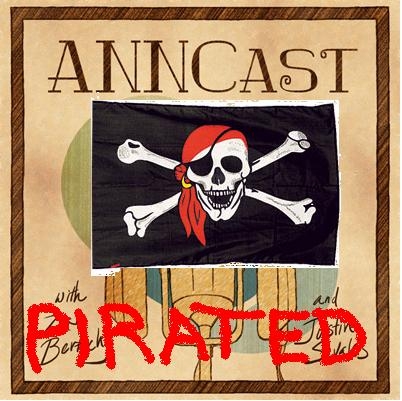 For years we have languished under the oppression of our ANNCast overlords, who refuse to even record a podcast at the East Coast's largest anime convention, Otakon. So, with the help of our fearless captain Ed Sizemore, an intrepid team of Otakon pirate podcasters — including yours truly — have hijacked the Anime News Network's popular podcast to talk about Otakon 2012.

Unfortunately the audio recording is one iteration away from Alvin Lucier's "I am sitting in a room," but I guess it's in keeping with the pirate theme.

[0:00:16] Everybody introduces themselves. First off is Justin Sevakis (@worldofcrap), our captive ANNCast host and the founder of Anime News Network. Then there's Michael Camacho (@GNitro) and Scott Spaziani (@ScottSpaziani) from Otaku in Review, The Big N (@TheBigN) from Drastic My Anime Blog, Alain Mendez (@hisuiRT) from the Reverse Thieves, Ani-Gamers' own Evan Minto (@VamptVo), and Daniel Briscoe (@DanielBriscoe) from Eastern Image. Ed Sizemore (@edsizemore) from the Manga Out Loud podcast forgot to introduce himself, but he's hosting.

[0:30:32] How safe is Baltimore? It has a reputation as a pretty dangerous city.

[0:34:44] We talk about nearby restaurants, the huge number of attendees at Otakon, and their effect on the Baltimore economy.

[0:41:05] Justin drops some final comments about the con before we close out the show.