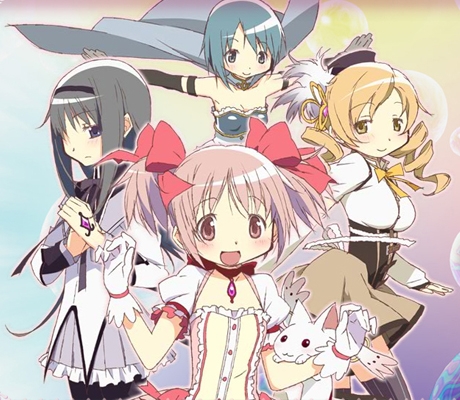 What? Huh? What's a podcast? I'm not even sure anymore. But luckily David Estrella is here to help re-discover the true meaning of podcasting in the latest episode of the Ani-Gamers Podcast. Unfortunately, he doesn't help me remember to introduce myself. Whoops!

In this episode, we talk about crying anime girls, genre deconstructions, and spurious voice acting performances as we tackle the hugely popular magical girl anime Puella Magi Madoka Magica. Don't worry if you haven't seen the show — we've separated our spoiler talk into a separate section of the podcast after the outro song. Everything in the main section is free of Madoka spoilers (though we might slip in some spoilers for older series on occasion).

[0:00:17] Podcast-related news and introductions! (Host Evan Minto forgot to introduce himself, like an idiot.) We also talk about iDOLM@STER for a bit since David reviewed it on the site.

[0:05:14] Madoka review starts. We decide on not spoiling the series until the end of the show (separated into a post-outro section).

[0:09:58] The fan culture around Madoka is incredibly important to an understanding of the show, so we take a good look at the zeitgeist.

[0:19:52] There's a lot of suffering and sadness in Madoka. Which parts worked, and which ones didn't?

[0:23:53] The English dub has some spectacular hits and embarrassing misses. We also describe the fictional life story of Christina Vee.

[0:32:35] Madoka is undoubtedly a deconstruction of the magical girl genre, but what does that mean? Does it help or hurt the show? Evan says the word "deconstruction" over and over without really explaining what he's talking about, so, uh... sorry about that. In this case he's basically talking about examining and taking apart a genre by looking at the consequences of the fantasies inherent therein.

[0:43:04] Shaft and Akiyuki Shinbo are known for their quirky art style. Is it appropriate for Madoka's ambitious narrative?

[1:02:44] We lay down some final thoughts on Puella Magi Madoka Magica.

[1:09:59] David and Evan spoil the heck out of Madoka Magica as they continue their discussion of the series. Don't listen past the end of the outro song unless you've already seen Madoka or are OK with having major plot twists spoiled. Also, uh, we kinda spoil some stuff from Gurren Lagann and Serial Experiments Lain. Sorry!