Never mind the ides of March, the end of March is going to be Brutus brutal(ly awesome). Although I accidentally ended up attending Animania! earlier this month, Zenkaikon and Castle Point Anime Convention (CPAC) mark my first official con destinations of 2015. They're taking place on the same weekend, and I'll be presenting at both! After the break, check out what I'll be presenting, with whom, and what panels I'm aiming to attend. Otherwise, I hope to see some of you Ani-Gamers reader [sic] around the con(s) and hope you check out both con reports! 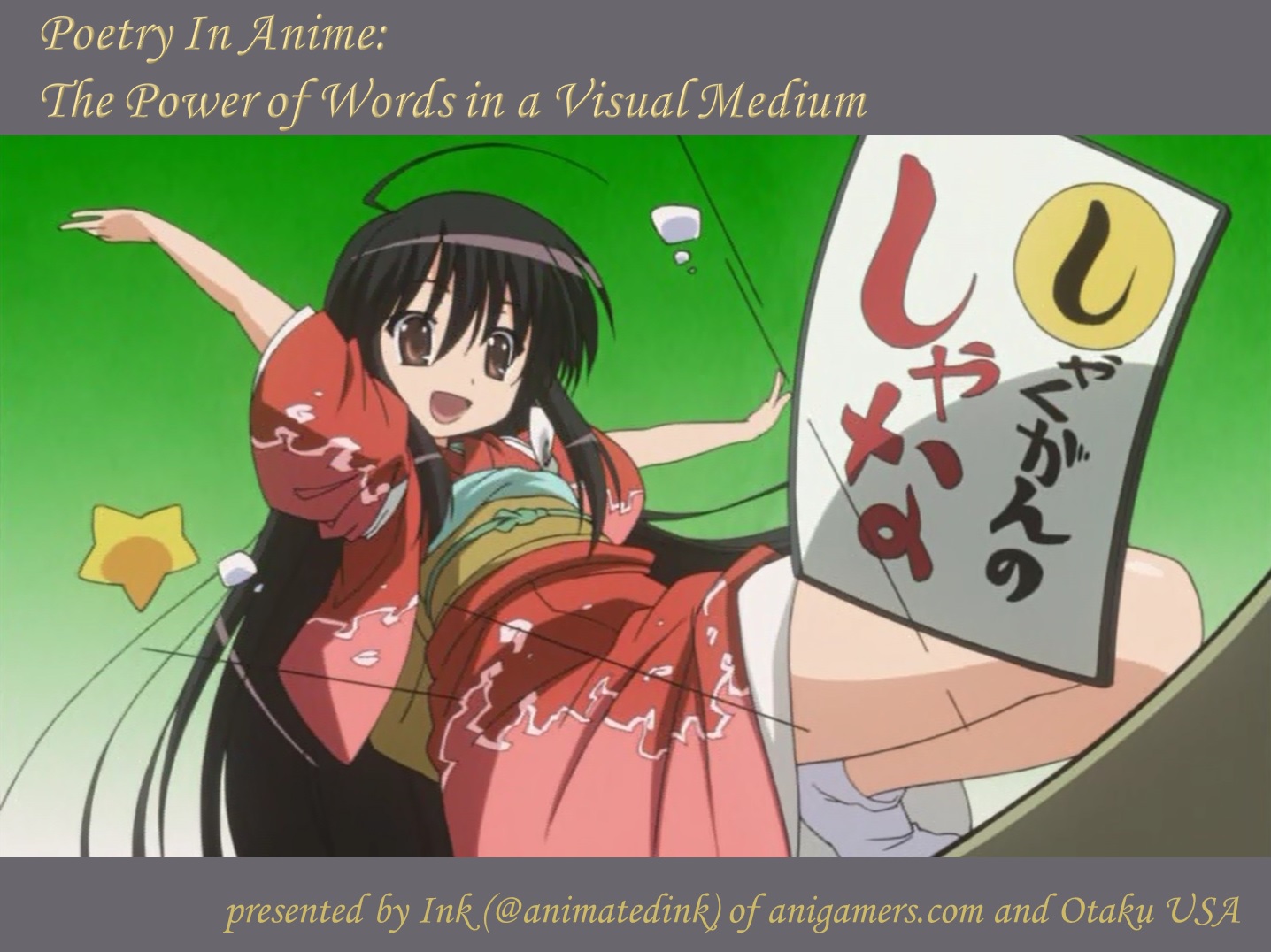 Like its subject, my panel needs a little room to breathe. I've only presented condensed versions of it until now, which is why I'm excited to say that both cons are giving "Poetry in Anime: the Power of Words in a Visual Medium" a 90-minute time slot (with ample empty-room time afterwards for questions, comments, and shenanigans). There's been a lot of tightening and additions since this panel's AnimeNEXT debut, so come on by and take in the director's cut!

Also at CPAC, I'll be joining Vincenzo Averello of All Geeks Considered for "The Con is Alive with the Sound of Anime!" from 12:30–1:30 pm in Panels 2. This panel was born of passion for diverse anime titles focused on music or which use music as a core device. Between Vincenzo's tastes and my own, we've got a lot of surprises in store and a ton of recommendations to give.

Speaking of recommendations, here's what I'm looking forward to (for one reason or another) panel-wise:

Saturday
Hidden Gems of Manga
Shinto Elements in the Films of Hayao Miyazaki
Convention and Cosplay Etiquette: Uncensored Edition
Historical and Legendary Heroes of Japan – or who is Minamoto no Yorimitsu anyway?
Magical Girl Bootcamp
The Politics of Bravely Default
Back in My Day: Conventions and Cosplay Then and Now
Poetry in Anime: the Power of Words in a Visual Medium
Even more Awesome Animation Not from Japan
Strong Female Characters in Fiction
Anime Openings Through the Decades
Super Awesome Happy Fun AMV Time!
Violent Japanimations From Japan: The Best Hyperviolent OVAs That You Should Be Watching

Sunday
Good Morning Castle Point
The Importance of Representation in Media
70s Anime Funtime
The Con is Alive with the Sound of Anime!
Poetry in Anime: the Power of Words in a Visual Medium
Psychology of Anime
The Great Debates

Panels I won't be able to attend but HIGHLY recommend checking out:
Insight Into the Manga Industry With Yen Press Editor (presented by Justin Stroman)
The Play's the Thing: Shakespeare in Anime and Manga (presented by Robert J Gannon)