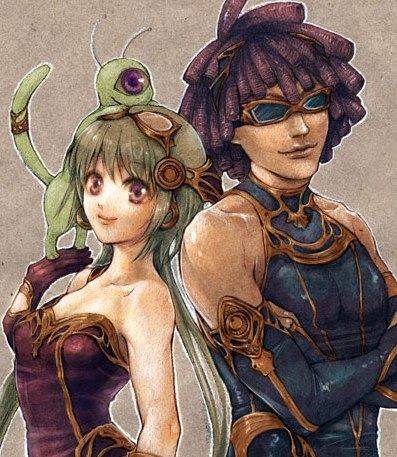 Wow, is it already that time of year again? AnimeNEXT, my "hometown con," is right around the corner, and Ink and I will be down in Somerset, NJ once again to cover the con and run some panels. But it's not just us — a bunch of other cool Internet folks will be in town, including the Anime News Network's Mike Toole, All Geeks Considered's Vinnie Averello (who's in charge of panels for the con), the Reverse Thieves's Alain Mendez, the indomitable Charles Dunbar [EDIT: Sadly, Charles will NOT be at AnimeNEXT. For some reason I assumed he would be], stand-up comedian and ex-Ani-Gamer Uncle Yo, manga podcaster Xan Spiraken, and many, many more!

There are lots of great panels at AnimeNEXT this year (and some that look to be pretty lame, but don't tell Vinnie I said that), and mixed in are two of my own. First is "The Beautiful Backgrounds of Anime," at 5:00 PM on Friday in Panel 4. If you liked my panel "The Changing Faces of Anime" about character designs, you'll probably like this one as well, as it's about the overlooked art of anime backgrounds. Then on Saturday at 9:30 PM in Panel 2, I'm hosting "Panel Lightning Round," in which five panelists that I've selected get up for ten minutes each to talk about a subject of their choosing. It's a little experimental, but it should be a lot of fun. Want more info on what Ink and I will be doing at the con? Check out our detailed schedules after the break. Schedule conflicts will be resolved on the fly during the con. If you do manage to catch us around the con, don't be afraid to say hi!