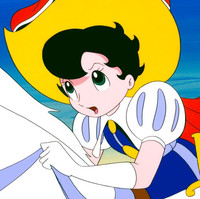 If Vertical Inc's release of Osamu Tezuka's Princess Knight manga wasn't enough for you, Right Stuf, Inc. just announced the acquisition of the 52-episode TV anime series, with plans to release it in limited edition DVD sets next year.

Princess Knight, AKA Choppy and the Princess, will include the original English language dub, as well as a Spanish language option. As a result of material availability, the DVDs will feature the edited and cut broadcast footage from Princess Knight's TV syndication. It will not have the Japanese audio due to sync issues.

Princess Knight follows the heroic adventures of Sapphire, a young princess born with the hearts of both a boy and a girl and who is also being secretly raised as a prince so she can eventually succeed her father as king.

Produced by Tezuka's Mushi Productions, Princess Knight ran on Japanese television from 1967-1968. Tezuka's original manga was serialized in Kodansha's Shoujo Club magazine from 1953-1956, and is available in deluxe collections from Vertical Inc. Vertical will also be releasing the sequel, Twin Knight, in 2013.

Joseph Luster is the Games and Web editor at Otaku USA Magazine. His blog can be found at subhumanzoids. Follow him on Twitter at @Moldilox.