They're the Part 2 of 3 you receive when both bookends are out of print. They’re the discs marked down to $1 during clearance and holiday sales. They're fodder for Ani-Gamers’ Mystery Box of Misery column, which appears monthly with three short, context-free reviews of as many blind-box items. Ani-Gamers Patreon supporters voted via poll to determine who reviewed which title.

This will be the final entry in this column! Thanks for reading everybody! 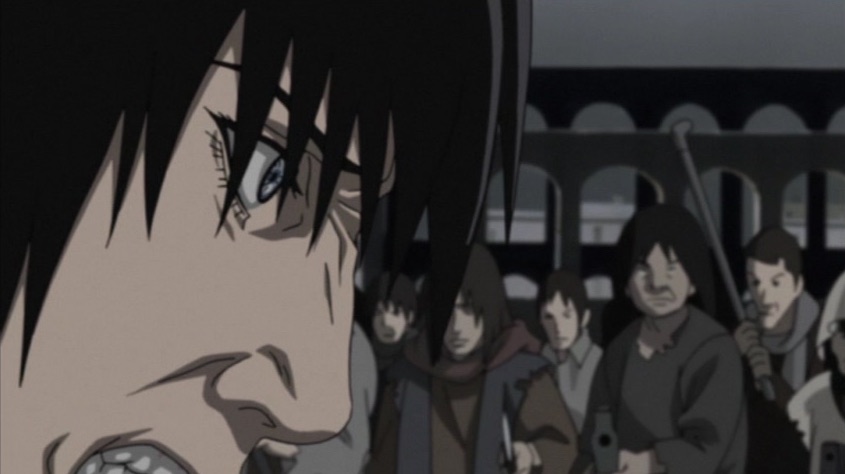 Now this right here is the true spirit of the Mystery Box. Our lovely patrons, who I am very fond of and not even a little bit mad at, voted to make me watch the last disc from the cyberpunk turd that is Texhnolyze. I watched and reviewed this series about a decade ago, and that review reminds me that I actually liked some aspects of this show. I forgot all about that positive stuff because the memory that stuck out in my head was how utterly dull it is.

Despite having seen Texhnolyze already, I still don’t fully understand what’s going on, but I’ll try. Our hero Ichise has made it to the surface of his gray, post-apocalyptic world, expecting paradise but finding instead a population simply waiting around to die. So he heads back down to the underground city of Lukuss. It’s these last two episodes where things get especially hazy. According to the dialogue and persistent voiceovers from multiple characters I couldn't identify, the city has “gone insane.” Pretty much the entire principal cast dies in the violence, with Ichise left to process his grief and presumably wait for his own death as the credits roll.

That credit sequence is one of the few scenes I genuinely like on this disc, because its simplicity and strong song choice at least do a good job conveying the vibes that the show’s ending is going for. Texhnolyze is confusing enough with the context of the rest of the series, but without it the last few episodes are nonsense. We see almost no direct character interactions, with most of the ideas expressed via cryptic inner monologues or hallucinations. I’d be hard-pressed to tell you what any of these characters want.

As with the rest of the series, it’s also really rough to look at. There are a few action scenes, but they’re usually nothing more than pans over still shots. Even the ones with actual animation are sludgy, boring affairs. Some shots are overlaid with an ugly green film grain filter, for seemingly no reason. And as many others have pointed out, this show has some of the muddiest, least appealing colors I’ve seen in any anime production.

One last note: When I skimmed back through these episodes before writing this review, I played them back at 1.25x speed. It was like watching an anime at regular speed. I hope I never have to inflict this show on myself again. 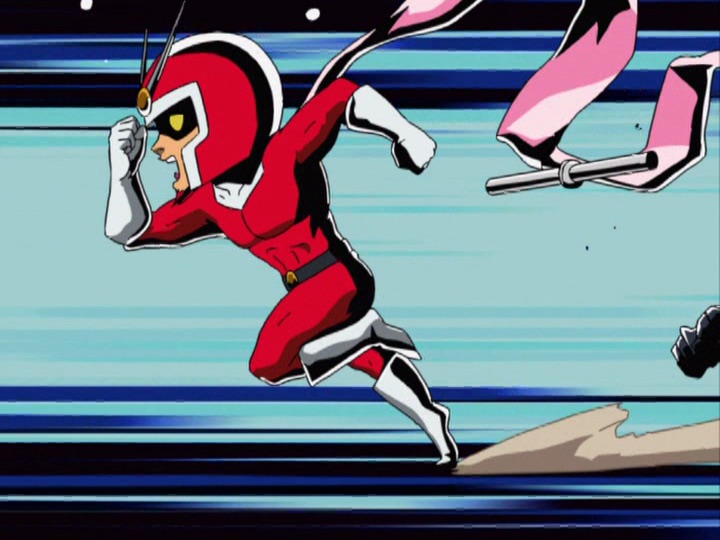 If there’s one thing I love more than shoddy video game tie-in anime series, it’s when those anime series are released on shoddy dub-only DVDs! David already covered the basics of Viewtiful Joe in his review of the first disc for this column, so I won’t rehash all that.

Personally, I have zero prior relationship with the Viewtiful Joe franchise; I didn't play the games and certainly never came in contact with this anime version. The games were lauded for their striking anime-inspired visual style, but that kind of thing is only cool when the media isn’t already an anime. Applying the inspiration back onto the original medium nullifies all the novelty. Just look at the live-action Cowboy Bebop series: a live-action series inspired by an anime inspired by live-action films.

To make matters worse, the production on this thing is as dull as you can get: minimally animated action scenes, way too many tracking shots, flat digipaint art — all the hallmarks of a phoned-in media mix anime for the kids market. At least the character designs look decently close to their game counterparts, though I find the vaguely super-deformed proportions in the original (and by extension this anime) extremely off-putting.

The three episodes on the disc are dreadfully tedious excuses for monster-of-the-week fights, which would be fine if the fights were at all worth watching. Being forced to watch them all via an English dub that relies on gimmick accents for half the cast made this an excruciating experience.

Nevertheless, the first episode features an entire subplot revolving around hamburgers, which means this is the best anime I’ve watched for this entire column. All is forgiven. 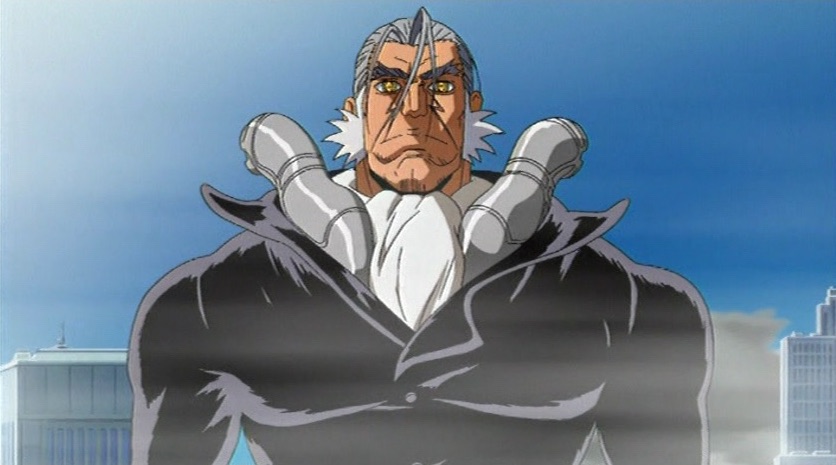 Our patrons clearly had it out for me with these three. Heat Guy J, like Texhnolyze, has a pretty bad reputation. In this case, though, I was pleasantly surprised.

A Satelight show clearly aping the sci-fi shows that hit it big in the West — Cowboy Bebop, Trigun, Ghost in the Shell — Heat Guy J is about pretty-boy investigator Daisuke and his partner, the titular “Heat Guy.” Yes, characters say the phrase “Heat Guy” in very serious tones and nobody (but me) bursts out laughing. (He got the name because he’s a robot who gets extremely hot and has to vent that heat via steam.) The first few episodes feature a few decently entertaining cyberpunk detective stories with some fun action scenes.

The thing is, the staff on this show is pretty good! There’s the aforementioned Satelight, but also director Kazuki Akane and character designer Nobuteru Yuki (both veterans of Escaflowne). There are some neat set pieces, including an open-air market chase a la Ghost in the Shell, and one or two standout pieces of action animation.

Plus there are quite a few neat little world-building touches in this first disc. Daisuke, for instance, spends most of the episodes talking to informants and digging up clues like a film-noir sleuth, but when it comes time to fight he has to fill out paperwork to take out a gun and a limited ration of bullets. The city he patrols is a curious amalgamation of American cities, featuring both San Francisco-style cable cars and reproductions of New York City buildings like the Flatiron. And more than anything else, I just like watching this kind of show again. A series with adult characters who all have a certain poise and confidence. Sometimes you just want a cartoon about cool people doing cool things.

Where I can see the cracks starting to form is when Heat Guy J tries to build up its central dramatic narrative. The antagonist comes off like a one-note “he’s craaaazy” villain. Daisuke reveals in a clumsy bit of exposition that a rogue robot killed his parents so one day he might have to kill J. Maybe if I kept watching, this stuff would become a bigger problem, but for just a four-episode teaser, this was surprisingly watchable.