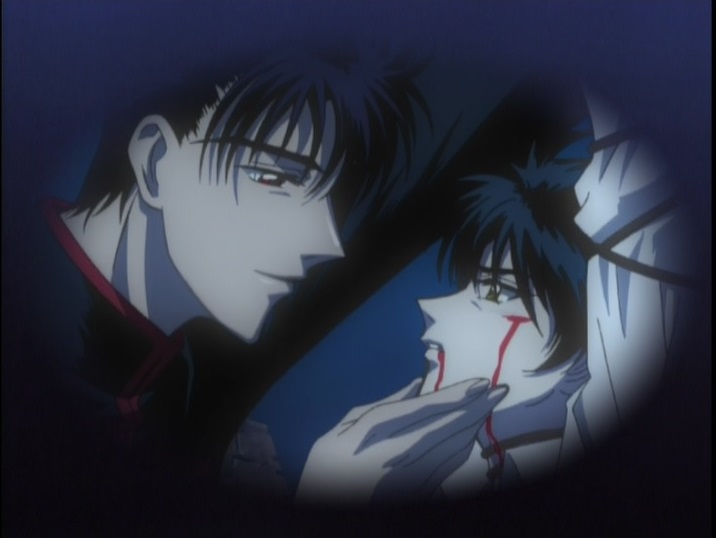 First in the pile of pristine, shrink-wrapped DVDs is X Volume 5. Originally a manga by Clamp, this series was adapted by Madhouse in a time when that might have meant something to people. It was published by Pioneer Entertainment here in the US, just before rebranding to Geneon, a name that is probably quite familiar to previous victims of the Mystery Box of Misery. It’s a name we will be coming back to every time I break open the seals on anime discs that I’m all but certain should have remained sealed.

Jumping in at Episode 13, X is an impenetrable mess about noodle people bickering over something or someone called “kamui” while invading each other’s personal space. Characters confidently dive into abstract dreamscapes created by bedridden and delicate anime boys as if this were a regular occurrence. When basic symbolism is employed, X goes one step further to explain to the audience why the campus is in the shape of a pentagram. The moment I think I start to get my bearings, the scene will cut away to characters I’ve never seen before reacting to a far-off event they perceive with mystical powers. I feel like the guy in the anime club that loudly exclaims “what?” at the screen every few minutes.

I fully expected everything that happens in X to mean nothing to me and in that regard, my expectations were fulfilled and more. Most of the runtime on this DVD is dedicated to the cast standing around and talking about events that happened in past episodes, while the camera can only pan across the scene given how little there is to animate. The most fun I had with this is picking out all the voices that would go on to feature in Type-Moon stuff within a short amount of years, most notably Suwabe Junichi, who has been doing Archer for about 15 years now. As hard to believe as it might be that he wasn’t born sounding like Kyon, Tomokazu Sugita also shows up in a very early career role but without any of the main character verve in his voice.

Voice actors aside, a fair amount of names attached to this thing on the production side have gone on to do other, more enduring works. While X might be buried and forgotten, it is as unremarkably solid a production as one might expect from a crew comprised of established pros and fresh-faced newbies that still have their better years ahead of them.

Extra stuff: A reversible cover, a gallery of stills in DVD resolution, and 15 minutes of previews. 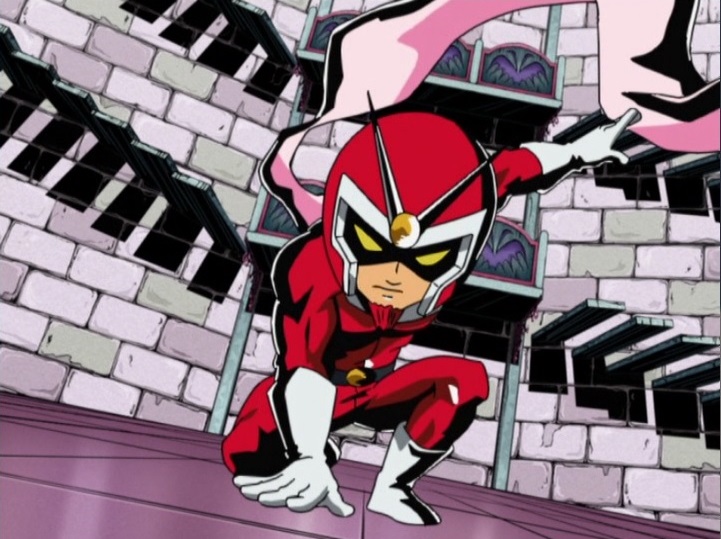 Oh boy. You know, I used to be a really big Capcom pervert back in the 2000s. I was obsessed with the PlayStation-era Megaman games to the point where I was drawing Megaman comics in class on the back of my Biology homework. When Viewtiful Joe came out on Nintendo Gamecube, it was lauded as a return to the roots of the old school while also innovating on a new breed of action-platformer. I ate up all the previews in the magazines, I bought a copy when it came out, I got my ass kicked from start to finish, and that was the last I ever thought about Joe.

Although I am already familiar with the game , the A-G base was kind enough to start me on Vol. 1. VJ begins with dorky manchild Joe on a date with his girlfriend, Silvia, a woman who is way out of Joe’s league and exceedingly tolerant of his superhero fixation. While Silvia hopes to capitalize on some private time with Joe in an empty movie theater, Joe is bewildered by the defeat of his idol, Captain Blue. To make things worse, Silvia is dragged into the film by the villain, and Joe is nearly flattened by Captain Blue’s mecha tumbling out of the screen. In order to save his girlfriend, Joe must take Captain Blue’s place and become the new hero of Movieland.

The premise doesn’t need a lot of explaining, but if you ever wanted to get some more backstory for a series that was retired by Capcom more than 15 years ago, well, here you go. There’s a lot more talking and a lot less action than I remember, but I guess that’s how it goes with shows made for kids on a budget. The game was originally praised for its unique cel-shaded graphics and (at the time) stylish bullet-time effects, but aside from the look, very little of the game’s spirit survived the adaptation process. Lots of corners get cut, and animation gets recycled to prolong floaty-looking fights that lack any impact. The script and dubbing is a relentless stream of early aughts slacker talk that hasn’t aged any better than Joe’s backwards-hat, nu-metal aesthetic. Frustratingly, the Japanese audio track is absent – likely since it wouldn’t sync up properly with the edited American broadcast cut. That’s a shame since now I’ll never hear Gilgamesh’s voice actor put on his best Fred Durst impression.

Apparently, they made 51 episodes of this thing but only half of it made it here on TV after the Kids WB programming block was folded into The CW. Not a huge loss honestly. Geneon dragged this one out across 8 DVD releases a year after the last Viewtiful Joe game Capcom ever published was launched on Nintendo DS in 2005. While the games were fine as far as I remember, it sure left a wake of defunct names and businesses during its brief period of relevancy. In retrospect, it’s depressing seeing how badly Capcom screwed up by trying to launch another franchise from a small passion project, but I’m sure Kamiya Hideki is not doing too bad these days ever since founding PlatinumGames.

Extra stuff: A $10 coupon for Kids Foot Locker that expired 15 years ago, a fold out poster, some character bios, trailer reel. 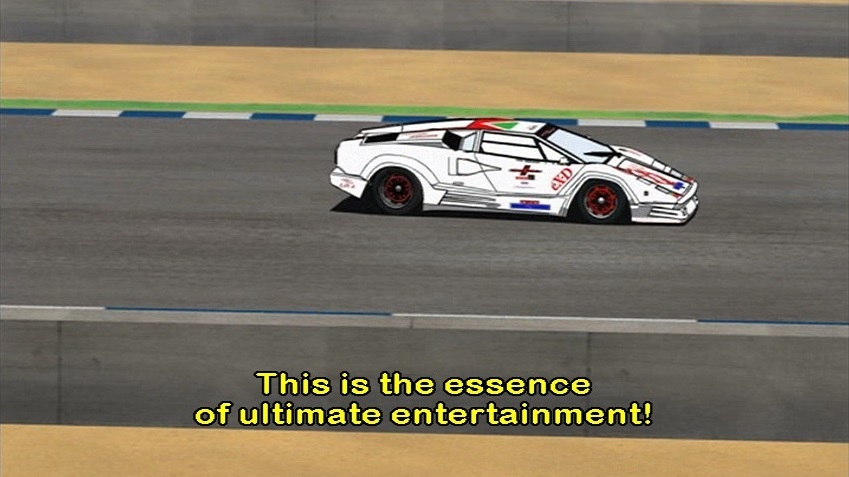 Saved the best for last, am I right?

éX-Driver The Movie is a weird thing. It’s a hybrid 2D/3D anime from Actas and the Ah! My Goddess guy, ten years before the studio stumbled head-first into the beguilingly good Girls Und Panzer. Like GuP, it posits the idea that audiences are interested in cute girls riding around in specialized machinery. In this case, it’s race cars. It’s unfortunate that the main character is a 12 year old boy, but it’s understandable since “harem anime” was the default template at the time.

In the future, cars are controlled by AI, and since this is immediately a terrible idea, éX-Drivers are required to patrol the streets in manually-driven cars and hunt down rogue vehicles. Being that this is a “The Movie” type of deal, the Japanese éX-Driver team is sent to America to compete in a race that gathers the top racers from across the globe.  The movie opens with a decent chase scene that establishes all the setting stuff with offhand remarks from characters shouting at each other while tailing behind a speeding car gone haywire. They find a girl in the car named Angela, who is voiced by Sawashiro Miyuki a few years before she was getting big roles. The international race competition falls to the wayside as the focus ends up on Angela and her relationship with her ex-mob boss father, who seems to be involved in a scheme with the owners of the other race teams.

Things develop from there and I guess one of the few “joys” of getting a standalone release in the Misery box means I can watch something with a coherent beginning, middle, and end. To my relief, éX-driver The Movie is a competent work that’s only an hour long. It’s not overly ambitious, it doesn’t commit any terrible crimes in the writing, and the climax featuring a runaway truck barreling towards a ravine works reasonably well. I was put off by the appearance of the 3D cars on the packaging, but the truth is that it doesn’t look any worse than what you might see in anime right now. And in some cases, éx-Driver is better animated than some choppy Polygon Pictures fodder sitting in your Netflix queue.

The movie is presented in widescreen with 5.1 audio in English and Japanese on a dual-layer DVD. Geneon put a decent amount of effort here unlike the hack job they put in authoring the Viewtiful Joe disc. éX-Driver The Movie didn’t set my world on fire or anything like that, but I can’t be too upset at an hour-long anime that’s mildly amusing at best and somewhat boring at worst.

Extra stuff: “Illustration Theater”, which is a collection of shorts made from rough stills that feature the characters doing exciting things like hot spring visits and going through airport security. Better yet, there’s also a whole OVA episode, titled Nina & Rei Danger Zone. Nina and Rei, who do not appear in the movie, chase after a creepy stalker who is terrorizing the streets with RC cars. It’s alright but not as polished as the movie.

WHAT DID WE LEARN:

Geneon put a lot of crap people didn’t want on DVDs, and some of it isn’t the worst. And big names are occasionally attached to weird projects you’ve never heard of and would never have watched if it was’t for the Mystery Box of Misery.