Fun fact, it was my idea to call this column “misery box.” Unfortunately I had a ball watching all three shows! 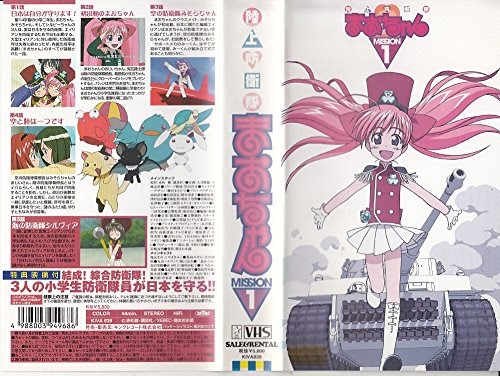 Ground Defense Force! Mao-chan is a charmingly lo-fi show. An original anime by Ken goddamn Akamatsu himself (of Love Hina and Negima?! fame) and featuring an early Horie Yui role, it's an extremely weird but pretty funny comedy about Earth, or Japan specifically, being attacked by a race of extremely cute aliens. Because seeing an actual military beat up cute aliens makes the public angry, Japan's defense force consists solely of three eight-year-old girls and their vehicles rendered in endearing, low-grade CGI. It riffs a lot on shows that take war more seriously, your Evangelions and your Macrosses, but the stakes are always comically low, and I laughed out loud several times at the gags. It has that early aughts, everyone-just-switched-to-digital-animation-and-productions-look-terrible charm to it.

It also tickled me as a product of 2002 — a time when it was at least conceivable that the government and military might even appear to care about optics instead of just doing whatever they wanted and blanket silencing opposition via accusations of insufficient patriotism. 2002 was a year where nobody could talk about anything but war, a year of being ground down by warmongering and useless government, and Mao-chan really taps into that with a military crippled by personal vendettas, nepotism, and completely unwarranted pride. It perfectly understands, perhaps unintentionally, the overlap between right-wing nationalism and kawaiisou aesthetics as well as the extreme, hyper-real otaku subculture of the day. I don't know that I would go as far as calling it social commentary, but it's certainly critical of that era of otaku culture in a way I really didn't expect.

So we have this all-but-useless squabbling ground defense, air defense, and ocean defense (not a military!) who all talk a lot about the defense of Japan and the homeland, even if their enemies do appear to also be Japanese. (The episodes I watched didn't really get into it.) Akamatsu really is just great at writing gags, and at around 10 minutes, the episodes don't overstay their welcome. I also enjoyed the soundtrack, which is almost entirely solo piano and has a fun chamber music sort of vibe — like you went over to your friend’s house after school and they have to finish practicing before you guys can hang out. A really fun little show I got the chance to experience thanks to our wonderful patrons! 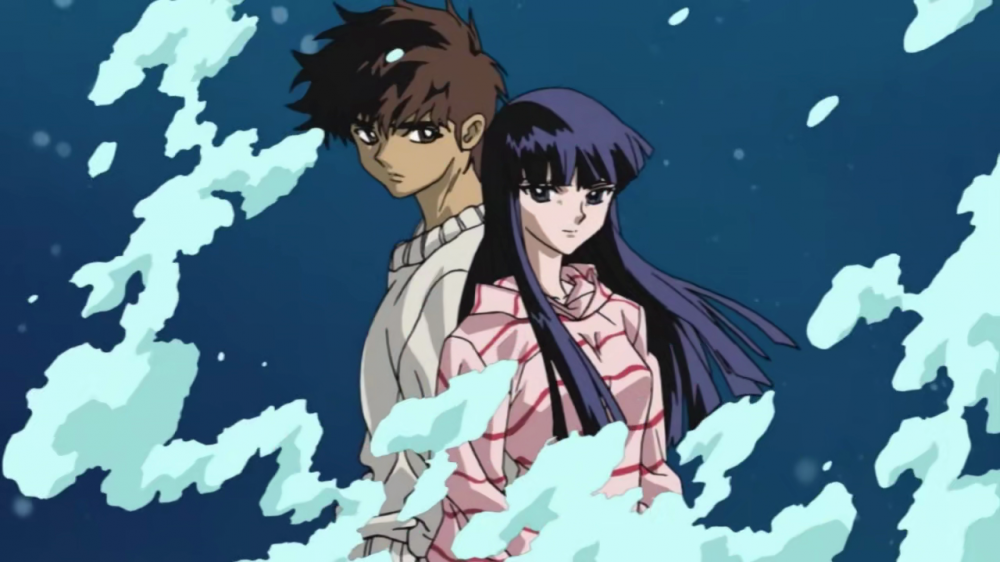 You lovely people wanted me to watch a Rumiko Takahashi show?! I always knew I was your favourite!

Mermaid Forest is a 2003 adaptation of Takahashi's famous Mermaid Saga, a series of interconnected stories about the titular fey and the humans who want or have been granted immortality by eating their flesh. It sits perfectly at Takahashi's intersection of historical fiction, fantasy, personal suffering, and frothy melodrama.

The main characters are Yuuta, an immortal who has been alive since the Sengoku period, and Mana, a modern girl who was held captive by a village of mermaids disguised as humans. Yuuta has spent centuries attempting to find a cure for his immortality from mermaids and, in the first episodes, stumbles across Mana, whom the mermaids have raised from an infant to be used as food in a regeneration ritual. As you might imagine from a story about two groups in conflict over who gets to eat the other one, it's very violent in a way I imagine was kind of shocking from the author best known when it came out (1985) for the harmless fun of Urusei Yatsura.

I’ve rarely encountered a piece of fiction which can successfully make the case that eternal life and youth would be bad, but Yuuta's existence does seem pretty miserable. We see him get murdered, fatally injured, stabbed, beaten, and drowned, over and over and over again, moving from one personal tragedy to the next. He doesn’t even want to simply die. He wants to have a family and grow old, to no longer be an outcast at the edges of society. He wants to belong to a community, and his immortality is preventing that.

When deciding if mermaids should be beautiful fish-women or horrid monster creatures, Takahashi confidently answers, “both!” They're a suitably unnerving supernatural threat as well as a more abstract threat as an in-group with their own agenda. The story flits around time periods and events in the characters lives in a way that really convinces the audience of the theme of immortality while also showing that there is no period in human history devoid of conflict.

My love for Takahashi's work is no secret. And even if the production of this was a little lacking, I really did enjoy it. 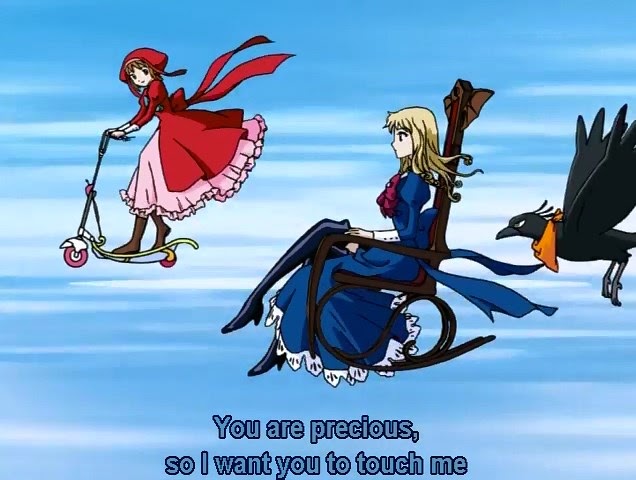 Ultra Manic is a pretty standard shojo by Yoshizumi Wataru (probably best known for Marmalade Boy), clearly riding the wave of genre fiction in the wake of the wizard book by the horrible transphobic billionaire. I still don't think I understand why it's called Ultra Maniac. The term “maniac” in Japanese has a meaning somewhat akin to how we use the word “Otaku” in English, but functionally, the title doesn't appear to have anything to do with the plot. Anyway...

The protagonist, Ayu, is a witch with a little clique of friends searching for some magical stones. In these final three episodes of the series, her boy-girl dance (oooOOOOOOooooooo!) is interrupted by Maya's (the villain) evil plan. This show has this thing going on where the protagonist and her friends are all kind of good and a little boring, and the villain kicks a lot of arse.

Ultra Maniac is the kind of story where your young teen concerns are made literal by the plot. So, the mean girl antagonist is a literal evil witch, and Ayu's concerns about going back to the magic world and having her friend’s memories erased stands in for the very real fear of realizing this period of time in your life is about to be over forever and never come back. I didn’t spend much time with these characters, and it’s pretty well-worn material. But it's not as if there's nothing there, and when the series ended, I was genuinely happy that they got to spend a little more time together.

Honestly, the best thing about Ultra Maniac is how beautifully dated it is. Magic in the world of the show is represented by then-current electronics in the most literal interpretation of that Arthur C. Clarke quote I've ever seen. So this society of magic users capable of inter-dimensional travel just kind of Skype each other, and their magical items are just clamshell PDAs. It's so wonderfully lame. On the one hand, it's so very out of touch in a “How do you do, fellow kids?” way. But on the other hand, the author was born in 1963, and maybe being able to video call someone from your own home really did feel nothing short of miraculous at the time.

Ultra Maniac doesn't seem particularly well remembered, nor does it seem to have ardent fans 20 years on. I can't really say it deserves to either. But I had fun watching it and will remember it fondly from now on. 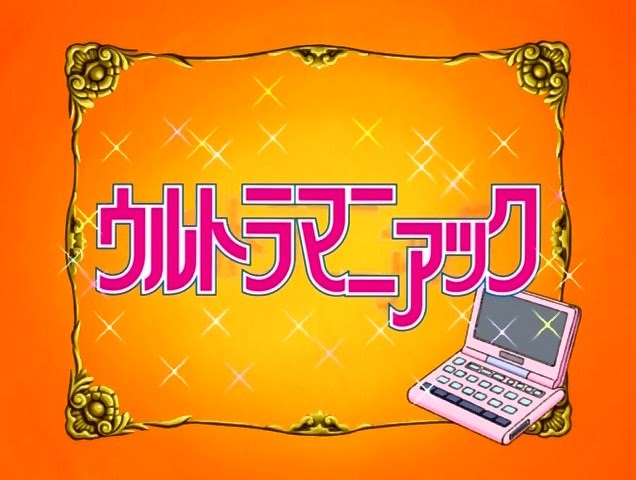