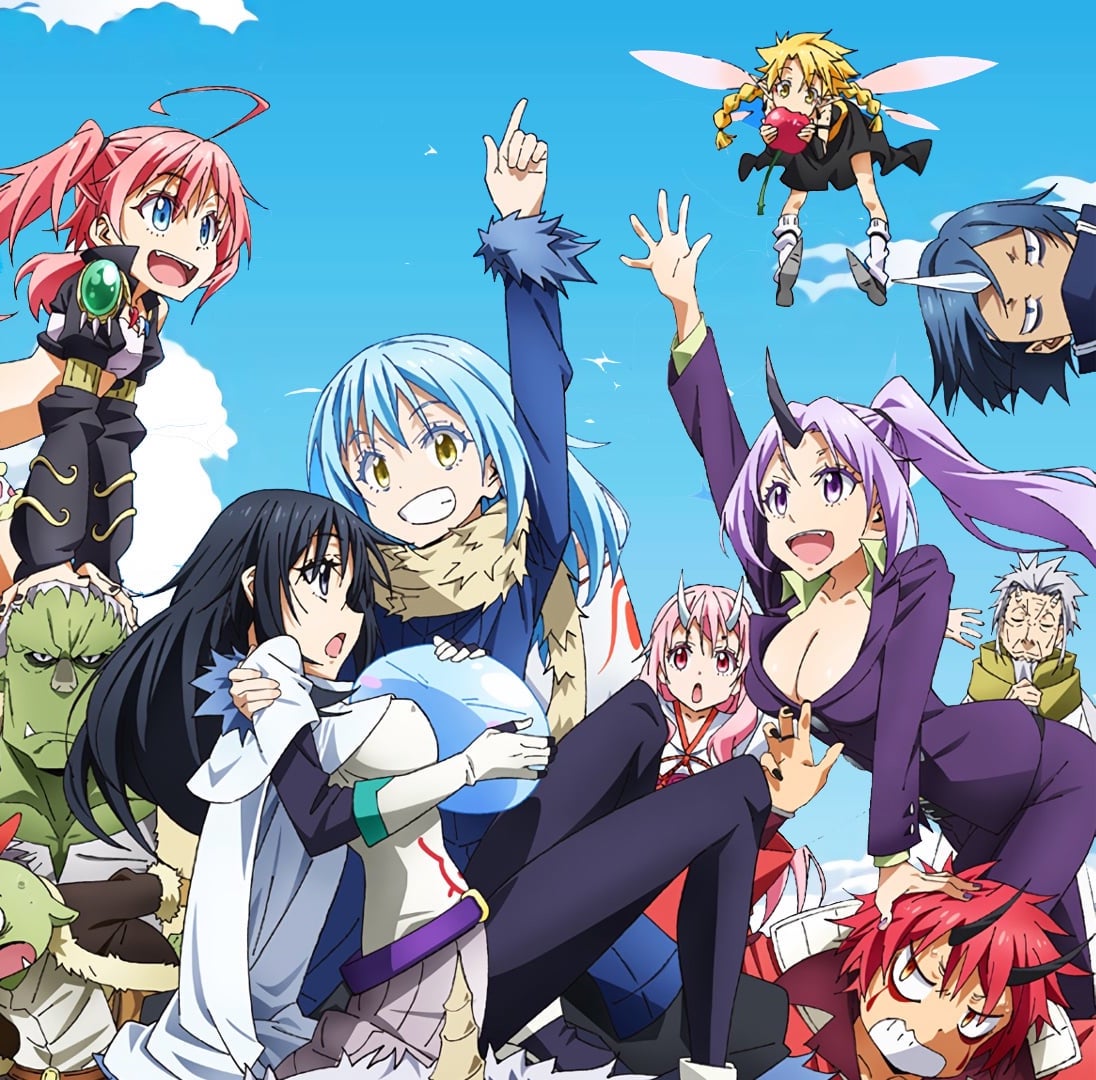 At Otakon 2019 in Washington, DC we had the opportunity to sit down with two of the creators behind That Time I Got Reincarnated as a Slime, an anime TV series in the popular “isekai” or “transported to another world” genre, based on the light novel series by Fuse with art by Mitz Vah. Unlike most isekai, however, this series doesn’t stick to the conventional narrative of the outsider turned legendary hero; instead, the protagonist finds himself reincarnated as a non-threatening slime monster!

In this interview we discuss the state of the isekai genre and the process of adapting Slime for TV with assistant director Atsushi Nakayama and character designer and opening/ending director Ryōma Ebata. Outside of his work on Slime, we also cover Mr. Ebata’s career as an animator, in which he is known for his unique style of motion that incorporates detailed, carefully observed human motion including subtly swaying limbs and exaggerated walking sequences.

Thank you to Otakon 2019’s press and guest staff including Alyce Wilson and Gregg Turek, as well as Mr. Nakayama and Mr. Ebata, for the opportunity. Enjoy!

Ani-Gamers: How are you enjoying Otakon so far?

Ryouma Ebata: It's fun. There are a lot of sexy women.

Atsushi Nakayama: It looks like everyone's enjoying themselves, which makes me happy. 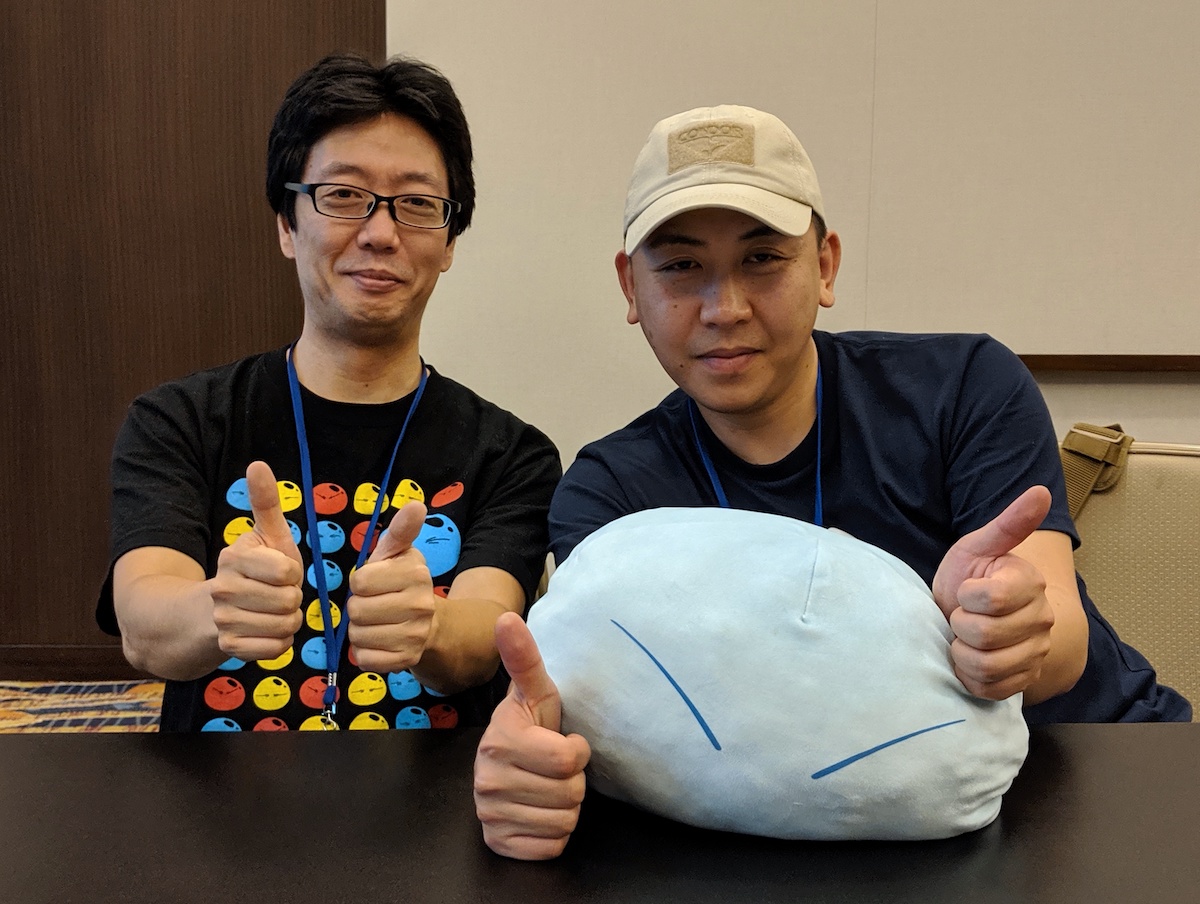 Ani-Gamers: That Time I Got Reincarnated as a Slime is a bit of a parody of the “isekai” genre. Did you have to do any research about the genre conventions to prepare for it?

Nakayama: When we started creating the Slime project, isekai was already a really famous and popular genre. I also worked on some isekai anime in the past, so even without much major research I was already familiar with the genre.

Isekai is the dark part of Japanese working life today.

Ani-Gamers: Isekai is very popular right now. Why do you think that is? What is it that attracts people to the genre?

Ebata: The popularity is going to decrease sometime soon. It’s at the peak right now.

The isekai genre has been popular for a long time, with shows like The Vision of Escaflowne and Mashin Hero Wataru. But now we have this website called Shōsetsuka ni Narō (Let’s Become Novelists). If a novel on there gets popular, then there's going to be an anime adaptation of it. That's the trend we are looking at right now.

It's just the usual flow. Something gets popular and then it'll die off soon.

Nakayama: For Japanese people, we’ve watched the isekai genre since we were young with shows like Aura Battler Dunbine. So when making anime, it works really well because you don't have to recreate the background settings, like the city, every time. The viewers will look at it and they will be like "oh I've already seen something like this before." And the people creating the anime are able to use the time more wisely for different things, like gimmicks and things like that. So it's good for both the audience and the creators.

Ani-Gamers: So you can use conventions of the genre, and you don't have to reinvent things every time?

Ebata: Sometimes yes, but that’s not really realistic. If it's really similar, the audience would obviously say "this is good and this is bad." So it's still a hard [thing to get right]. 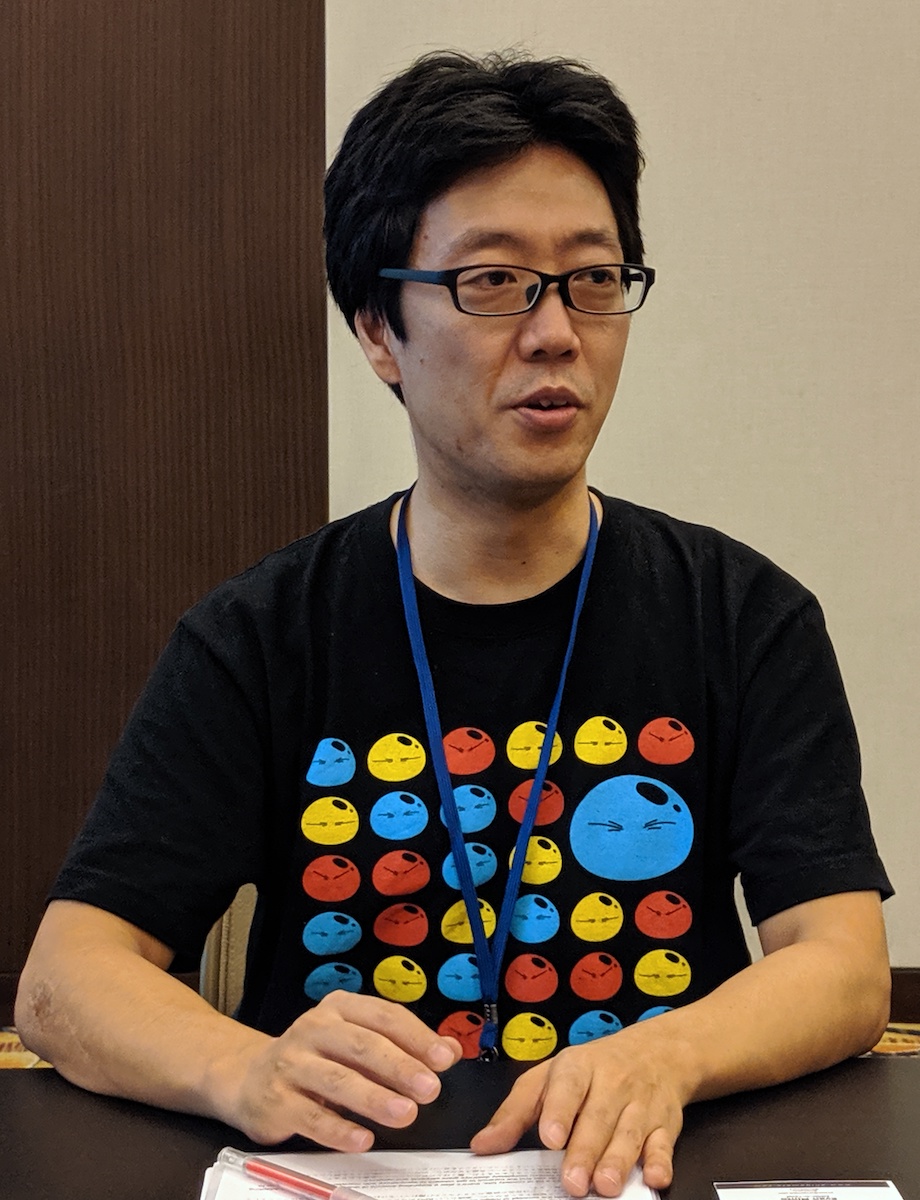 Ani-Gamers: Isekai is a genre that focuses on escapism, more so than many other genres. What value do you think that escapism holds for fans?

Ebata: It's the dark part of Japanese working life today. (everyone laughs)

Nakayama: The whole isekai genre is good because of the “escaping reality” part. That's what the young people in Japanese society are going through in their minds, whether it's economically or politically. And everyone will always think at some point that they want to die and start over again. So that's the darkness of Japanese society today and it shows that. As for Slime, the main character who died was a really good-looking man working at a really big company. The fact that someone who was really high status died, I guess that's a kind of antithesis for other isekai genre anime today.

Ani-Gamers: Right, because the genre usually goes the other direction.

Nakayama: It’s always people who didn't do well in the real world who go to a different world and do better.

Doing a whole anime by myself is actually really hard, but doing an opening by myself is at the borderline of being able to manage and control the quality of the product.

Ani-Gamers: There's a lot of comedy in Slime, but also drama and conflict. In adapting it, how did you strike that balance, getting the viewers to sympathize with monster characters and laugh when Rimiru does things like destroy giant serpents and spiders?

Nakayama: The story itself is really well built and really heavy. But the cuteness in the slime and the goblins and the unique, cute character designs makes it so the story doesn't seem that heavy and serious. I think the part you asked about, killing snakes and spiders, is from the second episode. For that, I let [animator] Tadashi Abiru do the monster design and the scene itself. So we didn't really plan it out at first, then it turned out like that in terms of the comedy.

Ani-Gamers: There's a really cool 3DCG visual effect with the RPG effects and skills in Slime. Who developed that?

Nakayama: When I was reading the Slime novel, there were a lot of skills that were getting unlocked, and I thought it was very video game-like, and I wanted people to feel the way they feel in a game. So I asked [CG producer/director] Yuji Ikuhara to work on it, and he made it possible because I just gave him this brief idea of the RPG-like style.

Ani-Gamers: Mr. Ebata, what went into the decision to have you create the first OP and most of the first ED mostly by yourself?

Do you prefer that over working on individual shots on a larger show?

Nakayama: I think that there are some things you might miss out on, but if you work on little snippets by yourself, then you can still manage.

Ani-Gamers: I also wanted to ask about your really unique walk cycle, nicknamed the “Ebata Walk.” How did you first start drawing your walks that way and were there any inspirations for it?

Ebata: Usually, putting your right leg out and your left leg after occurs within the same timing, which kind of looks awkward. But I figured out that sometimes it can fluctuate, and when it does it looks more natural. So that's kind of where I got the start.

Ebata: I tried that but it felt really terrible. It looked like the character was dragging their leg. And then I had to figure out the best balance where it didn’t look weird or awkward.

Ani-Gamers: Were there any particular inspirations or any animators whose walk cycles you really admired whose work played into that?

Ebata: Yeah of course there are a lot of anime and a lot of good motions that I could look at, but one of my favorites [is something else]. I like watching Western TV shows, and my favorite is Star Trek. All the actors have their backs really straight and are dressed in suits, so it's really easy to look at and see what's happening. It's also my favorite, so I've watched it multiple times.

Ani-Gamers: Which Trek series are your favorites?

Ebata: The Next Generation and Voyager. 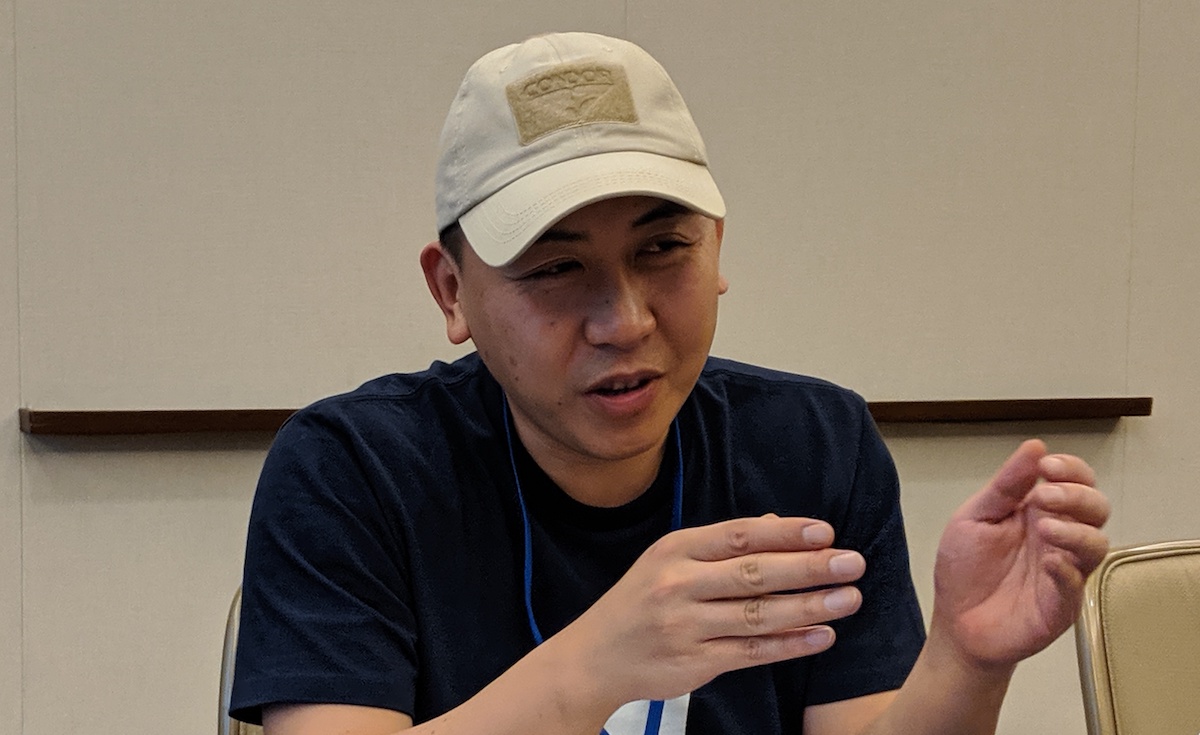 Ani-Gamers: Your animation features a lot of nice details, little bits of anticipation and follow-through, that other animators would leave out. Why do you feel that they're important to include in your animation?

Ebata: I don't think they’re too necessary, but filling in those details might make audiences look at that and think, "oh they're doing something other animators aren't doing, that looks nice." So that's a good point to me.

And of course, I sometimes make mistakes because I'm doing unnecessary things. I look at it and say “I didn't need that.”

Ani-Gamers: Are there any particular animators that you would cite as inspirations for your work?

Ebata: When I started working as an animator, my senpai showed me a film called The Secret of NIMH. When I saw it, I thought the animation was the best of the best and you couldn’t top it. The sword action scene at the end is my favorite.

Check out more coverage of Otakon 2019.