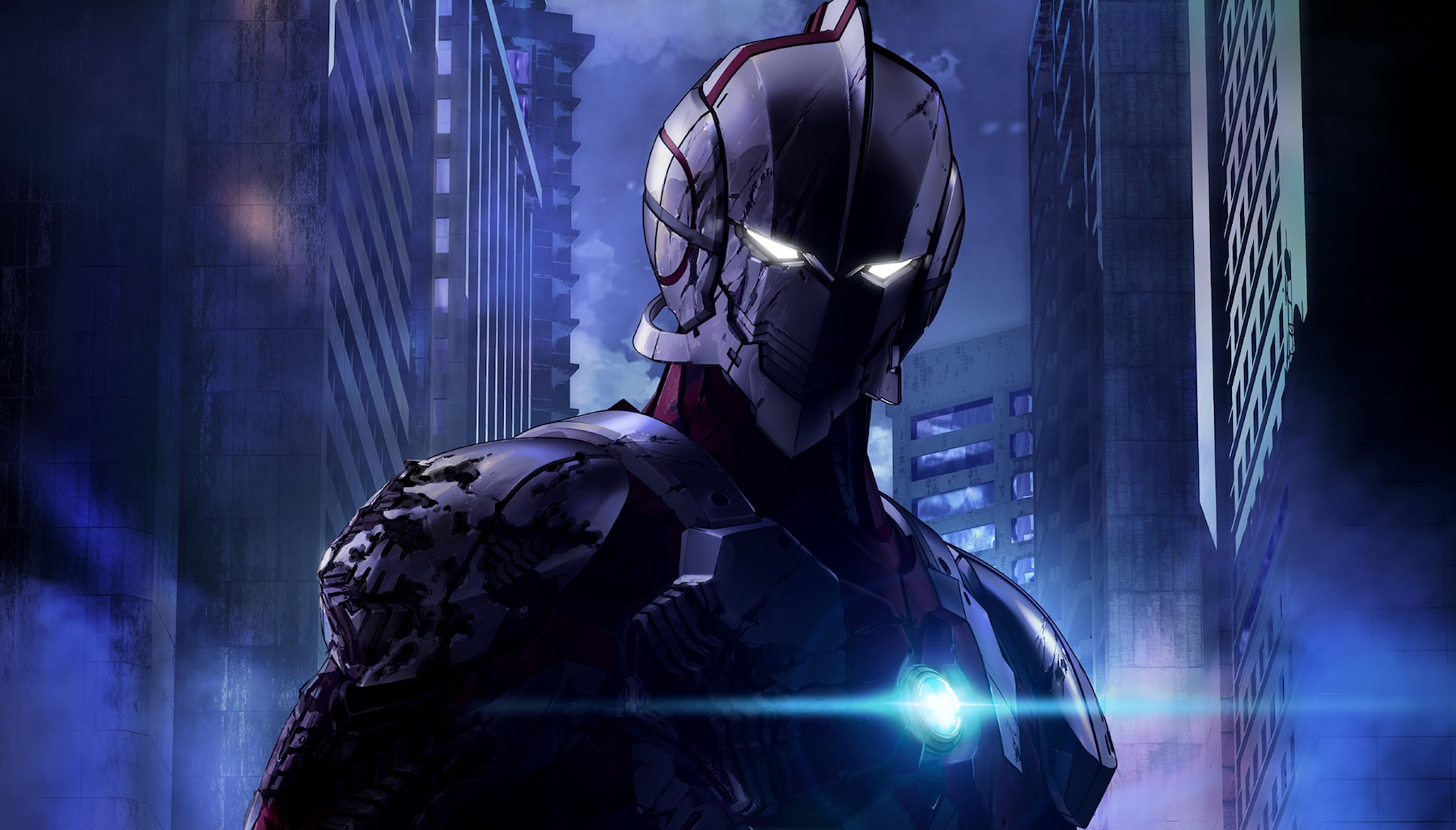 Before Land of the Lustrous, before Netflix’s conspicuous partnership with Polygon Pictures (Knights of Sidonia, Ajin, Blame!), before anime CG was a major part of the industry, there was Shinji Aramaki (Appleseed, Space Pirate Captain Harlock). He was far from the first CG director in Japan, but as one of the most prominent mechanical designers of the 1980s, his turn away from 2-D animation and toward the nascent digital world seemed a harbinger of things to come.

One creator who picked up on that trend was director Kenji Kamiyama, who in the late ’00s moved from successful traditional animation projects like Ghost in the Shell: Stand-Alone Complex and Moribito to a number of CG and hybrid 2-D/3-D projects, such as 009 Re:Cyborg and Napping Princess.

Both Aramaki and Kamiyama’s CG work has been met with mixed reviews, but they’ve stuck at it, and now they’ve joined forces on an upcoming CG entry in the classic Japanese superhero franchise Ultraman, which the two will direct together (a relatively rare arrangement in anime). Just last week, Netflix announced that they would stream the series in North America, and not long after, Crunchyroll revealed their own Aramaki/Kamiyama project: a Blade Runner anime co-produced by Adult Swim.

In these two interviews, conducted this past spring at AnimeNEXT in Atlantic City, NJ, we chat with the pair about the strengths of CG animation, their creative process, and some of their previous works.

Thank you to AnimeNEXT guest and press staff, as well as Mr. Aramaki and Mr. Kamiyama, for the opportunity. 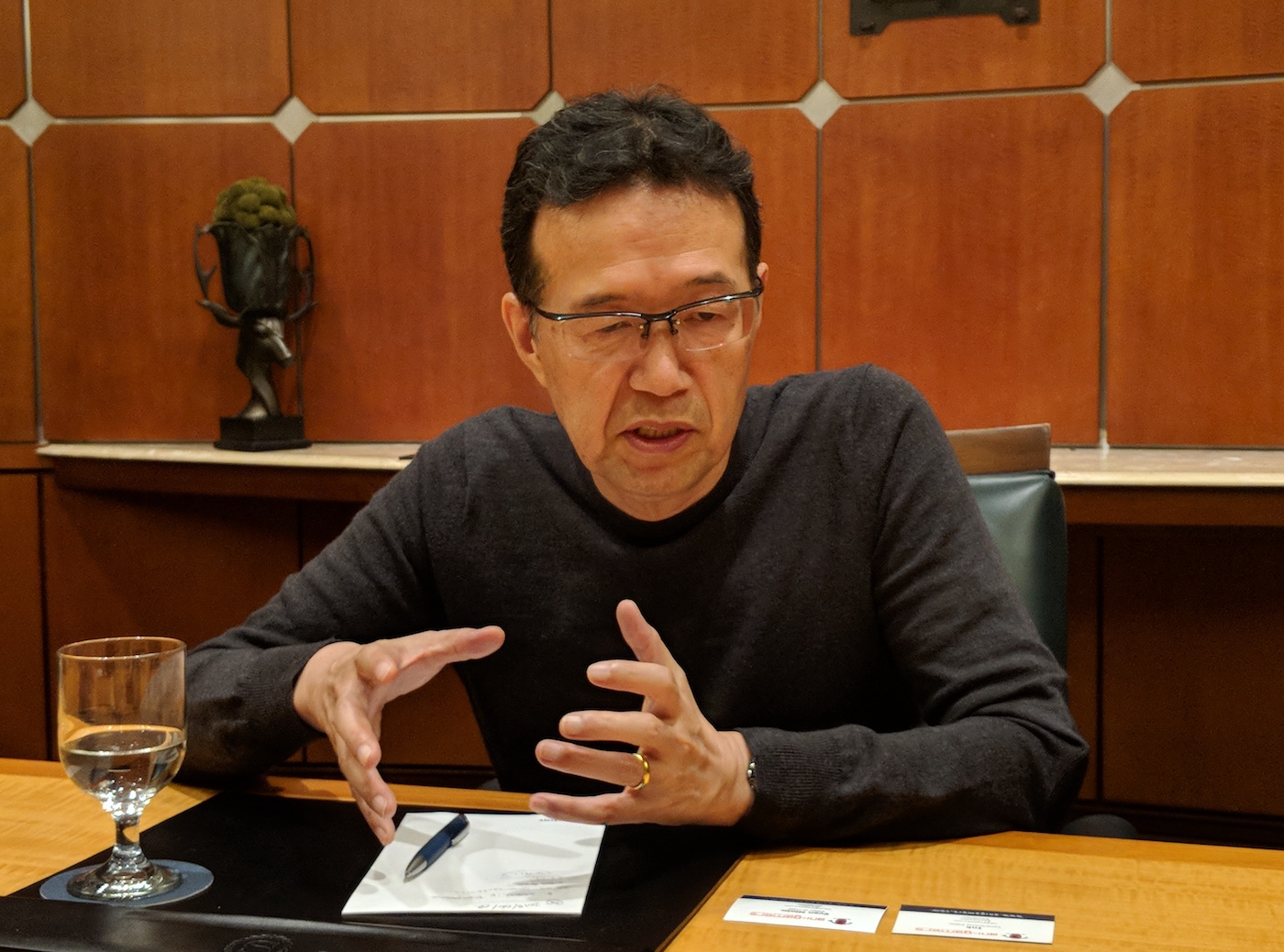 Earlier in your career you designed mecha and worked on a lot of 2-D animation, but then you made a really big shift to 3DCG. Obviously CG can save a lot of time in terms of reusing models and things like that, but do you think it also opens up possibilities for the kinds of stories, characters, and designs that can be expressed in animation?

What actually got me into CG works was that, when I was doing mechanical design, which is basically making a very complicated thing to be used in an anime, the designs could be very hard to draw out by hand. I'm not an animator, but occasionally there are animators who actually really like drawing out all the detailed, complicated technical things. But for the most part, people do not find that very fun. For those people, I always felt a little like I was hurting them by doing it, so I decided that if I did CG, then I could do these very complicated designs, and that's sort of what got me into it. From there I also realized that you can also do backgrounds and everything else in CG and that's what got me started doing full CG works.

To respond to your actual question, I think a great advantange of full CG anime is that you have full camera control. I think that is a great directing advantage.

One other thing is that, while this might be misunderstood, I think with CG works you can allocate a lot of the non-creative work to the computer. You can let the computer do a lot of the non-creative stuff, which lets you focus on the creative work. With hand-drawn animation, there are a lot of extremely amazing people in the field, but lately it's been hard to get hand-drawn animation staff. With CG animation, you of course still need a bunch of staff too. But comparatively I feel like it matches my working style better, so that's why I do CG.

What's your mechanical design process like? How do you take an idea from concept to finished product?

Initially when I was doing this, there were of course not many computers that could help with the process. So basically my process was just drawing tons and tons and tons. Lots of sketches for a given thing. Eventually, from all the sketches, I would find my ideal design. Lately with CG my process has changed a little bit. I do initial sketches, but then I switch fairly early on, once I have a basic idea of what I want to do, to a sort of rough CG, and then I brush that up until the idea forms, then switch back to doing a sketch for the final design. This is a much easier process for me now that I don't have as much spirit in me to do tons of sketches.

You do the modeling yourself for those prototypes?

Essentially I do most of it myself. I don't necessarily do all the super detailed parts of everything, but definitely I do all the basic design myself.

It's not the production version, right?

Correct, I don't do that, but I do hand over the basic proportions and stuff. 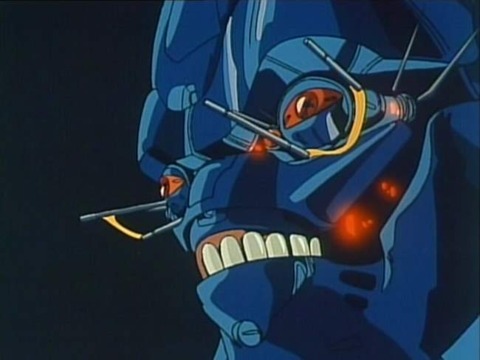 There's a great mix of the organic and the inorganic in the mechanical designs of Bubblegum Crisis. How did that come about? Was it handed down or was it something you came up with?

For Bubblegum Crisis, the exoskeleton suits are called hardsuits. The idea for them originally came from Kenichi Sonoda, he did the original design. I was looking at that design from the side and I really liked it. And I used a similar idea or technology but wanted to make something scarier for a villain. The basic inspiration was actually Terminator. We took the Terminator idea and sort of made it more into anime, like something scarier that we could use as a villain, and that's how we made the Boomers. The Alien design was also an inspiration. 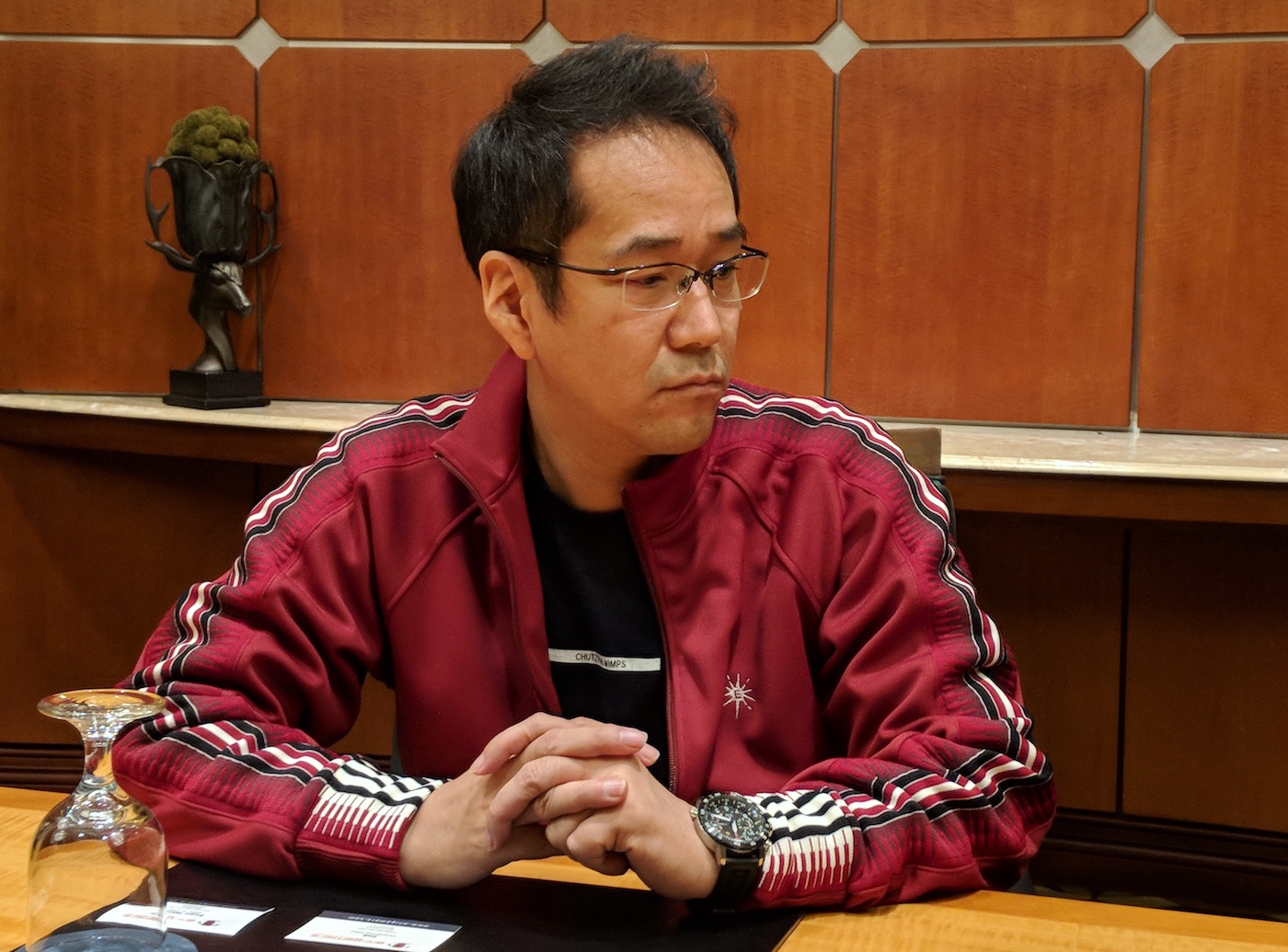 A lot of your recent works have been full 3DCG projects. Why did you decide to go that route as opposed to traditional 2-D animation? Do you think that's where the rest of the industry is headed?

The budget for works hasn't really changed much for a while and as a result, by today's standards, young animators are not making very much at all, which is why they probably aren't interested in joining the industry.

Young animators lately have been using CG more and have been starting to like it. Because of that, in Japan I think the number of 3DCG works will increase in the future. As a challenge I wanted to try to make a popular 3DCG anime, so I ended up working with Mr. Aramaki as double directors on Ultraman.

You mentioned something similar in the panel yesterday too, that the number of hand-drawn animators in Japan is going down. Why do you think that is?

I think there are a number of reasons. One of them is that the budget for works hasn't really changed much for a while and as a result, by today's standards, young animators are not making very much at all, which is why they probably aren't interested in joining the industry. 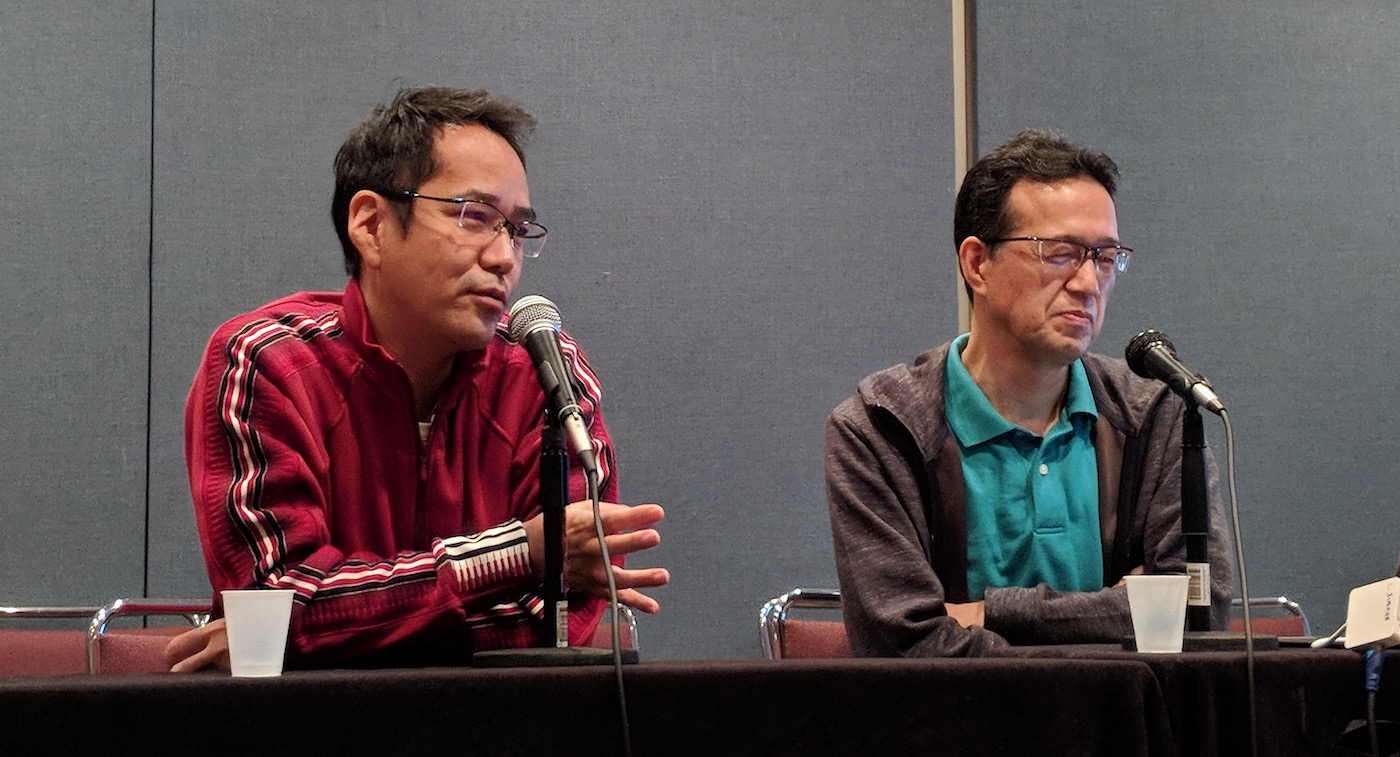 In terms of CG animation, another thing you mentioned in the panel is that you're spending a lot of time on Ultraman directing and working with live actors for motion capture. How has that experience has been different from working with animators and voice actors to get those performances?

For hand-drawing animators, each one is an artist. So there's the image of what the director wants to happen, and then there's the animator's image of what they want to create. And sometimes the animators can have a hard time sort of lining up the image to the one that the director wants. For 3DCG anime, the actors, even though they’re also artists, they sort of have a shared understanding of what kind of action is desired by the audience. And very importantly, with live acting, there's a really tight and fast feedback loop. The director is there and able to give feedback on the performance. For drawing it's totally different. Sometimes it can take up to a month to get feedback on drawings. And as a result, there can be a gap formed in the understanding of what the work should look like. That's one thing I enjoy about 3DCG directing: that fast feedback loop, where we immediately get to give that feedback to the person.

Are you using keyframe animation to add corrections on top of the motion capture?

How was working with Dai Sato during the writing process of Ghost in the Shell: Stand-Alone Complex?

I generally like to focus on the script myself as a director. In the case of Ghost in the Shell, I decided the big picture concepts for the scripts, and then the scriptwriter Dai Sato, well, he has his own sort of unique imagination of how to write scripts. We got him in later in the process and discussed per-script about how to do things. When I’m talking with him, we actually just get along very well. As a result, it's just a very creative process talking with him. The ideas flow and it's just really fun.