Ani-Gamers’ light novel review podcast, the Ani-Gamers Book Club, so enjoyed the light novel JK Haru is a Sex Worker in Another World that I reached out to the author, Ko Hiratori, for an interview. JK Haru, written by Hiratori with illustrations by JTA Yamada, examines a number of traditional light novel conventions in a story about the experience of sex work in both the real world and in an isekai setting (that is, in a “transported to another world” story, for those still unfamiliar with the term). In this exclusive interview, I had the privilege of talking to Ko Hiratori about the novel’s creation and themes.

A full, in-depth AGBC podcast review by David Estrella and myself is available as a reward for $5 patrons on the Ani-Gamers Patreon.

Ani-Gamers: First off, would you like to introduce yourself to our readers?

Ko Hiratori: Hello, my name is Ko Hiratori. My literary debut was the light novel JK Haru is a Sex Worker in Another World. I live in Hokkaido, Japan, and work in an office but write light novels as a hobby.

Ani-Gamers: What are some works that have influenced your writing? Things outside of literature are fine as well.

Hiratori: As a child I was into Doraemon instead of looking at picture books. When I became a student was when I started to read a lot. The books I can recall having a big impact on me at the time were The Grapes of Wrath, Fight Club, Ode to Gallantry, Franny and Zooey and Lord of the Flies. In Japanese literature specifically, Record of Lodoss War, The Decagon House Murders, Genocidal Organ, and Majin Gakuen.

There's lots and lots that I could recommend but those are just off the top of my head.

Once I started working I started reading manga a lot more. I like Demon Slayer and Attack on Titan, and of course masterpieces like Akira, Parasyte, and Dragon Ball. If something gets popular, I'll always want to read it.

Anime I've enjoyed recently has been the Demon Slayer adaptation and A Place Further than the Universe. I don't really think I can write about any games at the moment. (laughs)

“JK Haru is a story that takes place in a society of exaggerated male supremacy, but even so the reader is still able to sympathize with the women's circumstances. It's kind of a cheat, a way for Haru's strong heart to inspire the others in the story to work at making a better world.”

Ani-Gamers: Speaking of literature, isekai stories are pretty popular at the moment, aren't they? Although JK Haru isn't such a typical isekai story, what do you think the appeal of isekai is? Do you have an opinion on the genre as a whole?

Hiratori: Although there are a lot of things that have a boom period of popularity, I think the appeal of isekai is the fantasy of “I want to imagine a new world only for me,” and “I want to go to that world”. Maybe it's so resonant because it's a fantasy everyone has had at some point. “Next time, I'd like you to show me your world” kind of thing.

JK Haru is set in a world I wouldn't want to live in, but the point of that was to more or less follow the “classic” rules of isekai stories up until then. (laughs)

At the moment we're all coping with an unprecedented feeling of being cooped up. Don't you think that, at least for the time being, people who wish to go to a fascinating new world certainly aren't going to go away?

Ani-Gamers: That's the power of books, isn't it? Whatever is happening in your life, the power of imagination can help you escape.

Prostitution in Japan has a complicated legal status. Why did you decide to tell a story about this subject through an isekai?"

Hiratori: You need to understand that even in modern Japan there's many compelling reasons people might work at a fuuzoku such as poverty or becoming unemployed. It's not an issue with any kind of easy solution.

JK Haru is a story that takes place in a society of exaggerated male supremacy, but even so the reader is still able to sympathize with the women's circumstances. It's kind of a cheat, a way for Haru's strong heart to inspire the others in the story to work at making a better world. I wrote it with the intention that this would also be the hope of the reader.

Ani-Gamers: The sex workers in JK Haru go through a lot of horrible things but also have a lot of happiness. But a thing that really caught my attention was the use of contraception. Normally in fantasy and isekai stories the idea of contraception is ignored, or it just has an easy solution. But when Haru uses contraception, the reader is really made aware of her body, and it's critical to the overall narrative.

Hiratori: I did try to keep in mind what was normal for a fantasy story, but more than that I was conscientious of what felt real. Kind of like I was trying to please the readers who would be very interested in that sort of thing as well as the people who would want to skip over it. (laughs)

In the end it was another way to demonstrate Haru's strength and tenacity to the reader. I did kind of simplify the issue of contraception and venereal disease though. Although if I could get away with it I wouldn't think about either of them. 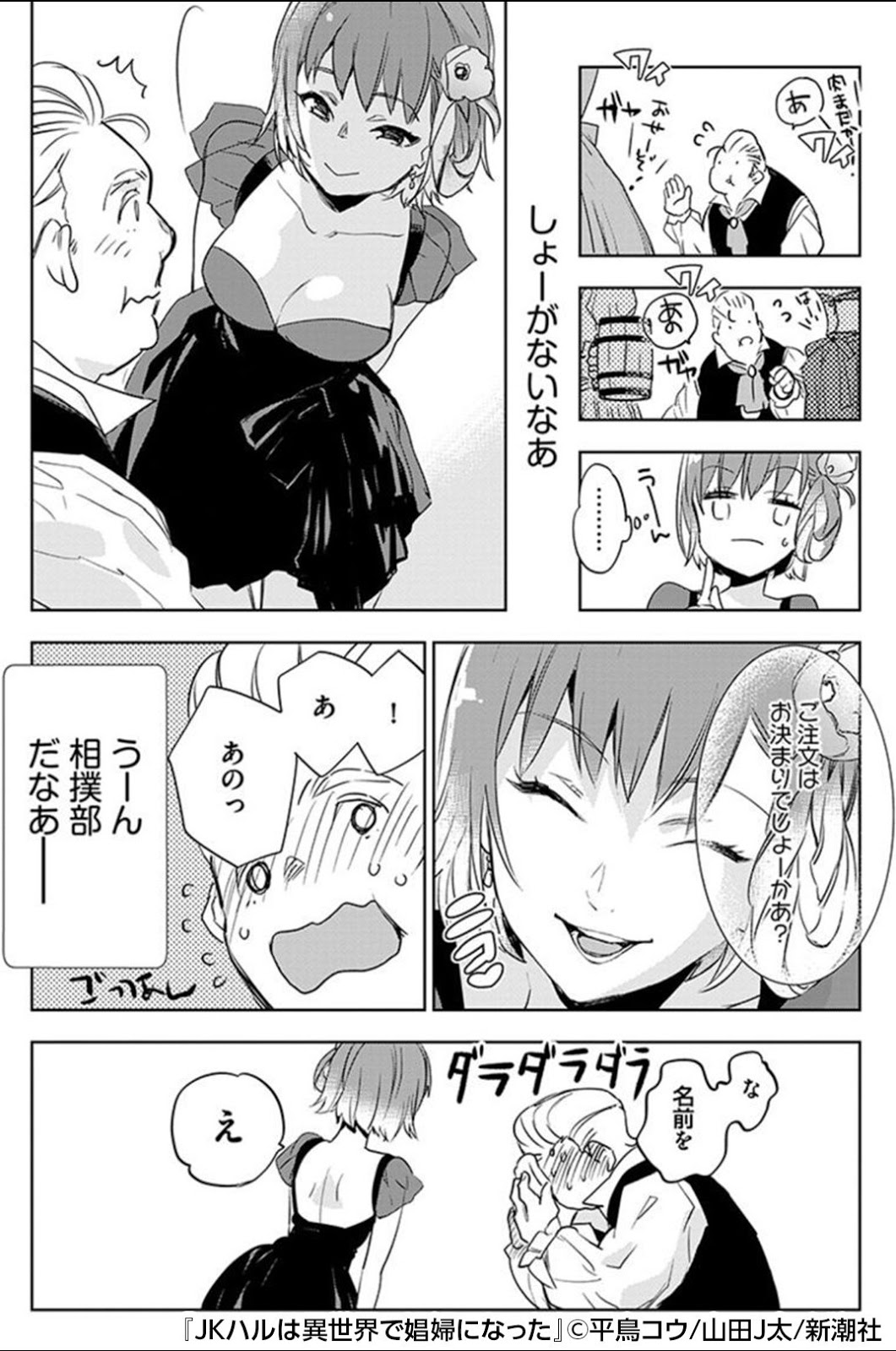 Ani-Gamers: When you were writing JK Haru, how much importance did you place on the real experiences of sex workers?

Hiratori: Actually, I didn't do a lot of research, but I thought a lot about the isekai setting and that of the shop, and thinking about how Haru would advance herself in the shop was an interesting process.

Oh, but the first time Haru takes Sumo to the second floor, I did some research into how a sumo wrestler has sex. Some readers expressed their gratitude at having found it very helpful that I had considered how people with very different bodies would have sex.

Ani-Gamers: There was a really fascinating contrast between Haru's appeal as a high school girl in a world where nobody has any appreciation for that, but Haru also felt a lot more realistic as compared to the “JK” character archetype. The character Chiba also made me feel Ah, yes, I've known this kind of person in the past.

Hiratori: Haru very much feels that being a “JK” is a large part of her identity, and she's determined to enjoy it and drag everyone she knows into performing that part of herself. Similarly, Chiba is desperately holding onto being an “Otaku” as his reason for living, the kind of person who won't ever consider the source of his fixations. The two are very similar, but because their outlook is so very different they won't ever be able to understand one another. 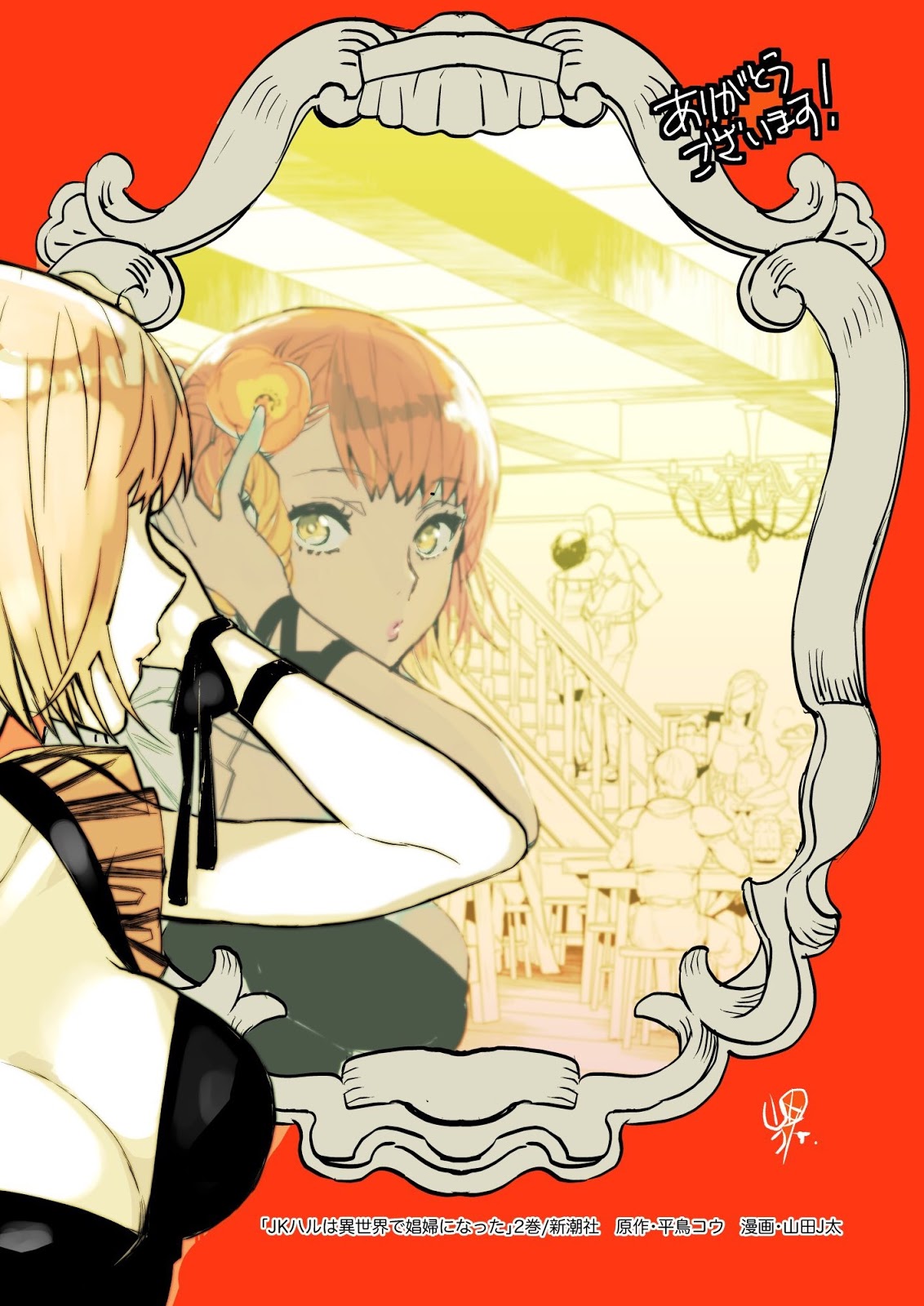 That being said I don't think most people have a very memorable personality when they're a teenager. I had a lot of fun writing those two, you've really given me nostalgia.

Ani-Gamers: Thank you very much for answering our questions. I'm really looking forward to your next book. Is there anything you've wanted to say thus far but haven't had the opportunity to?

Hiratori: Thank you as well. Up until now I've only really had people who read my stories on the web, but thanks to JK Haru a lot of people have had the chance to see my work. I'd love to write another book that people will have the pleasure of reading. But until then, thank you for all your support.

For even more JK Haru discussion, check out David and Inaki’s full podcast review on the Ani-Gamers Book Club!