I was pulled away momentarily from the Fate/Grand Order mobile game to talk with the people responsible for the development of what is perhaps the most addicting game I’ve played on my phone since Puzzle & Dragons. Aniplex president Atsuhiro Iwakami and director Yosuke Shiokawa granted Ani-Gamers a rare opportunity at Anime Expo 2017 to discuss the successes and challenges of developing Fate/GO, now available in a North American region release. Although the interview was conducted in a ‘round-robin’ style session with other journalists, the interviewees were gracious enough to stay with us for an extended period of time. Questions from the other interviewers are marked with Q.

Q: What prompted the decision to bring Fate/Grand Order to the US?

Iwakami: One of the reasons why was that when I was here last year at AX, I saw a lot of Fate/GO cosplayers, even though it wasn’t officially available in the US yet. Seeing that, it was decided that it would be best to localize it so that everyone can enjoy every aspect of the game.

Shiokawa: From our data on the development side, we saw a lot of players accessing the game from North America, even though it’s only available through the Japanese mobile marketplace. Technically, it’s possible but not recommended so we wanted to properly release it in the US so players can have the most optimized settings possible.

We ran an in-game survey in Japan twice asking people how they discovered the Fate series. In the first survey, not many people chose Fate/GO as their entry into the franchise. During the second survey, a lot more people responded that Fate/GO was their gateway.

David (Ani-Gamers): There’s a rumor that Fate/GO brings around $40 million dollars per month. Even if that’s not true, there are some frighteningly devoted players, so I can only assume that it’s been successful in Japan. How has the success of Fate/GO influenced the growth of the Fate franchise?

Iwakami: We cannot comment on rumors or officially announce a number. Certainly, because of Fate/GO, people have greater access to other works in the franchise. We do see it as a gateway to the rest of the franchise, for sure.

Shiokawa: We ran an in-game survey in Japan twice asking people how they discovered the Fate series. In the first survey, not many people chose Fate/GO as their entry into the franchise. During the second survey, a lot more people responded that Fate/GO was their gateway.

Q: Are there plans to bring Fate/GO to regions besides North America, like Europe or Southeast Asia?

Iwakami: We are thinking about it, we would like to release the game in more places, but we have to clear several hurdles like compliance with local laws.

Q: One of the events in the Japanese Fate/GO involved a collaboration with another Fate title, Fate/Extra CCC. Since that title was never localized in English, will that event come over to the English game?

Iwakami: Right now, we can not be certain but our intentions are to bring Fate/GO over exactly as it is in the Japanese region.

We want to keep the experience for North America as close as possible to the original Japanese release, however we will adjust the parameters of the events according to the data we have for the player base.

David (Ani-Gamers): As someone who spent nearly six months to clear Camelot, I have to know, whose idea was it to raise the difficulty so high? It is vastly more challenging than any other Order before it. Which developer was sadistic enough to design the Gawain fights and have they offered players a formal apology yet?

Shiokawa: We didn’t raise the difficulty for the sake of it. For Camelot, the Knights of the Round Table are supposed to be the strongest beings in the realm. To tie into the scenario, that’s why they are that powerful.

Q: What sorts of things did you take inspiration from when designing the battle system of Fate/GO?

Shiokawa: When we started designing the game, we wanted to properly express the world of Fate and how it ties into the battle mechanics, so it wasn’t like we could look at other games and simply copy things over.

So, for example, there’s the relationship between Masters and Servants, however that does not necessarily mean that the Servant always listens to the Master. That’s why the Command Cards are random each turn.

David (Ani-Gamers): Fate/GO, compared to other mobage, has some deeply gratifying limited run events, perhaps because they are essentially new stories that play out in real time and players affect the outcome of the rewards. How do you expect the Americans to compare to Japanese players?

Shiokawa: Like we mentioned before, we want to keep the experience for North America as close as possible to the original Japanese release, however we will adjust the parameters of the events according to the data we have for the player base, such as tweaks to health meters. 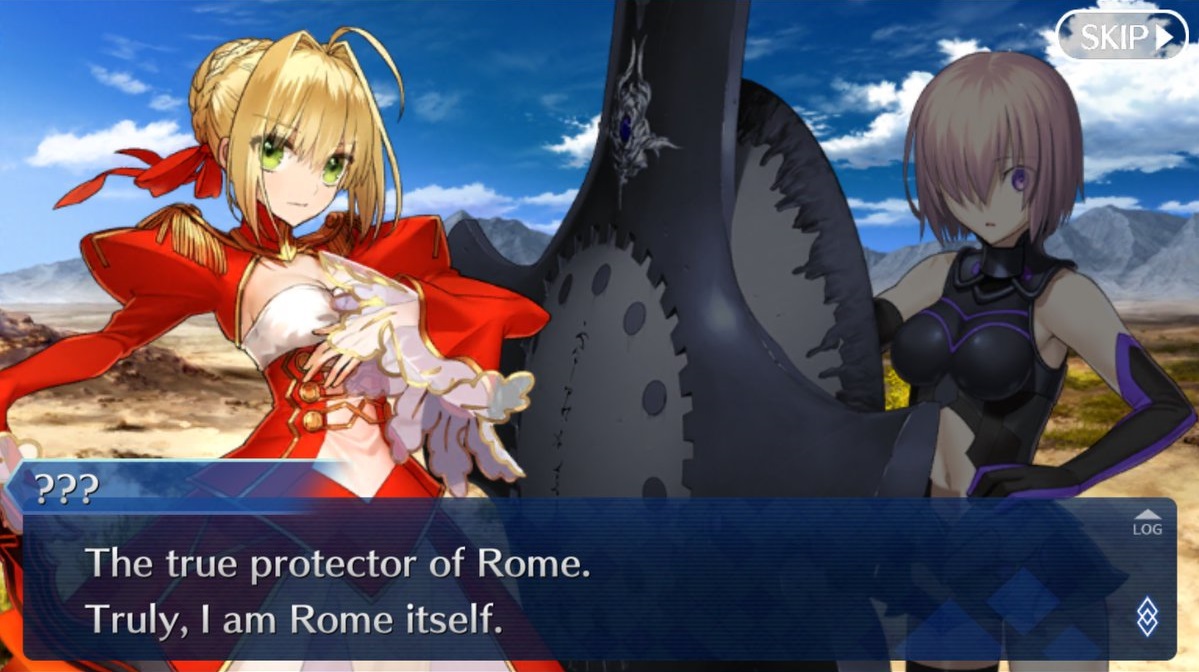 Q: What sort of difficulties were there in translating the script? The style for Fate can get fairly poetic, so what was that process like?

Iwakami: The system translation was handled by DELiGHTWORKS. As for the story, we’ve been working with Aniplex of America. We have outsourcing companies to help us work on this too. As you know, the volume of text is quite large. Every writer on Fate/GO has their own unique way of writing.

For the record, we’ve heard all the feedback regarding the translation. We’ve read all the comments and we‘re working hard to improve the translation. The best thing about working on a mobile game is that we can keep improving it.

Requests for an option to skip the Noble Phantasm is something that comes up in feedback every single day.

David (Ani-Gamers): Being completely honest, there is almost no reason to use the 1- and 2-star servants. A lot of balancing has been done for the 4- and 5-star servants, so for what reason do these low power servants continue to exist?

Shiokawa: The buffs and the balancing weren’t done because of the rarity. In Fate, every single one of the Servants is a main character, and we express that by how we balance the game.

Q: Can we expect any deviations in the game between the American servers and the Japanese servers?

Iwakami: Currently, there is no plan to make any changes. Our goal is to keep the experience as close as possible to the original. Say there’s a 5-star Servant that I really want, but it never drops. That’s part of the experience and so you end up finding a way to go through the game with these 3-star or 1-star Servants.

Like in Fate/stay Night, Rin tries to summon Saber, but she doesn’t get Saber. That’s the sort of experience we want for everyone.

David (Ani-Gamers): One of the longest running gags in the Fate/GO manga is about how you can’t skip the Noble Phantasm animation. Is that really something that comes back in player feedback a lot?

Shiokawa: Requests for an option to skip the Noble Phantasm is something that comes up in feedback every single day.

In all seriousness though, the Noble Phantasm is something integral to Fate and we don’t want to undermine that in any way, so that’s where we find ourselves.

Iwakami: Let’s say you can skip the animation, then it will feel like something is missing. 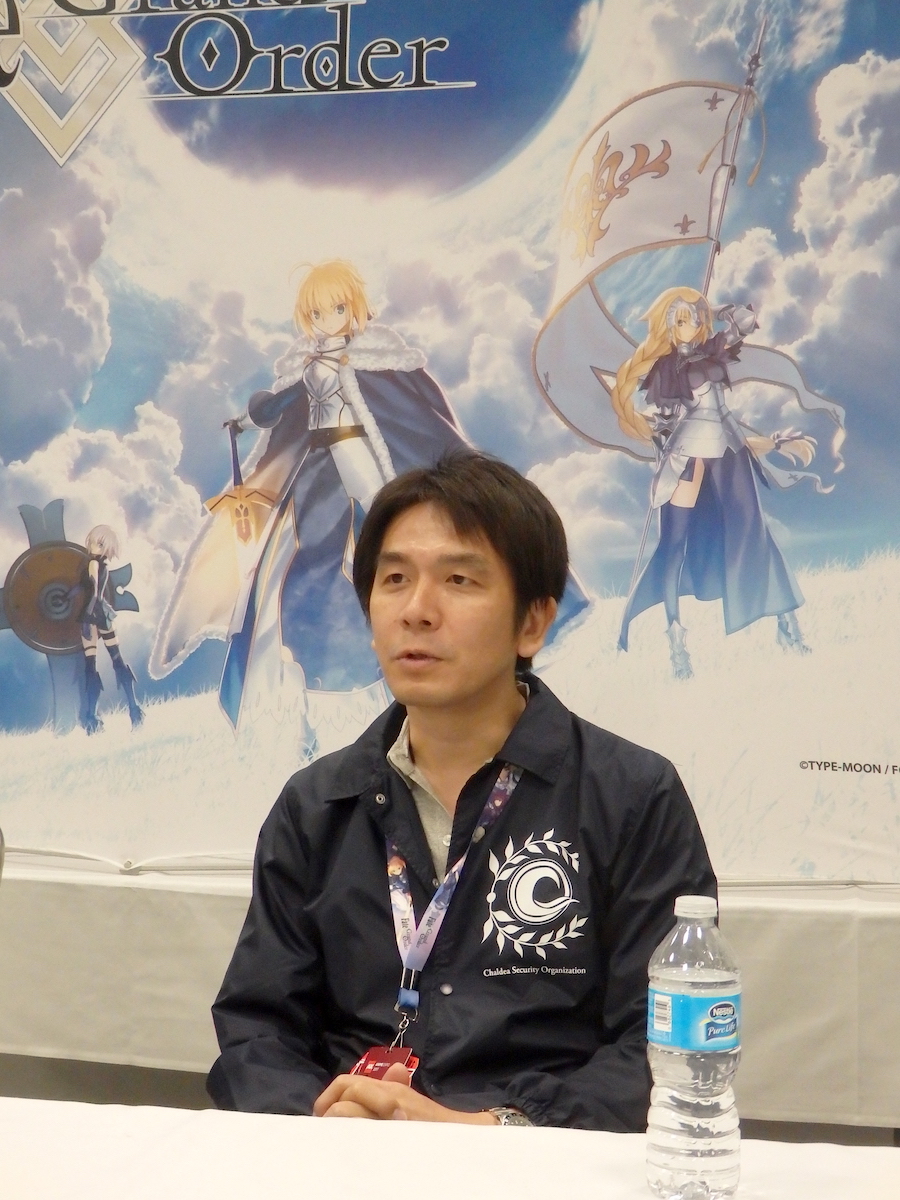 Q: Are there plans for more TYPE-MOON collaborations in the game… maybe Tsukihime?

Iwakami: Between Mr. Shiokawa, Mr. Kinoko Nasu, and myself, Mr. Nasu is always saying “what collaboration are we going to do next, I have a couple events in mind, I want to do this, I want to do that.” That’s how we start out.

Shiokawa: Nasu has, in public, already put it out there that maybe he’ll do a Tsukihime collaboration. There’s a sort of obligation now that we should do it soon…?

David (Ani-Gamers): Recent events in the Japanese version exclude players that haven't completed the main storyline. Was it not possible to scale the difficulty of the event for players that did not finish Solomon yet?

Shiokawa: It wasn’t because of the difficulty, it was for continuity reasons. The reason why the CCC event required clearing Solomon is because the event covers what happened after Solomon. A lot of details would be missing if players skipped through to CCC.

Q: Who are your personal favorite Servants in Fate/Grand Order?

Iwakami: Just based on power and how fast you can grind those experience points, I would say Raikou is my favorite.

Shiokawa: Not every Servant gets equal time in the gacha. It depends on what sort of event is running at the time.

Q: People discovered in the North American Fate/GO that there are several Servants preloaded into the game already before they appear. Will American audiences be getting an accelerated pace for content compared to Japan?

Shiokawa: It was a different situation before for us since these assets weren’t made yet for the game. Now, even though the North American version already has these Servants, that doesn’t mean we’ll simply release all these Servants at once. It might be slightly different than with Japan, but it won’t be like “boom, here’s all the Servants.” It’ll depend on the story. 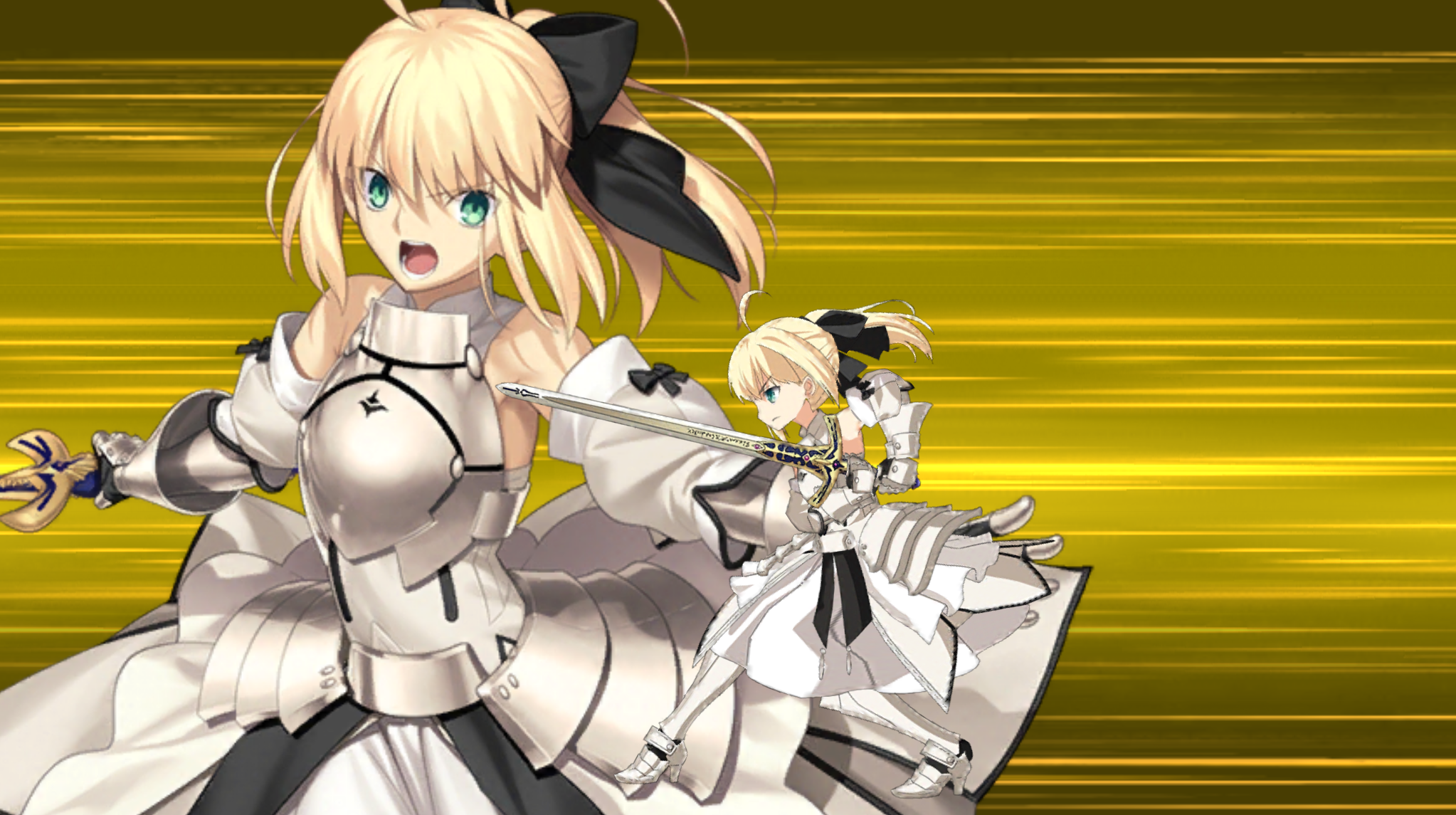 David (Ani-Gamers): Certain drop rates for materials to ascend Servants are very low. There won’t be any deviation on this for the American release?

Shiokawa: There are currently no plans to adjust the drop rates on materials in other countries.

Iwakami: Right now, we’ve only released the game up to Chapter 2, so we want the sort of progression arc that was experienced in Japan for players here. As you progress through the story, there’s all sorts of developments and there are more chances at getting those materials.

Q: What was your favorite memory while working on this game?

Iwakami: The release of Garden of sinners was the first time I worked with TYPE-MOON and Nasu, when I worked as a producer at Aniplex, so to see Shiki Ryougi again in the Garden of sinners collaboration was a very memorable moment for me.

Shiokawa: I have to agree, that was my favorite project. I joined the development team halfway through release and this was my first large-scale project while working on Fate/GO. It taught me a lot for future events we ran after the release and it left a big impact on me.