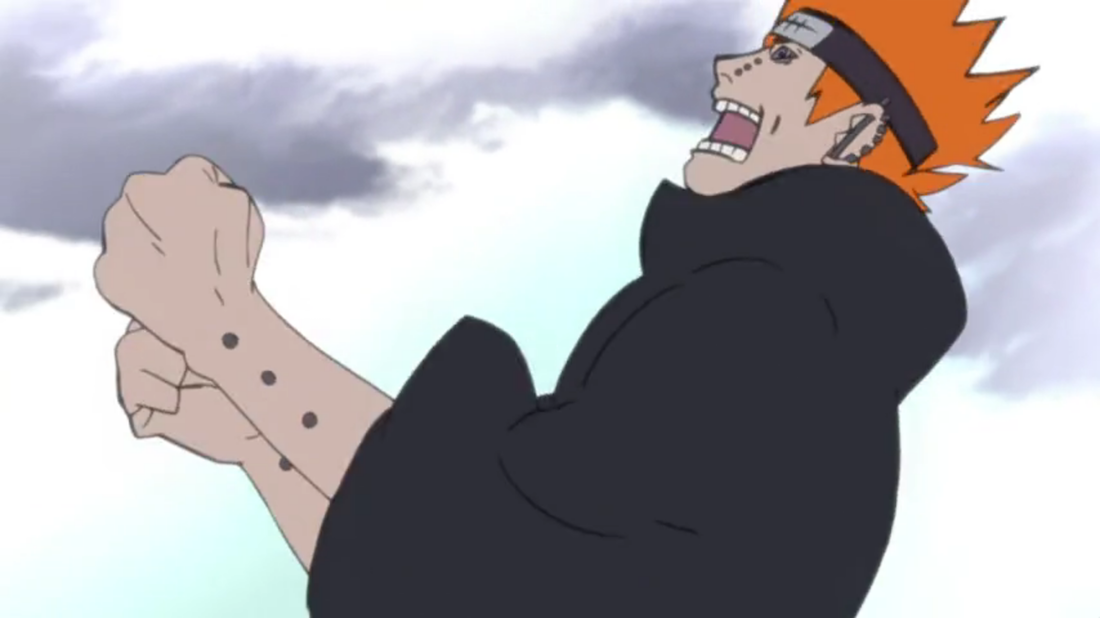 Most animation in Japan is still drawn on paper (before being scanned into a computer for coloring and compositing), but in the past few years the industry has begun to lurch toward its inevitable digital future. The harbingers of this evolution showed up about a decade ago: a new crop of digital-only animators dubbed by their elders as the “web gen” or “web generation” in reference to their penchant for posting their creations on forums and social media. One of the stars of the web gen movement was Shingo Yamashita, whose loose and springy action animation nabbed him jobs on major projects like Naruto and Birdy the Mighty: Decode.

A few weeks ago Yamashita stopped by the US for Crunchyroll Expo 2018 in San Jose California, where I had the pleasure of chatting with him about his unique career in animation and his views on the industry’s sometimes uncertain future in a round-robin interview. Yamashita is uncommonly warm and talkative compared to most Japanese animators I’ve met — multiple times during the interview he broke out into laughter or pulled out his phone to show the interviewers a YouTube video.

The following transcript has been edited for length and clarity, and contains questions from Ani-Gamers as well as other outlets, whose names I didn’t catch during the interview (they are marked with “Interviewer” in the transcript). A big thank you to Crunchyroll Expo’s press and guest staff, as well as interpreter Yoshihiro Watanabe and of course, Mr. Yamashita himself, for the opportunity. Enjoy!

Interviewer: What anime has been your greatest inspiration and made you want to perform better in the industry?

Shingo Yamashita: For oldest, it would be Sorcerous Stabber Orphen's opening sequence, done by Masahiro Ando. As a visual, that really appealed to me. For newer things, I think it would be Evangelion. Honestly, for Ghibli stuff, I never got inspiration from the visuals, but in terms of the script, I always felt inspired by that. 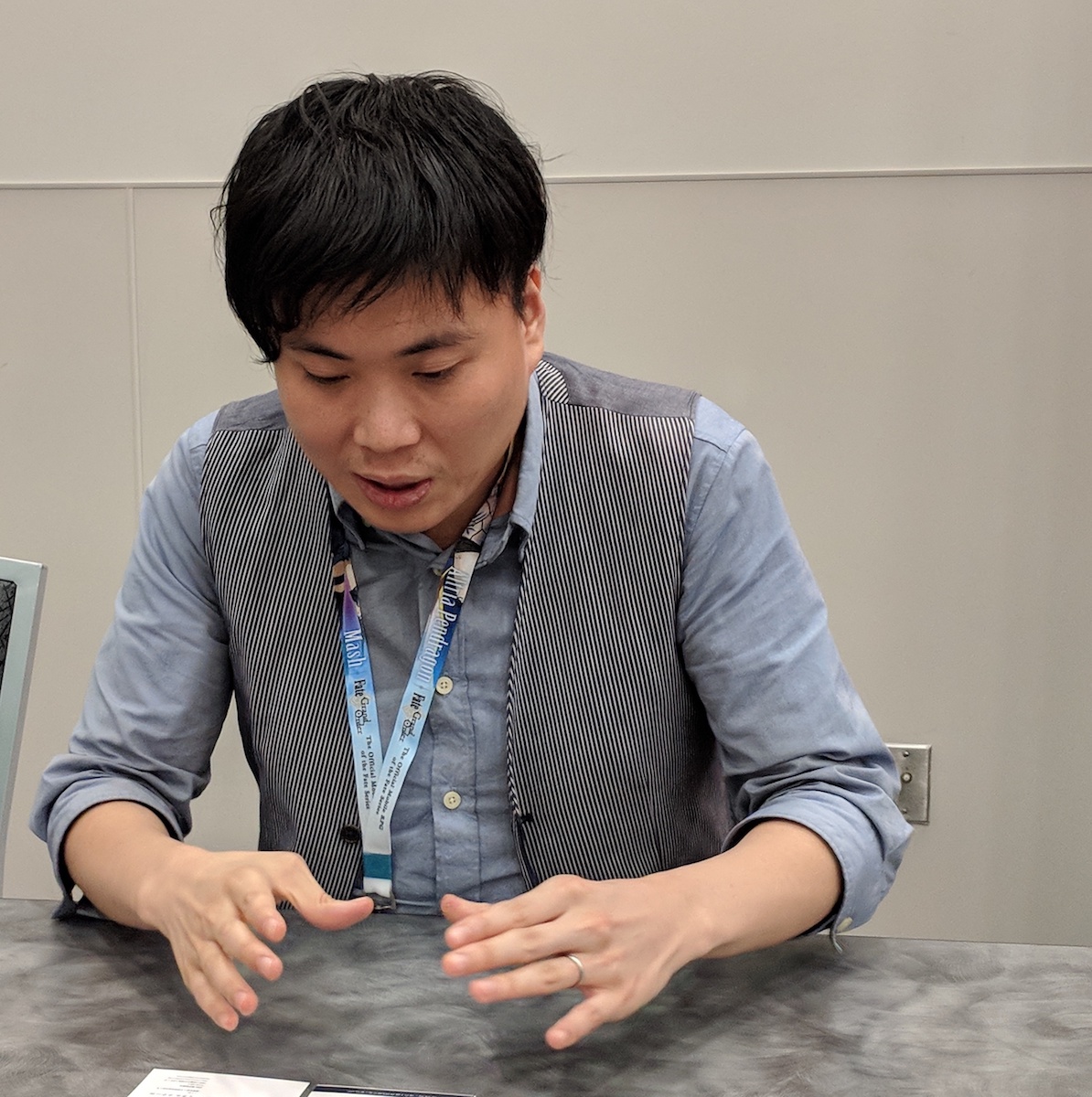 Yamashita: I started with digital first. I did try drawing on paper, but it's kind of bothersome and I don’t like it.

Interviewer: A couple days ago it came out that you had directed the promo for Blade Smash. Could you talk about that and bringing the staff together for it?

Yamashita: It’s a social game from a company called Gumi. They asked me to find a big name for them, so I asked Mitsuo Iso, Kiyotaka Oshiama, Norio Matsumoto, and such, but they all said no. So I ended up working with my usual people, but also I had to find more people, so I went around the popular people on Twitter and asked them to work on it.

I entered this industry because I was inspired by Norio Matsumoto’s work on Naruto Episode 30.

Interviewer: Who are some of your major influences?

Interviewer: What project were you most surprised got a big reaction from the US audience?

Yamashita: Blade Smash! It got four million likes. I was surprised! 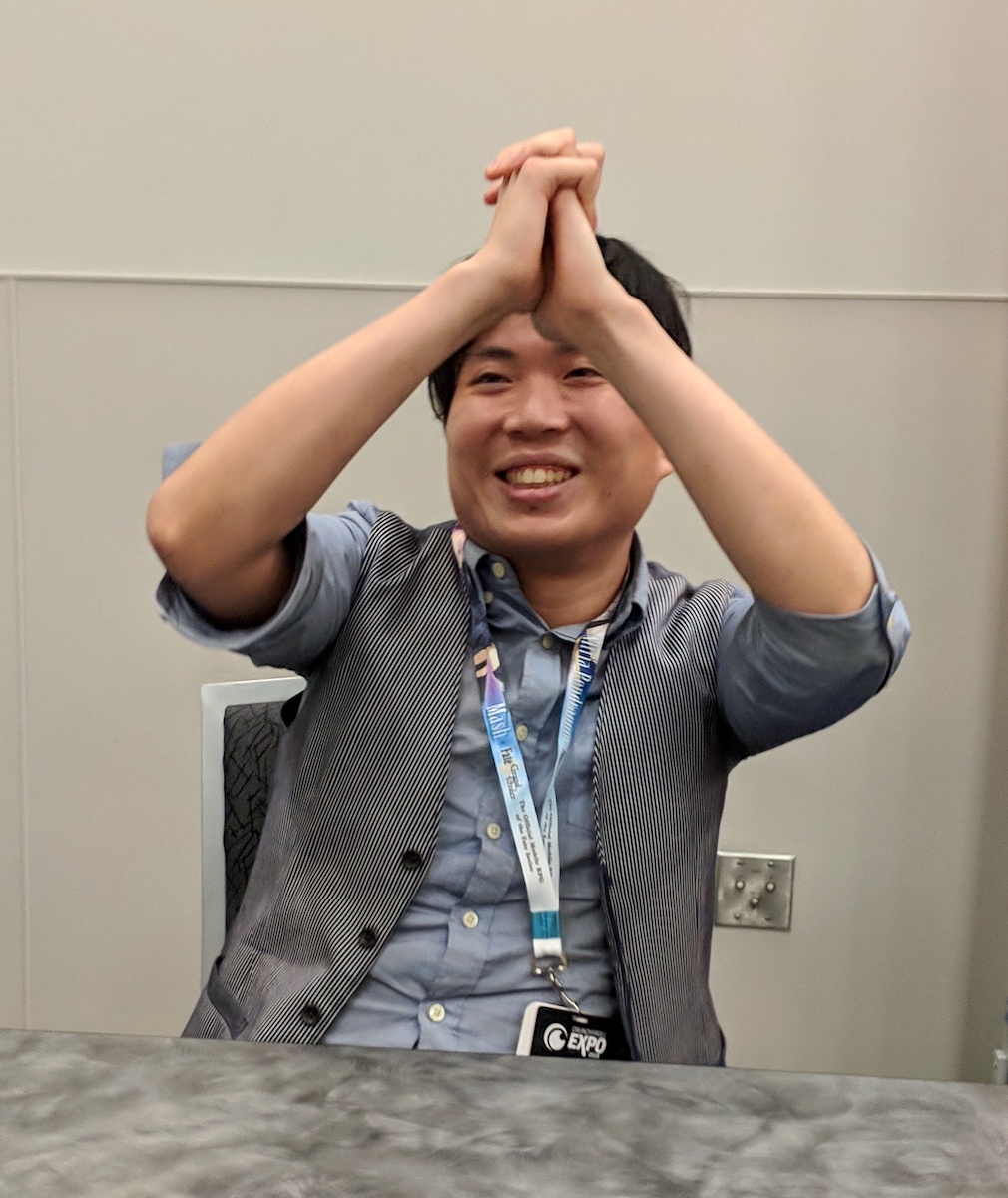 Ani-Gamers: You did a lot of really amazing work on the Pain vs. Naruto fight. I'm curious to hear any interesting stories about the production of that fight. What kind of direction did you get and were there any areas where you took creative liberties?

Yamashita: There are lots of stories, but I'd need to remember them. The episode director Atsushi Wakabayashi came up to me one day and asked me “are you still interested in working on Naruto?” Kenichi Kutsuna and I said “yeah we're definitely still interested.” We were telling him that we’d love to work on a scene that's sort of a gag scene but also serious, where it's hard to tell which it is. And that's how that scene came out.

Wakabayashi was saying “I love this movie scene where this old lady is insane and praying.” (Yamashita mimes her hand motion) After hearing that, Matsumoto created that scene.

(laughs) Should I tell these funny stories or more serious ones?

Ani-Gamers: I like them! But serious ones are good too.

Yamashita: That was actually a big experience for me in the sense that I used way too many frames and I impacted the editing process. I learned a lot, and since then because of that experience I've wanted to go into more compositing and directing because I wanted to see how the other parts of the process are done.

Interviewer: What is the most interesting story you have as an animator, serious or non-serious?

Yamashita: It’s more of a touching story, but basically I entered this industry because I was inspired by Norio Matsumoto’s work on Naruto Episode 30. My work on with Pain was with Norio Matsumoto. But one of the shocking things he told me back then was that “stones don't crack like that.” That was Episode 387. That really lingered with me a lot. After that I did an opening for Naruto Shippuden, the 13th opening. For that opening I worked with my usual team but also wanted to use a lot of younger creators such as Tatsuro Kawano. A while after that, I got a Skype call from Matsumoto and he told me “it’s so fucking cool.” It's the first time I got that big of a compliment from him so I was really happy.

When I met Matsumoto for the first time he told me “you’re not really the director type.” And that really lingered with me. For this opening I was the opening director. So I was really happy that I got that compliment.

Interviewer: Of all the characters you worked on, do you have a favorite that you most enjoy drawing and animating?

Yamashita: I'm usually grasping the project as a whole so I don't really involve myself with individual characters. In terms of taking liberty with the animation, I like Yozakura Quartet’s Kotoha because she can pretty much put out anything that she wants to. Also Fullmetal Alchemist’s Ed, he can pretty much do whatever he wants to. (Yamashita makes the transmutation circle gesture with his hands)

Interviewer: What advice would you give to people interested in getting into animation?

Yamashita: Wanting to become a key animator, a director, or an animation director, that kind of thing is starting to not really matter. It's becoming an age where you might immediately be in that position. What's really important is what can you do once you’re given that opportunity.

I don't attempt things that I can't draw without reference. For example, for animated background scenes I will immediately create guides in 3-D because it takes too long otherwise.

Ani-Gamers: What is your animation process like nowadays? What software do you use and what steps do you go through?

Yamashita: Tools-wise, I've been using Adobe Flash because it really suits me. For my other team who we work with for digital animation, it depends on the person, but they use TV Paint and Clip Studio. Honestly Clip Studio is very weak in creating movements.

One of the things that I do process-wise is that I don't attempt things that I can't draw without reference. For example, for animated background scenes I will immediately create guides in 3-D because it takes too long otherwise. For things that I feel like I can't do at all, I just go ahead and ask someone else who can do them better than me.

Ani-Gamers: When you say making guides in 3-D, is that in a 3-D modeling program, physical models, or something else?

Yamashita: I use a program called Cinema 4D. I've been using it for a while.

Interviewer: If you could only watch an anime that you had nothing to do with forever on a desert island, which anime would that be?

Yamashita: (laughs) I might say Castle in the Sky, but maybe not. If my mental state breaks down I might want to watch something else. It might not be anime at all. It might be a game.

Yamashita: Undertale. I love that game.

Ani-Gamers: Did you do a genocide or pacifist run?

Yamashita: I murdered them first. In the second loop I didn't kill anyone.

Interviewer: Animation is definitely a labor of love. When do you first remember feeling that emotional connection to art?

Interviewer: What particular element do you think the anime industry is in the greatest need of in its current state?

Yamashita: (laughs) I think everyone is tired right now. They’re working so much that they don't really know for sure that what they’re working on is truly entertaining. I think they should just take a break and rethink about what really touches them. And in order to do that, we need money. (laughs)

Ani-Gamers: You’ve been involved in the Animator Dormitories project. How do you see that impacting the broader anime industry?

Yamashita: Personally Animator Dormitories is a great influence on me because, for the Naruto opening or Blade Smash, a lot of people from Animator Dormitories are involved in them. I asked them to work on it. But for the industry as a whole, it probably has much less influence, but it’s a very meaningful influence.

The program gives financial support for animators’ living cost. If that were available when I was starting out, I would have likely applied for such things. For those individuals, it’s a great influence on them. But for the wider industry, because that’s being done it's not really changing anything. That program is not influencing the industry to create a solution for the underlying problem. But I know that the Animator Dormitories is developing other projects right now to find other plans for the industry. So I’m looking forward to that too.

Interviewer: Studio Trigger recently opened a Patreon account to accept donations and connect with their community. Do you see this as the start of something that could resolve the issues that you brought up? Or is it an anomaly?

I feel more positive about those kinds of attempts. Japan as a culture has a little bit of opposition to receiving money from someone. Of course that attempt may get criticisms from people, but I think in the long term it might become something. But right now I think it might be better to have people become patrons of individual creators instead.

Interviewer: You've worked with a lot of studios in your career like A-1 and Pierrot. Are there any other studios you'd like to work with?

Yamashita: Hm... Disney. (laughs) Pixar. But maybe not quite. I want to do something big. In actuality, Khara is a possibility, so maybe I’ll work on Evangelion.

Interviewer: Do you have a lot of appreciation for animation outside of Japan?

Yamashita: Castlevania, for one. There's also a Chinese animation I like, Fēi Rén Xué Yuán or “Non-Human School.”

Interviewer: How has the anime industry reacted to new studios in China coming up with their own animation?

Yamashita: I think Japan is losing. The animation from China is amazing.

Check out the rest of our coverage of Crunchyroll Expo 2018.