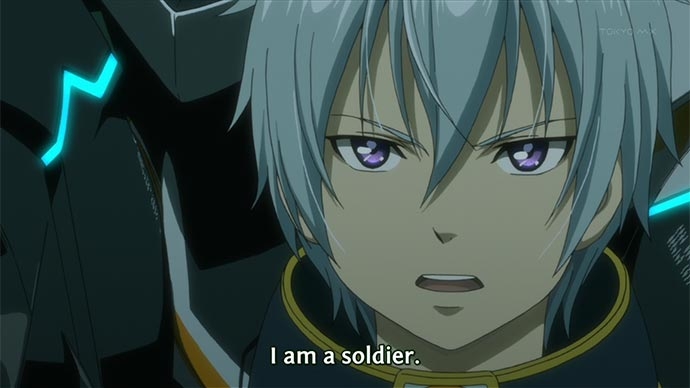 EDITOR'S NOTE — One of our readers, Jared Nelson, wanted to bring his unique perspective on Gargantia to the blog, so we're extremely pleased to present this feature article, and we thank him for volunteering his time to write it up. If you're interested in contributing to Ani-Gamers, please don't hesitate to get in contact with us.

We meet him as a weapon forged through years of battle. This weapon, a young man named Ledo, can recall the concept of fear even though he can no longer remember the experience. Excess emotions have been smoothed away by the winds of war. He streaks through the vacuum of space, an arrow of the Galactic Alliance, aimed at the heart its enemies. Little does Ledo know that his life as a weapon has come to an end. Everything in Ledo’s life has led to this moment, but nothing in his life has prepared him for what comes next — not unlike most young Japanese entering adulthood today.

The 2013 sci-fi anime Gargantia on the Verderous Planet tells the story of Ledo’s journey from weapon to human being, and the hopeful message therein comes from the perhaps unlikely mind of Gen Urobuchi (best known for darker works such as Puella Magi Madoka Magica). In developing the plot for Gargantia, Urobuchi wanted to “make a story for those who feel perplexed because of job hunting itself or because they have just entered their position as a first-year working adult.” When a project calls for tackling the existential terror of finding one’s own way through the world, perhaps Urobuchi isn’t as unlikely a choice as he might seem. In fact, in Ledo, Urobuchi has given voice to the struggles of modern Japanese youth.

Just like Ledo arriving on Earth, these young people have found themselves in a world marked by uncertainty.

Like many countries, Japan currently suffers from a stubbornly high youth unemployment rate. In Japan’s case, the unemployment rate among young people has hovered over 7% since the mid-1990s and reached an all-time high of 10.8% in June 2010. (These and other details as well as comparative country data can be found here.)  An entire generation of children have been born and grown up during Japan’s post-bubble economic malaise. Just like Ledo arriving on Earth, these young people have found themselves in a world marked by uncertainty. And in Ledo, Urobuchi explores the challenges and questions Japanese youth face today.

By the time young Japanese students enter junior high school, the equivalent of grades 7-9 in the USA, societal expectations begin to exert an increasingly strong influence on their lives. The exam-based entrance system of Japanese schools drives most of the pressure Japanese students feel to perform. The ability of a newly minted member of the Japanese workforce to find a good job depends on the prestige and perceived rigor of the university from which he or she came.  Likewise, getting into a good university depends on coming from a good high school, junior high school, and in some cases even elementary school.  As a result, there is tremendous pressure on students to make the best grades possible as early as possible. Many students in Japan attend supplementary schools called "juku," otherwise known as cram schools, in order to get ahead in their studies or to prep for an entrance exam for the school they’d like to attend.  Students attend juku on school nights/weekends for the entire purpose of making sure they get into the best high school or university they can.

Where does Ledo come in?  Ledo spent 145,000 hours, or roughly 16 years (don’t ask me how), serving the Galactic Alliance as a solider.  For each of those hours, Ledo focused exclusively on his mission: fighting the alien race called the "hideazue." The fate of the human race depended, in part, on his ability to kill as many hideazue as possible. Ledo’s pre-Gargantia life parallels the rigorous life of Japanese students prior to entering the workforce. In both environments, discipline, order, and conformity form the essential building blocks of success. Ideally, both the Galactic Alliance and the Japanese educational system produce highly trained and disciplined young people that can immediately benefit society at large. However, the system of lifetime employment that employees assumed as a given in pre-bubble Japan has fallen, like Ledo, down a wormhole. And like Ledo arriving on Earth, the economy that today’s Japanese college graduates find themselves in bears little resemblance to that of their parents. 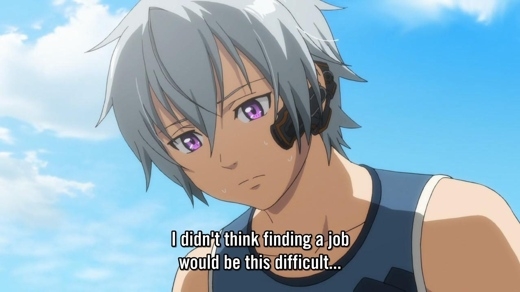 When the vast majority of life is spent in a structured, well-ordered environment, the transition to a lesser-ordered, less-certain environment can be culture shock.

In the series, Ledo’s arrival on Earth marks the end of his old life as a solider and the beginning of his new life as … something. What can he do in a world where soldiers don’t exist? When the vast majority of life is spent in a structured, well-ordered environment, the transition to a lesser-ordered, less-certain environment can be culture shock. Ledo’s repeated attempts and failures to find a job he’s well-suited for echo the real life struggles many young people experience today with finding a job in the post-bubble, post-Great Recession economy.

Once a Japanese graduate exits the education system and begins the job hunt, they find themselves in a job market where their skills don’t necessarily translate to the specific needs of the job market.  In a system where conformity and teamwork are prized, it can be difficult for a candidate to express why they should be chosen for a job. Either they risk appearing too bold (most Japanese companies frown on anything that can be seen as excess confidence) or not explaining or demonstrating their strengths well enough. With such a difficult balance to strike, it’s no wonder many young Japanese become discouraged and frustrated with the process.

While several moments in the series call attention to the allegorical qualities of Ledo’s job hunt, Urobuchi provides another more subtle but equally important theme.  The war between the Galactic Alliance and hideazue of space and the peaceful coexistence between the people of Gargantia and the hideazue of Earth represent two emerging narratives in modern Japanese society. One path, the “space path,” suggests a worldview that recalls Japan’s more militaristic past — using hard (military) power to defend the country’s interests if necessary and taking a more aggressive stance against potential rivals in East Asia. The alternative, the “earth path,” hews closer to the political stance Japan has employed since the end of the Second World War by leveraging soft (socio-economic) power to advance Japan’s interests as well as taking a collaborative and multi-lateral diplomatic approach toward neighboring countries in the region.

Ledo’s internal conflict between his upbringing as a soldier and his experiences aboard Gargantia represents the clash of these divergent worldviews in Japanese society and suggests that Japanese youth, like Ledo, will have to reconcile these viewpoints as they inherit society from their parents.  The clash of the aforementioned space and earth paths comes to a climax in Episode 9, when Ledo's AI companion Chamber kills a hideazue child it perceives as a threat. Chamber does this despite Ledo’s desire to not harm her after learning that a group of humans evolved into what became the hideazue. With the enemy now humanized (literally), Ledo screams in anguish at her death. Another example of the clash of these worldviews comes near the end of the series, when Ledo and Chamber disobey direct orders from Striker to destroy the Gargantia fleet. 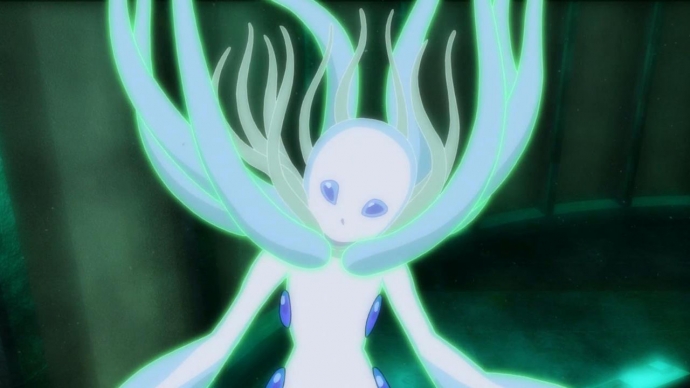 In both the cases of finding employment and Japan’s place in the world, Urobuchi seems to suggest a third way. In the case of employment, perseverance and flexibility help Ledo to find a job as a salvager. In the case of war versus peace, the message seems a bit more nuanced.  Early in the series, outright pacifism seems to be debunked as a go-forward strategy as represented by Gargantia’s battles with pirate captain Lukkage. However, most of the characters in the show strongly reject the mass murder and destruction of both the pirate forces and later the hideazue of Earth by Ledo. 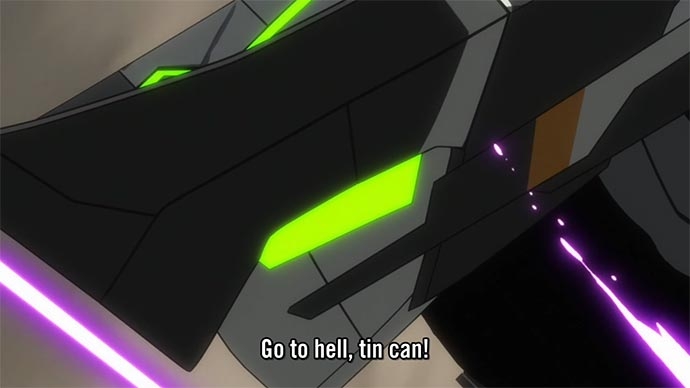 As a 2013 anime series, Gargantia on the Verderous Planet may not be remembered as a blockbuster like Attack on Titan or a groundbreaking work like Flowers of Evil. Some episodes (episode 4) I found especially powerful. Others (episode 5 … ugh) might be best forgotten. But despite its flaws, I found myself choosing Gargantia as my favorite show of the year, because it tried to address some of the larger real-life questions the newly minted adults of Japan face today. I had the honor of teaching some of those young adults a decade earlier. If any of my former students manage to see Gargantia, I hope its message of perseverance and hope provide some small comfort as they navigate their way through an uncertain world. 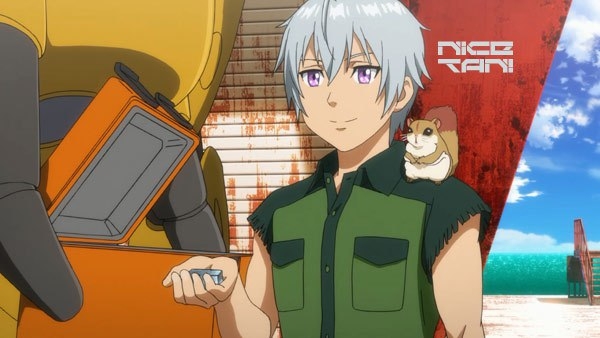