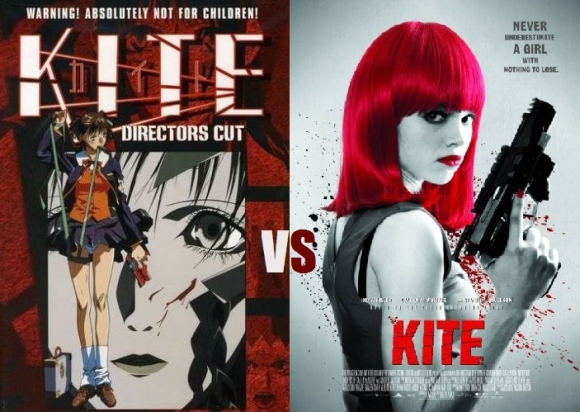 Spoiler Warning: The following feature compares and contrasts various aspects of the 1998 anime and the 2014 live action film. Spoilers regarding both will be abundant.

Despite all the anime titles fans actually want to see get live action adaptations, we get KITE. Actually that does make a good deal of sense. Yasuomi Umetsu’s 1998 OVA focuses on a corrupt cop carrying out his hypocritical vigilantism via two youths he “adopts” and trains for use as his own gloved gun hands. Since the story takes place in a pretty normal city spiced up but by relatively simple pyrotechnics and gore, the budget would be much more producer-friendly than something like Cowboy Bebop. Also, the action-packed and bloody nature of KITE seems a no-brainer pitch to excitement-seeking theater-goers. However, since certain story elements in the anime were either production-, marketing-, or audience-unfriendly, the live action film does a few things differently.

An English professor I once had stated, in so many words, that using a direct quote from someone else to initiate or conclude a personal statement is an admission of one’s own failure to make a good argument. As if taking his advice, Ziman’s KITE leads off lightly by revealing one of its main characters and a little bit of the neglected downtown (Johannesburg, South Africa) setting. Only after is the audience treated to a relatively faithful reproduction of the elevator scene familiar to fans of the anime. Everything that follows thereafter is more akin to a parallel word rather than a replication, and there’s a perfectly reasonable explanation as to why.

The anime runs approximately 45 minutes, which many would consider far too short for a theatrical presentation, and it’s not like the additional 15 minutes of explicit sex in the director’s cut add much more substance from which the live action film could draw. In the anime, the story mostly focuses on the tensions between and actions of the main characters: Sawa, Akai, and Oburi. Since the world in which these three live, kill, and die is more or less relegated to the status of a relatable backdrop, Brian Cox set about adding some color and depth to his KITE script by flushing out the city’s story and thereby defining the context of its inhabitants’ lives. Naturally, this leads to some big differences between the anime and the live-action film.

In his script, Cox originally sought to carry over the emotional tension established by the anime (without actually building any) to complement his more characterized world. This is a tough thing to do, however, especially when Cox renames Sawa’s “handler” (Akai becomes Karl Aker), completely changes the nature of Oburi’s relationship with Sawa, and turns Sawa into someone who actively forgets instead of actively remembers. A name change is one thing, but the other two decisions carry massive ramifications.

In the anime, Oburi was unaware of Sawa and vice-versa until they unwittingly carry out a job together. As they discover some semblance of normality by getting to know each other away from the office, an intimacy forms. Oburi turns out to be a recruited assassin, just like Sawa, who also considers Akai his guardian and employer. This shared, unsavory relationship lends massive weight to Sawa revealing something as personal as the meaning of her name (sand you wouldn’t hold, feather in the wind) to Oburi. After becoming closer, they end up helping each other out of binds a couple of times, promoting an air of equality. This stands in stark contrast to the movie, where Oburi, who is now a childhood friend, shadows Sawa on his own in order to come to her aid in moments where she gets in over her head. This relationship is weighted to one side and in Oburi’s favor. Sawa’s no longer capable; she’s someone who needs saving. The kicker? Sawa doesn’t reveal her name to Oburi in the live action movie; she reveals it to the emir (the villain behind the flesh trade) … for no particular reason and no effect whatsoever.

The film uses the erasure of memories for manipulation.

In the live action KITE, Sawa doesn’t remember Oburi’s childhood friendship (or her parents’ deaths), because she’s constantly taking a memory erasing drug supplied by Aker. Thus the film uses the erasure of memories for manipulation. Visually, this is represented by Sawa’s longer hair that constantly obscures the earrings featured so prominently in the anime. Unfortunately, not much is made of the earrings until more than halfway through the movie, so there’s no real emotional attachment or investment stemming from the fact that they’re made from pieces of a chandelier broken on the night of the murder of Sawa’s parents. The anime uses reminders of memory as manipulation. This is accomplished mainly through the earrings, which are filled with the blood of Sawa’s parents (one from mommy and one from daddy) and always feature prominently due to Sawa’s short hair. Aside from visual reminders, the earrings serve as the motivation that makes Sawa cross the line from innocent to assassin. (Akai was threatening to destroy the earrings he made for her if Sawa did not carry out a test execution.)

In part, this is a wonderful way of seeing how Sawa’s revenge plot is consequently linked more tightly to the mechanics of the world rather than the drama between the main characters. Since Sawa initially bears no grudge against Aker, her puppeteered actions strike against the harsh reality of the world in which she lives — namely the flesh trade (gangs abducting youths and selling them to cartels who sell them to The Emir who sells them for shipment to be “enjoyed” elsewhere). And while the selling of flesh is new to KITE, the abduction and abuse thereof is not. The anime sets up Sawa’s relationship with Akai as one of suffering via mental and physical abuse. Sawa’s never forgotten just who took her in and (for whatever reason) bides her time lying in wait for her chance to strike back. The only insight into the world around them is that Sawa’s often sent on missions to kill those who abduct/abuse children. Since this is reflective of her own situation and really only speaks only to actions between characters and not the surrounding world, the anime is pure interpersonal drama.

In the same sense, environment affects how live-action Sawa acts while on missions. Since she has to be told about Aker’s involvement in her parents’ case and thus does not initially carry her anime counterpart’s hurt and rage regarding Akai, Sawa somewhat freely lashes out at the world Aker tells her to blame for her parents’ deaths and looks upon Aker’s apartment as a safe house. In the anime, every assassination job is handed down personally by Akai or his partner, and Sawa never goes beyond carrying out those instructions. There are no clues to find, because there’s no mystery. Sawa carries out only that job (unless complications arise) and usually returns at her leisure but only to get paid; staying longer has certain … consequences. It’s a cold business made even colder by the hovering history and associated abuse. 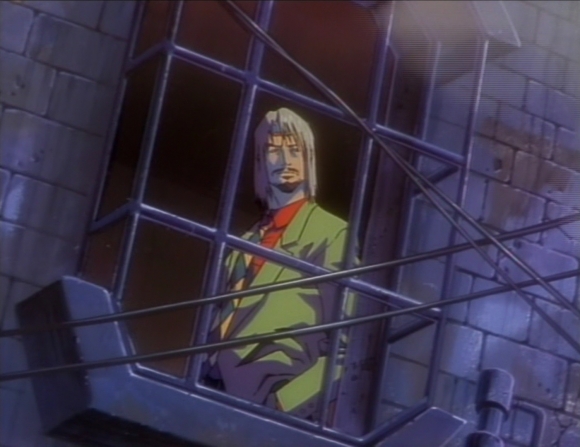 Who the bigger abuser is, between Akai and Aker, is definitely debatable. On the anime side of things, Akai is a child rapist, a cold-blooded murderer, and a corrupt cop. He also lies to Sawa about looking for those responsible for the murder of her parents. Aker is also a corrupt cop; commands (or at least holds sway with) one of the nastiest gangs in the area, flesh-reapers called the Numbers; and gets Sawa addicted to a memory-erasing drug. Then he passive-aggressively makes Sawa feel ashamed for using, while he uses her synthetic amnesia to have her kill off the scum of the city as his vicarious vigilante. True, Akai’s obviously the bigger scumbag, but the subtlety of the portrayal of Aker’s perverted sense of justice and manipulation of Sawa is a close second.

Live-action Sawa leaves witnesses all over the place. Animated Sawa, on the other hand, hardly ever leaves a witness standing.

Regarding the other characters, there are some fun differences. Take anime Oburi: he uses explosives during missions to create distractions so he can take out his target without being noticed. Live action Oburi also uses explosives to create distractions. But since this Oburi is not an assassin, he mainly uses said distractions to help Sawa out of jams or sneak in/out of dangerous places. Speaking of, Sawa is not quite her animated self in the live action film. I mean India Eisley (live-action Sawa) looks a lot like anime, but her voice actor sure needs some coaching concerning the delivery of those witty just-before-I-shoot-you lines. There’s also the issue of her survivor ratio. Live-action Sawa leaves witnesses all over the place. This leads to suspicions about Aker, who punishes Sawa with a little lecture and guilt. Animated Sawa, on the other hand, hardly ever leaves a witness standing. If she does, there are beatings and worse in store.

As for the actual visuals in both, I’ve no complaints. The use of the lines (bars, building edges, taut wires, signs) in shots as well as the play between light and shadow are only enhanced in the live action film. And as for music, while there isn’t as much of it in the anime, the live action spices action scenes up a bit with what I’m probably wrong in calling fuzzy techno/rock. Paying homage to the anime, at least the live action film still manages to work in the inappropriately smooth sounds of some soft alto and soprano sax.

So those were all the differences and similarities, but how did they work as a film? To find that out, read Ink's full review of KITE (2014) on The Fandom Post.