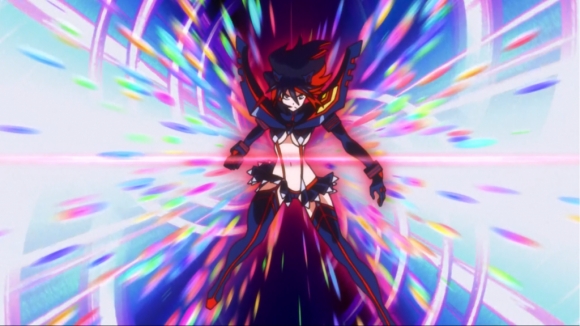 When Kill la Kill started last Fall, I almost wrote it off as another in a long line of male gaze centered, “boobsword” shows so sadly common in anime.  Now that it’s over, I’ve found myself thinking about it quite a bit. In keeping with its frenzied pacing and art style, it’s not an easy show to pin down thematically. But after taking in its full measure, I’ve begun to see KLK as perhaps one of the most feminist anime I’ve seen in years, though I’m not sure it set out to be. When you consider the fact that women in Japan can often find their way obstructed by deeply entrenched gender discrimination, a show like Kill la Kill becomes all the more interesting for what it portrays: smart, capable women struggling to make their own way opposed by a society that wants them to grow up into “good wives and wise mothers”.

Among female characters in anime, there’s an archetype you’re almost bound to find: The Yamato Nadeshiko. A demure and graceful demeanor, facility for housework, and loyalty to one’s husband comprise the primary traits of this idealized conception of Japanese femininity.  In the context of action-oriented anime, the Nadeshiko tends to play one of two roles: damsel to be rescued or seemingly competent heroine that becomes a damsel to be rescued. The Nadeshiko might be sweet, endearing and likable, but more often than not she doesn’t control her own destiny. In other words, the Nadeshiko lacks agency.

Ryuko and Satsuki don’t reject femininity per se. They just want to engage with it on their own terms

Ryuko and Satsuki reject the virtues of the Nadeshiko in their own ways.  Ryuko rebels outright against Nadeshiko virtues by adopting male mannerisms and modes of speech, and generally having little regard for formality. Satsuki takes on the mantle of a warrior queen, elevating herself above the need for qualities that could be perceived as weak.  While both women spend much of the show rebelling against a system of expectations symbolized by Ragyo and her fashion slaves, it’s worth mentioning that Ryuko and Satsuki don’t reject femininity per se. They just want to engage with it on their own terms, a point which the show’s final scenes show prominently. 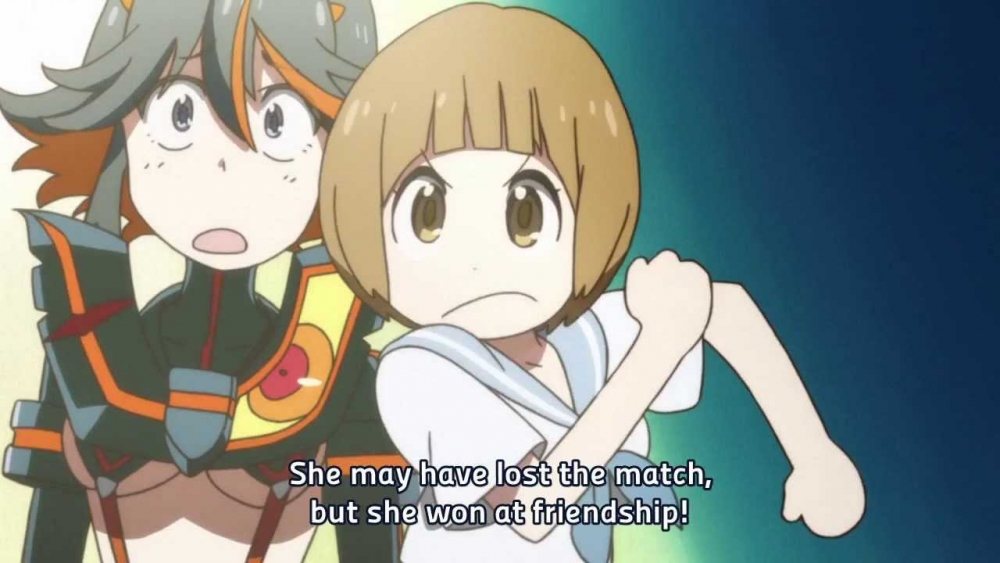 Even Mako Mankanshoku, Ryuko’s sidekick and frequent moral compass, has a high degree of agency when moved to action.  She comes to Ryuko’s aid on several occasions with no regard for the danger or consequences. In these moments, Mako gains a kind of zany heroism that highlights her ability to affect change despite her everyman demeanor. 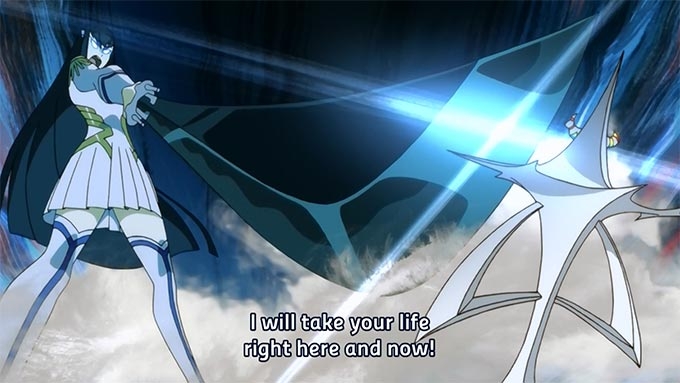 Ryuko and Satsuki don’t wait for anyone to solve their problems. Indeed, when other members of the supporting cast, particularly the men of Nudist Beach attempt to do so, the show goes out of its way to point out their ineffectiveness. In this way, Kill la Kill handles its men the same way shonen fighting shows often handle female characters. The show also borrows a visual presentation of conflict typically reserved for manly men shows: blood, steel, and vengeance. Notably, the show doesn’t try to beat anyone over the head with this idea — it simply does it like its perfectly normal. There’s no scene where two guys sit back and say, “Golly gee, those gals sure can fight”. The fact that the leading women of Kill la Kill walk, talk, and fight in a way usually reserved for male focused shonen fighting shows makes it a rare, if not singular title among contemporary anime.

The super school uniforms, Kamui Senketsu and Junketsu, remain one of the most outrageous aspects of Kill la Kill. Based purely on appearances, these outfits seem designed to titillate and cater to the male gaze. Instead, the Kamui quickly become one of the show’s more clever methods of trope subversion. The snapping, twisting, and pulling noises of the Kamui seem to suggest Ryuko and Satsuki’s discomfort while wearing them in their powered up state.  Ryuko reacts initially with embarrassment at the idea of wearing Senketsu into battle.  Satsuki, on the other hand, rejects embarrassment simply as a price to pay in exchange for the strength to meet her goals. The Kamui’s Life Fiber Synchronize/Override transformation sequences feature Ryuko and Satsuki enduring hurricane force winds while being squeezed and snapped into their costumes, breasts moving at a speed so fast it crosses over from titillation to outright satire. Neither woman spares any time for hyper-sexualized poses or coquettish winks at the viewer. They complete their transformations ready to do battle, standing in postures that suggest strength and confidence, not posing as if for a gravure calendar. 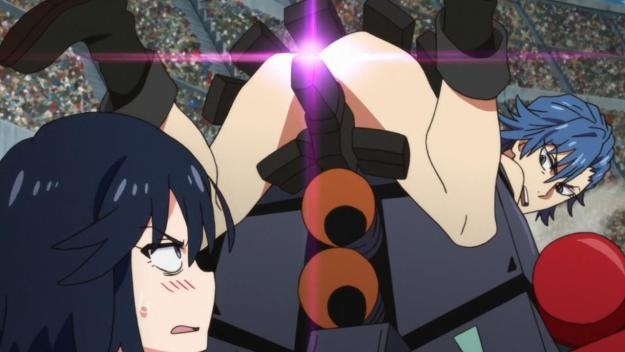 Kill la Kill might feature a great deal of ridiculous outfits and nude scenes, but it spreads the awkwardness between both genders. The men of Kill la Kill, particularly leading members of the resistance group Nudist Beach, often find themselves the subject of lingering camera shots and awkward poses. Aikuro Mikisugi, Nudist Beach’s leader, Ryuko’s amorous homeroom teacher and sparkley male stripper, cleverly inverts the traditional “sexy sensei” trope often used for female teachers in anime. And then there’s the DTR—possibly the most poorly designed and embarrassing fighting vehicle ever conceived. Its pilots “sit” torpedo-like in the DTR’s cockpit, lower halves of their naked bodies completely exposed.

It’s important to look at artist intent when evaluating a show like this.  It’s clear that the creative team chose to invert many of the tropes common to male focused fighting anime and female characterization when making Kill la Kill. However, Kill la Kill’s director and writer are both men, and I’ve haven’t seen any interviews or comments that suggest they intended to create a feminist work with this show. Indeed, the duo’s Gurren Lagann featured prominent male-centered fanservice in the form of Yoko Littner. Despite their past work, Kill la Kill’s story of free expression versus conformity and rebelling against tradition seems to suggest an awareness of the struggles women face in the world today.  Intent aside, I believe the impact a work has on its audience tends to evolve organically as people watch, talk, or think about it. In Kill la Kill’s case, even if its feminism is accidental, it’s a welcome break from the parade of shows where women are portrayed as incapable of defending themselves, or hyper-sexualized warrior pinups, or part of a horde of female characters almost wholly defined by their affection for a single man. 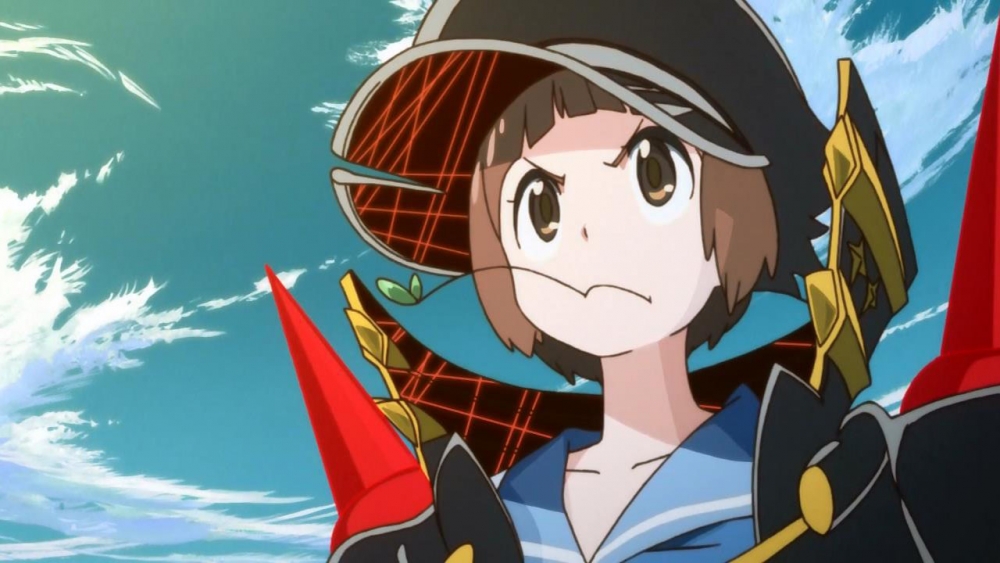 Kill la Kill exists in an industry largely aimed around pleasing young males, and in a cultural context where women do not have the same socio-economic advantages as men. It turns the standard male power fantasy formula on it head while maintaining a veneer of fan service. It might not be as stridently progressive of a show as we would like, but its likely such a show wouldn’t see the light of day on Japanese television. Like its principle heroines, Kill la Kill struggles against a set of industry and societal expectations while delivering a surprisingly feminist message: that you can find your own way in the world, societal expectations be damned. That Trigger made Kill la Kill their first full show may be a sign they’re willing to take risks to make bold statements, or it might mean nothing at all.

Then again, not making sense is kind of their thing. 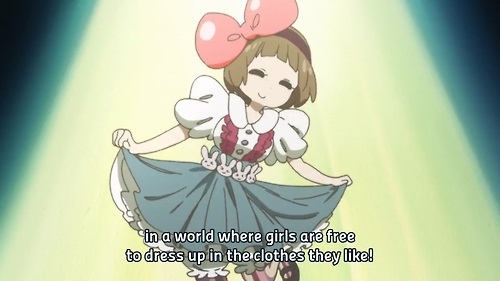