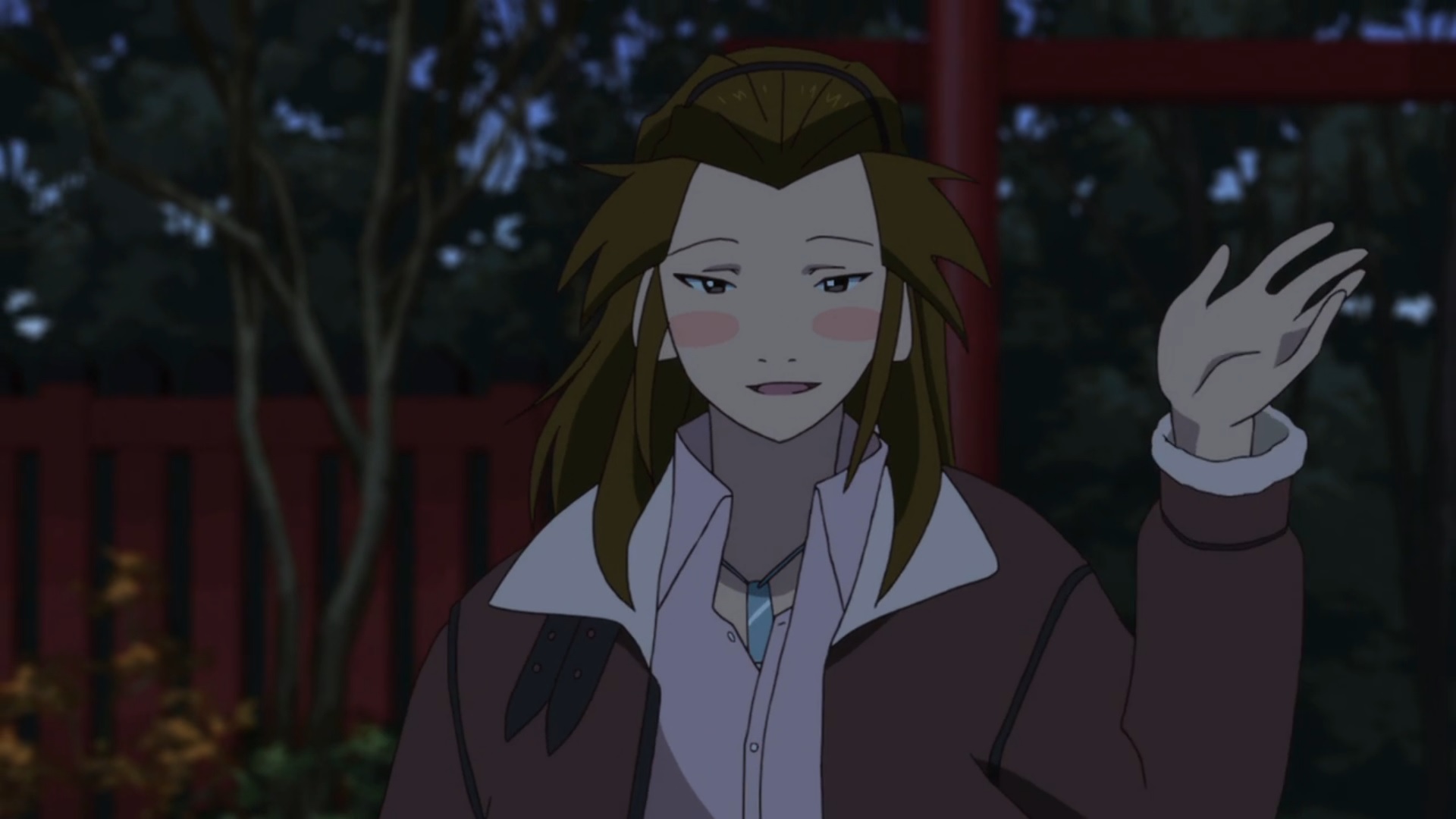 Name: Yajirou Shimogamo
Series: The Eccentric Family
Episodes: Each with a well, some without
Usual: Sake (Electric Brandy on occasion)
Favorite Dive: The bottom of a well
Type of Drunk: The Pity Party, The Philosopher, The Idiot Savant
Quote: “I'm a frog in a well."

Renowned throughout Kyoto as the tanuki with the least motivation, Yajirou is the second eldest of four tanuki born to the Nise-emon (tanuki leader), Souichirou. While the boasted-about idiot blood of such a revered tanuki flows through all of his children, each embodies one specific aspect of Souichirou’s personality. Yajirou inherits his father’s easygoing nature. By Yajirou’s own admission, in fact, the only time he actually displays the will to do anything is while drinking. At least that’s the way things were before Yajirou transformed himself into a frog and became “a forgotten, no-good tanuki half dropped-out of society.” But it’s not like he did so for no good reason at all. 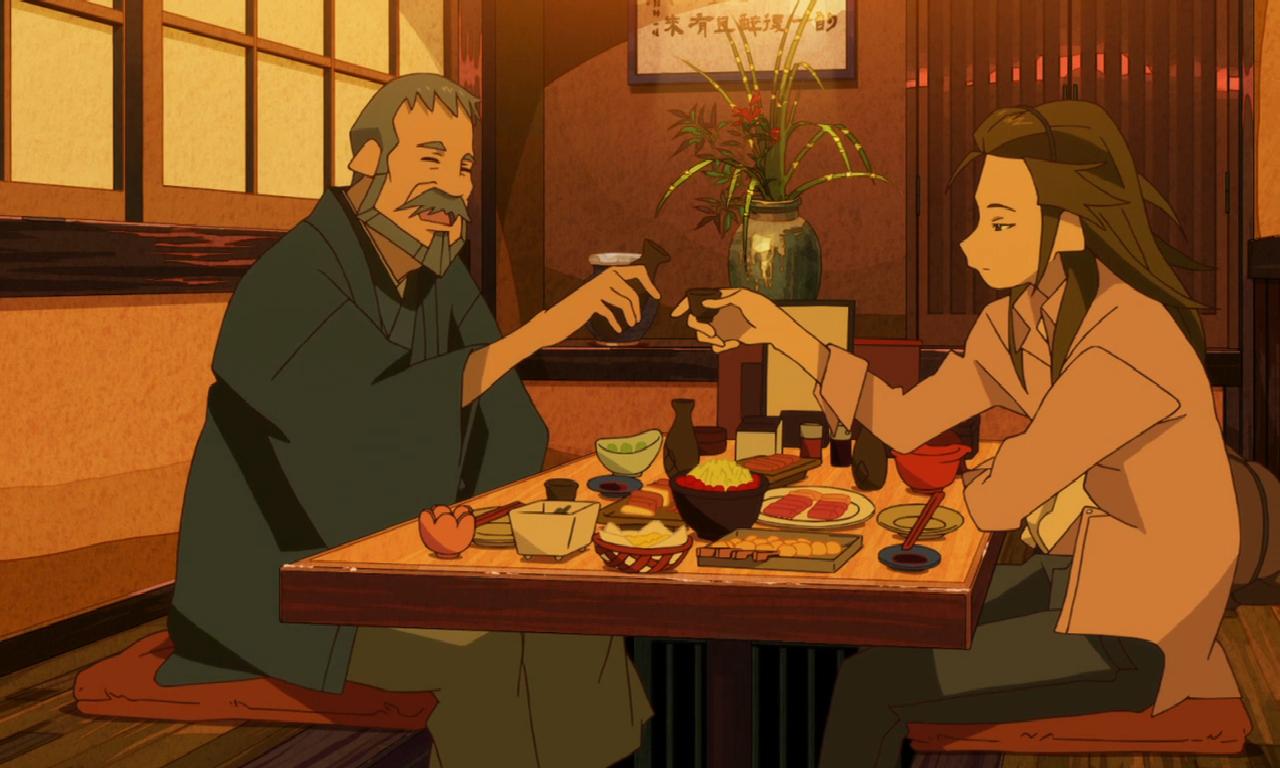 To start, Yajirou’s a bit of a Romantic, and those thus branded have certain obligations as idiots — appreciators of all that surrounds them and inseparable friends of whim. One such obligation, the star-crossed adoration of his younger brother’s (Yasaburou) arranged fiancé, makes Yajirou want to flee the family before he can betray their love. Only Souichirou’s fatherly counsel and offer of assistance manage to quell Yajirou’s inner disquiet … well that, a ton of sake, and some drunken revelry in the late-night Kyoto streets courtesy of the False Eizan Electric Railway. And while the thumping of the hangover the next morning does immediately mask the pain of dwelling on an unrequited love, nothing covers the insufferable silence that follows. 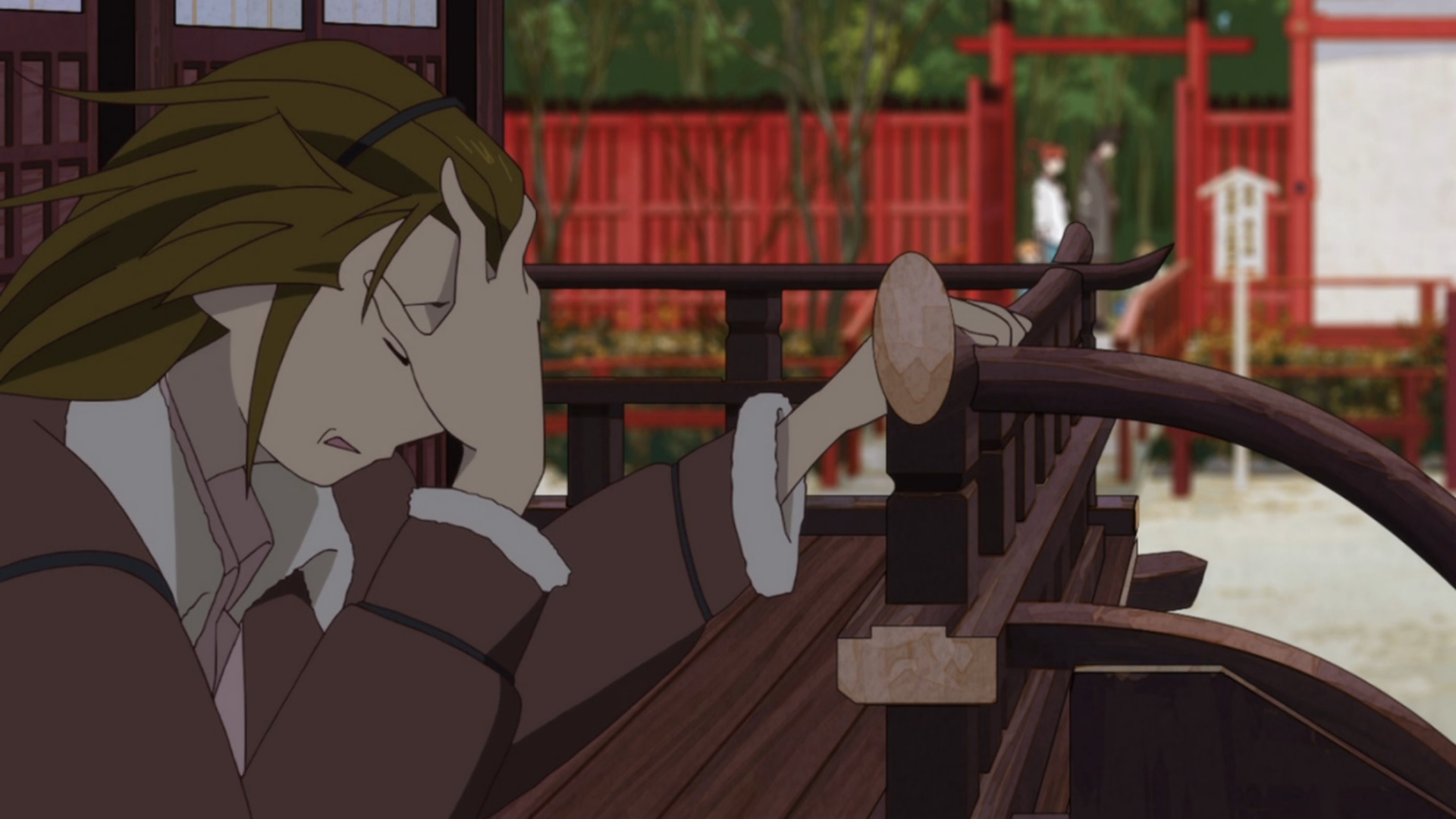 Though his family awaits his familiar footsteps, Souichirou never returns, and Yajirou casts all the blame upon himself. After all, he, as a railcar, irresponsibly let off his sole passenger to wander Kyoto while obliterated. When news comes that Souichirou became the featured ingredient for the annual Friday Fellows hot pot celebration, Yajirou feels he mustn’t burden his grieving family further by lumping upon them his own saturated guilt. So he transforms into a frog and takes up residence in a well at a nearby shrine instead. Years pass, and this sobering solitary residence spurs as much philosophical growth as it does melancholic meditation.

Poets and philosophers have a long tradition of looking up at the stars to stir their thoughts and an even longer tradition of drinking to do the same. 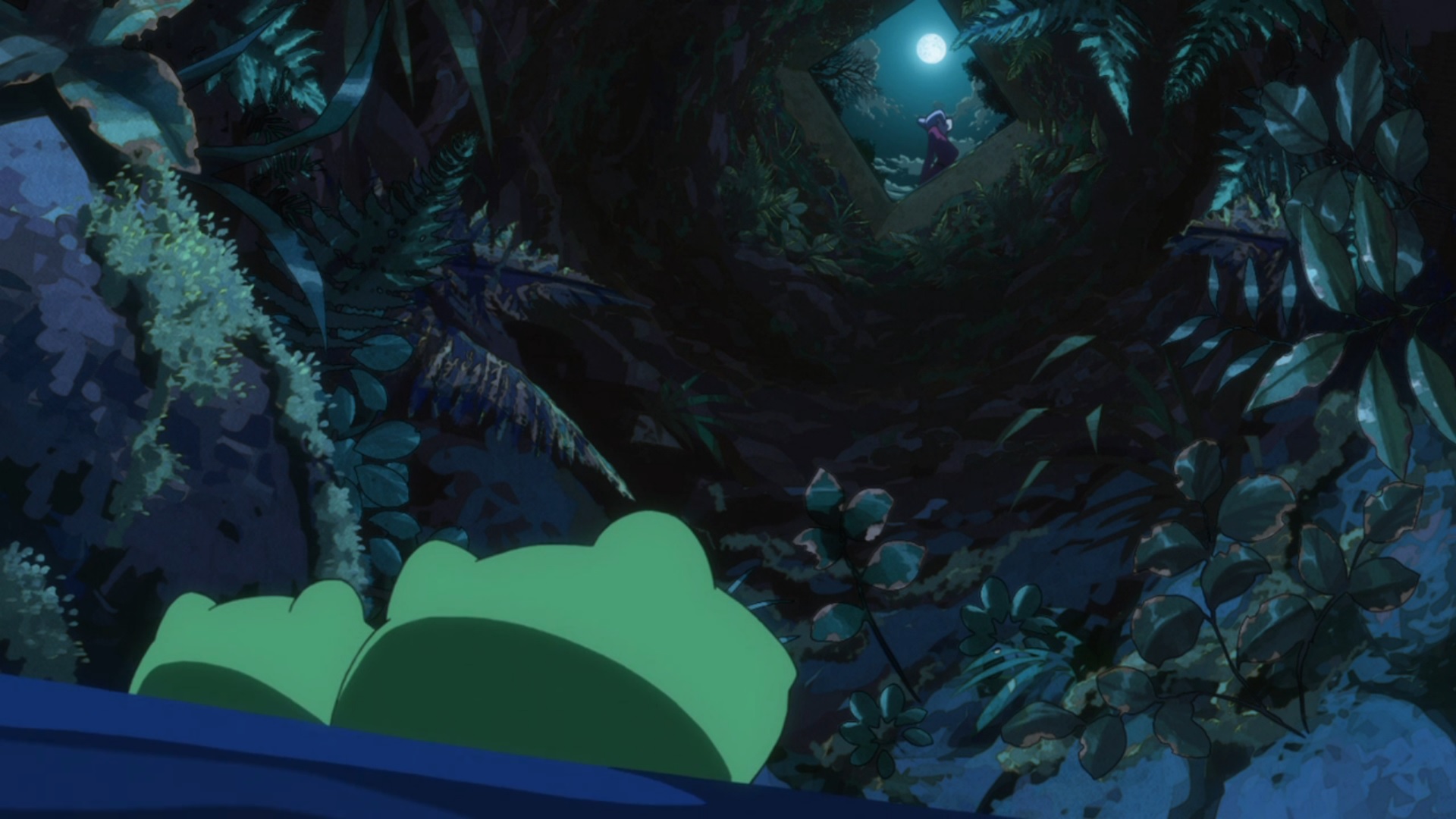 The view from the bottom of a well might not be much, but you can see the sky and the stars really well. My world is small, but since I’m looking up at space night after night, you could say I’m a frog on a universal scale. When you gaze at space like that all alone, the back of your mind goes quiet and you feel as though you’ve gained and extraordinary amount of wisdom.

Yajirou opens himself to well wishers — those who come and talk about their troubles to what they think is an empty well — to converse about the universal and wax poetic about the problematic. Sympathy and empathy are bridges of imagination by which he can escape his own troubles for a time. Of course, those times never seem long enough.

Because Souichirou was never able to act on Yajirou’s behalf in the matter of his romantic entanglement, that situation was never resolved. In fact, its weight only presses further down on the poor frog’s back; Yajirou has been transformed so long that he’s forgotten how to return to his tanuki form (or any other form for that matter) and is now stuck in a literal well visited (separately) by both Yasaburou and his fiancé. And of course Yajirou still marks with precision the anniversary of his father’s death despite being holed up in a well as a frog with only astral rotation for aid. Why wouldn’t he obsessively think on Souichirou’s death? Due to the ensuing blackout from that night, Yajirou can’t even recall the last words his father spoke, and the desperation to remember is crushing. These compounded sadnesses, along with the emptiness of not being part of the blood of the everyday family, make Yajirou end almost any encounter with nearly everyone who visits with some variation of, “I’m only a frog in a well.” By doing all these things, he avoids associating any trace of “humanity” with himself and exists as a mind more than a "man.” That is until he hits the sauce again. 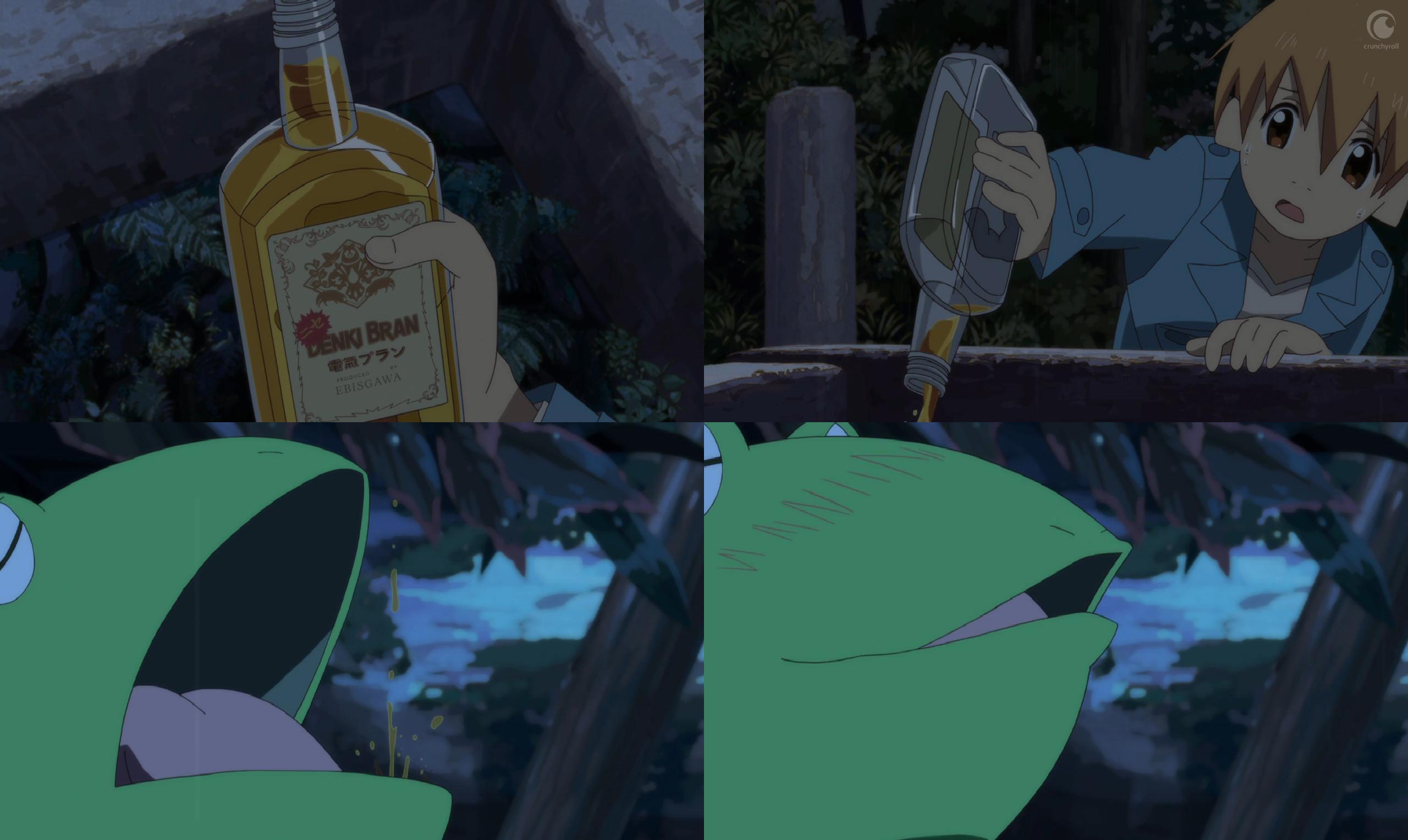 Forget about merely falling off the wagon; Yajirou turns into the wagon and goes off the tracks! After the youngest Shimogamo sibling pours some Electric Brandy into Yajirou’s gaping maw and one mighty gulp, his superpower — the ability to do something other than nothing — activates, and he transforms into a rogue railcar rampaging through Kyoto once again as powered by his idiot blood. But this great drinker isn’t only back to his old tricks. After ramping up speed on a fake street that serves as a ramp, railcar Yajiro manages to float (literally) with the help of some port wine and rocket, with a little help from a borrowed tengu fan, straight … into a building. Remember, kids, don’t drink and transform/drive/fly.) While I don’t recommend mixing alcohols if you’re human, if you happen to be a tanuki transformed into a magical train, I say go for it! After all... 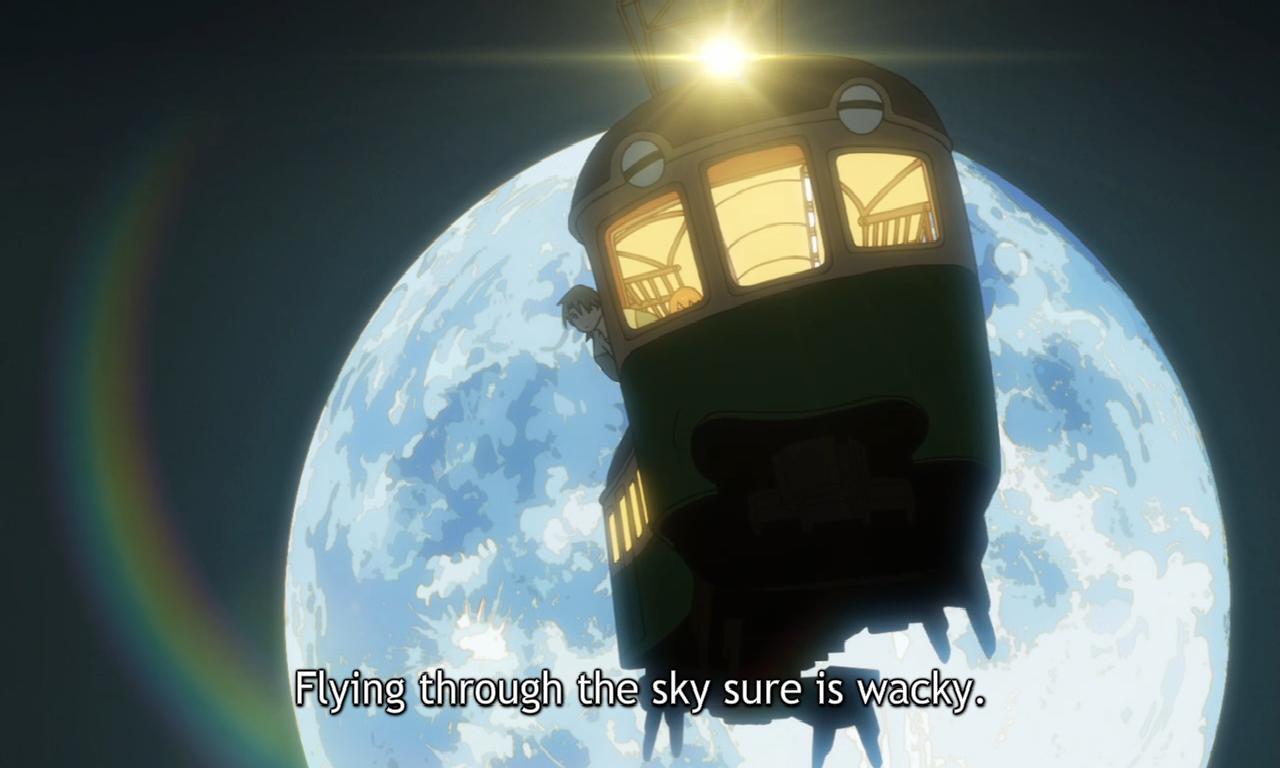 The Eccentric Family is available for purchase via NIS America (Amazon, RightStuf)

EDITOR'S NOTE — Hey folks, Evan here, chiming in to commemorate Ink on three amazing years of Drunken Otaku. Unfortunately this is the final Drunken Otaku column, as Ink is going on a hiatus from anime blogging for a little bit. I don't partake myself, but for those that do, now would be a good time to raise your glass to a three-year drunken celebration of our favorite anime, manga, and games. We'll miss you, Ink!