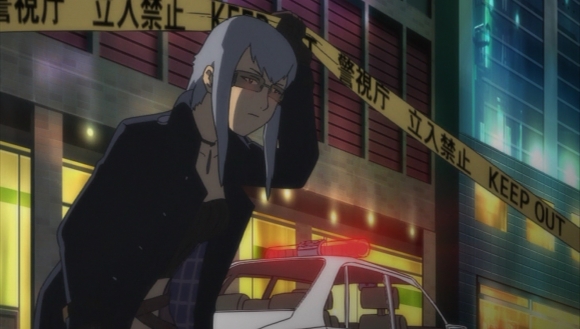 Meet Captain Hibari Ginza of the Tokyo Police Department. She’d make a great drinker if it weren’t for the fact that she’s usually only drunk with the euphoria that comes from the pursuit of fulfilling her detectively duties. Ginza, unfamiliar with not being in control, thus looses what little inhibitions she has and exacerbates her blatant selfishness when she chooses to imbibe. Well, I shouldn’t say “chooses.” After all, drinking is much less a choice than it is a destination when insecurity persistently proposes the possibility of a cheating lover and pictures of his presumed plaything are plastered city-wide. Add to this a crime wave threatening to flood her beat, and this great moment in drinking should be one all too familiar for those feeling overwhelmed by life.

While off screen and off the clock in Lips and Lies, there’s nothing to divert Ginza’s glare from images of her assumed rival in love — a loli held aloft in lingerie — on every product and billboard in town. So Giza, like anyone trying to forget, tries to take refuge by numbing herself with a few rounds. But as we all know, life is not so kind as to allow such a respite. A call about an alley murder interrupts Ginza’s self-pity session, and she races down in hopes of finding something interesting. 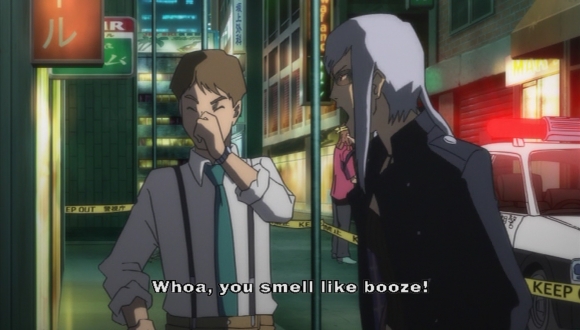 What she finds, however, is an irritatingly cheerful rookie who pretty much already has a handle on this random attack. Ooooh, multiple stab wounds, he seems to croon as he tries to engage his callous coworker. Ginza’s rotgut-ravaged mouth hisses her disinterest up his nostrils. After the shit she’s seen go down and heard about — men of rubber, women of diamond, decapitations, gruesome mutilations, underground explosions   —a random killing (even with multiple stab wounds) just seems banal and irksome for so being. With the crime scene pretty much figured out without her, Ginza leaves to do what every drunk, interrupted mid-drunk, does: drink.

While this is obviously not great behavior in any respect, it is a fairly accurate account of the contemptuousness and selfishness inherent in the human mind addicted to the depressant known as alcohol. You wanna feel low and wallow in that sorrow? There’s no better friend than a bottle whose warm embrace lets you sink into the Yangtze. Giza’s consumed by a sense of passion recently awakened by jealousy and exploited by circumstance, so the only thing left is distraction.

But when everything around is a reminder of that which is trying to be forgotten, be it a mundane existence or those pesky human emotions, eliminating some neurons via bittersweet poison is an oft-sought method of self-medication for many. Under its guiding influence, consequences seem less palpable, and all that really matters is the next drink. And as any drinker will tell you, signaling for another round, refilling the glass, or taking another swig from the sweet open lips of the bottle before you is, perhaps, one of the most comforting simplicities of this often wretched world. 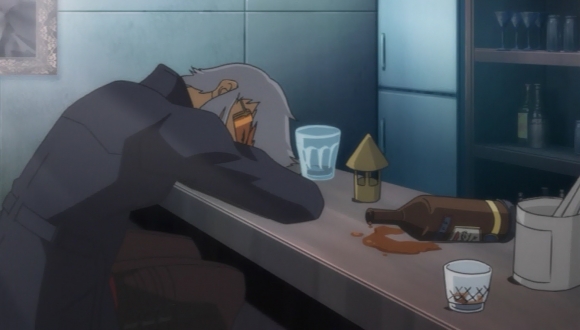 Speed Grapher is streaming on FUNimation.com and available via FUNimation's Store, RightStuf, and Amazon.