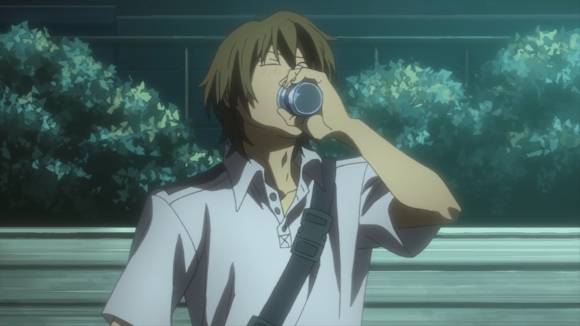 Nothing is more responsible for directing men and women to the bottle than love. In its name, alcohol is used—day in and day out—by the desperate for courage, by the libidinous to lubricate their carnal affairs, by happy couples for celebration and relaxation, by separate halves of frustrated pairs for mental escape, and by those who find themselves either recently or perpetually single for solace. But how often has alcohol been used by someone to sedate their warm body and anesthetize their reigning consciousness as to invite possession by a ghost who was also a romantic rival? Only once (that I have observed), which makes the following a truly great moment in drinking!

That scenario might sound far-fetched, but it’s an actual plot point in Natsuyuki Rendezvous. The best part is just how realistic the portrayal of humanity is, given the influence of overindulgence, in the situations leading up to said surrender. But first, some background:

Rokka is a 30-year-old florist who owns, manages, and lives above the shop that was previously her late husband’s (Atsushi). Hazuki’s been stalking Rokka for some time, stopping into the shop to buy plants he doesn’t need just to be able to get her fingers to grace his palm when she hands him change. Eventually he comes to work there, confesses to Rokka, and tenaciously tries to woo her. Atsushi’s been gone some 8 years (coincidentally the same age difference between Rokka and 22-year-old Hazuki), but he’s been invisibly hanging around Rokka the entire time and helplessly keeping watch over her. Needless to say Atsushi doesn’t appreciate Hazuki making moves on his former wife and does everything he can to dissuade him from disrupting their “life” together. This includes Atsushi repeatedly asking if he can “borrow” Hazuki’s body once it’s revelaed that Hazuki is the only one who has been able to see/hear Atsushi since his death.

With Atsushi’s proposal etching itself in the back of Hazuki’s mind via repetition like a penal colony sentence, he asks Rokka to Hanayashiki amusement park in a last ditch effort to nudge their relationship forward. He knows she’s been there with Atsushi before, but Hazuki hopes to scribble over that haunting memory by making Rokka smile himself in that same place. Hazuki’s a persistent lad, but Rokka wavers between wooed and woeful. Thus begins the drinking. 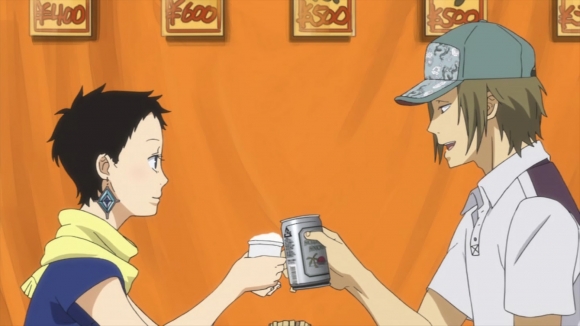 Both have a little beer before entering the park. Half a can ain’t much, but it’s just the confidence placebo Hazuki’s aggressiveness needs. After a forward advance in a private cabin in the clouds is thwarted by an all-too-abruptly ended ride, after a bridge crossing makes Hazuki into Eurydice, after hearing Rokka say she just can’t get over Atsushi, after being laughed at for bringing up sex, Hazuki snaps—his drive defeated, his ambition gone. Thus he accepts the final nail in the perceived coffin of this attempted manipulation of memory dressed up as a romantic outing: Rokka offering to end the date by showing Hazuki how to … open the shop (not a metaphor). 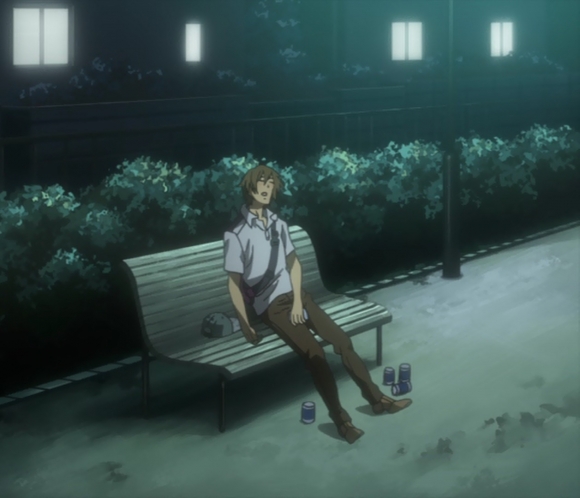 Before he can contemplate following Rokka into Atsushi’s old haunt, Hazuki opts for the sweet, emotionally numbing effects of beer. Using cigarettes as an excuse, Hazuki introduces his sorrow to a six-pack he downs in the park on the way back to the shop. Stumbling too slowly to avoid the poltergeist’s greeting, Hazuki near passes out from alcohol poisoning and, on the precipice of his inebriated slumber inspired by self-pity, agrees to let Atsushi borrow the flesh so recently rejected by his lady love.

If that situation ain’t enough to make ya wanna drink, what happens over the next seven episodes (let alone the very next episode) surely will. As for this great moment in drinking, there’s intentionally insensitive actions, rash decisions, emotional manipulation, finger sucking, the breaking of a soul’s resolve in the harsh face of honest laughter, and, ultimately, the transcendence of otherworldly boundaries via a staircase of beer cans reflecting the enlightenment of self-perceived failure. Thus a malty numbing of pain becomes the apathetic door through which Atsushi gains entry into Hazuki's head. What more could you want in a love drinking story? 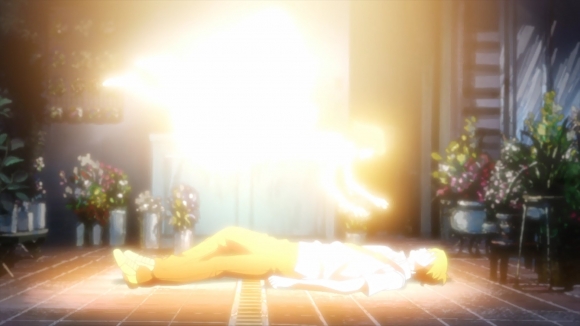