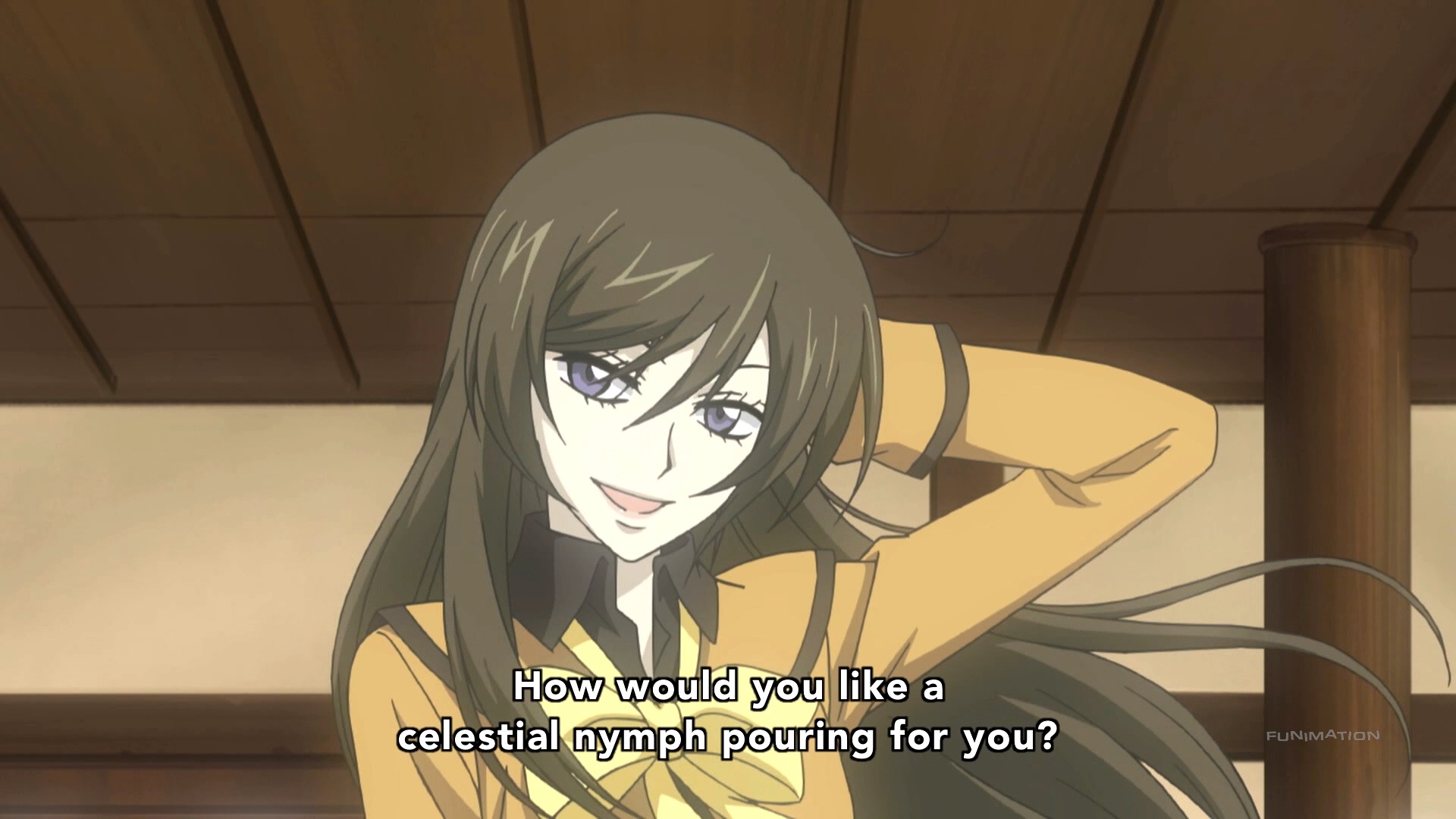 Two months after tengu king Sojobo falls critically ill, a miasma blankets his beloved Mount Kurama, suffocates the land, and snuffs the quarterly flames of the eternal cherry blossom tree (the heart of the mountain). The next strongest tengu, Jiro, is hastily chosen as successor. Quickly reviled for his strictness and cruelty, Jiro becomes so hated yet so impossible to dethrone that it takes a runaway runt (Bontanmaru), by way of crow, contacting a tengu outcast-turned-real-world pop idol (Kurama) to right things. Of course, Kurama can’t do this all by himself. This infiltration mission takes the all-but-inept land god Nanami, her tagalong familiar Tomoe, and, of course, alcohol (the one true hero!) to put things right. Let me slur ‘xplain:

A tengu is a crow-like warrior with great physical strength and supernatural abilities. One of those abilities, at least in regards to Jiro in the second season of Kamisama Kiss, is the ability to erect a barrier that conceals via obfuscation. This barrier is maintained by his highly honed discipline and requires constant concentration. The presence of a former outcast, even without his newly granted godly status, is trying enough to someone just about to ascend the throne. But add the inner conflict between a monk-like lifestyle and a coincidental run in with a celestial nymph who seemingly just brought the heart of the mountain back to life, and these are trying times indeed! 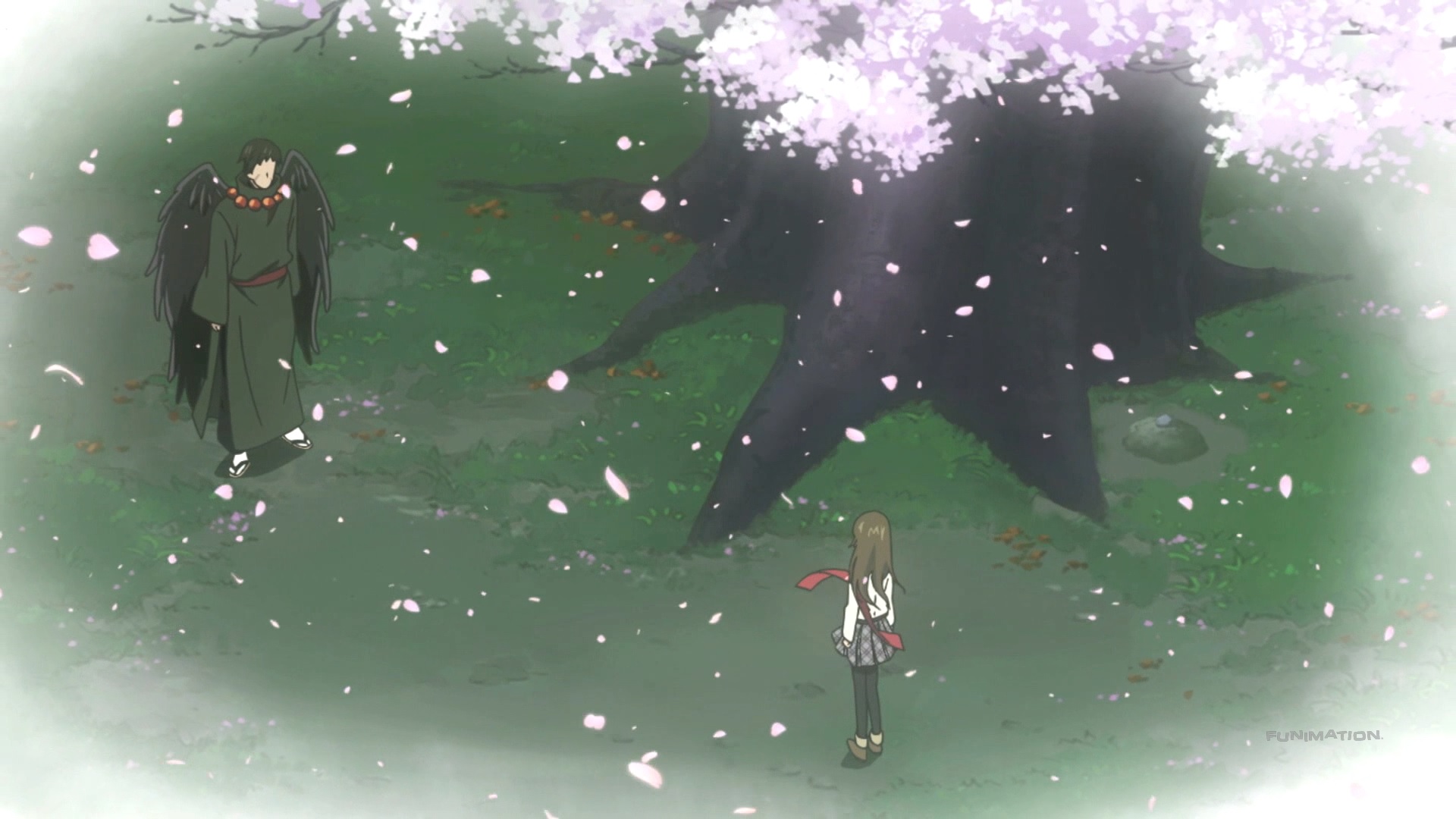 Because Nanami is female and thus not allowed on Mount Kurama, Jiro’s reaction to her presence — grabbing her arm and arresting her — is a justifiable one (if only harsh in effect due to the strength he takes for granted). Unluckily for Jiro, that celestial nymph (Nanami) escapes his arm-breaking grip with the aid of her monkey minion. That fortune is weighted unfavorably in two ways: Nanami lives to tell the tale to her awesomely powerful familiar, Tomoe, and she, as the mysterious celestial nymph, remains in Jiro’s memories as the one that got away. (The dude has problems, OK?) 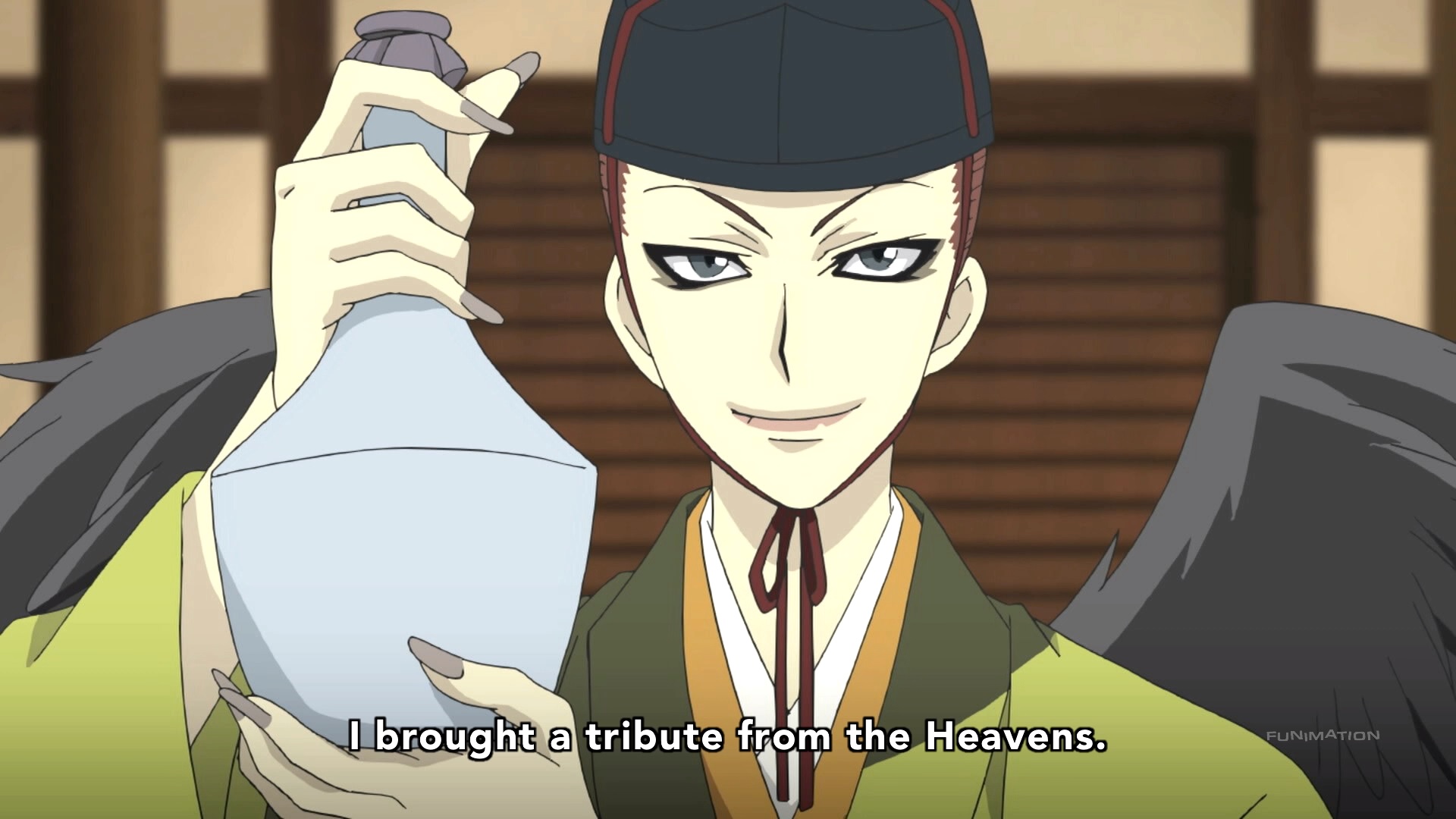 Jiro, with his heart and mind in disarray after meeting Nanami, meets with Kurama, who proclaims himself a god and offers up some sake, fresh from the "mundane world," in celebration of Jiro’s ascension. (Little does Jiro know that the sake in question is actually “medicinal sake,” which, according to Kurama, is supposed to lay waste to any ethereal spirit with its Earthly ethanol content.) While Jiro’s obligated to accept a god’s gift, there’s really no better time to imbibe given the compounding apprehension over ascending to the throne in two days’ time, a lost love-at-first-sight, and looking good in front of a former minion-turned god. BRING ON THE SAKE! 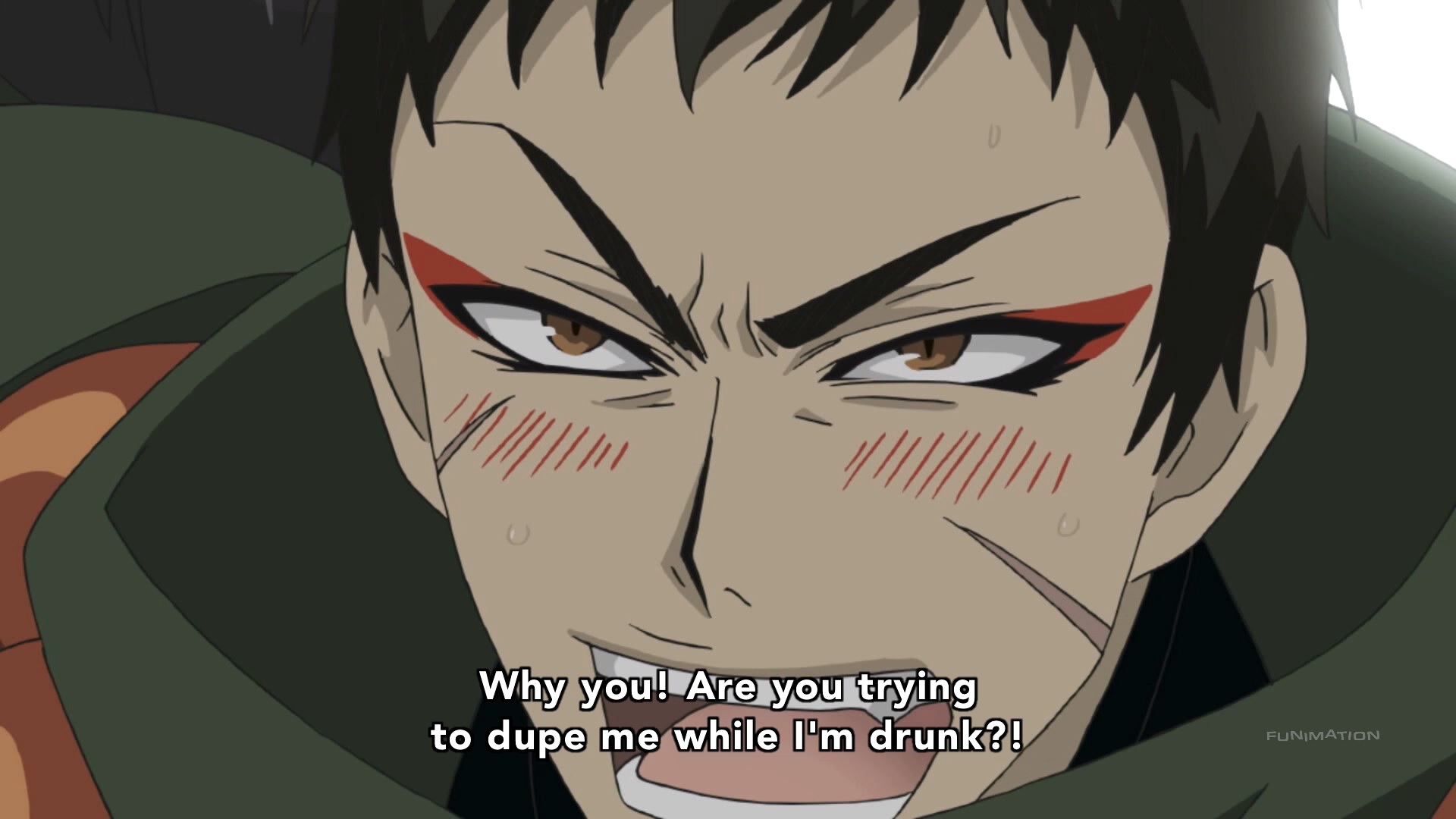 But alcohol is not so easily employed as a duping agent. As it turns out, one measly sake saucer, no matter how full with high-proof libations, is not enough. (Turns out Jiro might be a contender for the title of Great Drinker!) The plan backfires; Kurama is wasted just after the first saucer. So Tomoe, taking Nanami’s form and adopting a coquettish tone, offers to fill Jiro’s beer goggles as a celestial nymph in order to keep the plan going. Any truly great drinker, however, is at least aware of the fact that time is a huge factor in feeling drunk. 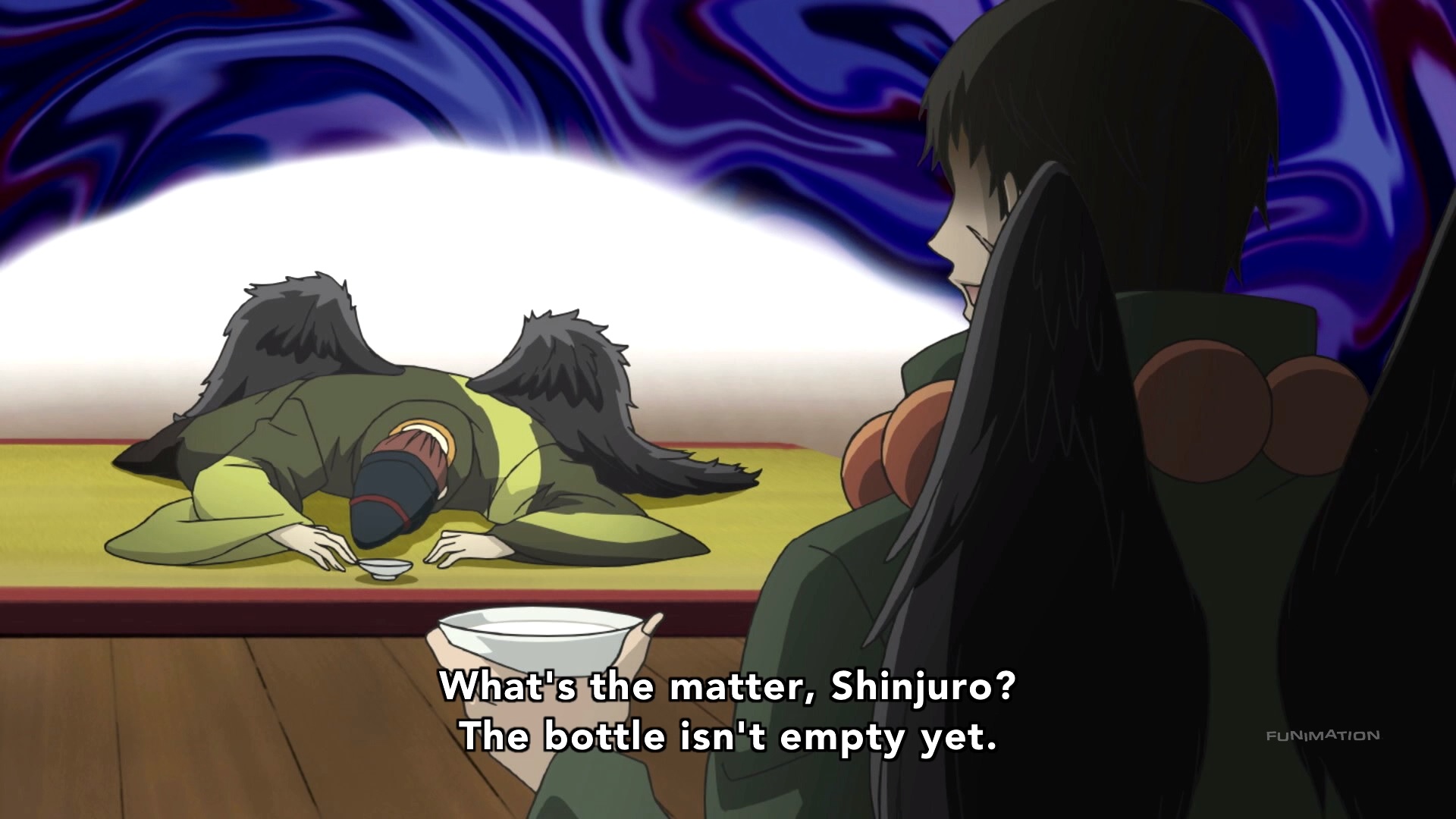 Tomoe, as Nanami, turns his full attention turned toward Jiro. His heart races. The alcohol in his blood-thinned veins finally reaches his brain. Is the fox’s real form male? Female? Does it matter to primal urges? (Not when you’re drunk and in the moment it doesn’t!) Of course, Jiro tries not to appear to be under the influence of the mundane world, but he’s doubly inflicted. The euphoria of something as alien as the softness of a female nuzzling his side, combined with the alcohol warming his heart vicariously through his veins and arteries, proves too much; Jiro gives in and drops his defenses. This gap allows the actual Nanami (and Bontanmaru) to locate the sickly king. Soon (but not immediately) thereafter, all characters go on the mend. Another victory for good ol’ alcohol! 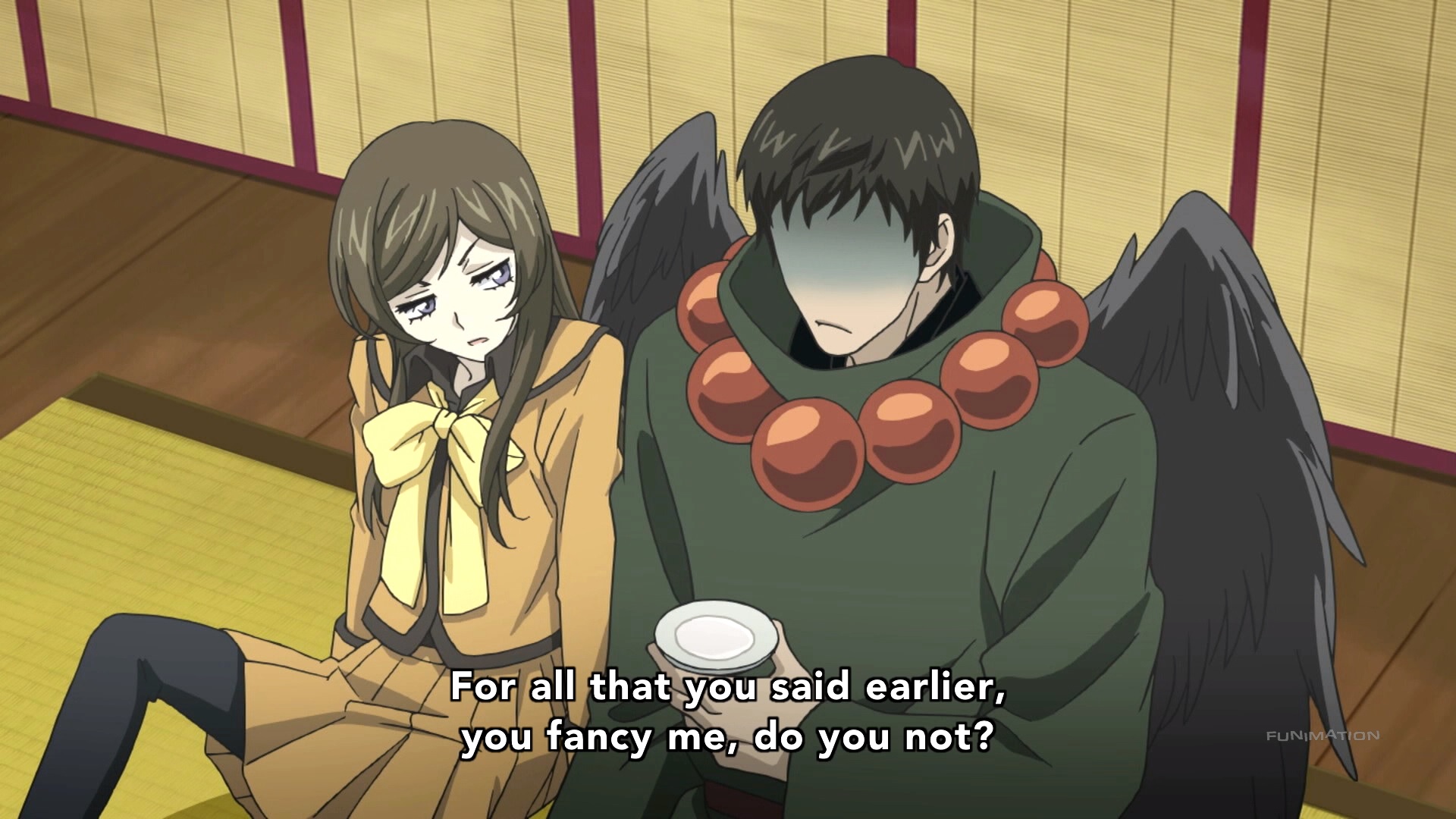