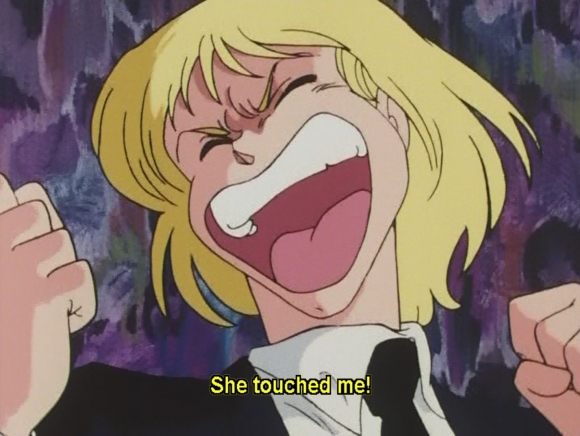 It's said that love conquers all, but seeing as alcohol has ruined many a relationship, wouldn't it be more accurate to say that only the next bottle may lay claim to the throne as the rightful successor? And really, the bottle's just a vessel; it’s the alcohol therein which makes blue bloods of anyone by entering their circulatory system. So all hail the king who needs not rely on the fickle whim of crop yields to conjure forth inebriation. All hail the king who needs not yield to shoppes' authority of hour to procure his God-given right! All hail Dionysus incarnate! All hail ... a shut-in who's in love with a mannequin?

"An Unjustified Lover's Grudge. Let Me Love You Without Revenge," Dirty Pair Episode 19, features a young anime man, Lore Reamonn, who has watched a little too much real life and ends up emulating it (with predictably disastrous results). See, Reamonn has an “idiosyncrasy,” an allergy to flesh-and-blood women that makes him break out in sneezing fits whenever any female comes within three feet of his person. And if a woman dares touch him, then his eccentricity gets … intoxicating.

Upon even the most casual bump of epidermal uglies with a member of the opposite sex, Reamonn’s cerebral cortex releases agarno fluid into his blood. This turns the glucose in Reamonn’s body into alcohol and gets him real drunk real fast. The very nature of his affliction is one defined by excess and binging: all or nothing. Sure, he may drink wine for two at dinner since his chosen companion has no internal organs, but everything’s relative. After all, once he’s touched by an angel, Reamonn becomes his own weight in alcohol. So any imbibing in-between outbreaks of promiscuity-induced overindulgence is water by comparison. 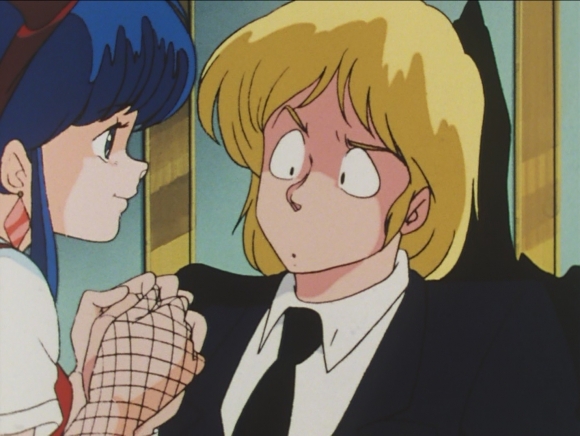 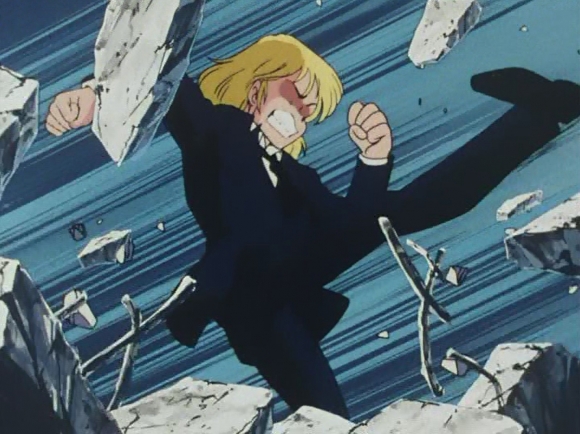 While this is a dream come true for most lovers of delirium, the alchemic reaction of touch to intoxication is torture for Reamonn. His binging leads to blackouts where his maid has to recount the evening’s events from across the room, and it’s downright amazing that the fits he throws doesn’t leave him in tattered shirt and ripped purple shorts. While suffering whole-body alcohol poisoning, Reamonn flies into an unstoppable rage. He screams, breaks concrete, hurls the resulting rubble, performs flying kicks, picks up huge machines, and throws them too! Super powers from alcohol? Most people think they have them when drunk, but Reamonn is the genuine article! 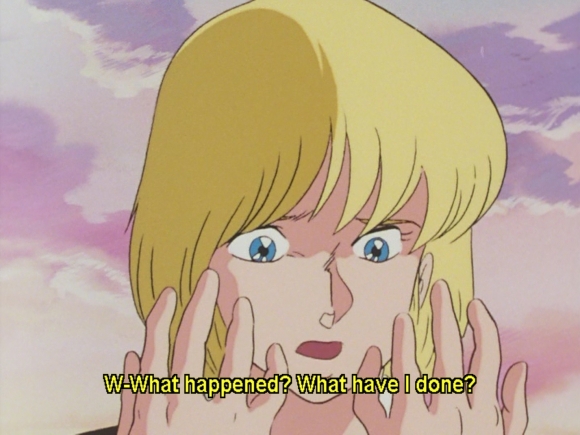 Like a slack-jawed, teary-eyed Bruce Banner trying to come to terms with the havoc he’s unconsciously wrought around him, Reamonn withdraws into himself the mornings after in an attempt to make good. He dedicates his tactile tenderness solely to his dearly beloved sponsor Meshuzera, a plaster statue molded by his own hands, and other inanimate objects in hopes of restraining his brut-ish form. This way, he’ll never again endanger the emotions or physical being of his nearest and dearest (namely Miralda his faithful maid) or anyone within the world-at-large. Of course, recovery is never so easy a road. The wrong thing happening at the wrong moment could trigger a relapse. So God save whoever removes that failsafe from the equation ... lest the combination of Reamonn’s capacity and intolerance for the drink destroy everyone.