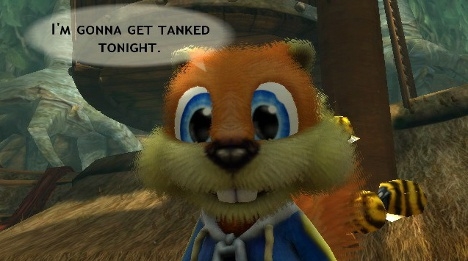 His story: In a tale to which any drinker can relate, Conker’s just a kind-hearted squirrel trying to get back to the comforts of home and girlfriend after having a few too many rounds of beer with the guys at the local pub. As hard as it is to tell left from right in such a state, it’s equally tough to tell the right way from the wrong. As one not inclined to luck, Conker chooses then stumbles along a path that ultimately never crosses his doorstep, but one that ultimately makes him a hero. Like an ant can lift, Conker can drink 10 times his weight in beer. Unlike an ant, Conker will soon be staggering about and puking every few paces after he downs that final glass or chugs the keg dry. Though to be fair, I’ve never seen a post-work ant (lies). So why tolerate this lightweight? Well, once Conker’s starts imbibing, he’s not gonna stop. In the immediate, this is a good thing. Conker can be convinced to buy rounds when it’s not his turn, and he is an animated conversationalist, with a wry sense of humour to boot. Even when things go sloppy and Mr. The Squirrel opens up his shorts to relieve his bladder from all that beer (despite the presence of company or lack thereof), Conker can keep his drinkin’ buddies safe from fire imps and rock monsters by turning all that ingested yellow liquid into ... pressurized yellow liquid. So why welcome him back to your table? Didn’t I just mention he can save you from fire imps ... with his pee?! The squirrel spites his liver ... for you, and you don’t appreciate him? Sheesh. Well, consider this: all that drinking costs. To replenish that cash (and with it, memories and time) of which he's been duped, Conker will need to earn some dough. Being menaced by an operatic mountain of poo? All conker needs is a gas mask and his trusty B button. Have a dinosaur that needs to be hatched? Sacrificed? Either way, Conker needs the cash just enough to get it done. Vampire bat needs feeding? Conker’s in the know! Hornets made off with your bee hive (yet) again? Conker’s willing to infiltrate THEIR hive to get it back for you! Nazi teddy bears want to be Nazi teddy bears? %@*& that ^#$&! Conker'll show ‘em what-for! So use him. Abuse him. So long as he has a weakness for beer and a need for cash, Conker will be the one living adventure after adventure, racking up stories to slur while wearing the crown at the bar of great drinkers.