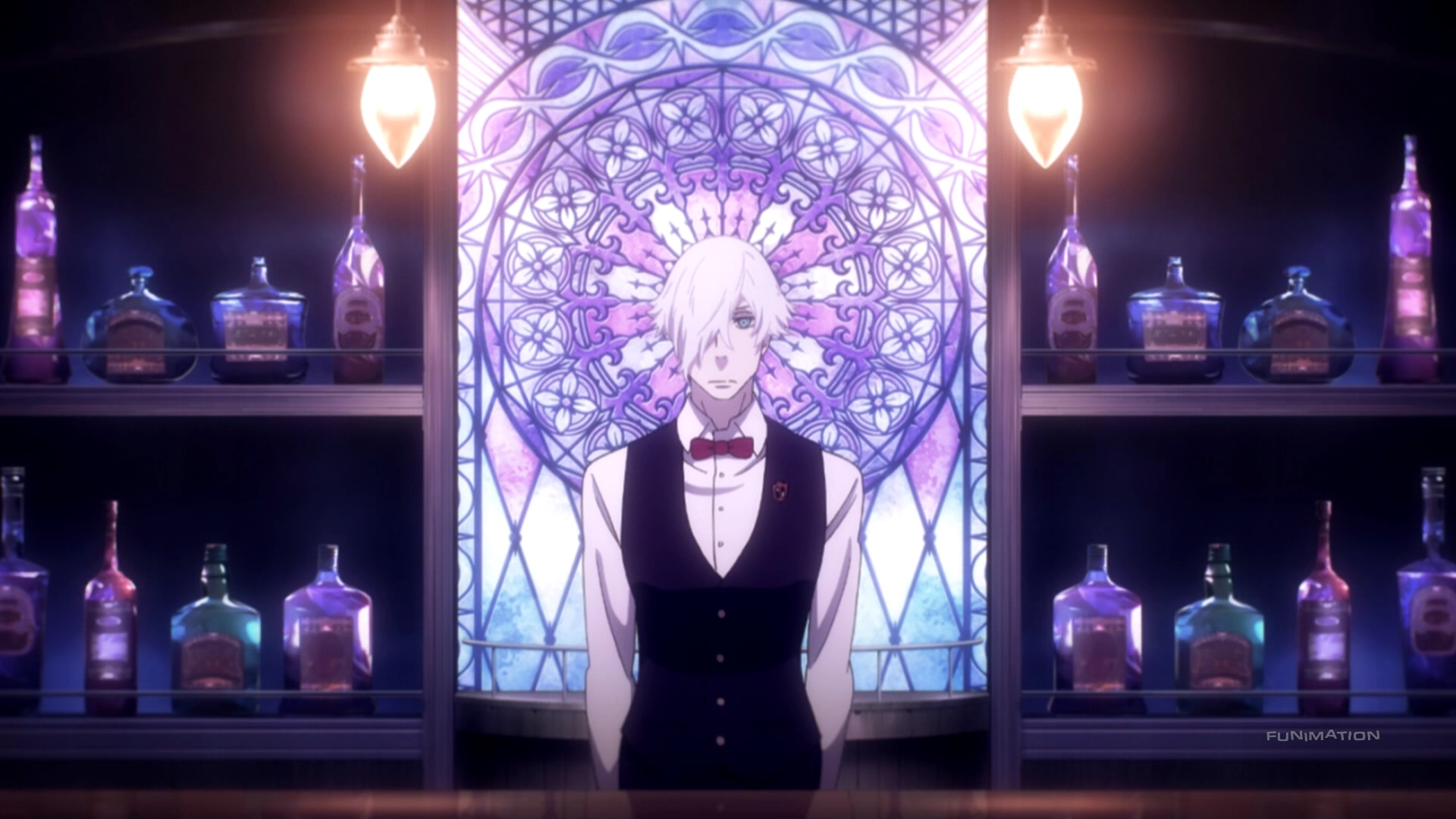 Named in honor of or perhaps pity for its subsequent arbiters-turned-managers (or vice-versa), Quindecim is a bar, in most respects, like any other: there's a bevy of bottles behind the counter, an observant barkeep to pour your picked poison straight or mixed to taste, and a stool waiting to take your weight a while. What sets Quindecim apart from typical bars, however, is that visitors' memories increase and become clearer the longer they stay. Well no-one lingers longer than Chiyuki, and no door (front, elevator, or otherwise) is heavier to close than one by a bartender after such a bittersweet last call.

If you've yet to see Death Parade, feel free to do so. Also, you've been warned: only the following break separates you and spoilers.

If Bartender can be believed, it's not uncommon practice for Japanese bartenders to make sure specific stools are kept empty at certain times to accommodate their regulars. It makes sense from a business and behavioral standpoint. We, as humans, are largely habitual. Think back to your schooldays; even if you hated the very idea of assigned seats, you most likely sat with the same people at the same table during lunch every day of your own free will (and enjoyed it). Conversely, occupying a different space was undoubtedly uncomfortable to some degree even despite the regular company.

But what do we actually remember of those with whom we were so close once upon a time? Only fragments, really, imbued with emotion(s) — a general sense that can often be tainted or outright false. Still, the presence of recollection is truth to the mind and reminder of an identifiable (albeit idealized) state of being. As the means to such ends, some people keep Polaroids. Decim, on the other hand, keeps dolls. Rather, Decim makes mannequins — lifeless collections of posable prostheses modeled and guised after past guests (or guests that have passed on) — as homages to those who earned his respect by having lived fulfilled lives. 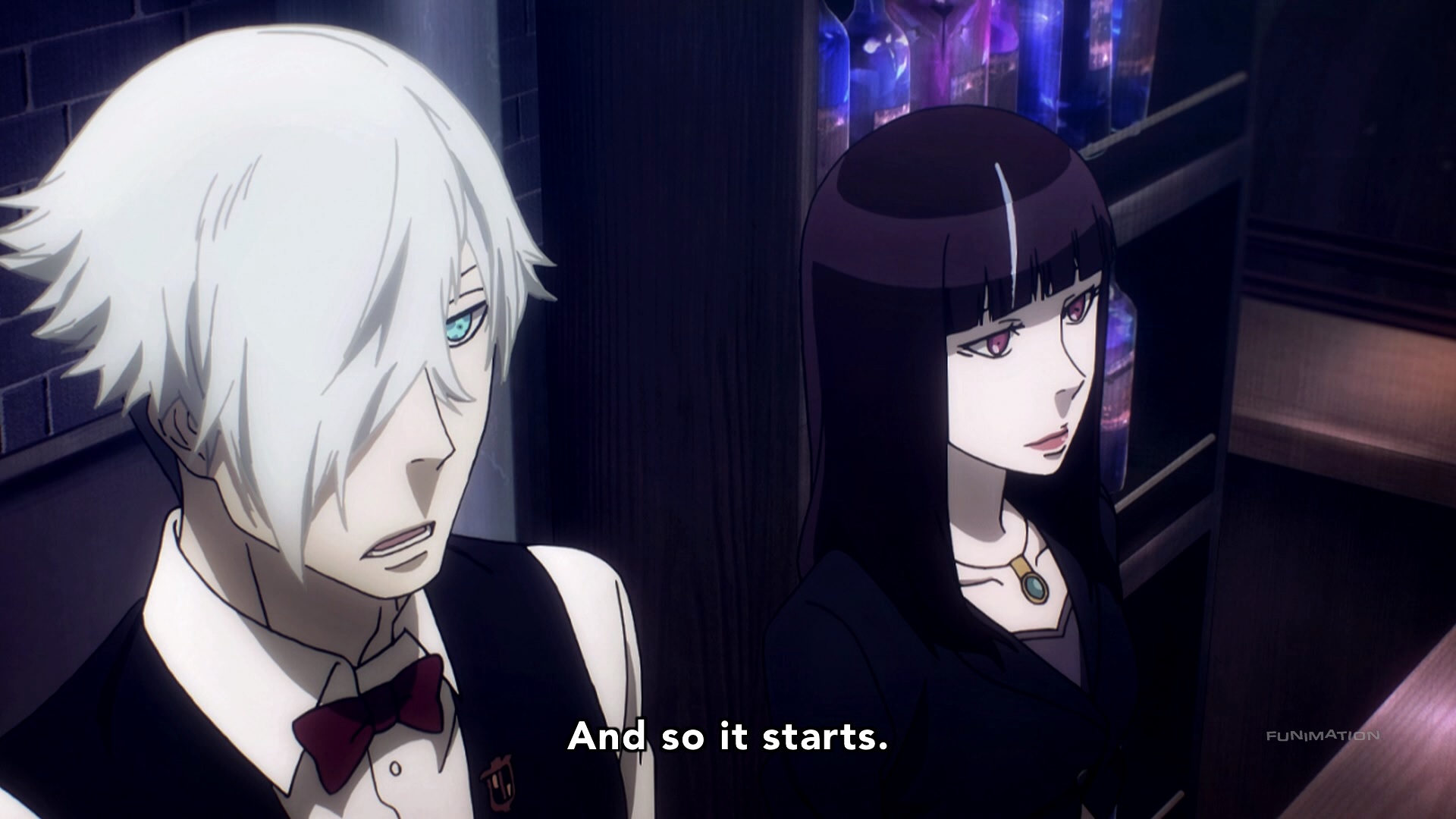 This is the hobby Decim has to keep in order to come to terms with his contradictory self: a dummy, imbued with human emotions, whose memories are remotely and forcibly wiped clean at random intervals to maintain a sense of objectivity for each new guest he hosts as an arbiter. And despite all his effort, the dozens of distinctly fashioned observers sitting in the balcony vary only in visage — their styles merely window dressing and actions but puppetry. Even the bar’s animated centerpiece, a mannequin propped up at a piano, only blindly bludgeons the keys as if frustrated over a forgotten tune. But these were all, presumably, inspired by one-night stands.

Chiyuki on the other hand, is an anomaly. She arrives at Quindecim with vital portions of her memory intact. Called in to advise on this situation, the head arbiter (Nona) decrees that Chiyuki’s memories have to be wiped and resorted in order for her to receive proper judgement. While this reformat is being processed by the backlogged information bureau, Nona decides to perform a little experiment: what effect will be sewn by having a human serve alongside Decim? This is how an arbiter gains an assistant and the (mostly) unspoken rule forbidding human-arbiter relations, “Arbiters may not work hand in hand with life, for that will ruin them,” is called into question. 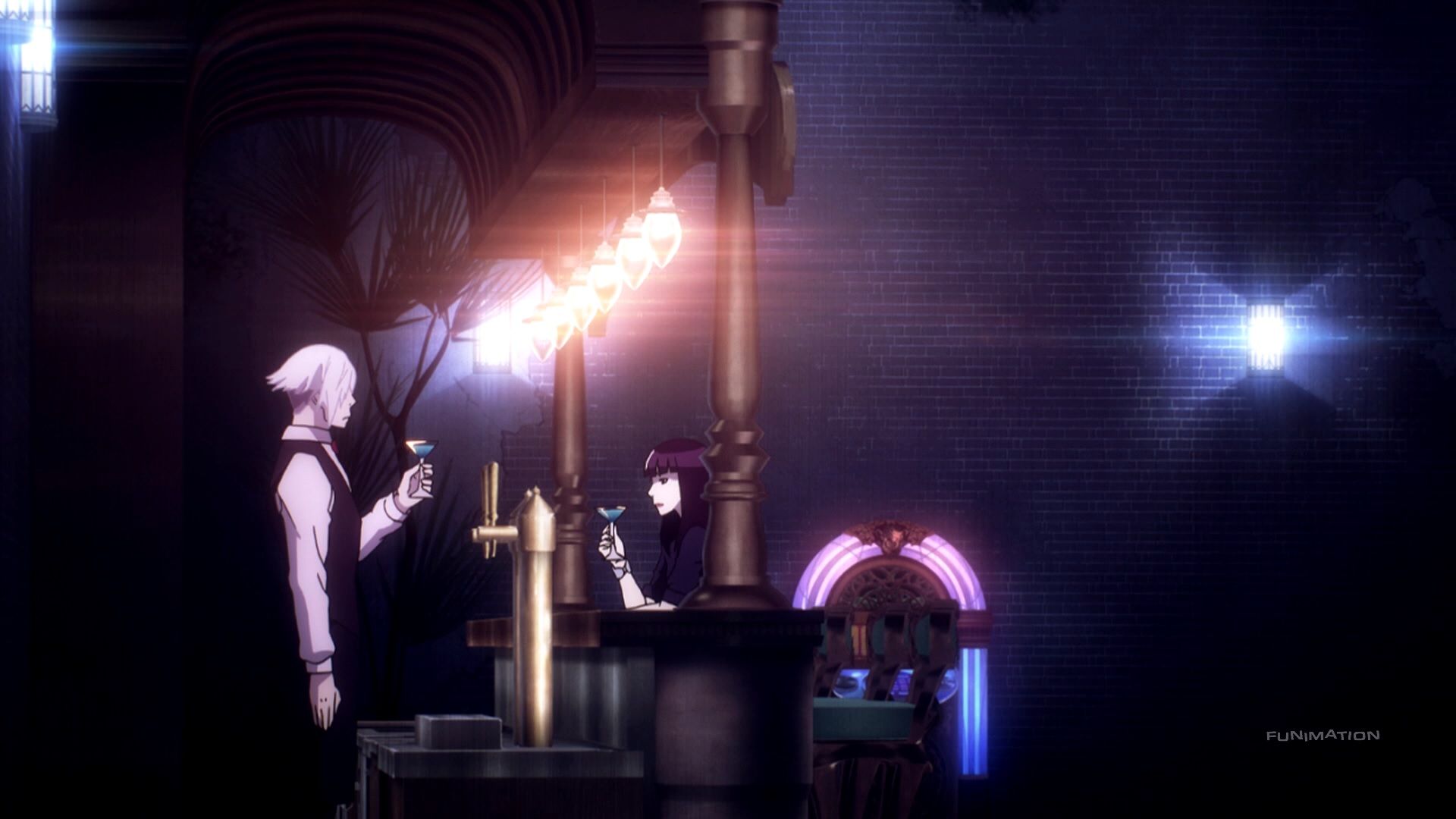 Viewers aren't able to ascertain the impact Chiyuki has on Decim relative to the inspirations for the other mannequins he's fashioned over the years, because none of them are deserving of that degree of respect within the show's 12-episode run. (Even the pianist only gets a passing shrug.) Those 12 episodes are devoted to defining Chiyuki as something as precious and worthwhile as time in a place where an unyieldingly oppressive workflow demands snap judgements. Since Decim’s emotions are artificially implanted without the context of life so foreign to arbiters, Chiyuki, though just a (more concentrated) construct herself, is more or less Decim’s guide to the pragmatic emotions he hosts and those he inevitably accumulates while passing judgement on the souls brought before him. This is what makes Chiyuki’s final resting place in Quindecim so bittersweet. 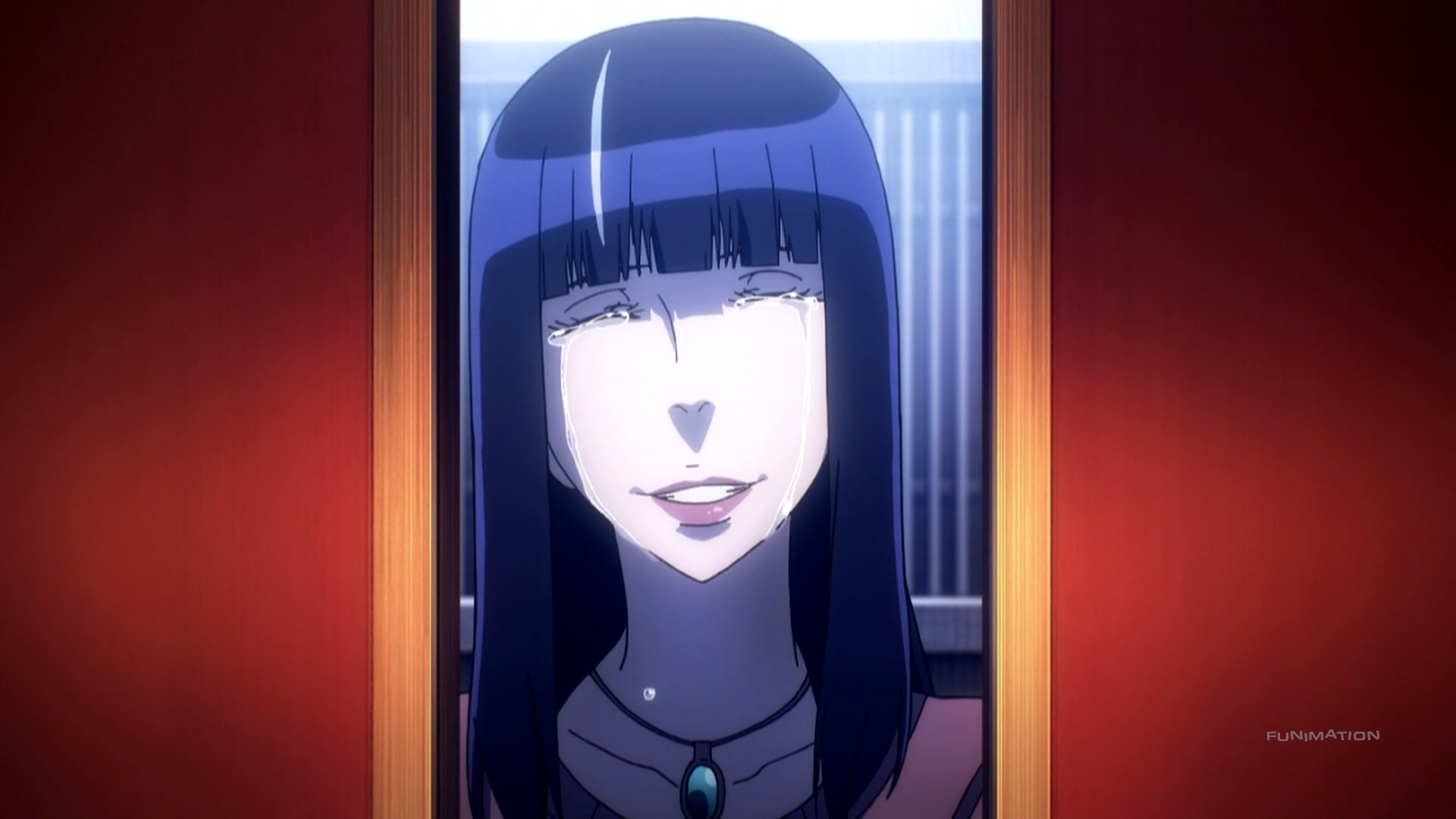 After her judgement, Chiyuki’s frame gets an honored seat behind, not at, the bar. She is more than a visitor; Chiyuki proves herself a necessity and will be by Decim’s side through judgment after judgment for as long as he’s making cocktails. While that’s all well and good, Death Parade takes great care not to retract its premise about arbiters’ memories being wiped. That means even this momentous meeting, as extended and impactful as it was, will be reduced to the same nothingness as all the other fleshless faces throughout the bar. The impending loss of her effect on Decim, of her humanity in general, is then rendered as equal to the audience as Decim’s eye contact with Chiyuki being broken by the bar’s elevator doors. Optimism demands this will be something so “life”-changing that Decim has no choice but to remember, but even genuinely made memories dissolve with time despite their accumulated mementos that ultimately end up blending into the scenery. 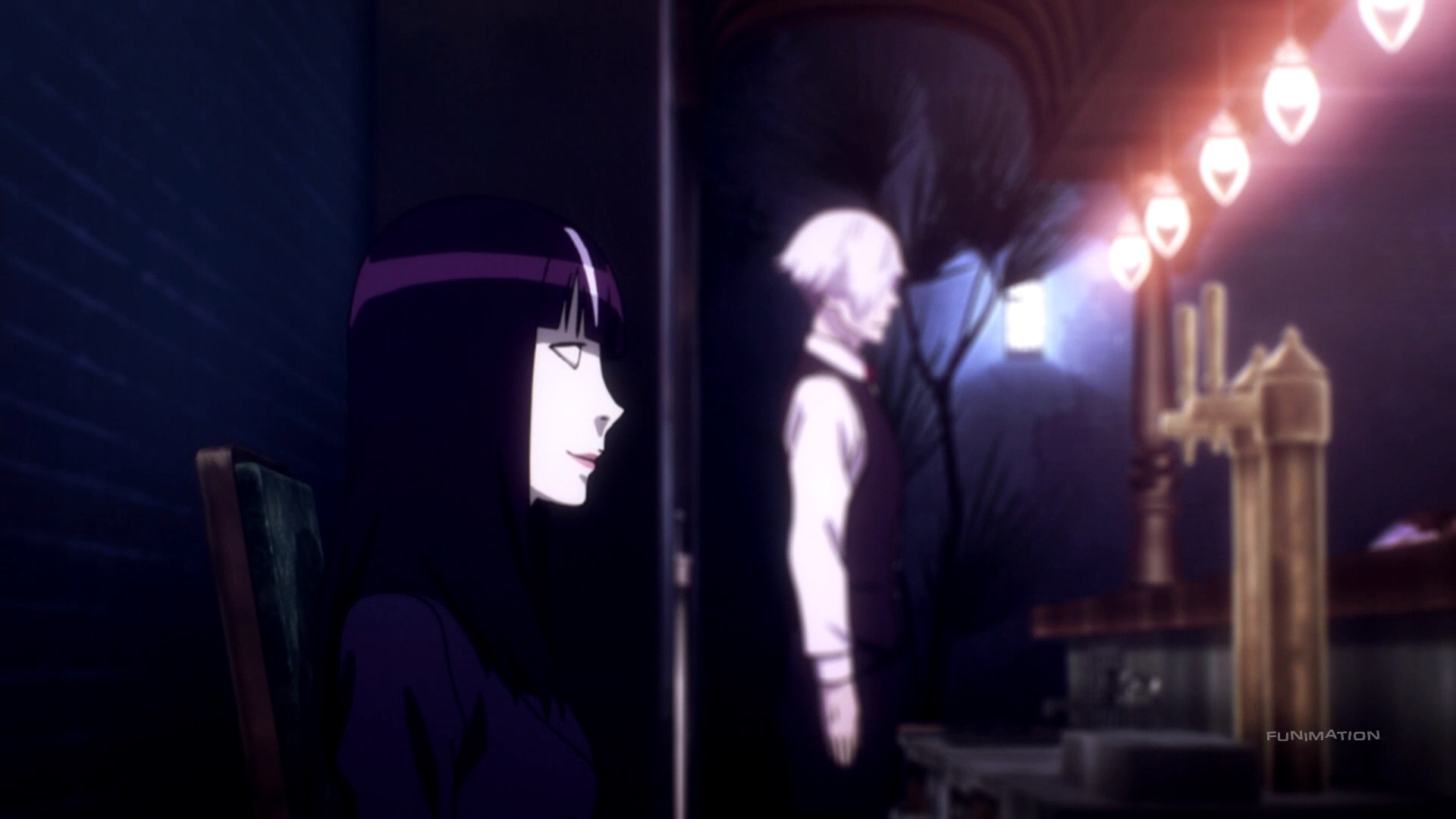 Death Parade is streaming on Funimation.com and Hulu.