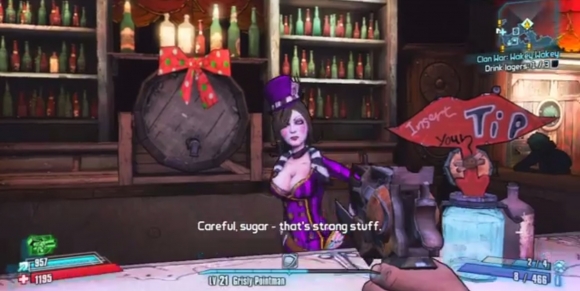 What starts off as a puckish revival of the Zaford-Hodunk clan war, from which the dust of Pandora has just managed to settle, ends with a great moment in drinking. (I use “great” in the same sense as Adolf Hitler being named Life’s Man of the Year). It all starts off innocently enough. As a vault hunter (read: mercenary) hired by a sweet southern peach named Ellie, you blow up a Hodunk landmark (a big ol’ tire) and then plant the Zaford family emblem. Then you blow up a Zaford landmark (a distillery) and then plant the Hodunk family emblem. You get the pictu … WHY DID YOU JUST MAKE ME BLOW UP A DISTILLERY, GAME?! 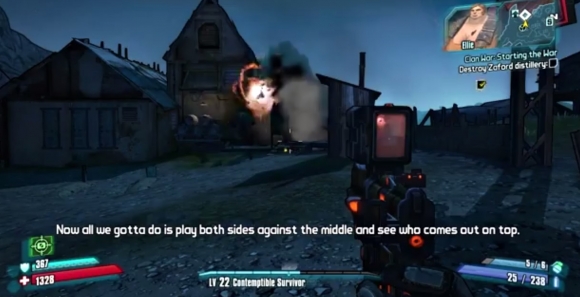 If there was an Academy Award for best tears, it would go to the documentary which shot my reaction while playing this part of the “side mission” in Borderlands 2, where this atrocity takes place. But since the footage was destroyed before it could be released, I hold out no hope. Sure it was fictional booze, but those poor, thirsty, racially stereotyped, clover-bearin’ Zafords are left with dry, fictional tongues and worse yet: fictional sobriety. The humanity! The calamity! The woe! … but this is just the beginning. And remember: YOU, the player, are responsible. 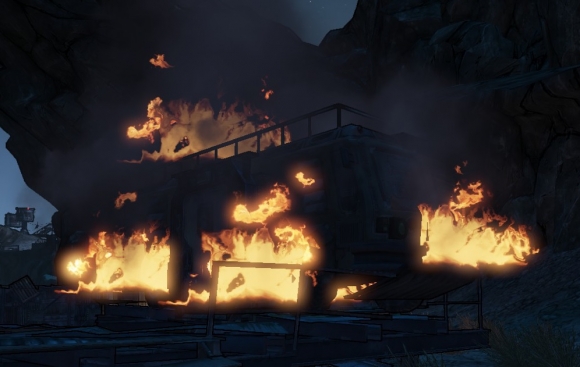 Both clans have been smote and immediately assume the other to be responsible, but it’s the Zafords, fueled by alcoholic rage, who strike “back” first by hiring a local roving mercenary (guess who) to blow up the Hodunk’s racetrack ... while the Hodunks are racing. Three lives (and collateral expirations) as recompense for not only a tank full of unborn alcohol but the very means by which to make it seems a very light punishment, but the Hodunk’s take great offense for some reason and hire a gunman (guess who ... again) to get even. So you stalk a midget into a cave, kill him, and rob the Zafords of their chests of future liquor money. What’s liquor money worth to the Zafords? It’s worth about an entire trailer park of sleeping Hodunks! Yuuuuup. Can’t even blame being drunk at the time for igniting trailer after trailer of tornado bait … unlike the next part of the mission, which is this month’s great moment in drinking.

There’s a wake goin’ on at the Zaford camp for one of their own, who was mortally wounded by a Hodunk. Naturally, it takes place in the family-run bar, The Holy Spirits, and all vault hunters who’ve recently helped the clan are invited. But before you can make it, pappy Hodunk needs a hired hand once again. With the screams of those who turned into thick black smoke rising through the starless sky still fresh in his mind, pappy Hodunk wants his vicarious hand to pick up a bottle and then another bottle and then another bottle at a bar in Sanctuary to get just drunk enough to be eligible to enter The Holy Spirits. That’s right: Zaford policy states “you must be this drunk *hiccup* to grieve.” Being a little tipsy may be the password, but it’s also a moral requirement.

Your final mission in this clan war, which you, player, started, facilitated, and escalated (at the insistence of Ellie and the insatiable gnawing of your own greed), is to crash a wake and make all attending Zafords pay. As a vault hunter, you can shoot the priest, shoot a child, shoot a woman, or shoot a man, but once you do, every single person whom you did not shoot will draw a gun and shoot back. When the cordite clears and the tinnitus caused by blasts echoing off wooden walls fades, The Holy Spirits, which could now be more aptly described as The Holey Spirits, rewards your immoral behavior with the drinker’s dream: being alone in a bar with all its remaining alcohol. 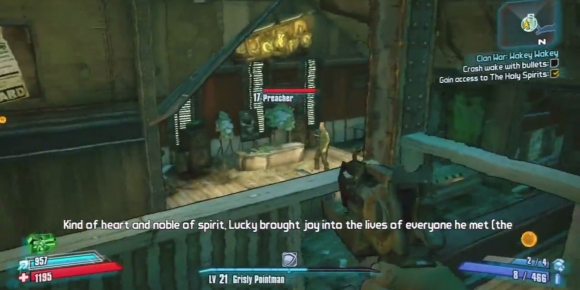