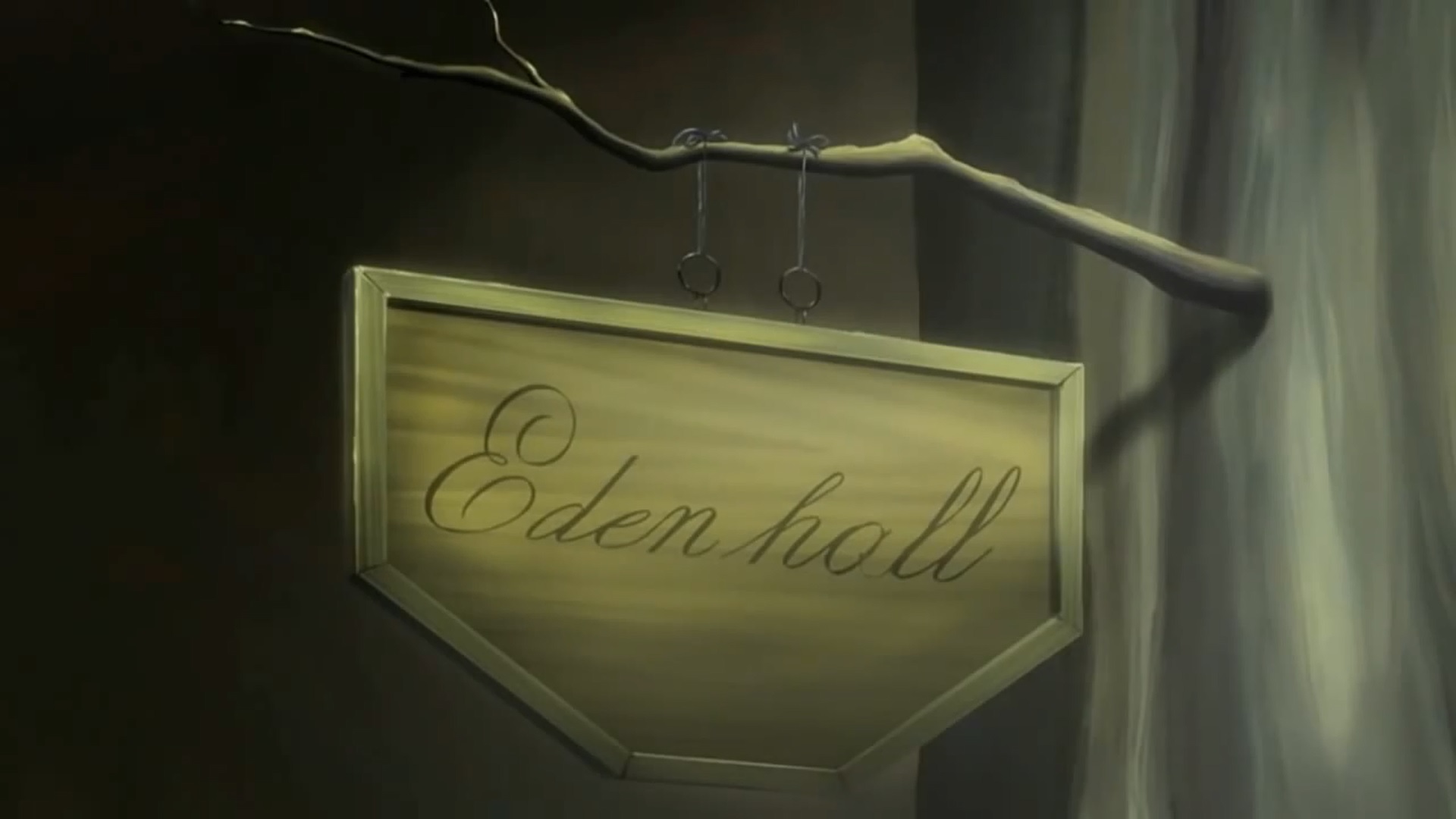 A bar is a hideout, a fortress with a high-proof moat, a haven for wading in a tasty something while waiting out whatever squall rages outside the weighty entrance door. Inside the bar, inside each of its patrons, another storm rages, and the bartender’s job is to assuage the atmosphere to help stay the resultant ripples of anxiety within those seeking refuge; drinks are only a part of that recipe. At least, that’s how the anime Bartender romanticizes it.

The worst aspect of any bar to any asylum seeker is the unavoidable reflective surfaces: the bottles, the glasses, the plane of a still drink, and the eyes of surrounding patrons. That’s why, for the customers, the lights are dim, and that’s why the bartender must employ keen instincts and impeccable demeanor to match drink to patron. After all, a customer may order the drink they want, but that’s not necessarily the drink they need. 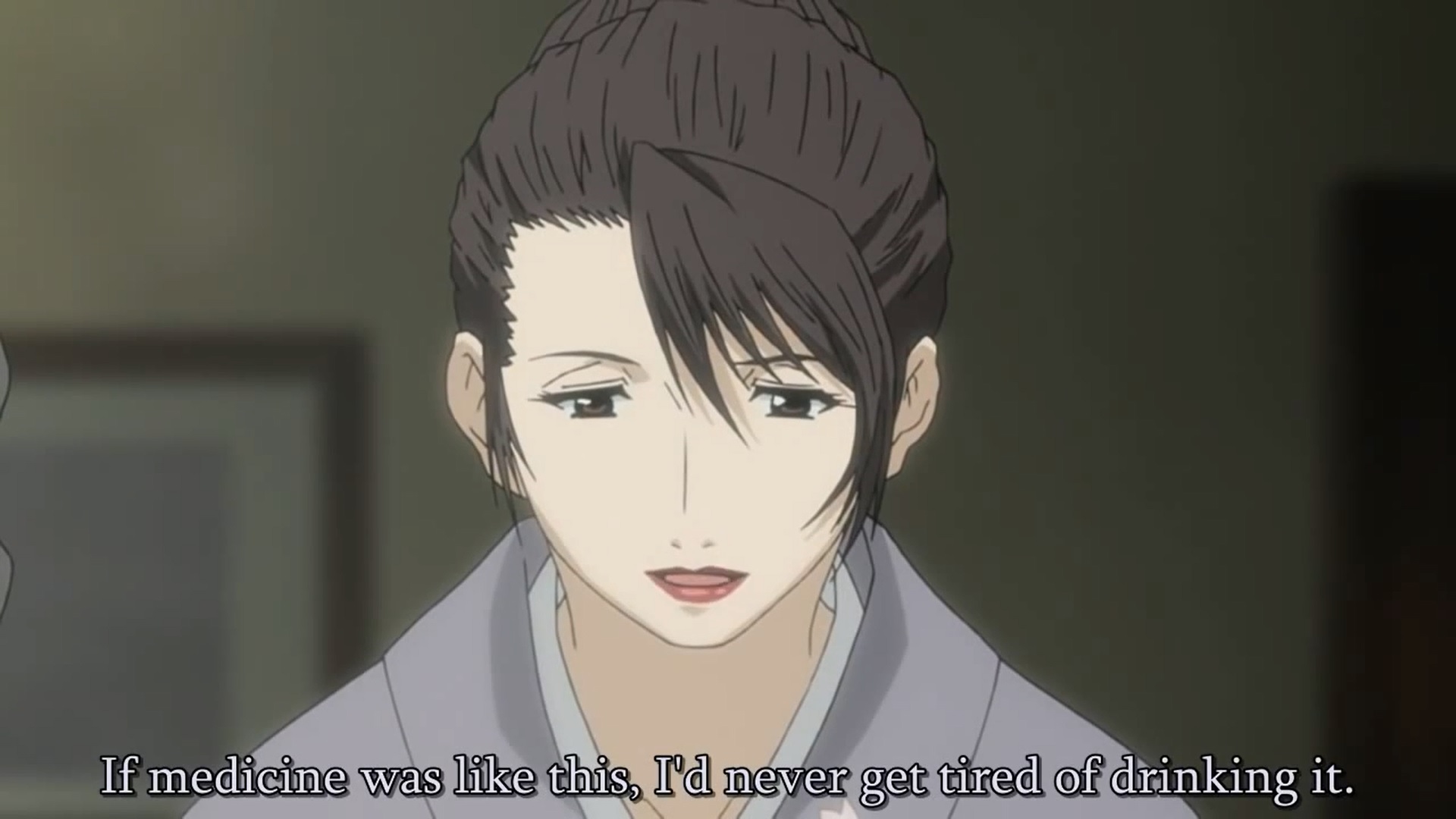 Each of the eleven installments comprising Bartender (2006)—an episodic series directed by Masaki Watanabe and based on seinen manga by Araki Joh and Kenji Nagatomo—showcases a different guest and the specific, hand-crafted cocktail proffered their troubled soul. Contrary to the assumption that alcohol is about losing oneself or actively and repeatedly drowning resurfacing sorrows, Bartender insists the right drink at the right time (“The Glass of the Gods”) is about starting an earnest conversation with oneself. That’s why there’s no printed menu at Eden Hall, the fictional bar tucked away in a corner of Tokyo’s Ginza’s district, only a “menu of the heart.” 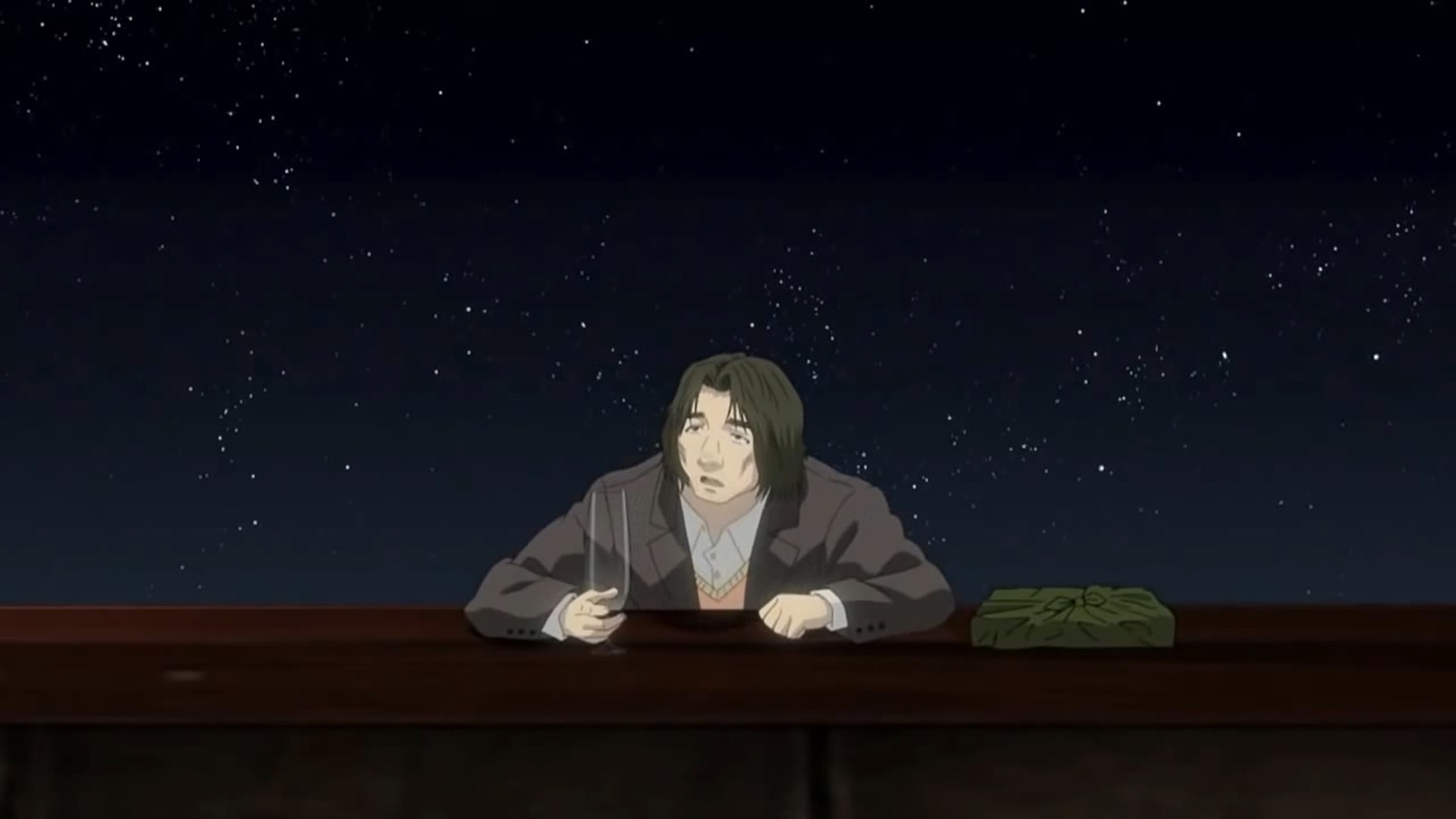 As maudlin as that may sound, that schmaltzy terminology suits the sentiment at Bartender’s core. The series maintains that the most important talent for a bartender is the imagination towards people, the power to create a human story within the glass that opens up each barstool occupant’s heart to introspection. That being the case, there is a lot of pensive rumination—tender, biting, and amusingly awkward—which, through some wonderful storytelling techniques, sneaks up on the viewer very effectively.

Being that this series is all about stories, having the right storyteller is key. The lulling voice of Han Choi as the narrator is that of a parent, sitting beside his child in the still night, reading a tale by the soft glow of a bedside lamp. Choi helps settle viewers into each episode by offering a smattering of history or a brief fact about a particular drink and pops up elsewhere throughout episodes as well. The narrator’s voice is, thankfully, not omnipresent. For the most part, each story is competently told via casual dialog and effective visuals. 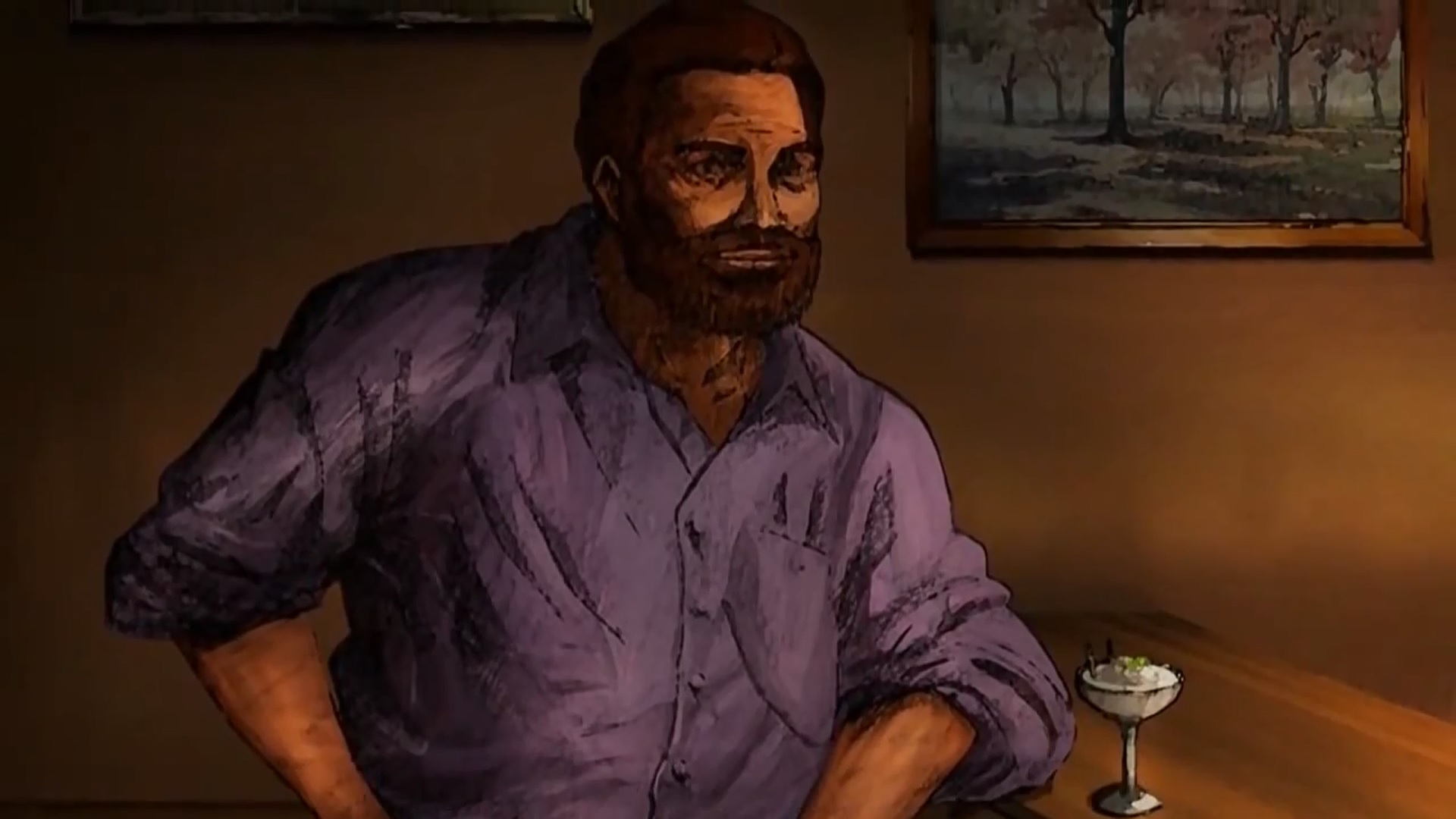 In each tale, wayside details reflect and thereby enhance the emotional impact of the characters’ stories. Bartender is not an imagery-heavy series; character design, specifically facial details/expressions and posture, seamlessly enhance what needs to be said. However, there are particularly strong images, art variations, and camera lens emulation techniques that push particular scenes from dramatic to deliciously melodramatic. (If you don’t tear up in Episode 3 as the billboards silently cheer on Shimaoka, you are, without doubt, a monster ... or sober.)

What is animated is not always the most impressive aspect of what is on screen. Dramatic staging also plays a very important role in setting tone and making people talking at length as consistently interesting as it is throughout this series. And when I say staging, I mean staging. Sporadic instances, such as spotlighting characters giving monologs as well as half-screens split between storyteller and depicted story, lend to theatrical levels of presentation. This might seem over-the-top and included for its own sake, but considering that the lay of wood between bartender Ryuu Sasakura and the customer is referred to as “the tiny stage that is the counter,” I think the execution aptly employed. 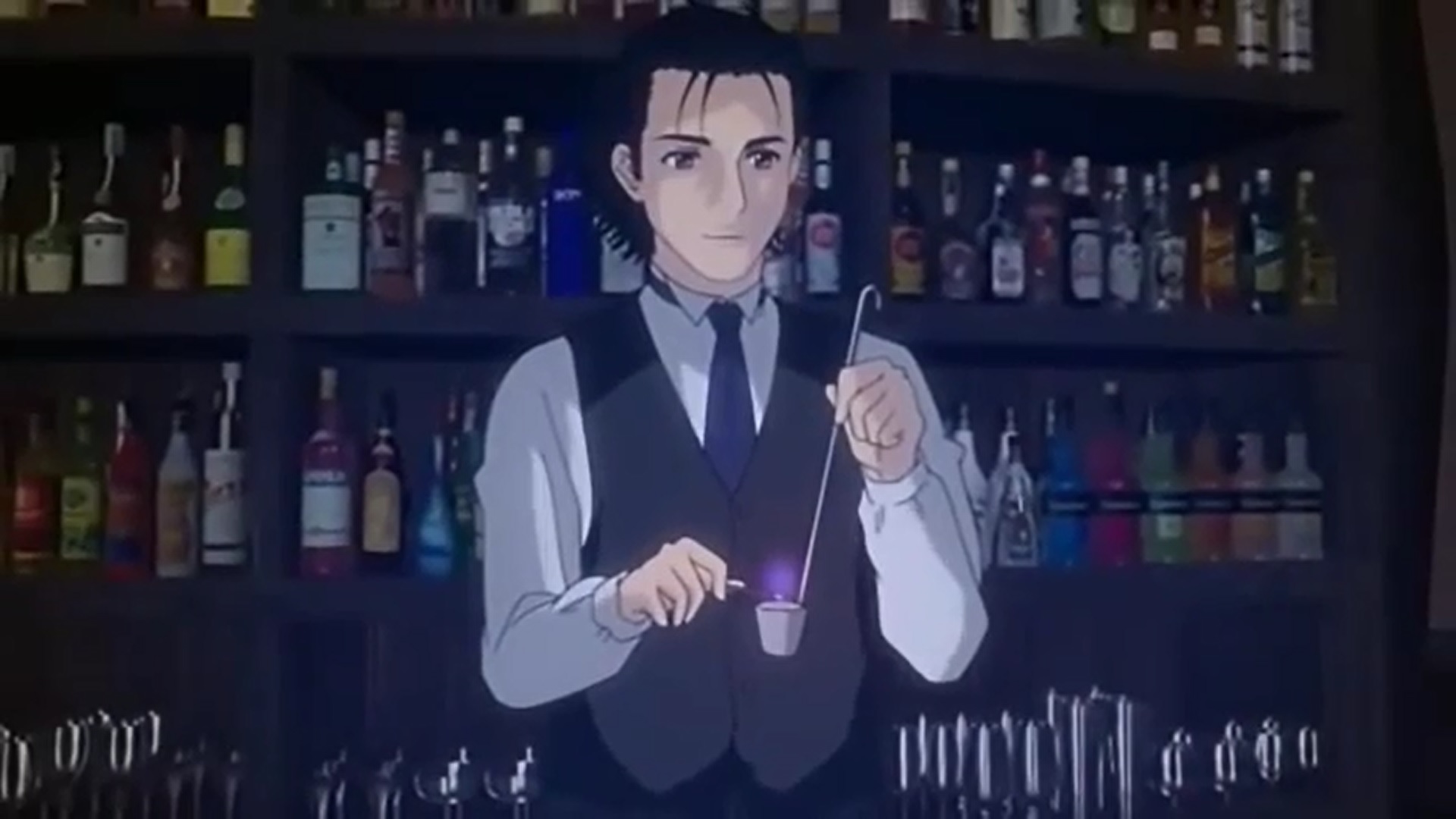 Balance is crucial to any drama, and Sasakura’s manner provides respite for viewers just as he does his fictional customers. Similarly, cameo appearances of regular Eden Hall patrons as part of the frame story for other patrons’ stories convey an unspoken camaraderie while also offering a bit of levity. While not always comical, sage advice and friendly, familiar, alleviated faces brighten scenes just when needed without being too pronounced as to take over the scene. 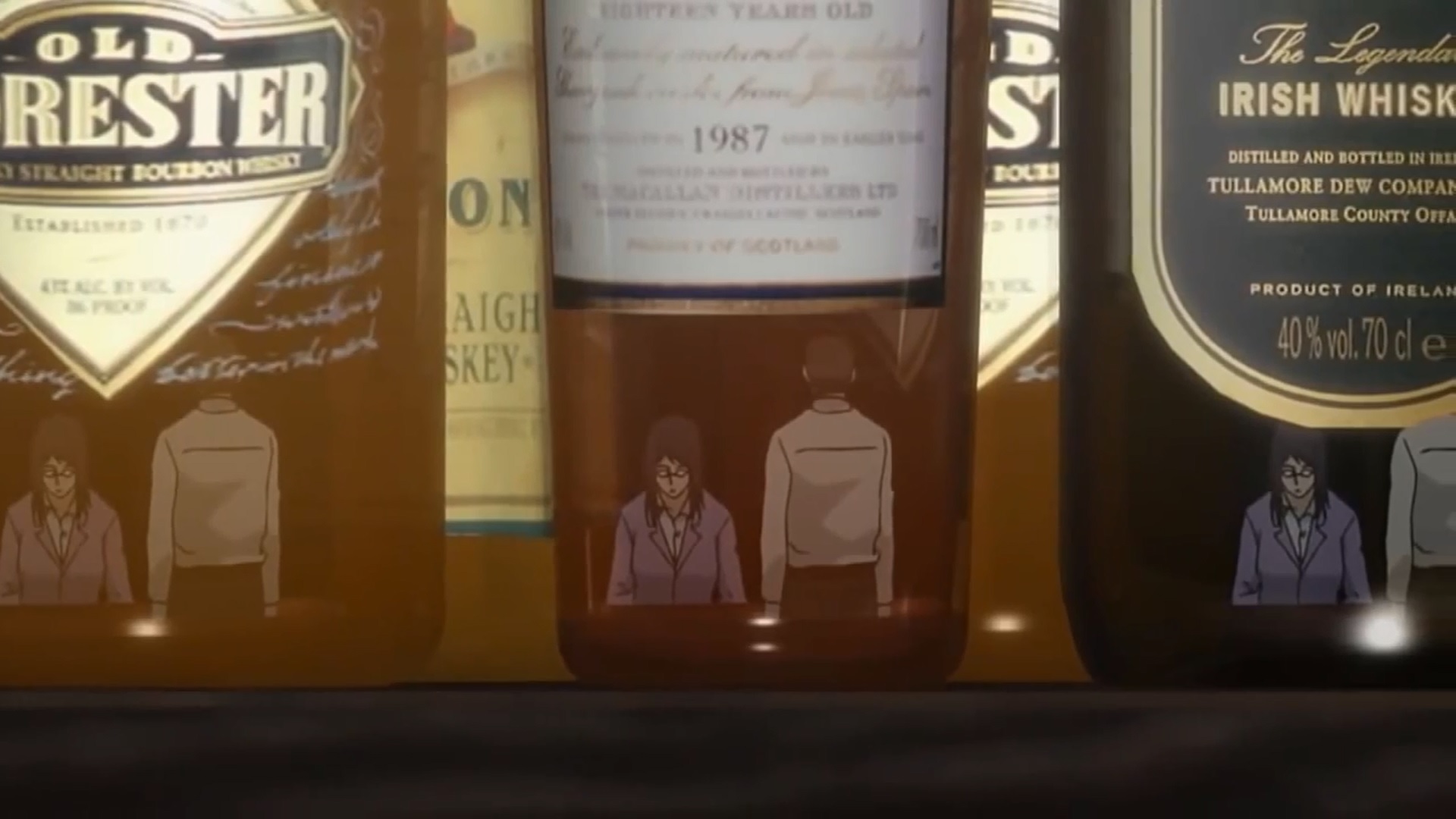 Aside from Sasakura’s gentlemanly smoothness, there is zero fan service here … unless you count the loving rendering of the myriad bottles behind the counter. Those familiar with bars or the shelves of their local liquor stores will recognize at least something readily on hand at Eden Hall. Such is the detail given even in wide shots. Bottle close-ups border on the photorealistic depictions present in Drops of God but with less frequency.  This further installs Bartender as a love letter to liquor as opposed to the consumption thereof. In this series, the stories of the customers are sometimes, if not almost always, as important as and at times even parallel to the history of the liquors imbibed.

Eden Hall, the fictional bar, takes its name from a fairy tale about a glass which must never be broken lest happiness be lost. Adopted by the bar, this mantra is bolstered by the show’s etymology for the word bartender: a gentle (tender) perch (bar). Altogether, these elements astutely imply the fragility of the customers as well as their delicate relationship of trust with the bartender. While this is immediately recognizable as pure fantasy by those who flock to bars in their later years to be somewhere that’s not the oppressive environment of home or work, the depiction of a kindly ear and effective, tasty remedies for daily woes is a welcome fairy tale.

My inner alcoholic is screaming, “Why didn’t this ever get licensed in North America?!” But with the series being seinen and sappy in 2006, I guess I know why. In time, hopefully Crunchyroll will come to its senses and offer it as a legal stream. Until then, the series is available with fansubs on YouTube. It’s a title that can be picked up at any time, alone or with friends, for a random episode, and I highly recommend doing so. 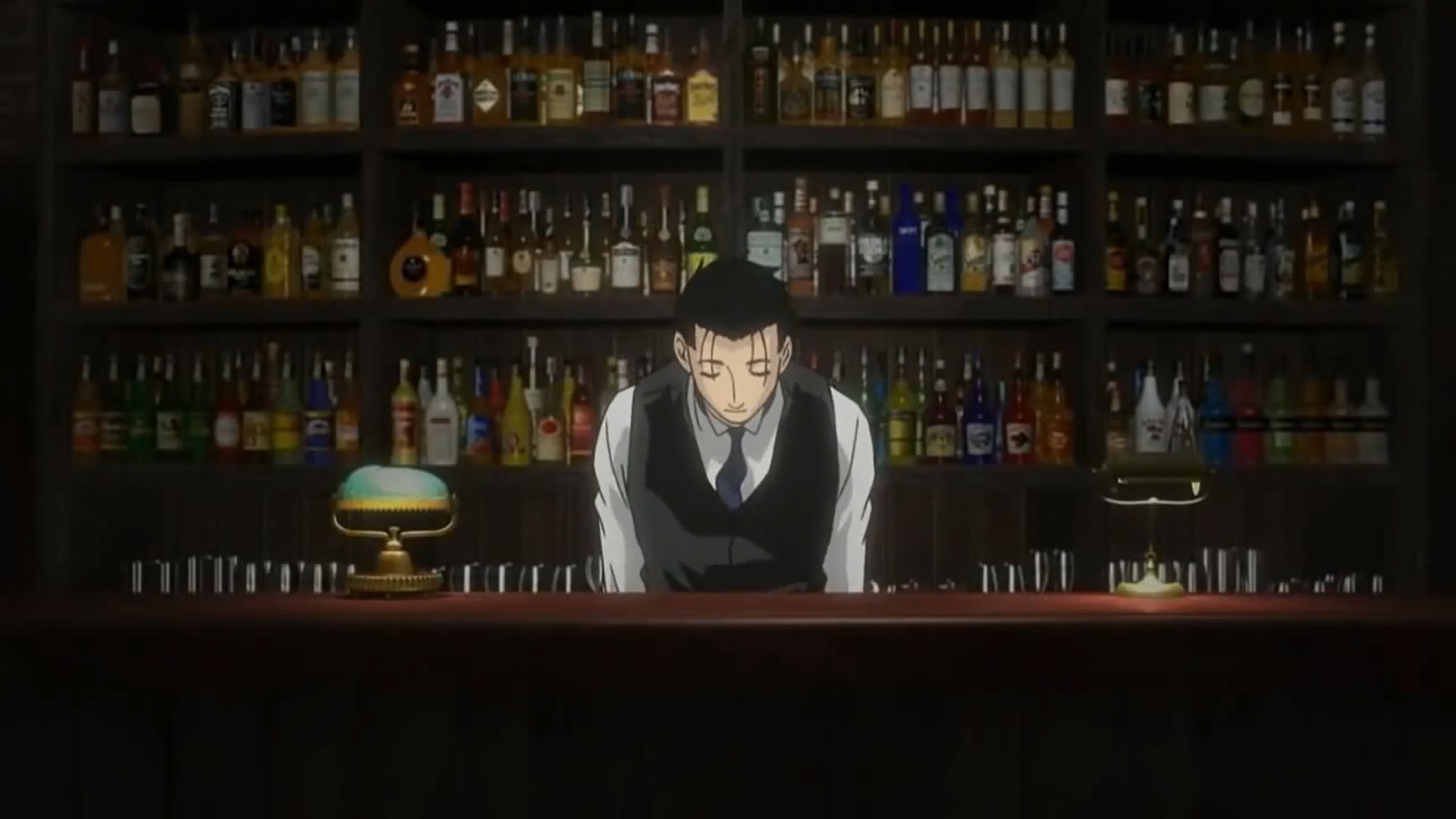