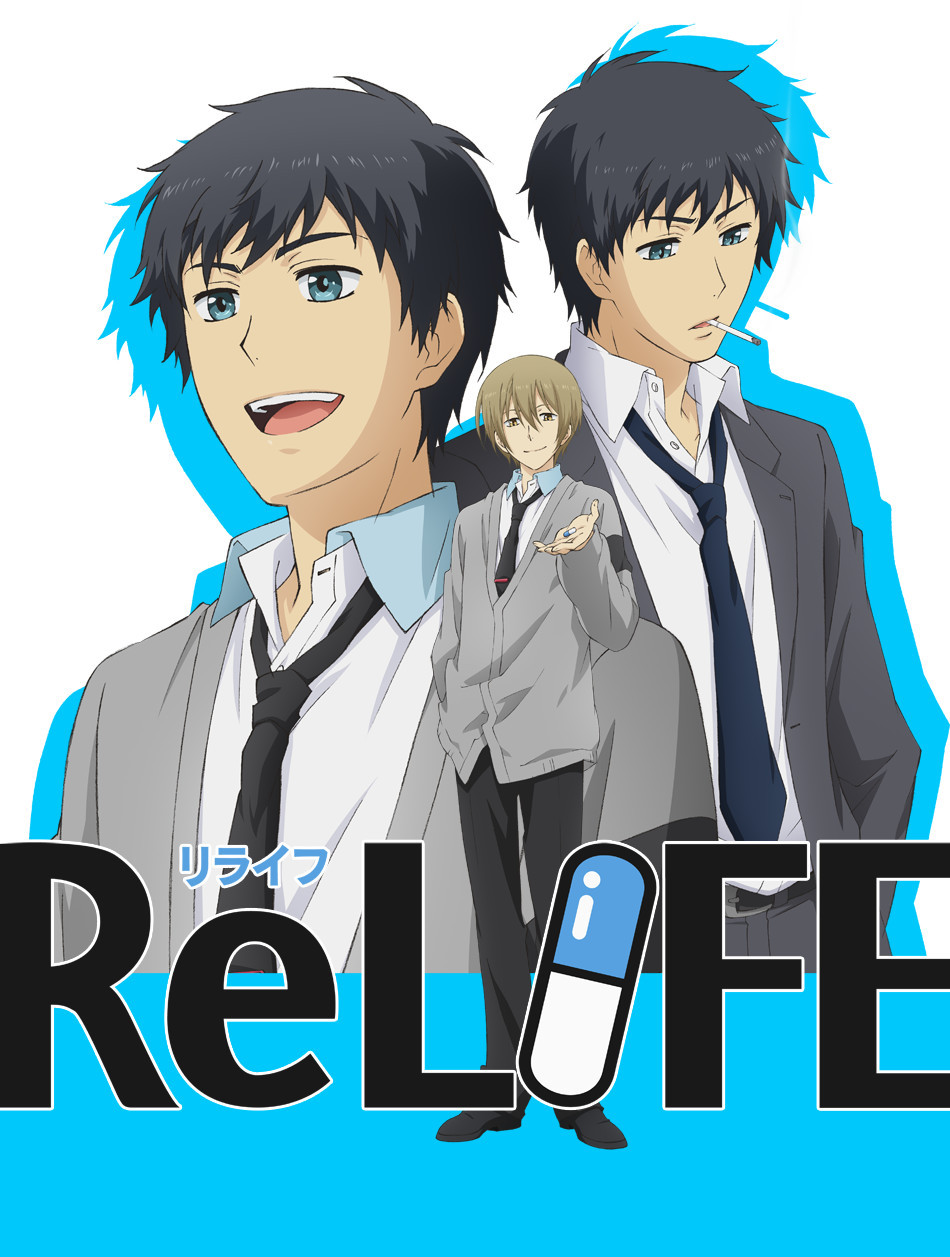 ReLIFE is based on the comico web manga by Yayoiso and animated by TMS Entertainment, which is known for Yowamushi Pedal, Detective Conan, as well as currently airing series Orange. Kaizaki Arata, a 27-year old dropout of society lives a lie, pretending to still be at his sales job and going out for post-work drinks with his friends. In reality, he’s scraping by with part-time work and help from his parents…until the night his mother calls to tell him he’s cut off. Having hit rock bottom, Arata wonders what he’ll do. Then he’s approached by a stranger with an even stranger proposition: to go back to high school with the help of an age-reversing pill. At the end of one year, he’ll have a job. Sounds easy, right?

I’m a fan of the manga (also on Crunchyroll) and have wondered how well this second chance story would adapt to animation. I’m happy to say I wasn’t disappointed. Far from it infact. TMS does a great job of adding texture to the rather flat character designs of the source material. The show has a strong lead voice actor in Kensho “Kuroko” Ono, and he’s supported by a strong cast, including Ai Kayano (Chizuru Hishiro), Ryohei Kimura (Ryo Yoake), and Haruka Tomatsu (Rena Kariu). In a brilliant touch, an assortment of '90s era J-rock ending themes succeed in taking fans of a certain age (like me) back to their own high school days. All 13 episodes of ReLIFE are available for Netflix-style viewing if you find yourself hooked. I highly recommend checking it out. 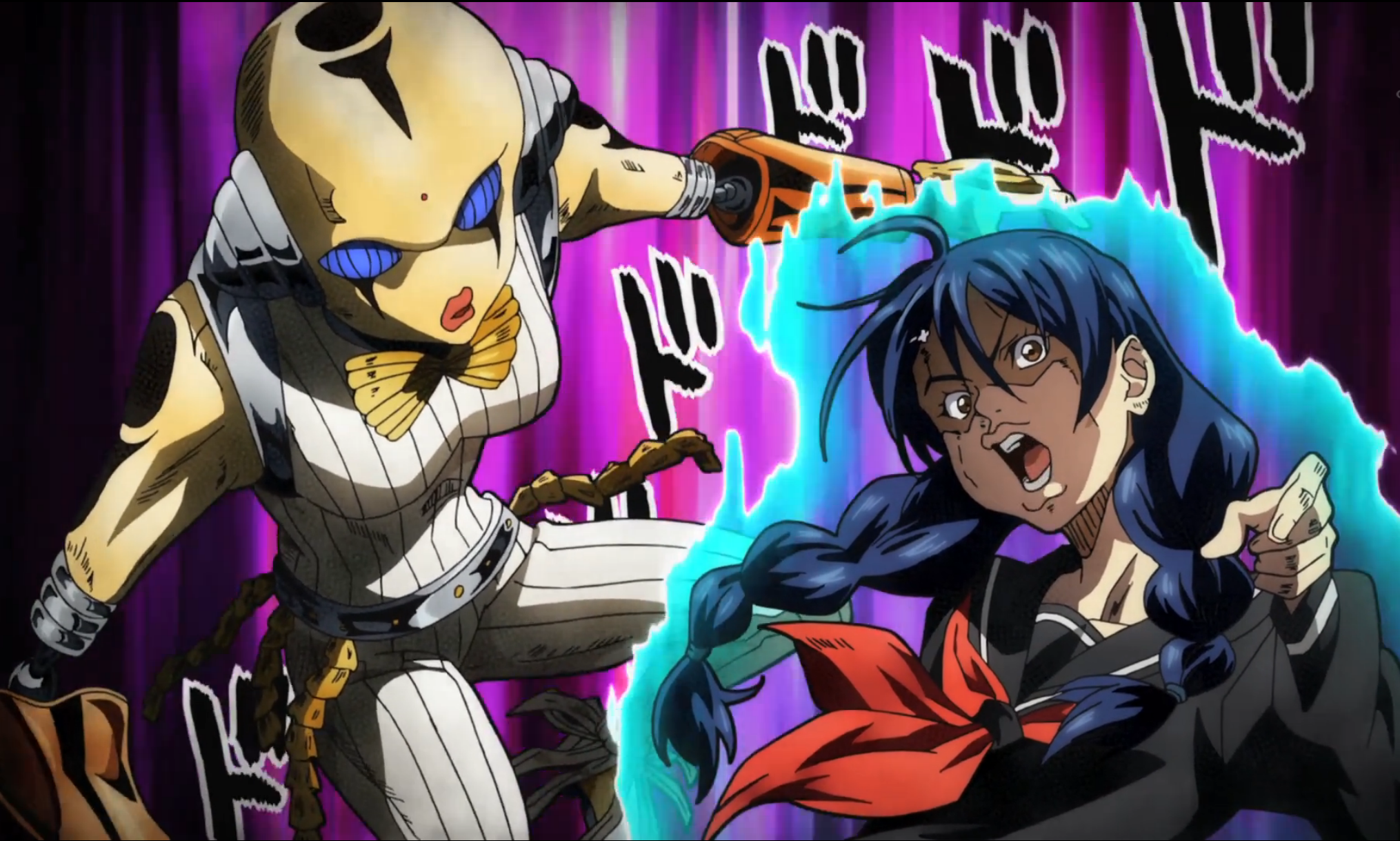 If you missed people having their clothes blasted off by food, you’re in luck! Food Wars returns and picks up right where it left off: the Autumn Elections tournament. Unlike last season, where matchups took multiple episodes to finish, this season seems almost desperate to get past this story arc and jump to the next one. The show has been moving uncomfortably fast, especially given how the show likes to build up tension. The first season made frequent use of a classic shonen battle device: building up a competitor to seem formidable one week only for them to be undone the next. The current pace stumbles through story beats so fast there’s little time to establish any tension at all. It’s almost as if they’ve forgotten that good action, like good food, needs to simmer before it’s served.

As in the first season, JC Staff renders Shun Saeki’s character designs almost reverently to the screen. In particular, I have to give the animation team props for the fantastic shift in style used to portray a food battle in the second episode. Trust me, you’ll know it when you see it, and it’s pretty great. The trio of Yoshitsugu Masaoka (Yukihira Soma), Minami Takahashi (Megumi Tadakoro), and Risa Taneda (Erina Nakiri) return to deliver solid performances, and I’ve always thought Food Wars does a great job in particular of matching voice talent to the outsized personalities found in the source material. From a technical standpoint, this second season has been solid, but I’m not sure if I’m sticking around for another course if the show maintains its frenzied pace. 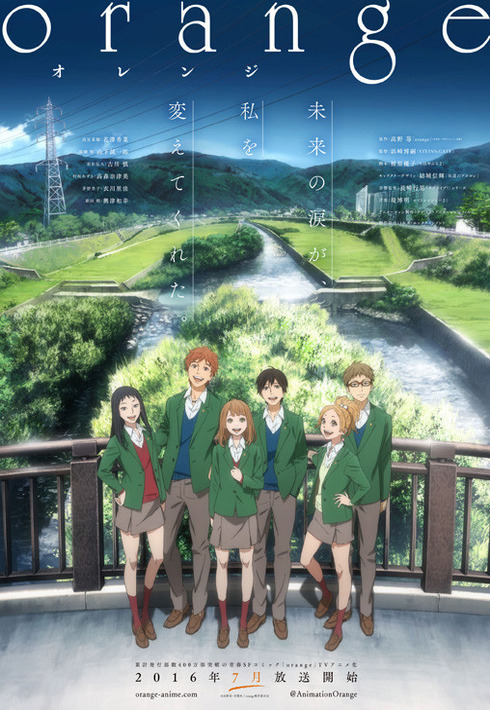 High school student Naho Takamiya receives a letter from herself from ten years in the future. The letter accurately predicts exactly how her day will go, particularly where a transfer student by the name of Kakeru is involved. Future Naho wrote the letter in the hope that her younger self wouldn’t make the same mistakes she did. In particular, future Naho regrets how her relationship with Kakeru unfolded and wants past Naho to watch over him. High school Naho begins taking the advice in the letters with unforeseen results.

Orange is based on the celebrated manga by Ichigo Takano, which is currently available in its entirety (digitally) on Crunchyroll as well as in omnibus format by 7th Seas. As you may have guessed from the description, this is a show that will hit you in the feels. Veteran director Hiroshi Hamasaki leads this Telecom Animation Film (Lupin III 2015) effort and does a masterful job of not only faithfully adapting the look and feel of the manga but imbuing a sense of carefree youthfulness into the interactions of the main cast that heightens the impact of the deeper themes of the story. (By the way, Hamasaki worked on both Red Bullet Zillion and the original Macross, making him a hero in the author’s opinion…despite directing Blade & Soul.) I’ve read the whole story of Orange and recommend not only it but also this fantastic adaptation. 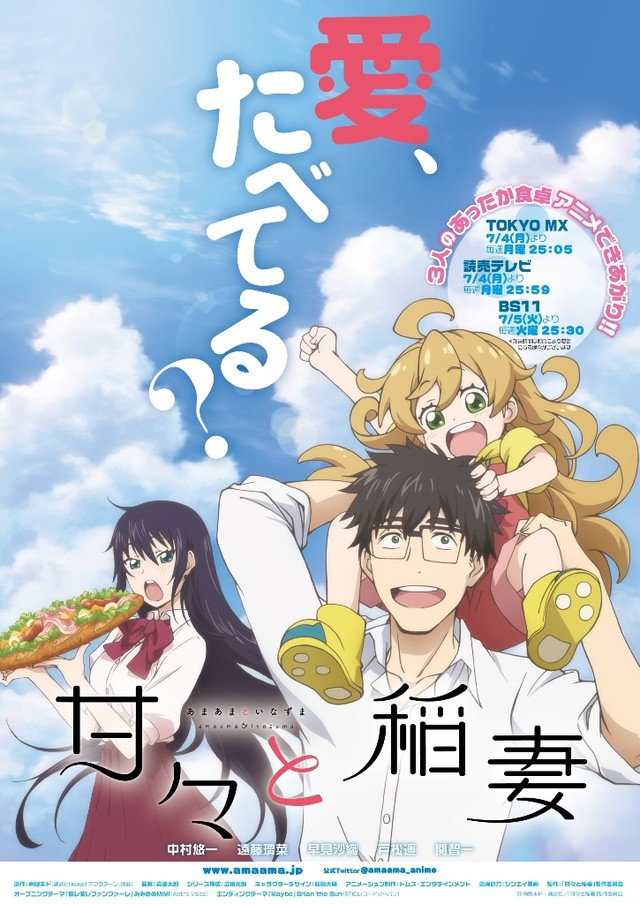 Unlike ReLife or Orange, Sweetness and Lightning is based on a manga I haven’t already read. But that’s OK; I want to feed the adorable and moving show tasty food every day. By the way, that's exactly what the show is about. Kouhei Inuzuka, a working dad and widower, gets by feeding his young daughter, Tsugumi, convenience store takeout while balancing career and domestic life. After a chance encounter with a girl eating a homemade bento in a park, Kouhei notices Tsugumi seems to crave food like his late wife used to make. Events unfold that lead to Kouhei and Tsugumi learning how to cook along with the girl from the park…who happens to be a student at the high school where Kouhei works. Sweetness and Lightning immediately shows, in the first episode, the plight of a single father who desperately wants to provide a good life for his daughter without overstating such. The emotional hook, while strong, finds its counterbalance in the whirlwind energy of Tsumugi, played brilliantly by young voice actor Rina Endou. This is another show ably animated by TMS Entertainment, which seems to be animating quite a few shows this season. If you’re looking for a food-centric show where people’s clothes aren’t being blown off, or something a little more on the slice-of-life side, then this show should fit the bill. I’m interested to see where this one goes. 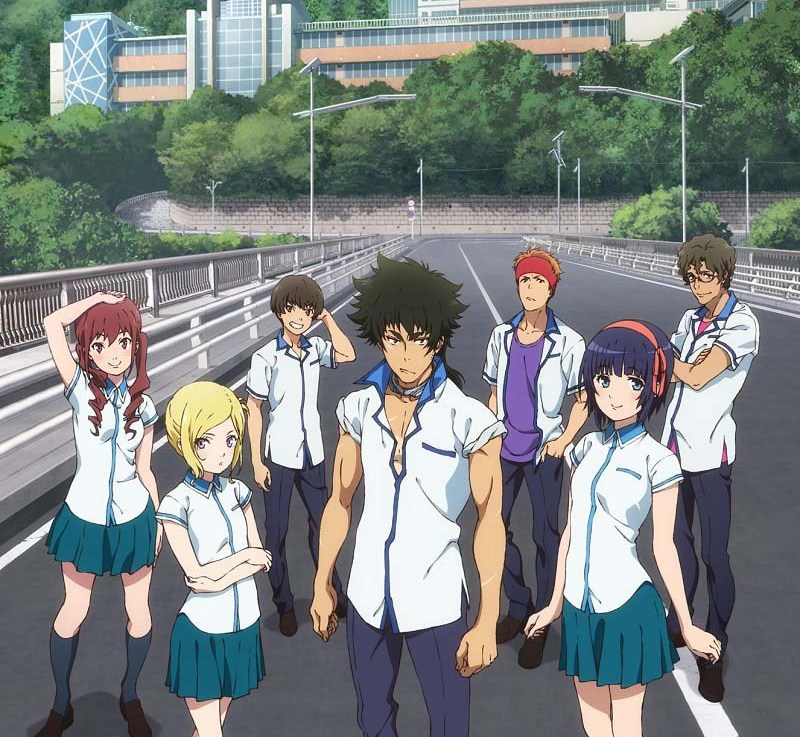 The P.A. Works 15th anniversary production from veteran director Tensai Okamura (Blue Exorcist, Wolf’s Rain) finally hit Netflix recently, and though it technically aired in Japan in spring, I wanted to cover it since we’re just now able to see it in the U.S. I’ve had my eye on Kuromukuro for a while, because it's an original work, a mecha work no less, from a studio that hasn’t really done anything like it in the past. The end result, however, isn’t terribly original. A samurai emerges from a black box after being in a state of suspended animation for 450 years and encounters a teenage girl who looks exactly like the princess he protectezzzzz…zzzz…oh.  Right. I’m three episodes in, and while there have been some good moments, all of the story beats could have been done in one episode. It could be that all of the info dumping will pay off later, but I would rather see this streamlined. It also looks like we’re probably headed for high school hijinks despite successfully avoiding that well-worn trope for the initial story arc. Sigh.

Don’t get me wrong, P.A. Works does a beautiful job with the production. I’ve always loved their backgrounds and design sense, and I think they’ve done a pretty good job with this show in those areas. I’m particularly impressed with the lifelike way the mecha seem to move — to the point where I think maybe they used motion capture on some scenes. But as far as stand-out parts, that’s about it for me. I will stick with it, because I tend to do that with mecha shows in the vain hope another generation-defining show will blow me away. But if you’re not weird like me, don’t rush to watch this anytime soon. 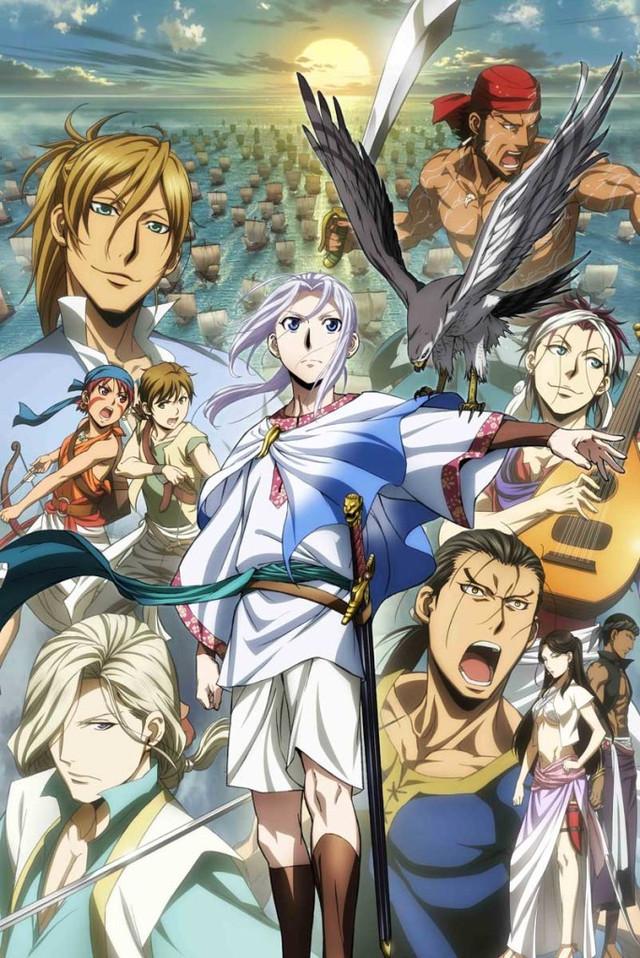 Arslan and his epic band of followers have returned in this sequel to last year’s lukewarm first season. The first season finished as the show was finding its feet, and so far it seems like the second season will build on that momentum. Having begun his campaign to reclaim Pars by sacking the Keep of St. Emmanuel, Crown Prince Arslan finds himself having to return to Peshawar Fortress to repel a new force of invaders: the Kingdom of Turan. Meanwhile, King Andragoras makes a bold escape from Ecbatana’s dungeons and arrives at Peshawar to reclaim his hold on power. “Shockingly,” he effectively banishes Arslan until he can muster an army of 50,000 men to help retake the kingdom. Arslan’s most loyal retainers choose to abandon Andragoras to follow their chosen leader, setting up events for a potential three-way struggle for the throne of Pars.

This second season has gotten off to a much stronger start than the first, but I don’t know if I’d recommend Arslan to everyone. The tone of the show, from the dialog to the massive and occasionally awkward-looking CG army bits, make the show feel like something you’d see on History Channel back when they actually showed history-focused programming. Having been freed from setting up all the characters, a task undertaken by the first half of the first season, the second season begins to explore the motivations of said characters…notably Arslan’s nemesis, Hermes. If you love epic fantasies or sweeping historical fare, you may want to give Arslan another shot.