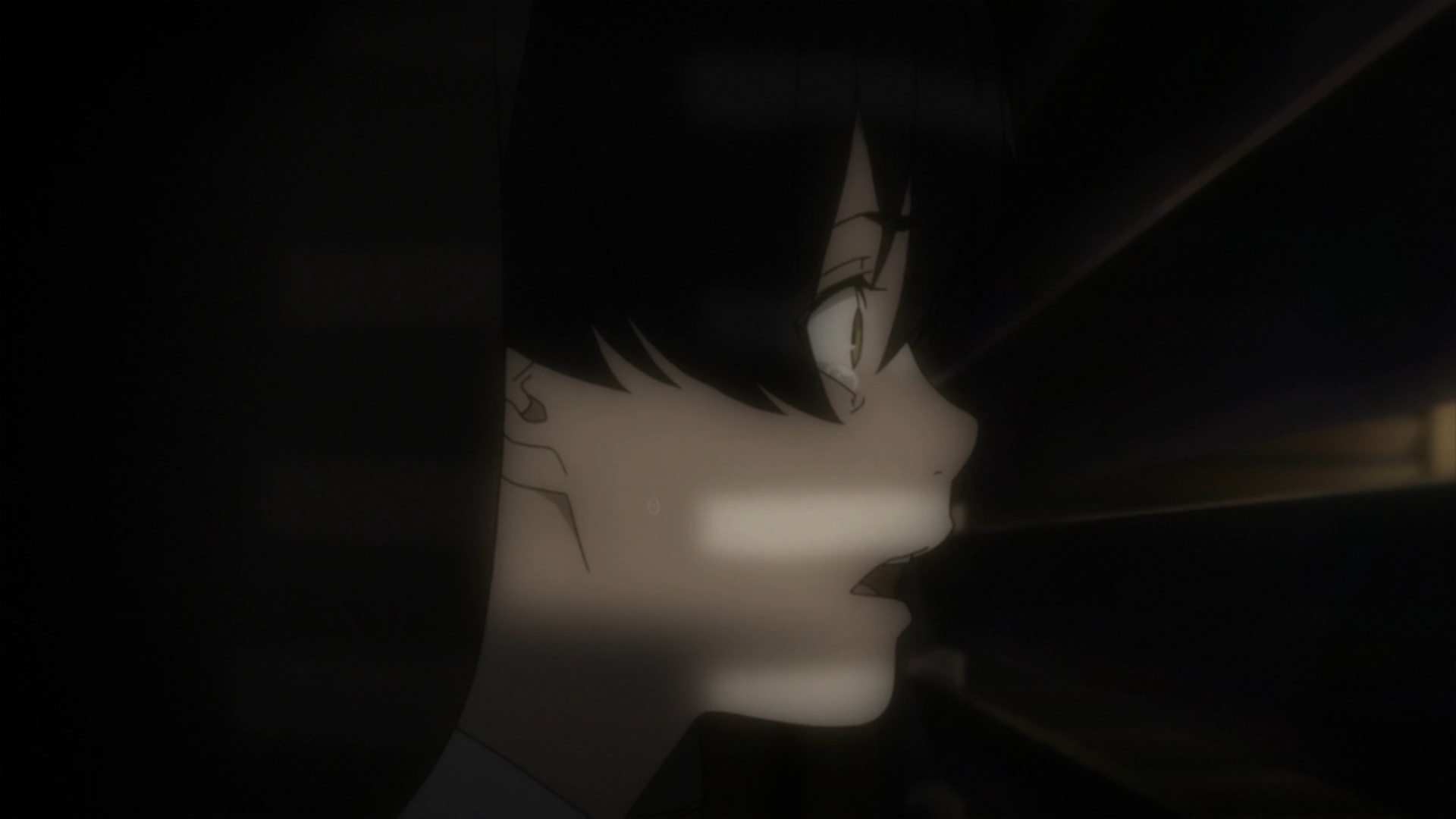 In the USA, strong booze and bad beer were direct results of prohibition. That horrible era can now also be thanked, with sincerity or facetiousness to be determined, for inspiring Taku Kishimoto’s penning of 91 Days. In this prohibition era tale, a boy sees his mob-involved family murdered by other mobsters and grows up seeking revenge...while making the best booze. Kishimoto was also responsible for composing Bunny Drop and Erased, so I have strong faith in him fully fleshing out these original characters with great humanity…even if, so far, they all act like syncretic stereotypes. Schmaltz, it’s an important ingredient in the distilling process.

The first episode of 91 Days, which is still my favorite, is over before you know it, and each of the three episodes thus far just beg the next episode to arrive early. The action’s of a quiet intensity, except when it’s not, and both (as well as casual character interactions) sweep me right along. The only qualm I really have with the series so far is distinguishing the characters visually, and I actually mean that as a compliment. That said, animation production is via Shuka, which handled DRRR!! x2. I recall hearing unkind things about the initial animation quality regarding that show (which I did not watch), but so far 91 Days delivers some Bones-style FMA goodness with tone-setting, rich, bright and dark color palates. I’m with this one on an episode-by-episode basis, and the episodes can't come quickly enough! 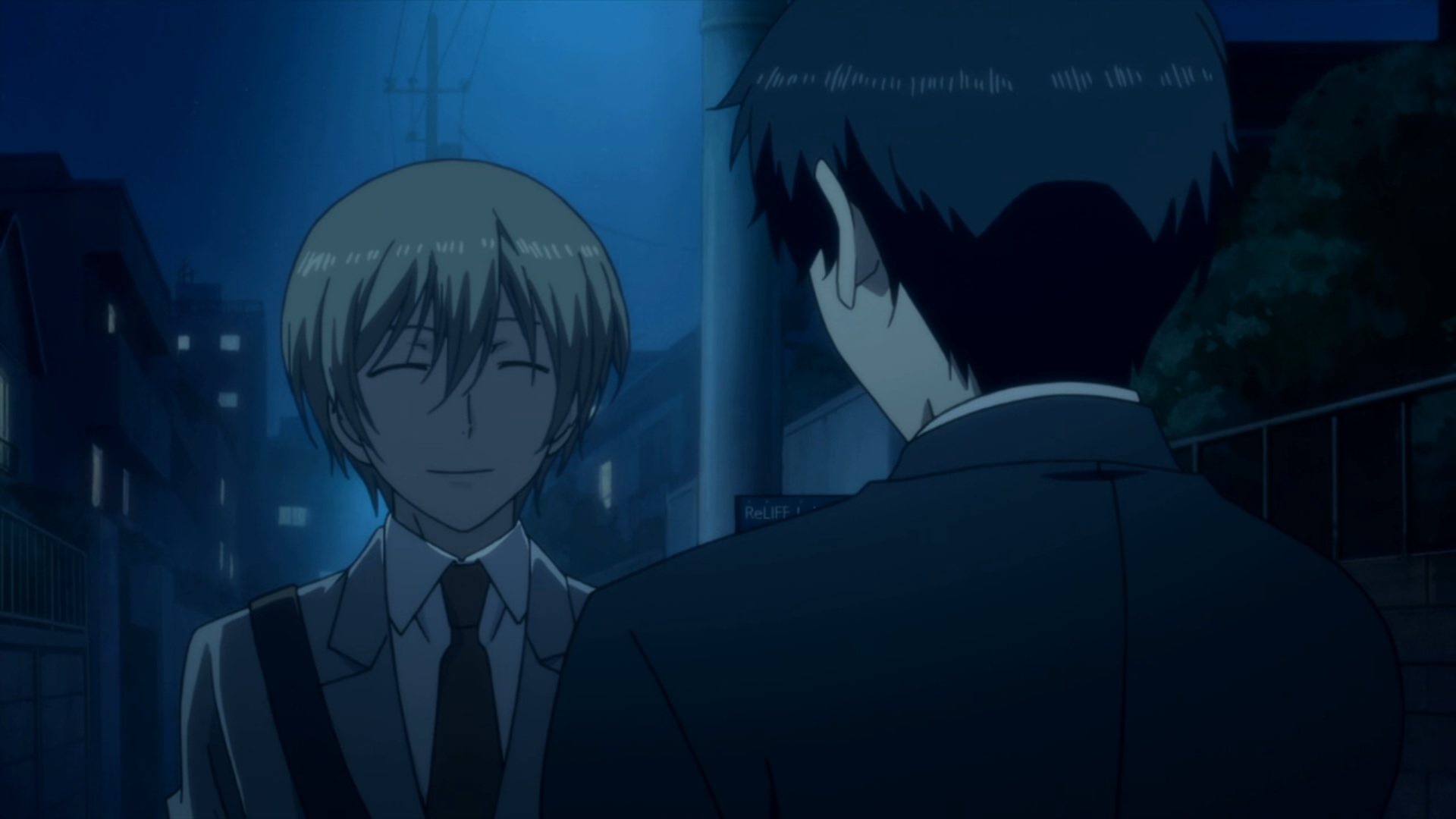 Arata Kaizaki is in his late 20s and has been jobless for some time after quitting a position a mere three months in. His mom cuts off his life support (allowance), and soon thereafter a stranger passing by on the street offers this NEET a choice: paid room and board in exchange for swallowing a pill that will revert Arata’s appearance to that of his teenaged self for one year in hopes of rehabilitation via social reintroduction at the local high school.

Even though there are more than enough NEET/hikikomori anime out there, I find ReLIFE most comparable to Welcome to the NHK in terms of the protagonist’s inner monologues. The desperation and sadness ring true with visuals pertaining to Arata’s particular state of isolation and stagnation, but social anxiety isn’t particularly stressed. And while the concept of a 27-year-old-in-teenager’s-skin lurking in a high school classroom immediately set off my skeevy alarm, the series is at least self-aware enough to address it in a(n arguably inappropriate) humorous light via Arata’s internal monologues. I’m not willing, however, to say this series feels smart enough to justify paralleling those conflicts with the state of Arata’s emotional immaturity. Otherwise, this is basically a comedy, and the characters (all of whom I’m convinced are ReLIFE clients unbeknownst to each other) make some great faces and are written with a chemistry and tropey extremism that make each episode truly enjoyable. The 13-episode series was released in one shot, so binging is entirely possible but watching one episode a week feels about right. 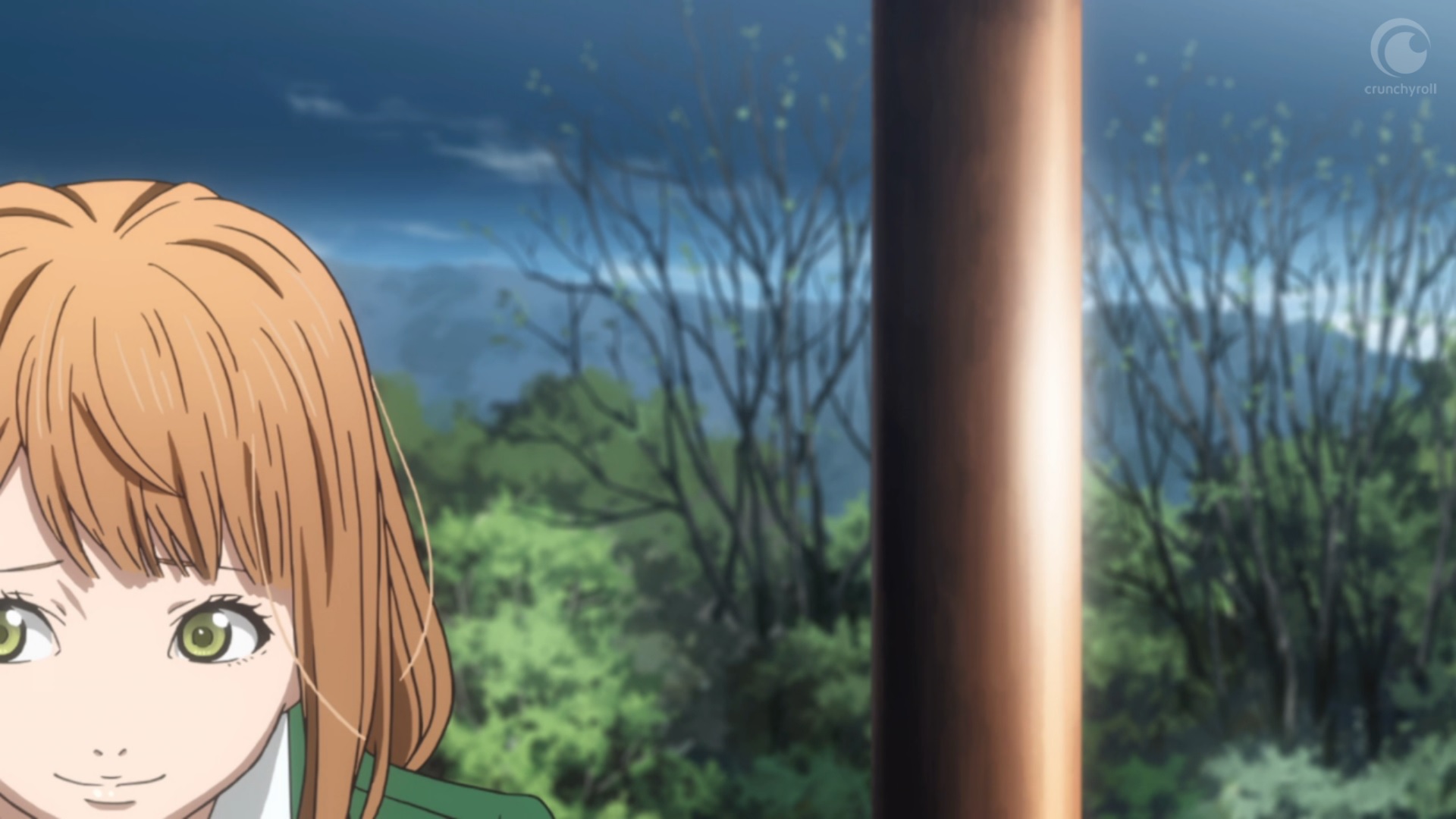 Having heard so much praise for its source material, I was very eager to check out Orange — the story of a 16-year-old girl who receives a letter from herself in the future detailing events she wants changed in order to erase regrets tied to a friend who’s no longer alive. As with any story involving time travel, there are issues to be had. Points of perception and the issue of which timeline the audience is actually being fed can be argued. Because of that, Orange is not above making common mistakes which otherwise mire an interesting premise with amazingly expressive and humanized characters in thoughts about incongruities; flash forwards to Naho’s future self and friends, in what appears to be a static timeline, divert investment in the emotional to a focus on the technical. But that’s the only aspect I’m willing to nitpick. Otherwise, Orange is a phenomenal portrait of the daily lives of high school friends. Their interaction, conversations, and expressions seem the sort plucked directly out of my childhood memories. With regards to the expressions, these are much more than silly faces; every reaction holds the weight of the unsaid. This, and the love triangle(s?), is what’s bringing me and my heart back week after week. 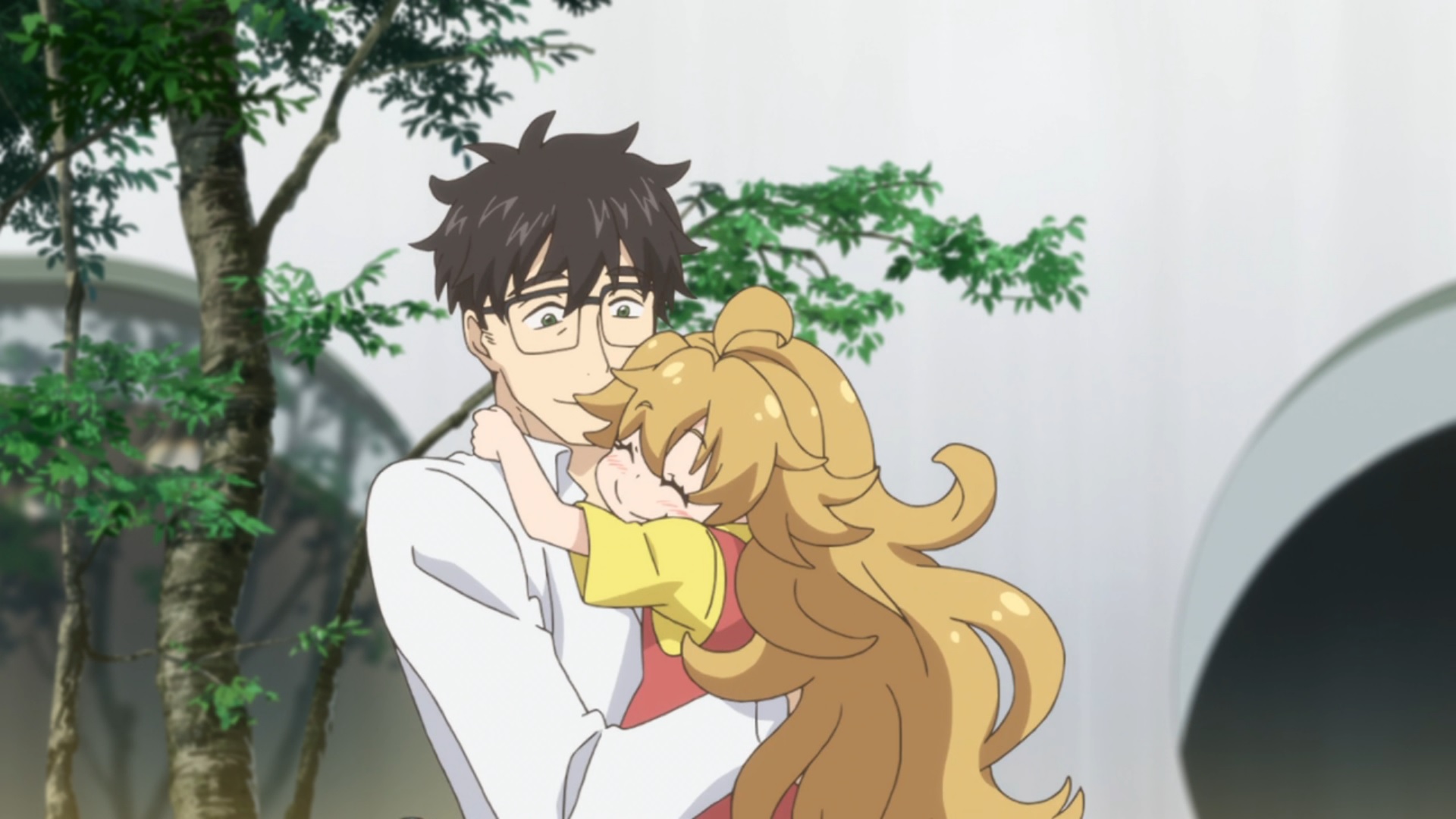 This account of a widower raising his adorable scamp is an utter "aww" fest. Kohei’s brilliant and instinctual sensitivity as a father, contrasted by his hero’s flaw (cooking ineptitude), sets the stage for a play all about making the audience fall in love with the mutual familial adoration between a preschool-aged daughter, Tsumugi, and her father. This father-daughter duo coincidentally ends up spending time with the one of Kohei’s students, the daughter of a famous cook, who (as a foil to her mother) cannot cook due to her fear of kitchen knives. This has been the show so far.

And so far, this series is one of the most unmissable, heartwarming shows of the year. It’s nothing that needs to be marathoned. No real tensions or conflicts exist that beg viewers to watch multiple episodes in sequence other than the seemingly monumental trivialities that make up the daily life of a parent dealing with their child and vice-versa, but watching everything take place is the main attraction here. The actions and reactions and wholly simple premise, for all its silliness, are absolutely perfect for a feel-good anime, and Tsumugi’s character design (specifically her wild mane) immediately portrays the omnidirectional energy of youth. I’m definitely going to finish watching this but with a “when needed” dosage schedule. 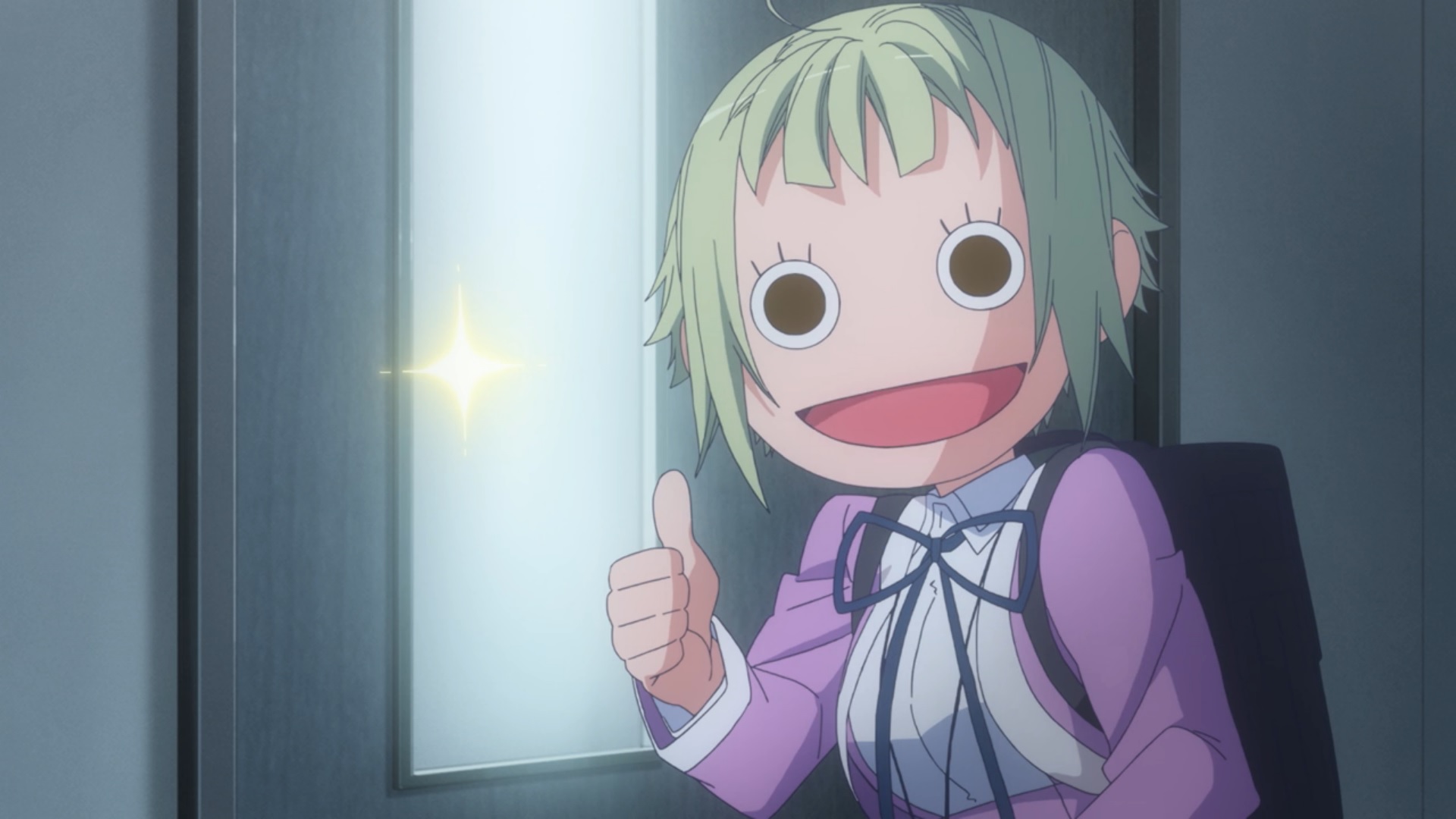 I’d say it’s an anime with a face only a mother could love, but the toggling between regular and superdeformed visages (especially with how creepy the latter are by comparison) is the only reason I’m watching this. Why stopping after a single episode isn’t an option, I cannot say. Every bone in my body wants to stop, and there’s no particular personal draw for me, but this series that expressly deals with one young scuba diver showing a fellow student (a recent transfer) how great scuba diving is is something I keep coming back to. Ok, there’s also an eccentric electricity to the protagonist that’s at once charming and alarming, AND there are character designs which are just shy of a firm cookie cutter press. The latter can be credited to the fact that the anime is based off of the manga drawn by the same manga-ka responsible for the art in Aria. This is a floating anime, another with no particular conflict other than the divide between remaining isolated and passionate investment. The fun should lie in exploring the fascinating aspects of scuba diving, but, so far at least, I’m not being convinced by anything in the show. As of Episode 3, however, it is worth mentioning the show makes good use of the ironclad rule for diving (never stop breathing) as a metaphor for remaining calm under pressure while adapting to a new town and school for the anxiety-riddled transfer student. It's a good and pretty show, but one I might drop on any given whim.

At eighteen years old, protagonist Suzukaze Aoba is fresh out of high school and newly employed as an artist at her dream job: a game company. Aside from this newb, the company is filled with women who are her seniors in differences spanning a few to quite a few years (not to mention game development experience levels), which would be refreshing if they all weren’t drop-in replacements (characteristically and almost visually) for their high school slice-of-life moé counterparts. Well, at least everyone save Aoba is of drinking age, so there are those clichés to exploit, and I’m legally free to call a moé blob my waifu/stand-in after I’ve had more than a few beers. I fear the show is literally a bridge for the older set to legitimize, ultimately in despair over the ironic mirror, fawning over simple characters doing simple things. The representative screen cap, itself a bit of marketing pander from Crunchyroll via their Twitter feed, is exactly why I started watching the show (in addition to the recommendation by a trusted friend). This is a very droppable show that seems to want to be a video game-centric, Shirobako-lite version of Servant x Service. After annihilating a few brain cells with some good brew, however, there’s a lot of simple fun to be had here — both of which are the reasons I'll keep watching.