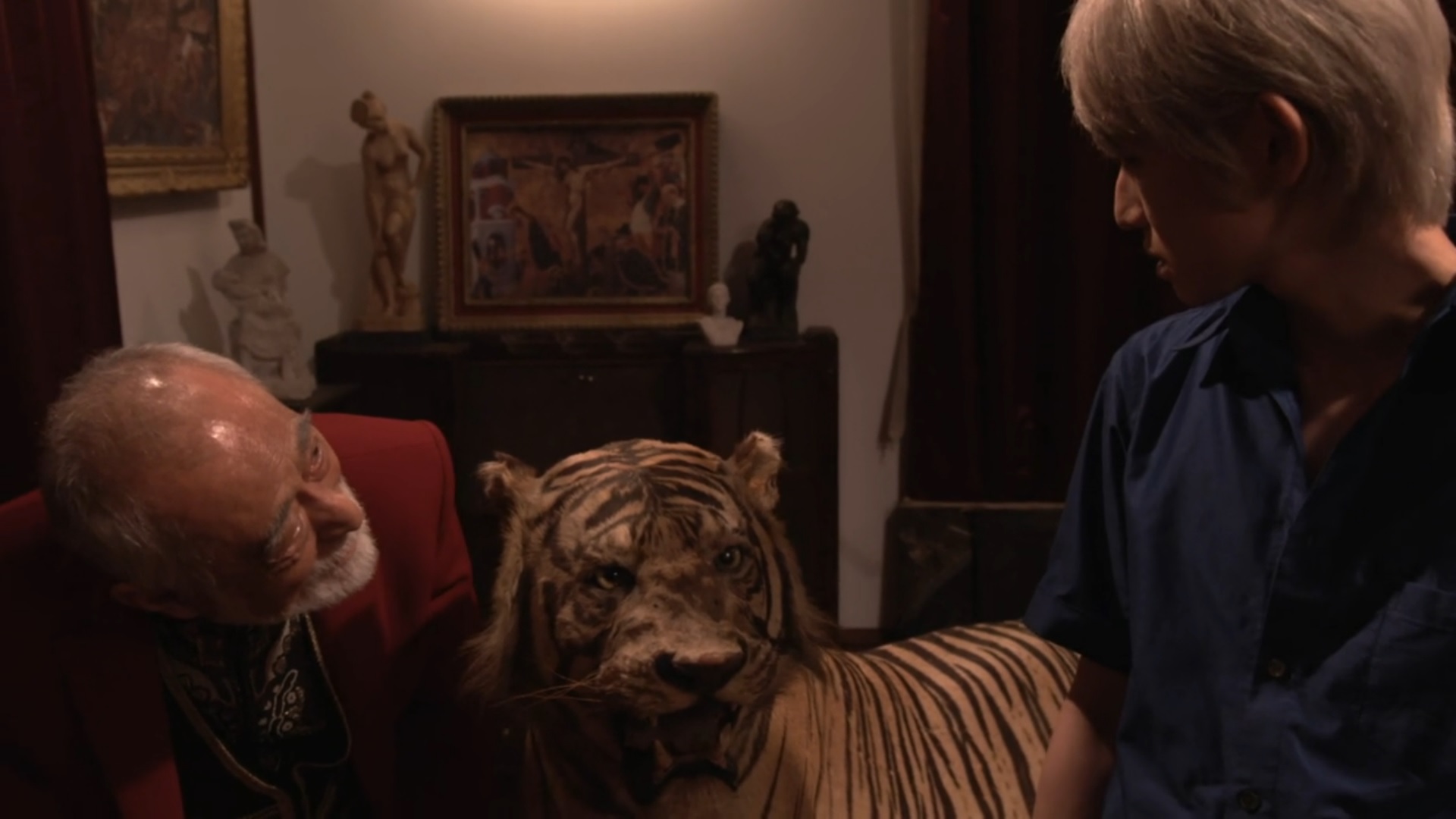 Based on Nobuyuki Fukumoto’s manga of the same name, this live-action drama sure picked one hell of an arc to adapt: the Akagi vs. Washizu mahjong match. Each hour-long episode is chuck full of visualizations of tiles and strategies, explanations of hands, and pondering … lots of pondering. The only drawbacks to not being animated are the lack of Madhouse finesse regarding through-the-floor camera work and the shakiness of whatever handheld camcorder was used to shoot this series. (I seriously felt ill at moments from motion sickness.) Otherwise, the lighting, costumes, staging, sets, and filming all remind me of ’80s soap opera melodrama, which is perfect for a show centered around a competitive game. I also love the soundtrack, which is all over the place from beatnik jazz to Psycho screeching strings backed by Fantasia trumpets, and electric/metal guitar. Masahiko Tsugawa as Washizu is a great choice, pulling off early some of the underlying conceit and madness, while Kanata Hongo as Akagi is appropriately cold if only appearing too young and not reckless/mad genius enough. The latter may be the fault of starting in on this arc instead of taking the time to develop atmosphere and Akagi’s history of derring-do. Oh yeah, I'm watching this. 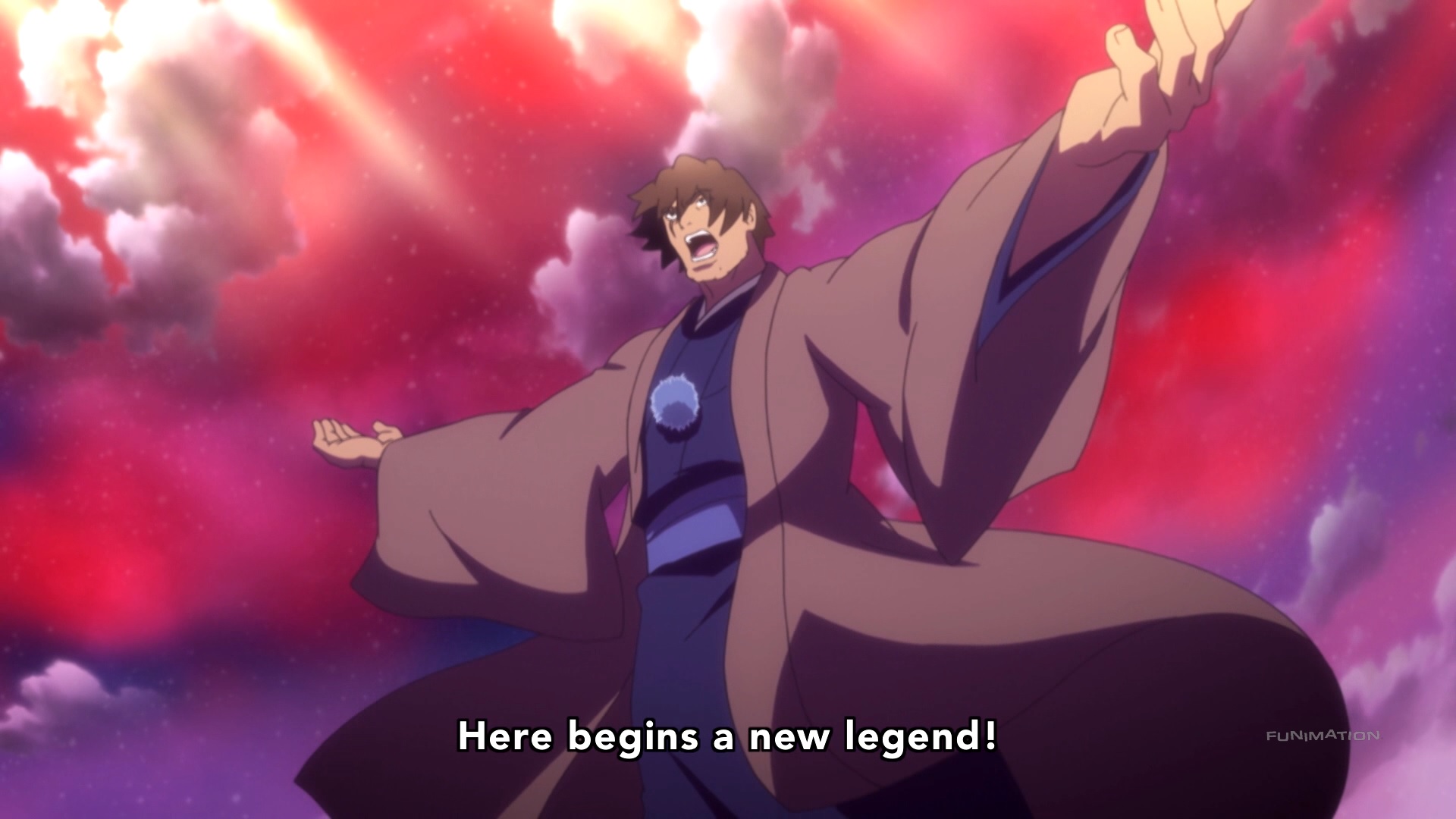 Mechs combining with magical girl-esque pilot transformation sequences and a “was it good for you” afterwards, parallel universe theory, Pokémon-speak mojibake of the week, Wittgensteinian philosophy … what’s not to love in this show where employees at an anime café are actually a super-secret sentai team devoted to saving the world from a madman hell-bent on destroying its language? Well, a lot’s wrong with it actually, but there’s a lot to appreciate as well: mostly the sense of parody that saturates each episode without pointing itself out as such. The series is also melodramatilicious™, which is often part of the parody for its use of over-exaggerated tropes. Most notably, I’d point out the linguistic propaganda focus — kanji that come to life and wreak havoc on the general populace — and how that panders to word nerds like myself. A direct quote from the second episode: “The voice infused with spirit bestows power and meaning upon words. Is this the true power of verbalism?” “Verbalism,” by the way, is how the sentai team fights the word monsters. Think Phantom Tollbooth but with giant CG robots instead of a dog with a clock in its chest. It’s kinda perfect(ly crazy) and very watchable for being so. 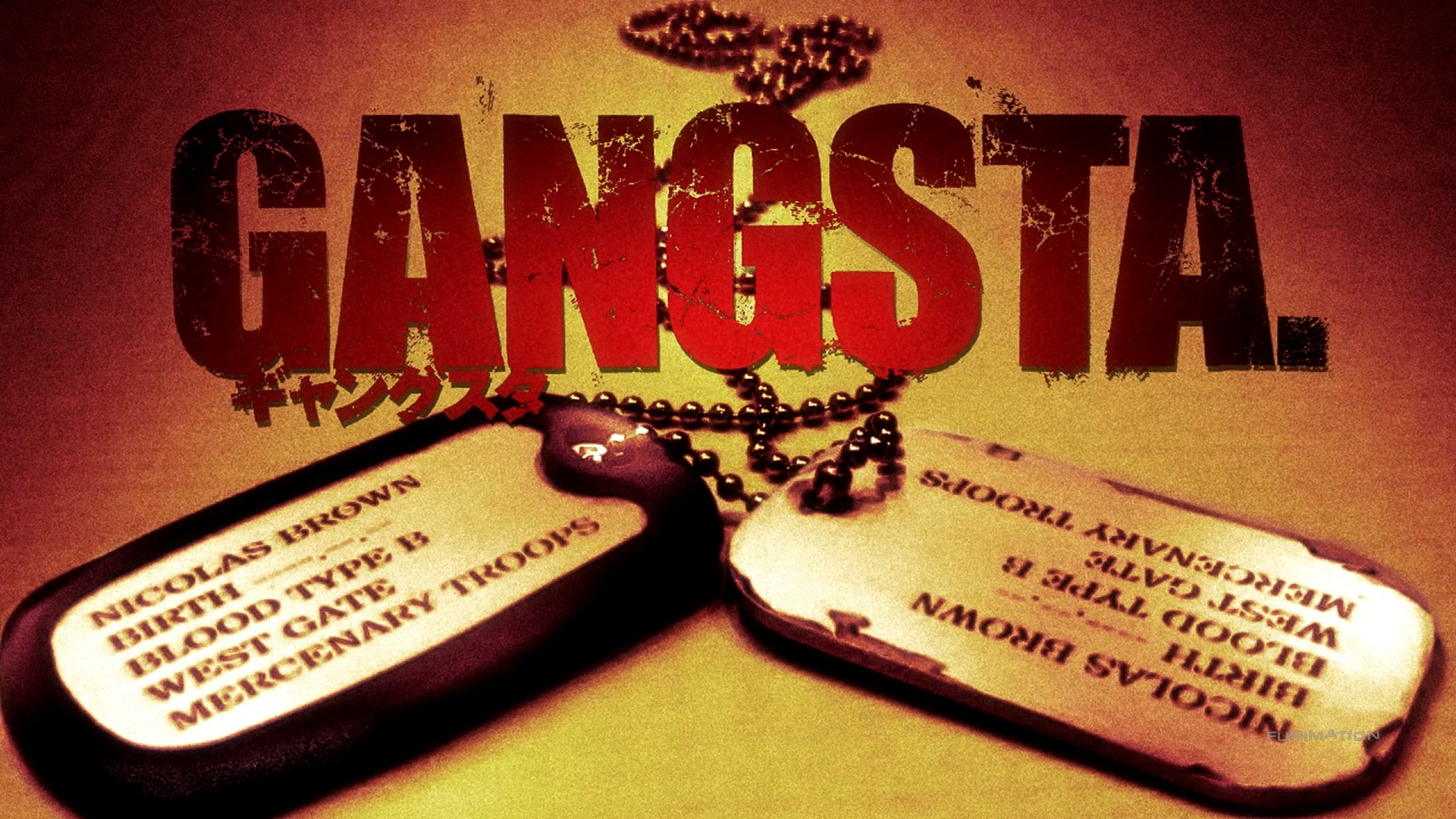 A street action/drama series directed by Ergo Proxy’s Shukou Murase? Sold! Handymen Worick and Nicolas settle disputes, one way or another, for anyone able to pay. Nicholas is a Tag, an ex-military super soldier type, who also happens to be deaf. His partner, Worick, is a gigolo and more adept at the more nuanced aspects of negotiation. While the initial episode hooked me conceptually, it wasn’t until episode 3 that I was hooked visually. That’s a lie, but this series’ sense of style certainly reveals itself little by little. From the camerawork and color palate to the choreography, Gangsta is a stunning watch. The pacing of the storytelling is fluid, gripping, like being swept away by a strong current (whether for action or emotion). As soon as you start watching, the episode seems like it’s over! I’d like to validate claims of grittiness laid by others, but while the toon is violent, hosts some seedy situations, and isn't set in the most wholesome of environments, the streets look far too clean to be Roanapur. I’m in it for the run, and Alex’s white dress has nothing to do with it. 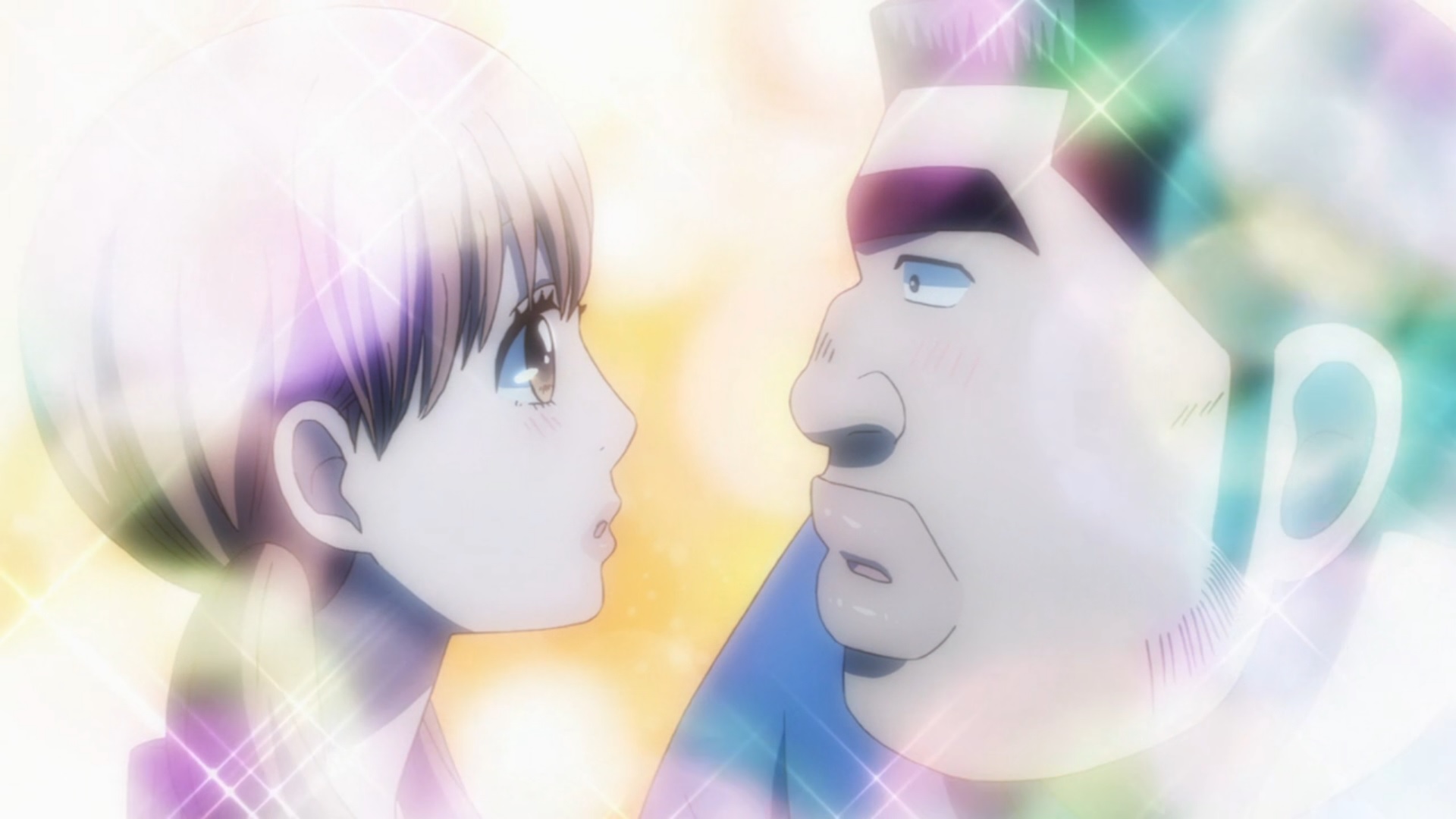 After my previous Three Episode Test entry for this series, I was curious to see how long My Love Story!! (Ore Monogatari!!) could stay fresh and sustain my interest given that each episode is comprised of two people in love getting to know each other better and falling all the more in love for it. Normally, I’d say that’s sickeningly sweet, but for some reason, whether it’s all the laughter stemming from the absurd physical, emotional, and audio contrasts or the awws evoked from how wonderfully the couple’s devotion comes across, week after week makes me grin like an idiot. I really couldn’t ask for more, but this season gave it to me with a renewed focus on what was an ancillary character and a new character. The whole deal still reeks of relentless pandering to those who want to place themselves in the humongous, incorruptible shoes of a modest, patient, even-tempered, invincible misfit, treasured by everyone who gets to know him, and walk a mile in his squeaky clean relationship. But, yeah, I’m up for that. Every. Single. Week. 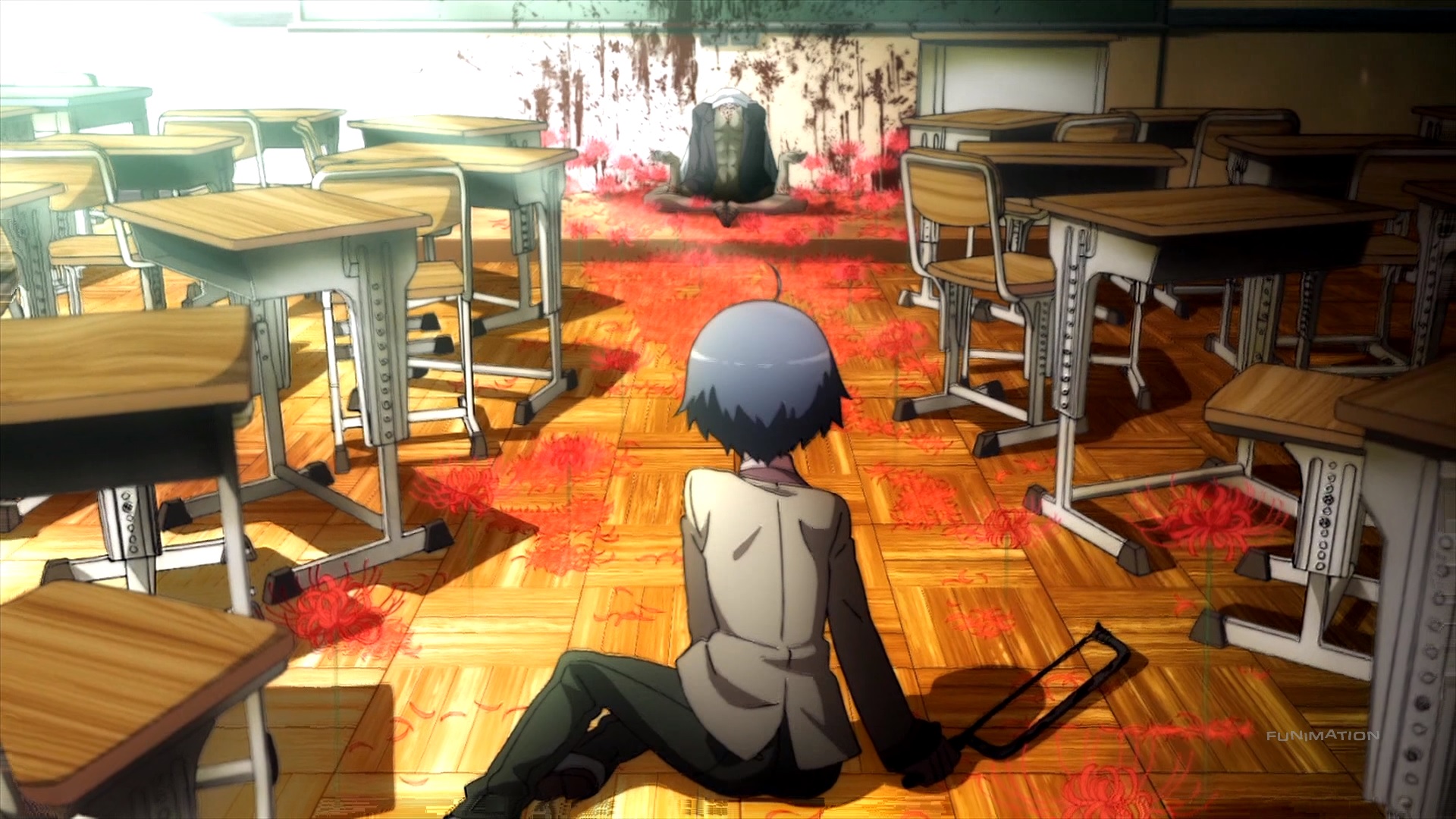 As this season’s noitaminA installment, Rampo Kitan: Game of Laplace frames adapted murder mysteries from acclaimed novelist Rampo Edogawa within the life of a bored young man who excitedly comes to work on cases brought to another bored young man (who happens to also be a super-detective ). The first episode nicely contextualizes the main character’s incentive for becoming involved in such work. But as of episode 2 (that’s one mystery in), things are trending towards wrapping up a little too cleanly and much too quickly, with much too much exposition. Never having read the source material, I’m not sure if this is reflective of Edogawa’s writings or if the anime is just not taking the time needed to tell each tale properly. This is the show’s greatest shame. Anything not run over by narration is enthralling in both mood and visuals, which makes me sad that this isn’t a Fall 2015 show, but it slows to a slog any time exposition is allowed to run rampant. As Episode 3 showed great improvement, I’ll definitely be watching and hoping for a more lips-off approach down the line.

Ushio and Tora
Streaming on Crunchyroll 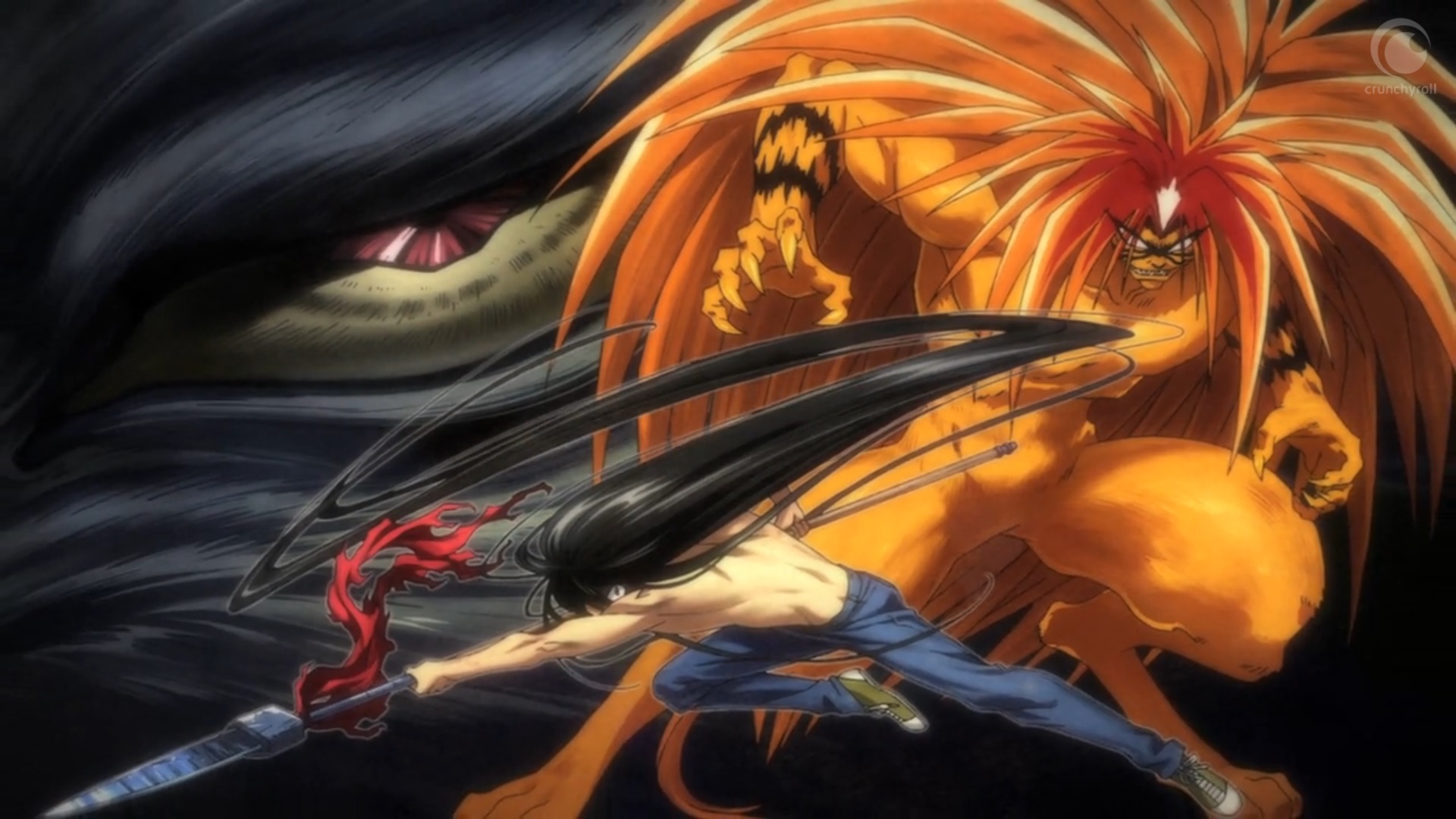 A property revival of a ‘90s shonen manga previously only graced with a handful of OVA episodes, this MAPPA x VOLN co-production very intentionally features throwback animation, a throwback plotline, a throwback protagonist, a throw… you get the idea. So long as you watched anime in the ‘90s, you know Ushio and Tora’s gist, gags, and story even if you’re not familiar with the original material. To quote Ani-Gamers Editor-In-Chief Evan Minto, “Yup, this sure is shonen action.” Even so, this series about a temple keeper’s goofball son who unleashes the greatest evil ever known and then works with it in an antagonistic relationship (reminiscent of the friendship among young boys) to fend off lesser evils is a fun watch. The voice acting is the staple of the series; the two main characters exude a whimsical chemistry that’s simultaneously hokey and endearing. Visually, the series does a great job of recreating the ‘90s while upping production quality to today’s standards. (Thanks, MAPPA!) This is one of those titles I could see myself initially dropping without regret but scolding myself for doing so every time someone mentions it thereafter. I’ll be watching, but it’s not a must-catch week-to-week deal. 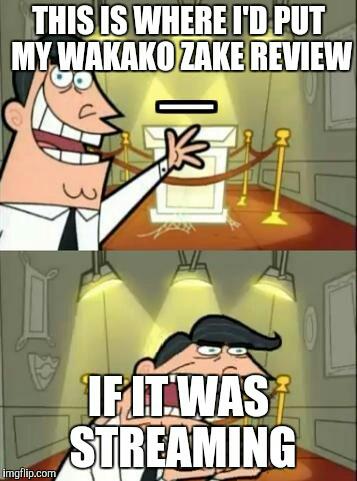 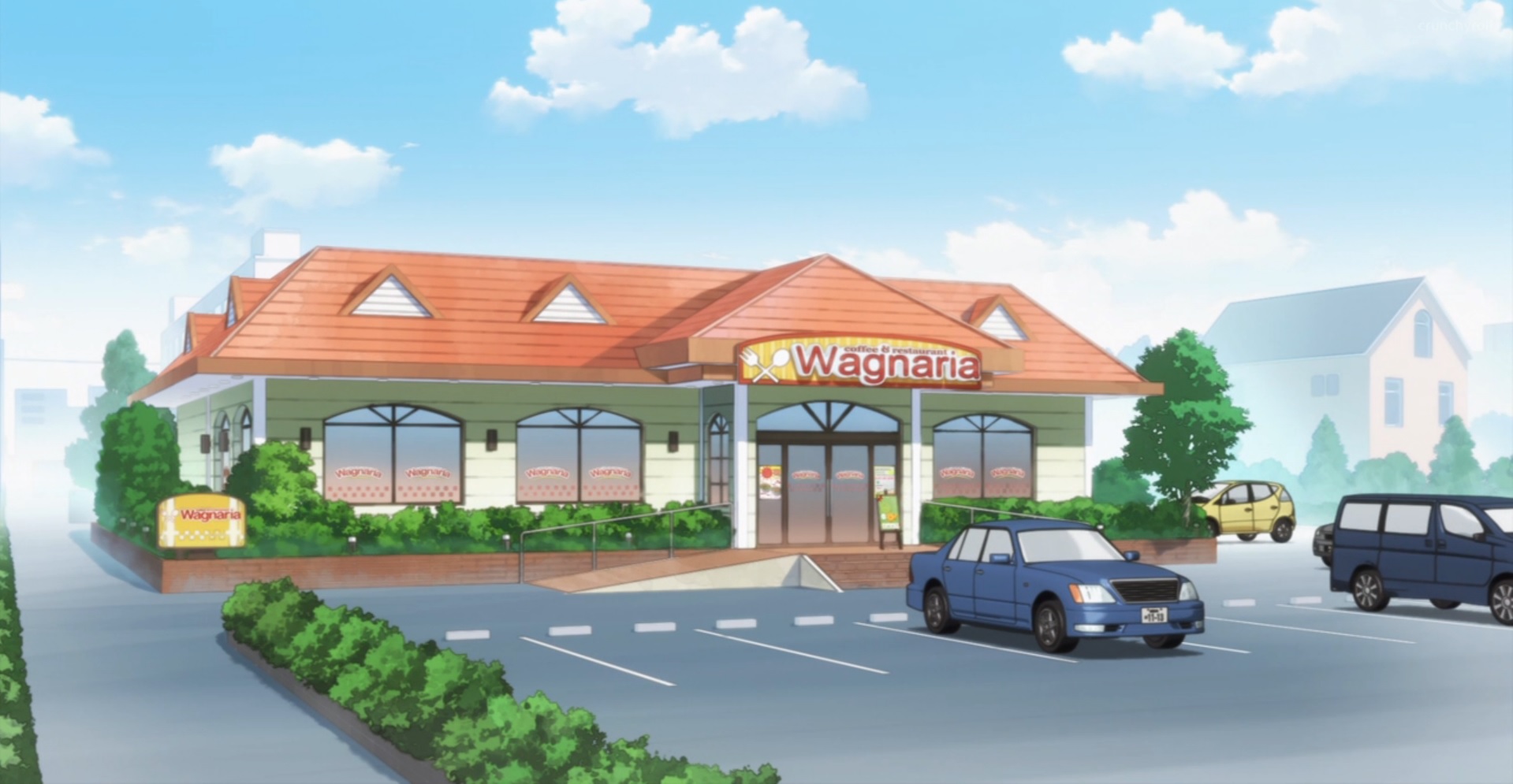 Working!! (Wagnaria) is one of those comedies that’s far better than it has any right to be, and I was so ecstatic over the simulcasting of its third season that I even volunteered to write episode reviews over at The Fandom Post. Seasons 1 and 2 largely built up Inami’s budding feelings towards Takanashi, who has taken on the task of trying to alleviate her androphobia. Surrounding those two are a cast of fellow employees at Wagnaria Family Restaurant so foiled by each other that the relationship strings sew some fabulous comedic setups. This season, which starts off with a new director, is going in new directions with darker tones, a focus on a new couple’s romantic inclinations, tender drama, and even realistic perceptions about existing gag characters. (Leave my poor Kozue alone, damnit!) Of course there’s still plenty of Working!!’s trademark timing that makes the funny go ‘round (even if some jokes are in unforgivably poor taste). The source manga finally ended, so I wonder if this will be the last season or if there’s one more waiting in the wings. Either way, I have to watch weekly to find out what happens and bust my gut while doing so!