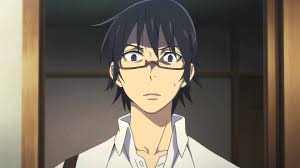 Satoru Fujinuma, a troubled and struggling mangaka, can travel back in time for minutes at a time. During these periods of “revival,” he tries to prevent tragic events from happening. As fate would have it, one revival leads to a particularly bitter tragedy…one for which Satoru finds himself framed. In a moment of panic, Satoru experiences a revival that sends him back not minutes but years. He finds himself in February 1988, just weeks before the disappearance of his shy and lonely classmate, Hinazuki. Erased is a smart, timey-wimey thriller that would be more or less just "well executed" were it not for its clever use of time travel. Growing up, I loved the '80s sci-fi show Quantum Leap. Once I’d seen the first episode of Erased, the comparison between the two shows became inevitable. Satoru’s commitment to right what went wrong mirrors Sam’s, and that makes it very easy for me to root for him. I can’t help but feel like Satoru will pay a heavy price to save the people he cares about, and the show’s foreshadowing to date has done little to dissuade me from that fear. The animation in this show does a couple of clever things: the use of shading to add tension in scenes resembles lighting techniques you’d see in a live-action mystery, but what I’ve found even more effective is the way the character expressions shift from benign to sinister to fit the scene. Did I mention that this show has a great opening song from Asian Kung Fu Generation? It’s ending song isn’t bad either. It’s a great show and you should be watching it. 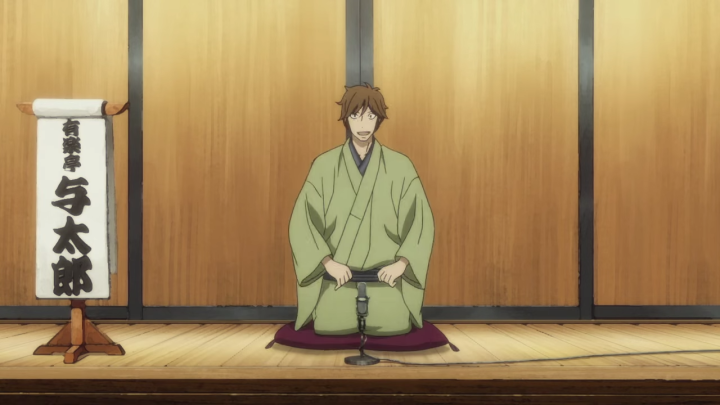 In the 1980s, a convict’s life is changed forever after hearing master storyteller Yurakutei Yakumo’s performance of “Shinigami.” Once freed from prison, the ex-con seeks out the master to become his apprentice and, after being renamed Yotaro (fool), is begrudgingly accepted. Before his training can begin in earnest, however, we’re taken back to Yakumo-sensei’s youth as he recounts his friendship with his fellow student and rival: the immensely talented Sukeroku. From the outset, it’s clear that their friendship will inevitably frame the events of the story going forward. This show does so many things well, but the musical score and sound direction are most outstanding. A blend of traditional Japanese strings and percussion flow seamlessly into jazz soundscapes that heighten both the rakugo performances and the overall production. The animation direction is also praiseworthy — especially the way it captures the rakugo performances while concurrently offering glimpses into the internal dialog of the performers. The strong characterization, the mysteries set up in the first episode, the outstanding portrayal of Rakugo by the voice cast, and the attention to detail used in setting the atmosphere of the Showa-era…this show is exectuted so well on so many levels. Showa Genroku Rakugo Shinjuu might be the best show of this season and is an early favorite of mine for Anime of the Year. I can’t recommend this show enough.

Grimgar of Fantasy and Ash 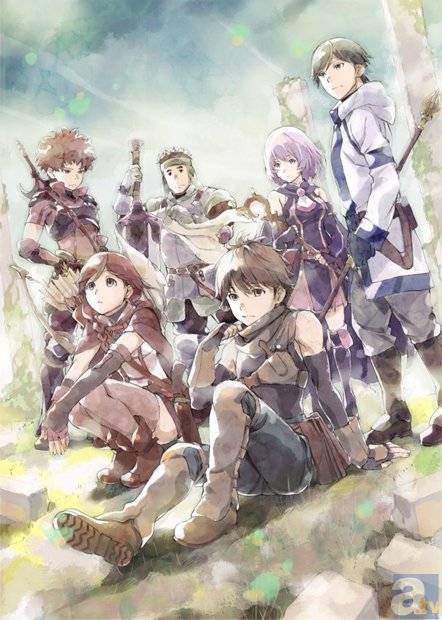 Grimgar uses the well-worn trope of “regular people in a fantasy world” but puts a spin on it that sets it apart from other fantasy shows. Grimgar follows the daily lives of a band of teenagers who wake up to find themselves in a fantasy world with only the dimmest memories of their former lives. In order to survive, they become Volunteer Solider trainees, choose guilds to join, and begin to eke out a living as best they can. In the parlance of tabletop RPGs, these kids are 0th level commoners struggling to become 1st level characters, and this aspect sets this show apart from other recent fantasy shows. Most of the time is spent in the quiet moments between before or after a hard day’s work, but what action there is in the show is violent and conveys a realistic sense of danger on the part of the heroes. In the second episode, the party attempts to finally make their first kill—a lone goblin. The ensuing fight was hard to watch, not only because the adventurers seem as if they could be killed at any moment but I also felt bad for the goblin as it struggled for its life. The show treats conflict and death with a degree of solemnity and respect you don’t often see in fantasy anime. Visually, the show’s backgrounds have a beautiful sketchbook style that lend the world a dreamlike, whimsical feel that contrasts with the desperate situations in which the characters often find themselves. Grimgar feels like a production where the staff have invested a lot of passion, and I’m looking forward to seeing where it goes next. 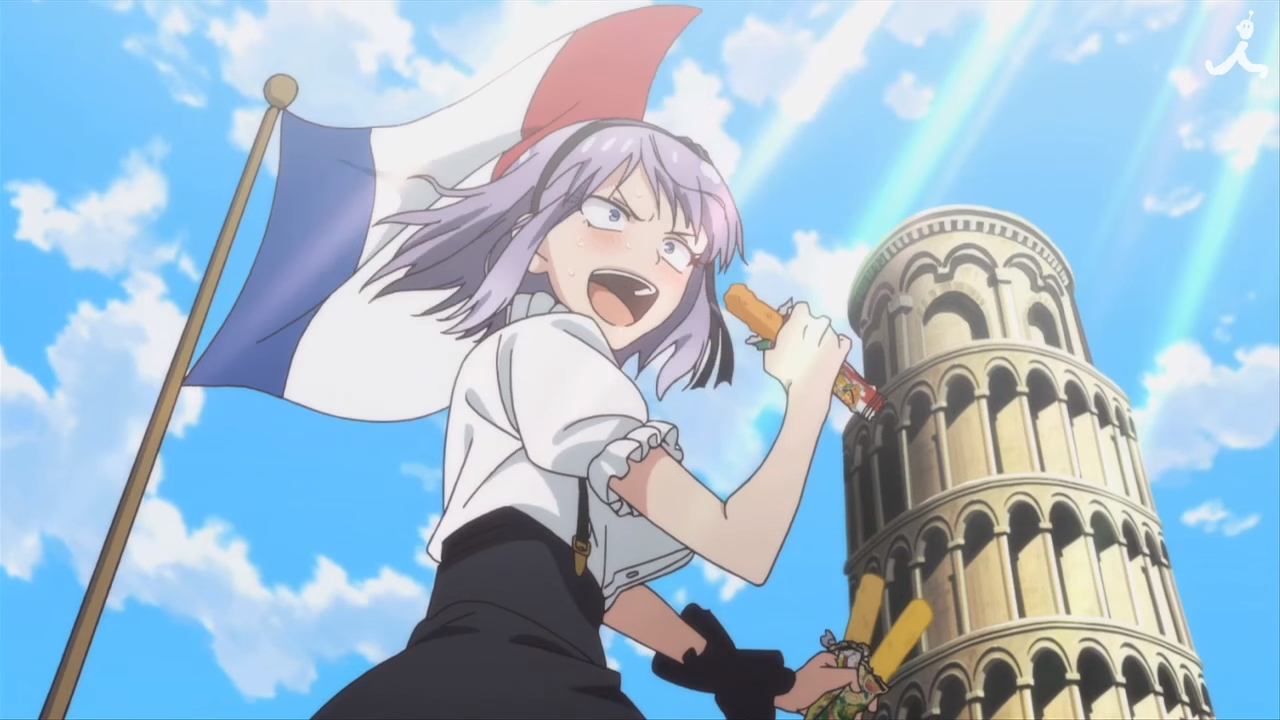 Kokonotsu Shidare aspires to become a mangaka, but his father, Yo, wants him to embrace his talents as a candy connoisseur by taking over the family sweets shop. Enter Hotaru Shidare, madcap daughter of the Shidare candy empire, who bears an uncanny resemblance to the heroine of Kononotsu’s manga. Hotaru is bent on recruiting Yo to join her family’s business, but first she’s got to convince Kokonotsu to take over the shop. Dagashi Kashi is easily the zaniest thing I’ve watched so far this season. The first episode is worth watching if only for the Gundam homages – in particular the umai-bou colony drop scene. The humor is not exactly groundbreaking as a mix of light fan service (except the first episode) and visual gags, but it’s executed well. Without a doubt, Hotaru’s outsized personality and melodramatic passion for candy give this show all of its humor and momentum. The rest of the cast exists largely for her to play off of. It’s been entertaining enough to keep me watching so far, but the format may not hold my interest for much longer. The settings and cast are both quite limited, so it will be interesting to see how they keep things fresh as the season progresses. 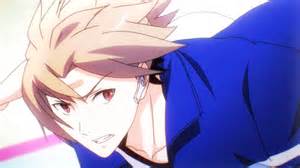 Nana decides to join Honan High School because of their famous Stride club, which revolves around a sport that blends elements of relay racing with the acrobatics of parkour. She soon learns that the Stride club has become the Shogi club due to a lack of members and sets out to rebuild the club with the help of fellow freshman Takeru. They quickly discover Riku Yagami, a tremendously quick athlete who also happens to be the younger brother of a famous former Stride athlete (strider?), but he insists he doesn’t like Stride. By the end of the first episode he joins because reasons, and soon we’re into the meat of the show…which is basically like Free! but on land. You’ve got the brainy guy, the super-cute guy who can pass for a girl, the serious “Stride is my life” guy…you get the idea. Riku and Nana both add an everyman element to the show (at least as much as you can have in a show where the main characters are models and at least one rival team is an idol boy band). The show is definitely aimed for a female audience, but the acrobatic nature of Stride makes for compelling action during the race scenes. It’s not on a Kuroko’s Basketball or Free! level, but the show has potential and is worth trying out if you’re looking for a new sports show.