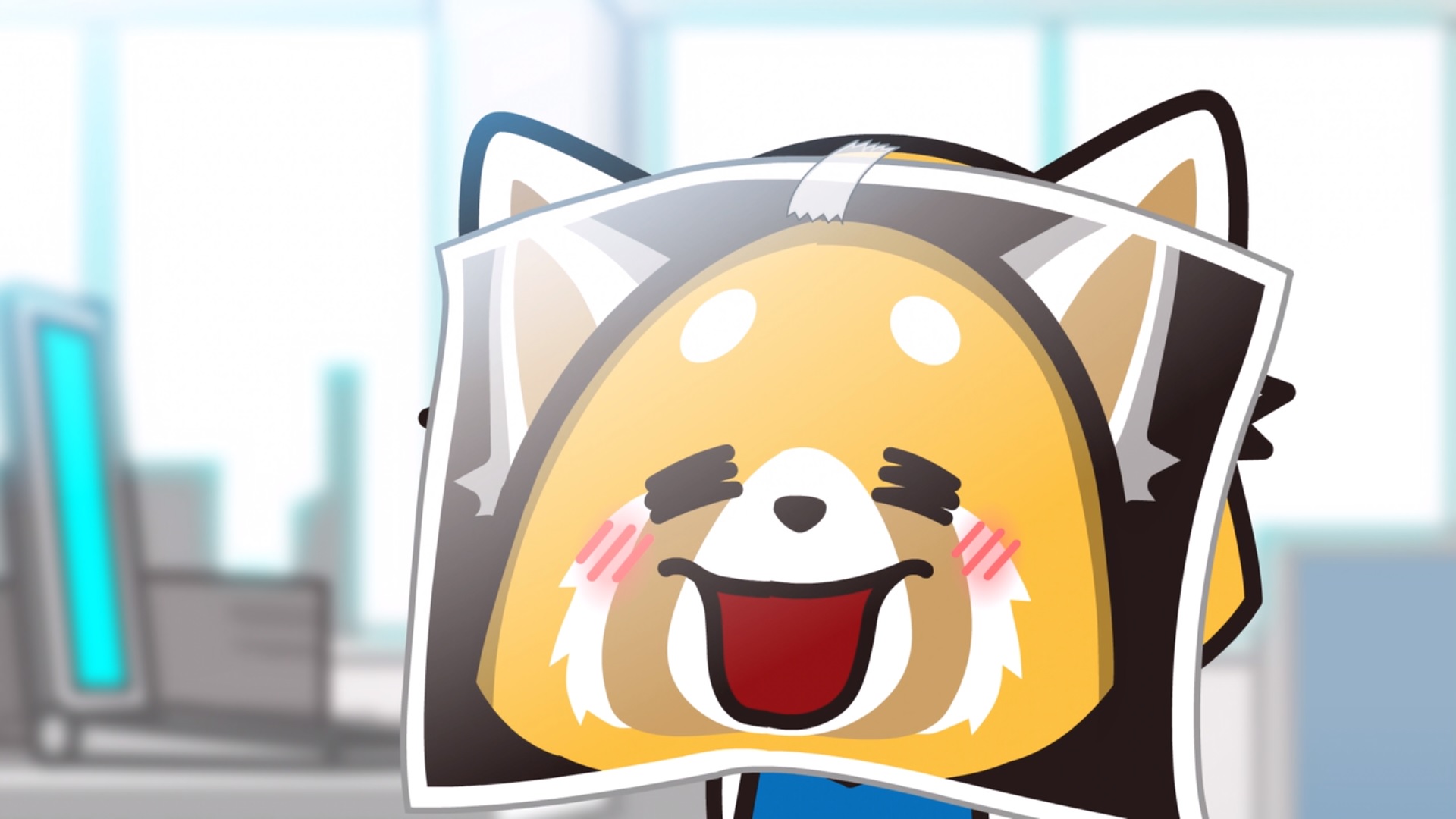 All I know of Sanrio is its ambassador of kawaii, Hello Kitty, and that the company has a gamut of similar cute and humorous characters focused towards garnering the attention of children and their parents’ salaries. (Needless to say, I don’t pay Sanrio much mind.) So that makes Aggretsuko – an overworked, overstressed, red panda office lady who privately pops the cap on her bottled-up public frustrations via a combination of self-hypnosis, beer, and death metal karaoke – Sanrio’s shadow and one of my new favorite characters. I’m watching this show as someone just about to hit 40 and currently saddled in a job where work is constantly piled upon my shoulders because I appear to be able to take it. This cartoon, much like the metal Aggretsuko loves and sings, is catharsis pure and simple, but it’s also really good.

The contrast between sweet and suffering is obviously the entire concept of this character/series, but what brings out the all-too relatable humor in that sadness is all the details that this fifteen-minute short certainly doesn’t have to include. There’s some above-and-beyond camera work that gives select scenes depth and vibrancy. Certain frame compositions intimate adult internalizations with scary accuracy. Contrasting the simplistic line art and solid, bright colors of public life with the scratchy lines and murderous color palate of a Sanrio-ed Devilman Crypanda for private thoughts is perfect. And reactions shots as well as comedic timing are on point 100% of the time. I watched three episodes for this column entry. Now that I’ve finished this review, I’m binging the rest, and you should too. 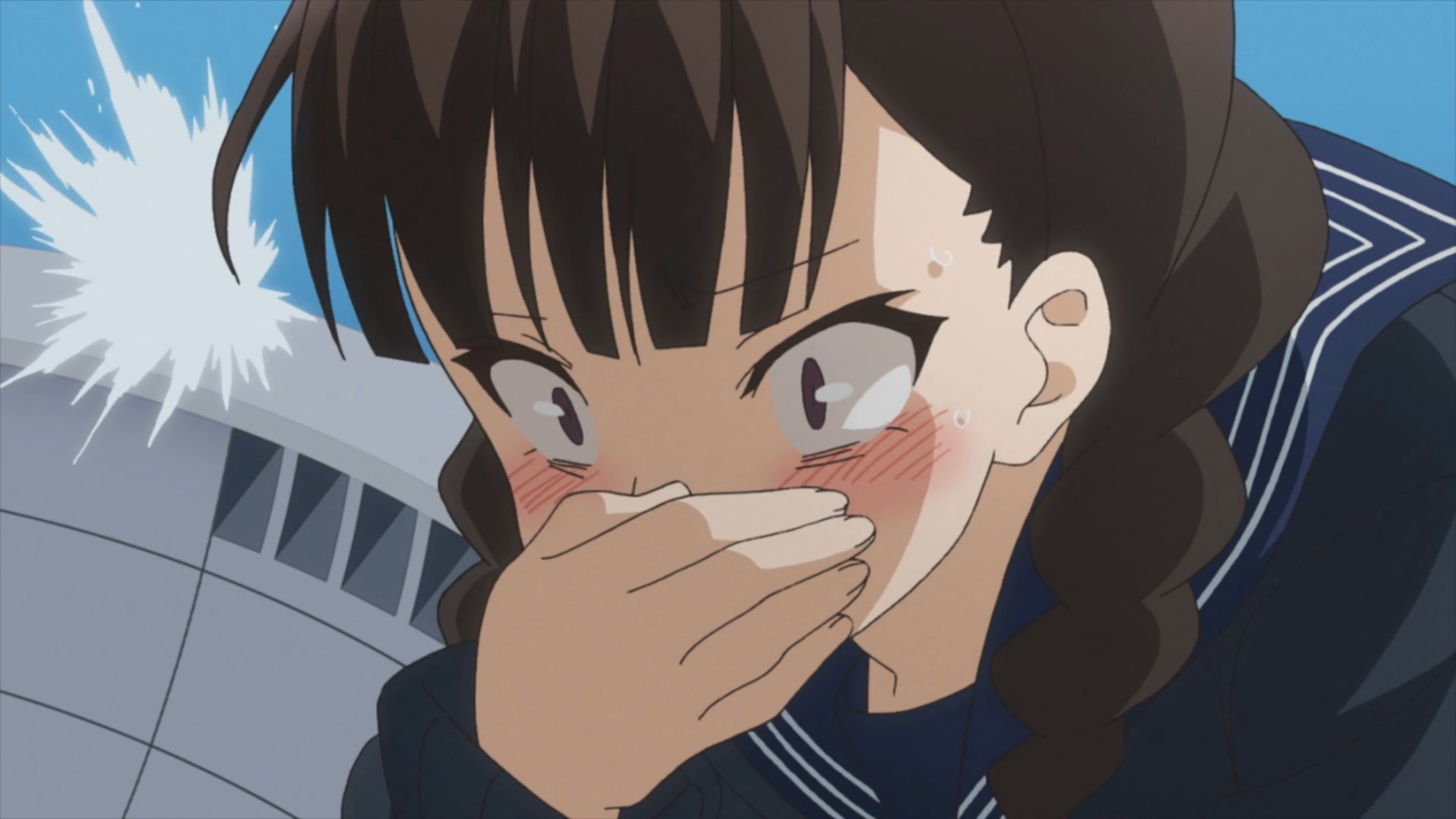 I should have known better to put faith in a series with a description that starts with onomatopoeia. This series of shorts tells “The various stories … that occur during the time spent waiting at a railroad crossing.” (A Romantic’s dream!) While the concept sounds like something begging for anthology participation a la Space Dandy or demanding the intimate attentions of a movie maker such as Makoto Shinkai, this series of shorts simply lacks soul. Absolutely nothing is visually engaging; you’ve seen this scenery – the yellow and black striped arms, the alternating red warning lights, the tracks, the trains – as it is presented here a million times over in various anime. People with true vision would find a way to tune the environment to complement the story being told, but Crossing Time, as far as Episode 3, relies on dialog to carry the entirety of its dramatic content … and the writing simply isn’t up to being thusly tasked. Even though it’s a short, the fact that the promise outweighs the follow-through is unforgivable. After all, if I can imagine something better, what do I possibly have to gain from watching? Dropping this like a rock to save me from drowning in yet another anime stream. 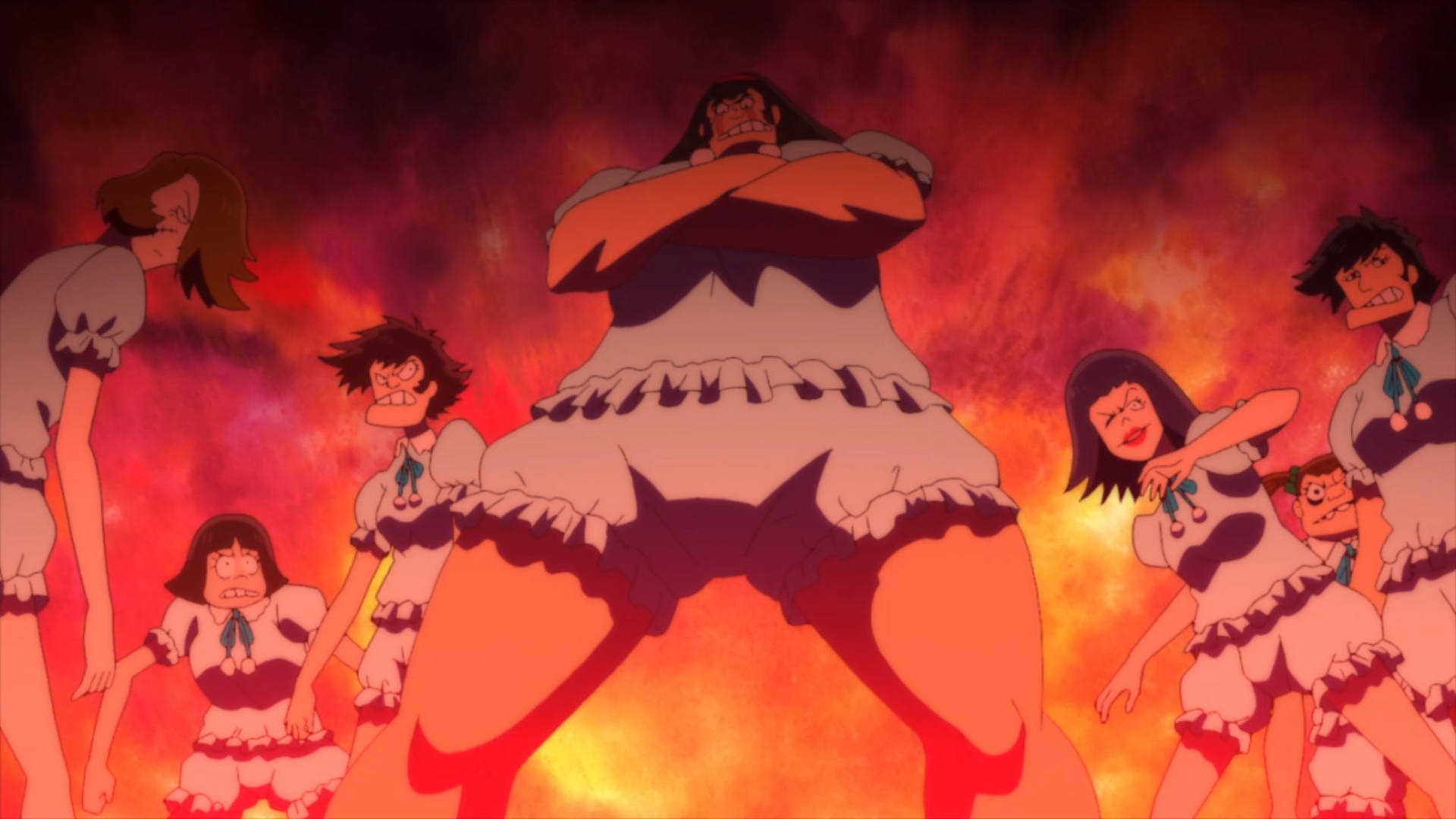 Fear not a loss of sparkles or flowers; if you’ve got a hard-on for classic shoujo character designs (given a modern finish), uncensored violence, loads of yuri, and skin exposed by battle-damaged onesies, the newest addition to Go Nagai’s Cutie Honey franchise has you (not necessarily its heroine) … covered. Even if you don’t find anything appealing about that opening sentence, this title might still have a few things worth your time. There’s a lot of goof here – from ridiculous monsters and the tried-and-true, double-faced master villain to the band of delinquents with (slightly) veiled hearts of gold and even good ol’ sit-com yuks.

Cutie Honey was always one of the magical girl variants I’ve wanted to check out. So much like the Masaaki Yuasa Devilman Crybaby that dropped last season or the Ashita no Joe spinoff (MEGALOBOX) this season, Cutie Honey Universe is the body into which I’m dipping my big toe – feeling out the temperature via a modern incarnation to gauge interest in an older property … and (I think) that’s ok. Sure, I may not get the twists or references, but the show is entertaining as hell, and I’m gonna be watching each episode, as soon as it airs, every week. 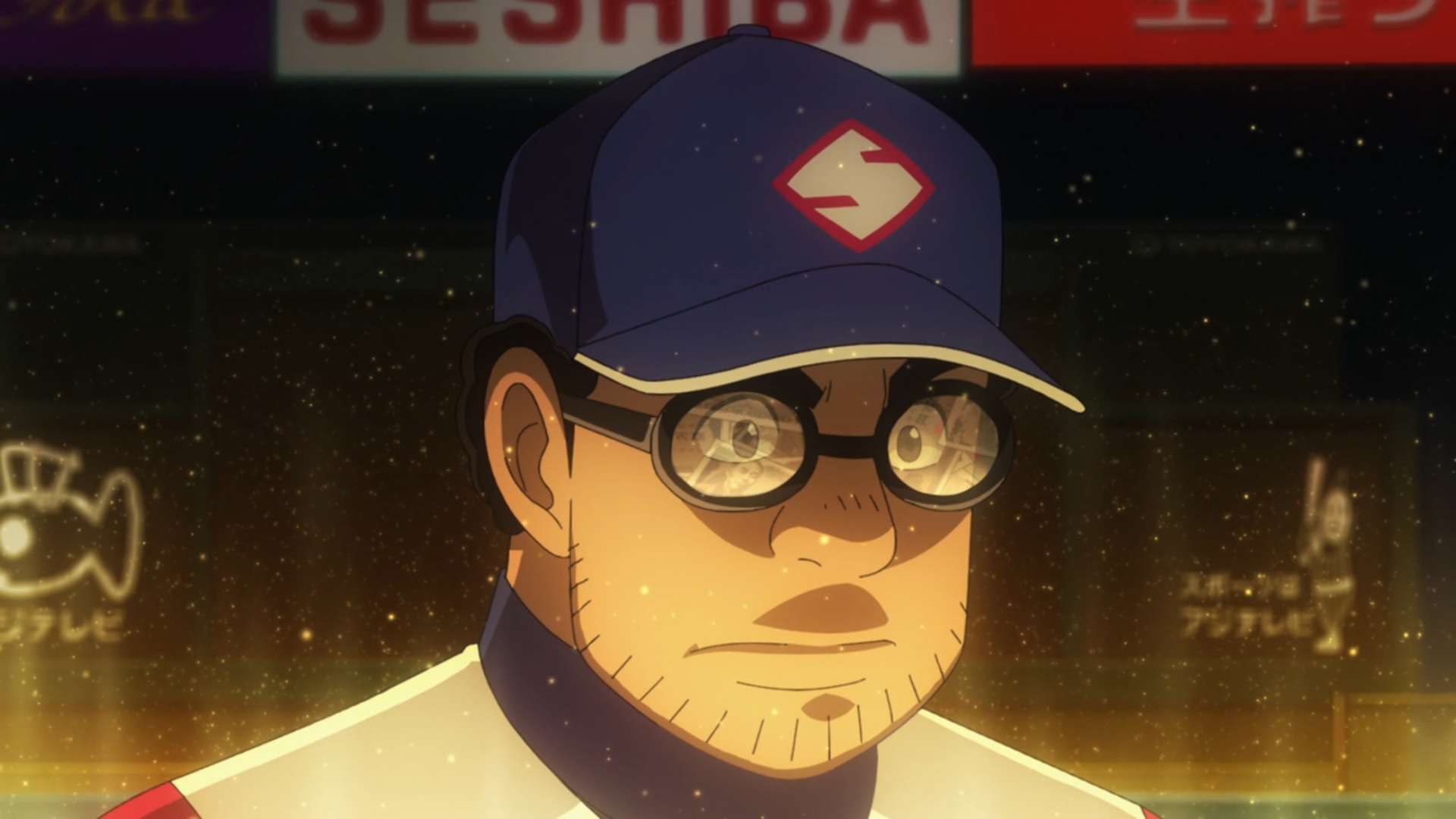 Bonda Natsunosuke, a left-handed middle relief pitcher for the Jingu Spiders, is in the twilight of his career and has yet to make an impression. He’s obsessed with his contract rate (a mere ¥18 million) and those of the batters he faces. He’s memorized all their stats but lets them intimidate instead of inspire. Bonda firmly believes there’s money in the banana stand under the mound, but can he dig in hard enough to dig it up?

I can’t really pin down why I like this show so much. It’s got everything I hate about baseball, including baseball and the deluge of stats that fans of the sport constantly spew. Luckily, the importance of the latter is rendered next to worthless by the way the animation and voice acting carry tension and emotion in every scene. The CGI is actually pretty good in comparison to other series; the motions of pitching fooled me a few times and offer a fluidity that I can only think to call video game sexy. This is a series about stress from earning your keep in a competitive field, its impact on self-worth, and the value of friends, and the show’s cast is entirely made up of 20-somethings and older! Like I said earlier, I’m not sure why I really enjoy watching this show (possibly for general sympathy for the MC), but I’m definitely gonna keep watching to see who the heck the cute woman with the picnic basket is in the ED! 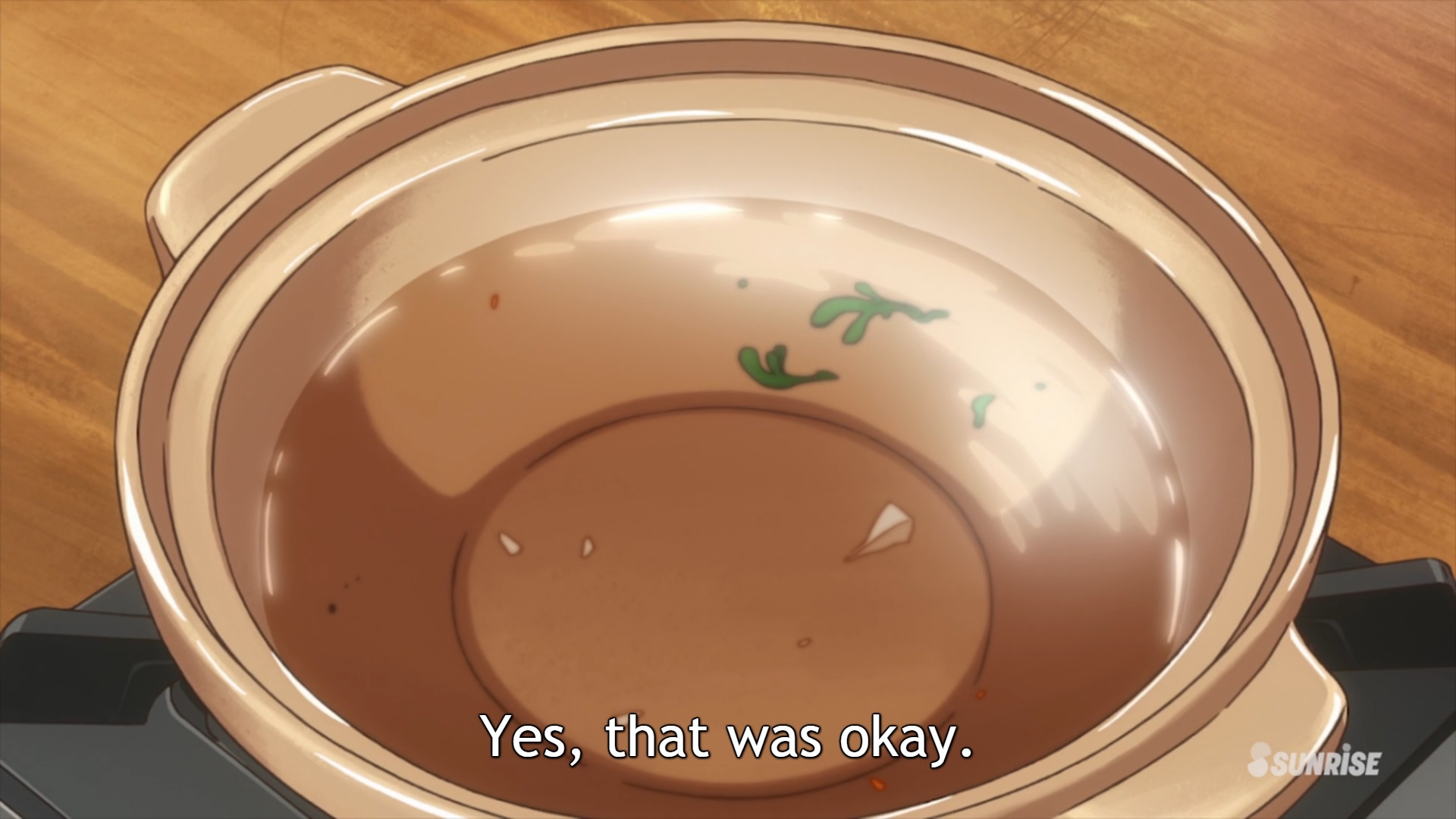 Unlike Restaurant to Another World, where a door opened to multiple parallel worlds, Isekai Izakaya so far only focuses on one linked-in dimension – a medieval Western European(-ish) nation. This device works in that it shows how the popularity of the food served at the modern day izakaya wows the palates of the past and does a good job of showing how word of mouth brings business to the shop. Unfortunately, that’s the selling tool of which I’m most weary and tired. The focus on presentation, indulgence, and reaction seem more advertisement for a nation’s cuisine than dramatization of enjoyment.

The expression of reactions in theme with character station is charming but also wears thin pretty quickly; I’m here for the food and drink and reactions, and overthinking is the enemy! The show also seems written to try to appeal to the success of similar series, but tries too hard; forced humor (whatsontap is cute as a one-off gag but runs dry real quick) and overblown reactions are the bane of this 15-minute short that seems all the more extended for such tactics. Adding to my distaste for this series is the permanent overlay of the series title, episode title, and the Sunrise bug. This is nothing less than annoying and also makes for cluttered reading when dialog translations are on screen. All of my grievances (save the Sunrise bug) are nullified with the really solid Episode 3, but I’m afraid too many bad experiences have soured me on this series. After my third trip to Isekai Izakaya, I’m closing out my tab on a good note but not coming back. 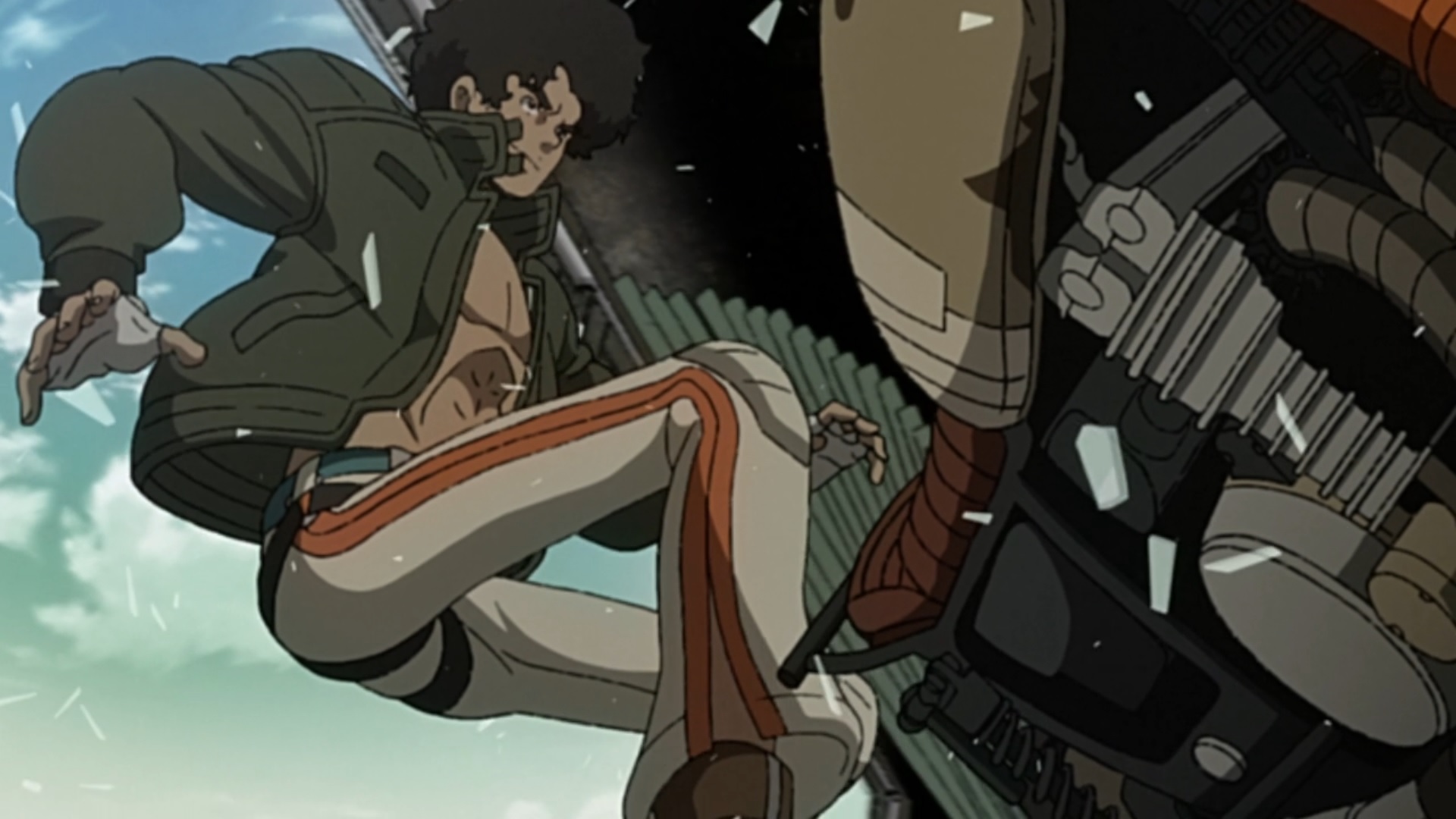 Ashita no Joe (aka Champion Joe) is one of those anime series I’ve always meant to see, so on the 50th anniversary of the manga’s original debut date, I decided to at least check out the 2018 spinoff. The art in MEGALOBOX looks like Cowboy Bebop, but the animation comes across as owning 2018 production values. The art is a direct retro style, but movement, framing, and camerawork all speak to having learned from the past. This anime is, to coin a made-up term, retro-gorgeous™ to the point that I wonder if it’ll speak to the current generation of anime fans. (We’ve reached a brink, folks.)

I want to describe the color palate as ruddy – a fairly, if I do say so myself, apropos descriptor for a series about a blood sport. And the fact that the art style doesn’t come across as “clean” speaks a lot to what this series is actually about. While I’ll forever love the drama behind an underdog story, I specifically love that this series, at least so far as Episode 3 is concerned, introduces issues on a personal level and expands them to include their influence on/reaction to social class strata and citizenship issues. On a lighter note: even though I’ve never read nor seen any of the previous iterations, I gotta say Junk Dog choosing his new name at the end of Episode 2 made me well up in some weirdly embedded sense of faux nostalgia. Also, Emi Nakamura's (Laughing Salesman NEW OP) contribution to the ED is wonderful. There’s no way in hell I’m not watching this until the end. 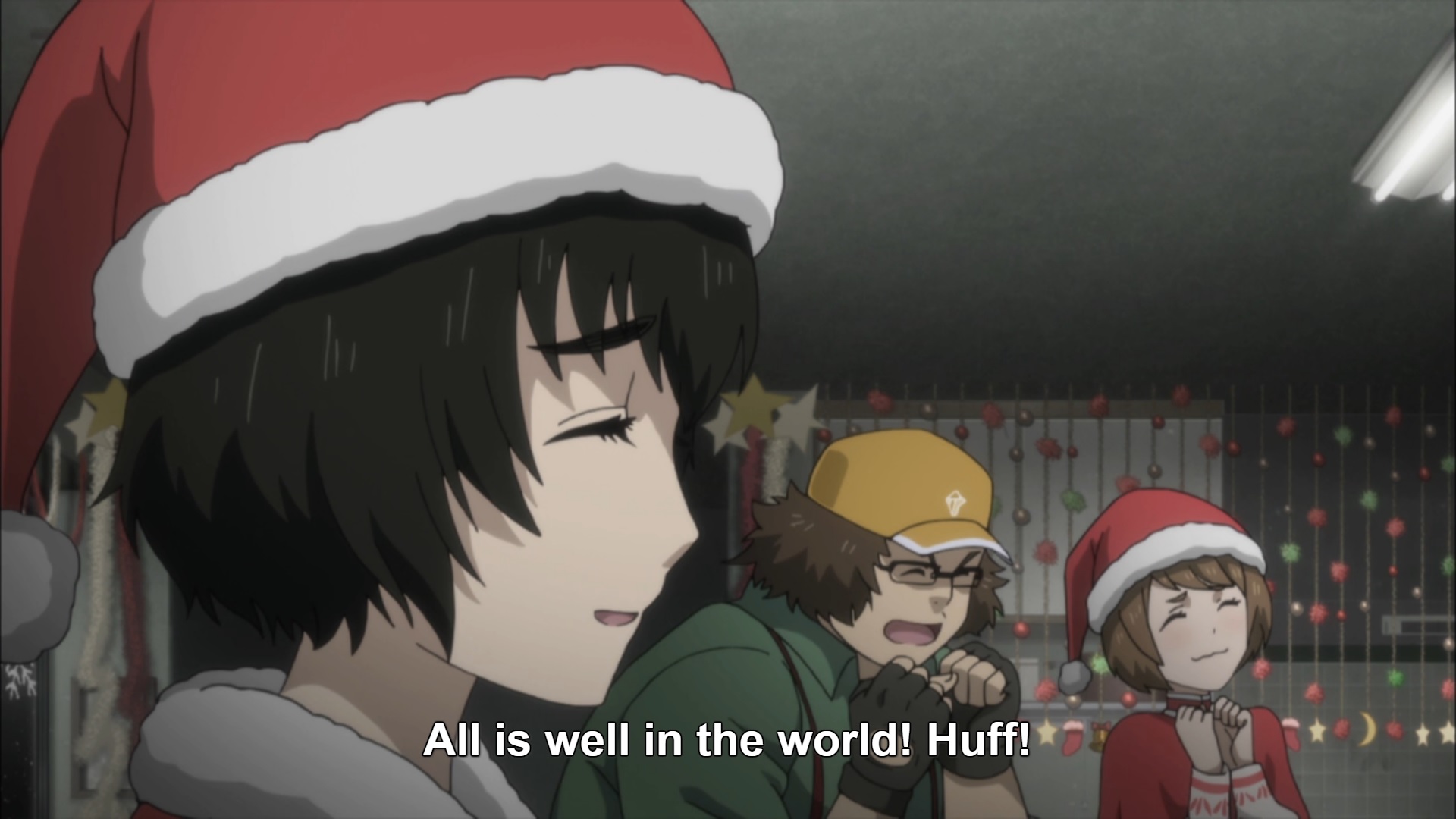 This is in no way a starting point for viewers new to this series. Things have changed, and to realize how as well as why that divergence is important thematically as well as plot-wise, viewers are going to need to have watched the original series and the movie (Déjà Vu). And while my reaction is admittedly tainted by a great love for these characters, the primary problem with this show remains: it is obviously faithful to its visual novel origin. Recognizing that fact, no matter how many times in-show jokes try to own it, can easily douse the flames of interest or taint the viewing experience for many. However, the writing, both conversational and situational, is really good and does not baby the audience.

The audience, after a pretty great cold open, is dropped into a new world – one with an all-too familiar ending. This world, thanks to the research of a certain deceased scientist, is obsessed with extrapolated memory-driven AI.  WHAT COULD GO WRONG? To say I’ve been waiting for the conflict introduced in the very beginning of Episode 3 is a truth – one I regrettably feel obliged to report as a prediction come true. (If it were not for the predictable nature of the source material, the anime might be more surprising.) Steins;Gate is a love letter to sorrow junkies, so needless to say, I am down for all future twists from this animated heart wrench. 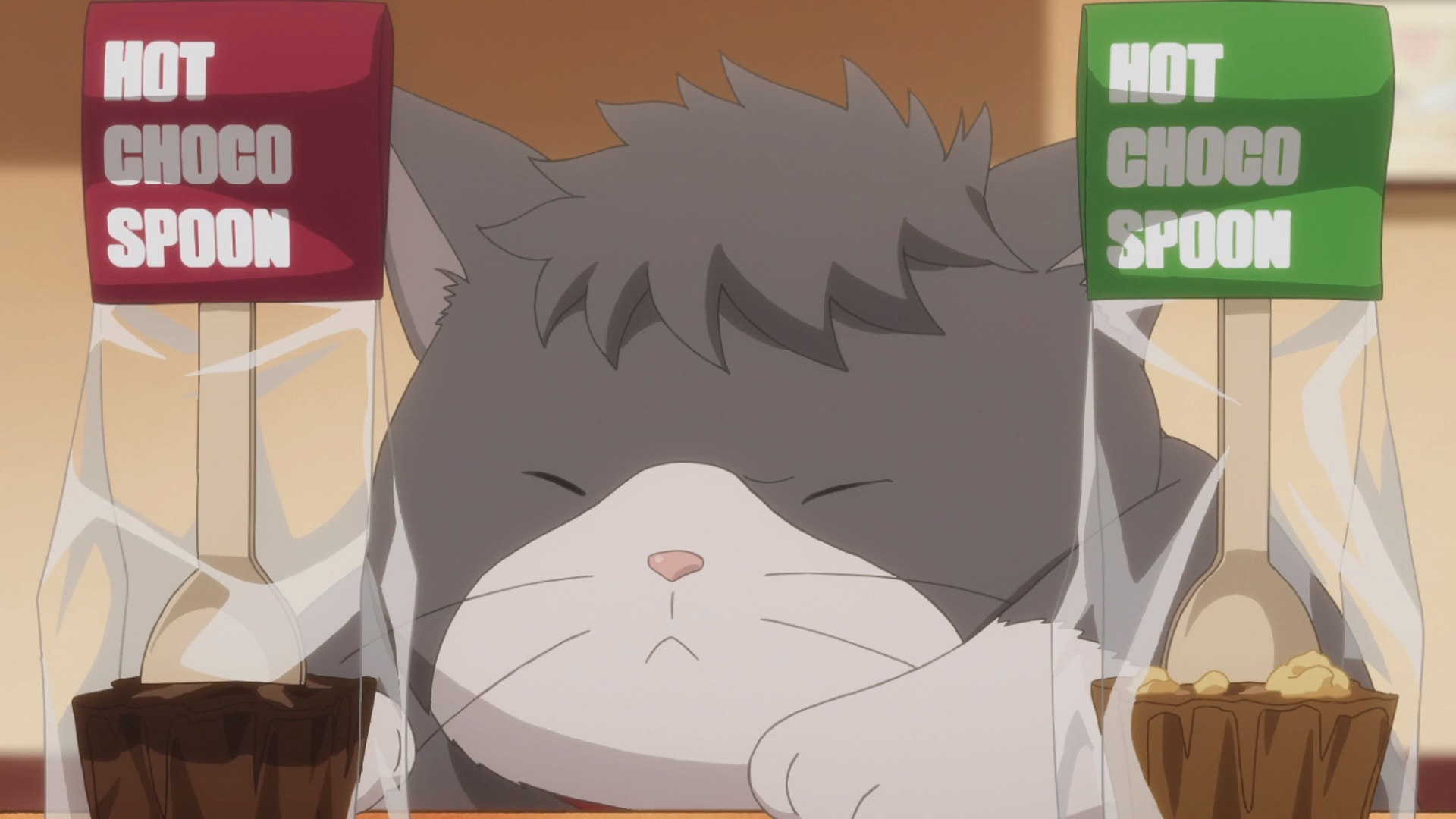 A comedy with balls almost as big as those on its cat. Gaijin transfer student … photography club … yada yada. What really makes this show is its quick pacing and sucker punch visual gags. (The famous character relegated to a barfly in a coffee shop FLOORED me, but Episode 3’s direct narrative nod to said character is utterly disappointing.) That’s not to totally disregard the show’s in-show show, “Rainbow Samurai,” which is amazing, but all I’m sayin’ is that that that joke won’t be worth half as much if an entire episode of tada never falls in LOVE isn’t an actual episode of “Rainbow Samurai” (sans any characters, at least visually, from the former). That said, Episode 3 secured my viewership with the risks this comedy is willing to take regarding narrators.

It’s almost sad that the entire anime does not take place in that coffee shop; the bits in classrooms and with the photography club maintain an engagingly energetic air but stop short of being particularly memorable. And thankfully, tada never falls in LOVE is not the typical learning anime dedicated to cameras. (I think there was one, 30-second explanation of indicators on an SLR camera’s menu display?) Instead, the show revels in having fun with its delivery and toying with viewer expectations. So no matter the setting, the comedy is what will keep me coming back week after week.