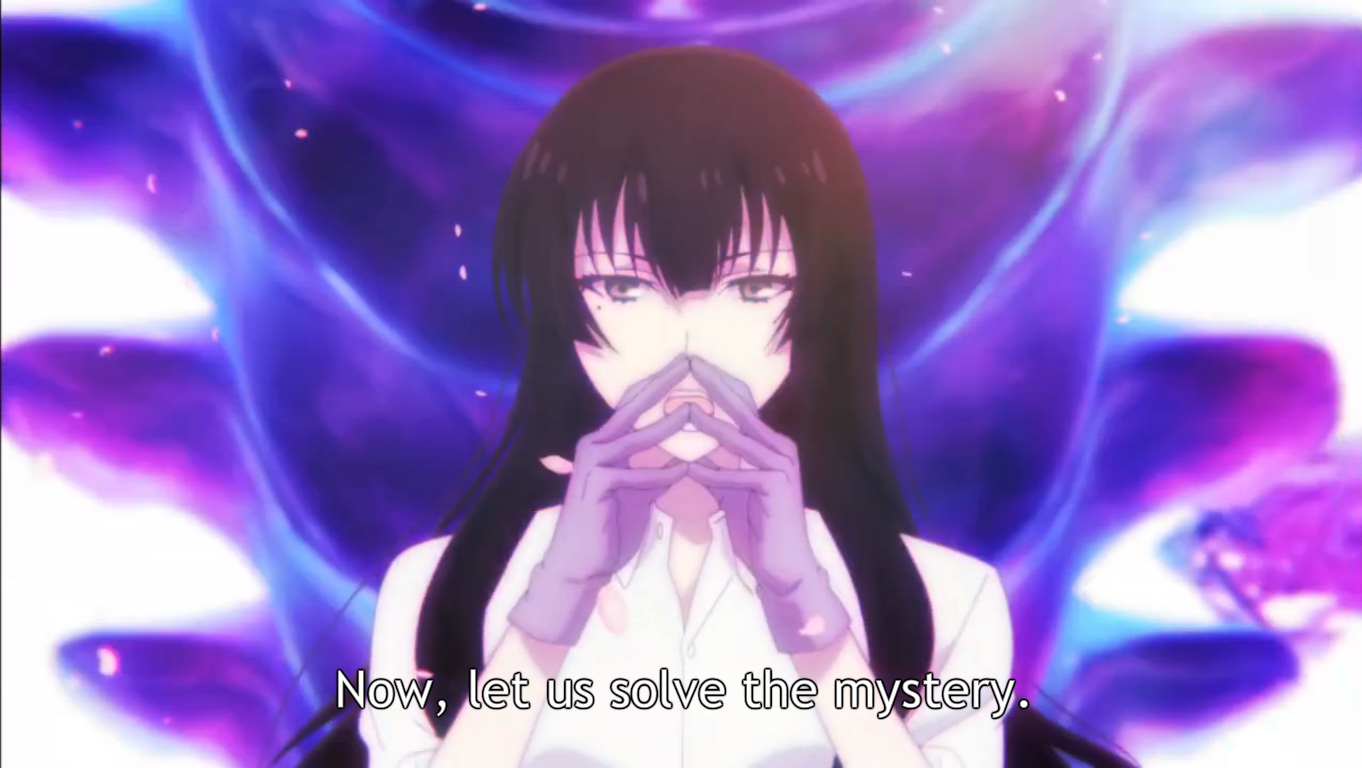 Sakurako, a twenty-something bone expert, lives in a mansion with her maidservants and butlers while a high school boy serves as her minder and helpful (if only a little unwilling) assistant. Together they go about trips and excursions. Shoutarou, her assistant, usually just wants a quiet day and maybe some nice food along the way, but somehow they always find human bones somewhere and usually embarrass the police by during their jobs for them. While it is a little repetitive, I love Sakurako from the top of her head to her bones (no pun intended). She’s a misfit and completely stone cold unapologetic about how she talks, treats, or interacts with people. She’s clearly got issues. But she’s not hurting anyone, so I’ll give her a pass. Shoutarou spends most of his time bailing her out or apologizing for her behavior. Together, they make a good team, but some elements of the show are a little contrived. Early on, we learn that Shoutarou reminds Sakurako of her dead little brother, so I know there’ll be tears further down the line involving said deceased sibling. Unlike Young Black Jack, I love Sakurako’s ramping into a mystery with a Yu-Gi-Oh-esque Heart of Cards animation whenever our resident black haired lead slaps on a pair of medical gloves and goes to work. The voice cast is having fun, and while some elements could use improvement, I think I’ll last longer with this than Dr. Tezuka’s current animated hero. 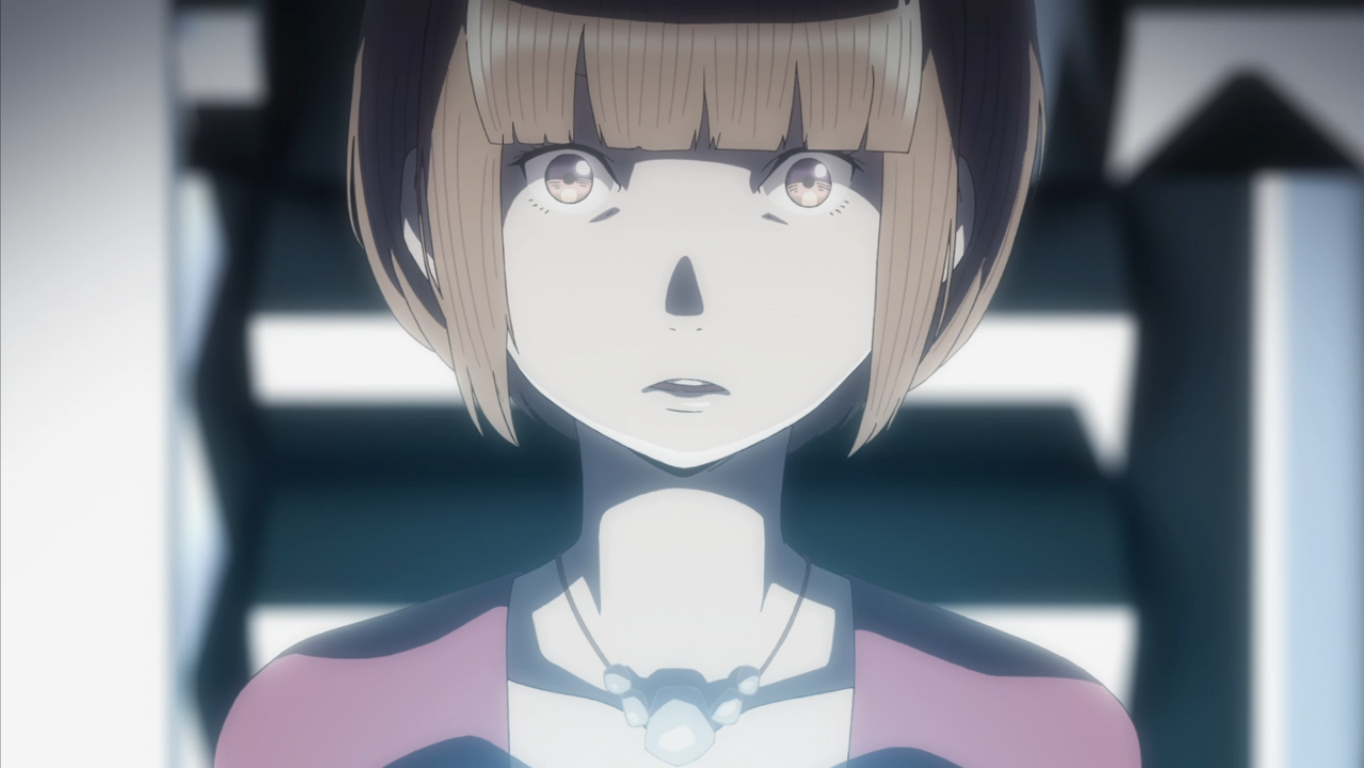 The best mysteries start out as anything but mysteries. Professor Sohei Saikawa takes his architectural student Nishinosono Moe, a rich orphan, on a class trip to a nearby island that houses the homicidal, albeit brilliant, Shiki Magata to talk with her. Saikawa is excited to talk with the good Doctor, while Nishinosono hopes to follow up a conversation she had with the incarcerated genius. While there, Magata turns up dead despite being locked in a room on her own for fifteen years and having round-the-clock video surveillance. Now, everyone's trapped in a building with a killer of a killer. The show doesn’t let you in straightaway, and I wouldn’t expect anything less of a noitaminA show. Director Mamoru Kanbe and series composer Toshiya Ono slowly take us into the nightmare by building, block-by-block, the scenario. I found myself staring at the screen as memories and conversations pass by, not really remembering that this is a show about a serial killer. It has this ability to disarm you with the mundanities of life for this Professor and his student as they talk about Dr. Magata, what life means to them, and how neither wants to talk about the fact that Nishinosono is in love with Saikawa. The Perfect Insider looks like it will go where it wants, and I’m just fine with that.

P.S. To every one of the characters who will probably die for my amusement and disgust, thanks for the entertainment. 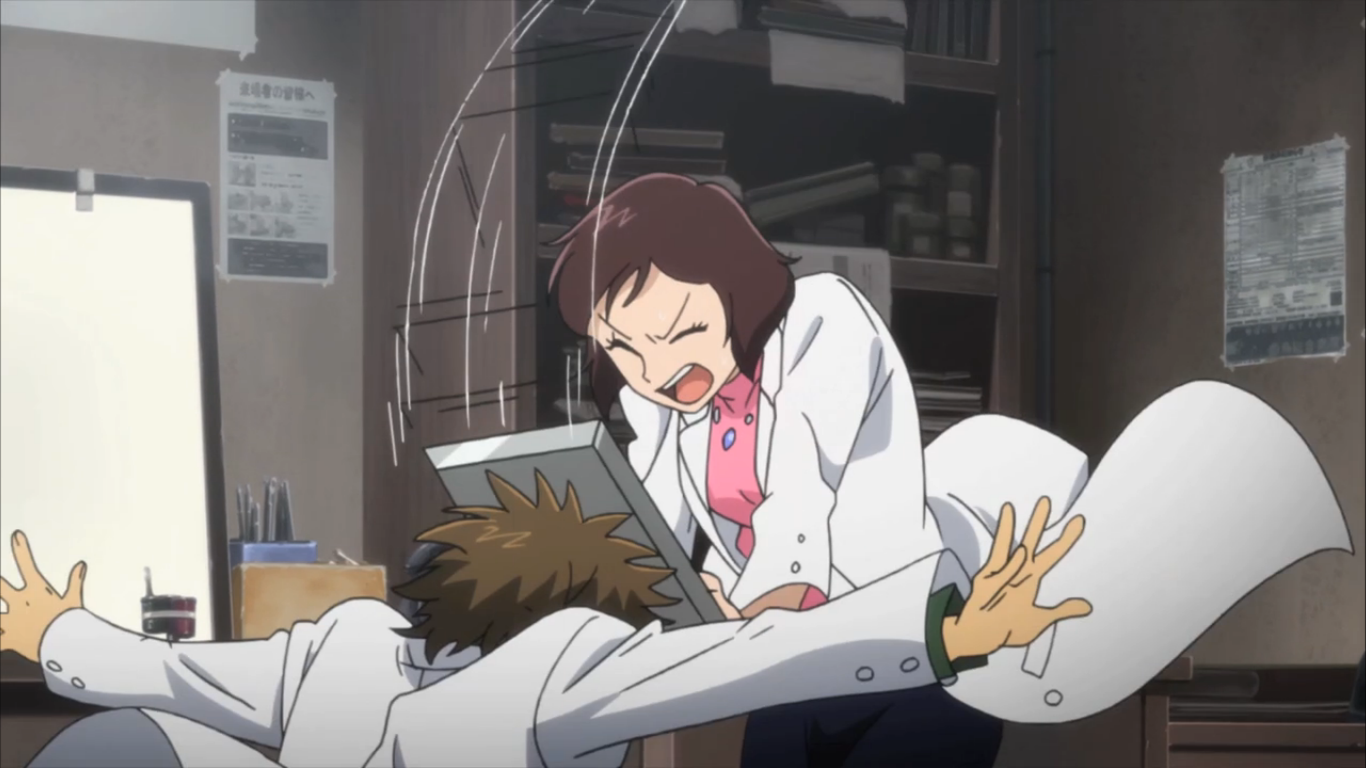 Black Jack, one of famed manga author Osamu Tezuka’s greatest creations, is back on TV. The show, based on the manga by Yoshiaki Tabata and Yugo Okuma, takes place during the doctor’s formative years — before he became known as the “surgeon with the hands of God.” Kuro Hazama is a struggling medical student in 1960’s Japan.  I like where Young Black Jack is trying to go. It’s a chance for viewers who don’t care for the earlier incarnations of Tezuka’s signature work to jump in. Unlike his later versions, this Hazama isn’t as sure of himself nor as skilled at performing audacious operations as he will be. It’s nice to see the beginnings of his story. The problem is that I think that Black Jack is being treated like a comedy. The reactions of the cast are so over the top, and the villains are so vaudeville in their delivery, that for the life of me I can't take them seriously. The cast jumps between jokes and serious medical drama so fast it’s hard to see what the vibe of the show is. It doesn’t help that an unknown, older voice keeps a steely tone describing the show’s upcoming events in dire terms while Hazama strips to the waist to Prepare For The Operation. While director Mitsuko Kase isn’t lacking for talent or experience in helming a project, this is a show that I’ll hold at arm's length for the next few weeks. If it drops the comedy angles and the odd semi-nakedness and delivers on some of drama foretold in the opening credits, I’ll let it live. Otherwise, it might be DOA.