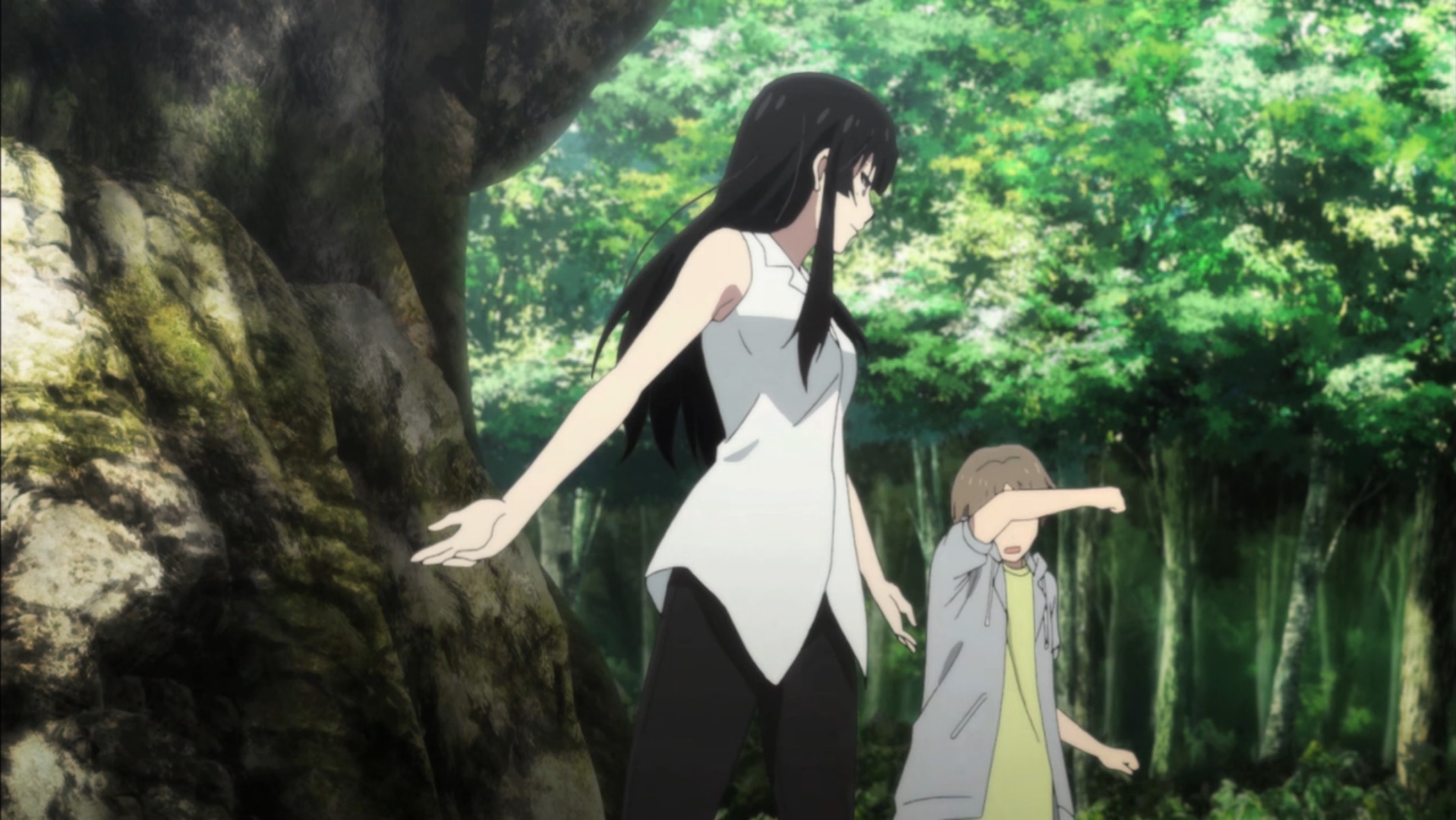 Studio TROYCA adapts a light novel series centered around 20-something bone otaku Sakurako, who just so happens to come upon human remains every time she leaves her house. Bones bring a smile to this young woman’s face like nothing else, but her adopted assistant, a highschool boy named Shoutarou, is less enthralled by the bones than by the woman and can be relied upon, episode after episode, to call the police to spoil her investigative fun in the name of civic duty. It’s a shame this show is so straightforward and predictable. Sakurako's dead younger brother having a name similar to the young assistant is a transparent device, and more often than not the flow of the show seems like an over-narrated Sherlock. I dig the tsundere, especially her background reactions and leers, and that her alternating coldness/warmth is not directed to a single person but rather to people and bones (respectively). There is also good chemistry between the co-stars (even though that runs into a rut as early as Episode 3). Hopefully there will be twists that will make this an interesting watch, but all I really enjoy as of now is watching Sakurako react. That’s simply not enough to justify 24 minutes every week. 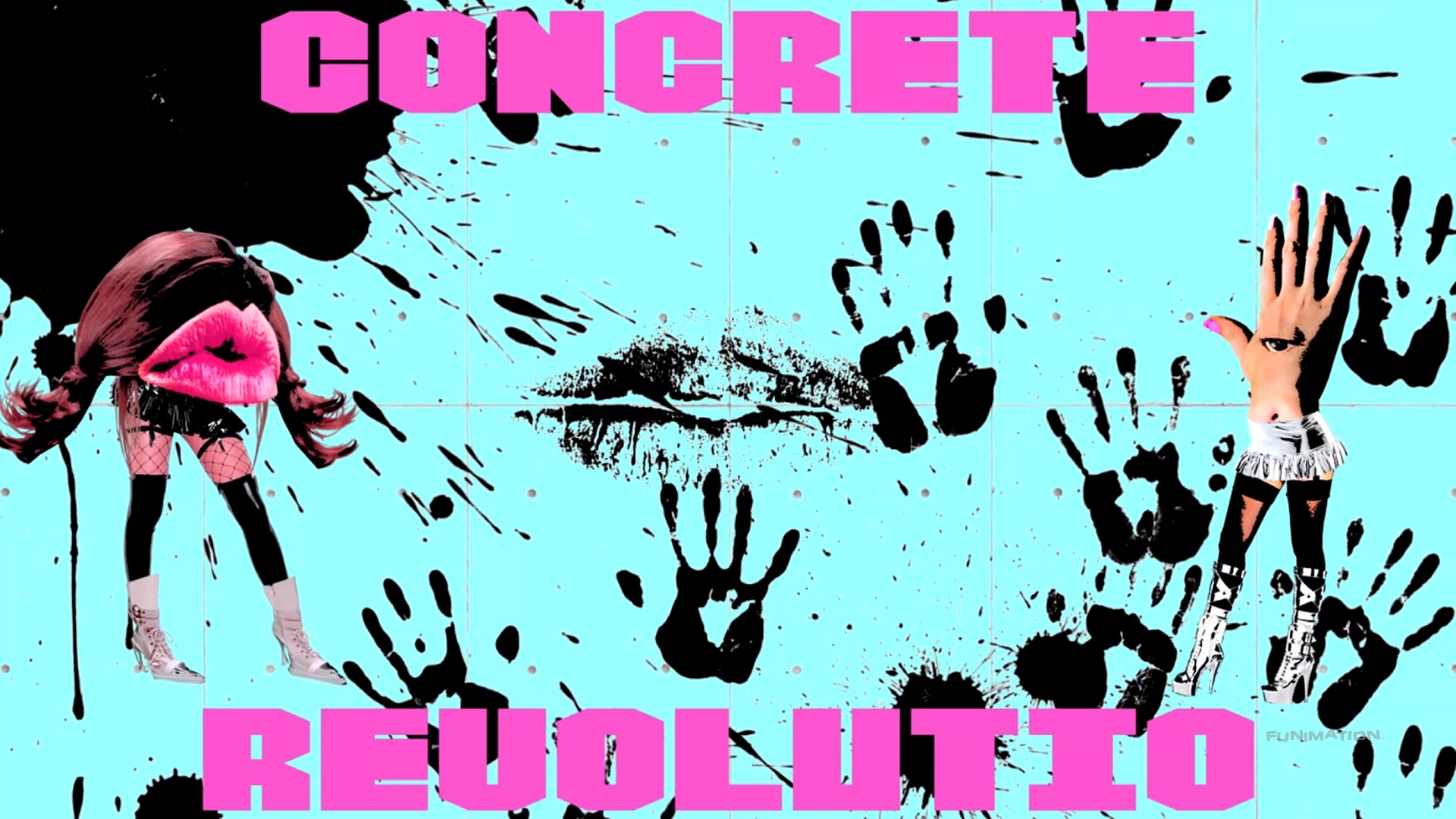 One glance at this show’s homepage on FUNi’s site, and you’ll be clobbered to death with the fact that this is a Fullmetal Alchemist reunion of sorts (writer, director, and studio). THIS IS NOT FULLMETAL ALCHEMIST. This is Anime: the Anime … for better and worse. The show’s very bright, frantic, and a special kind of hyper (entertaining without being overbearing), which is an achievement given its premise: that every imaginable (and then some) type of superhuman — robots, magical girls, ghosts, kitsune, etc. — abounds and causes stuff to happen to superhumans and regular ol’ humans alike. I love that the show flips the monster of the week formula to focus on a "hero" of the week. Some of the episodes have played with time, which while unnecessary, was handled so competently that I could not bear a grudge. As much as this show makes you want to turn your mind off to watch the action and pretty colors/textures (there really is some lovely art here, not to mention this season’s best ED), the vignettes, threaded together by the oversight committee (Superhuman Bureau), can be pretty fulfilling in their own right. This seems like it’s working up to something (and it better be BIG to be worth it) but, for now, is a great title to catch intermittently without any sense of commitment. 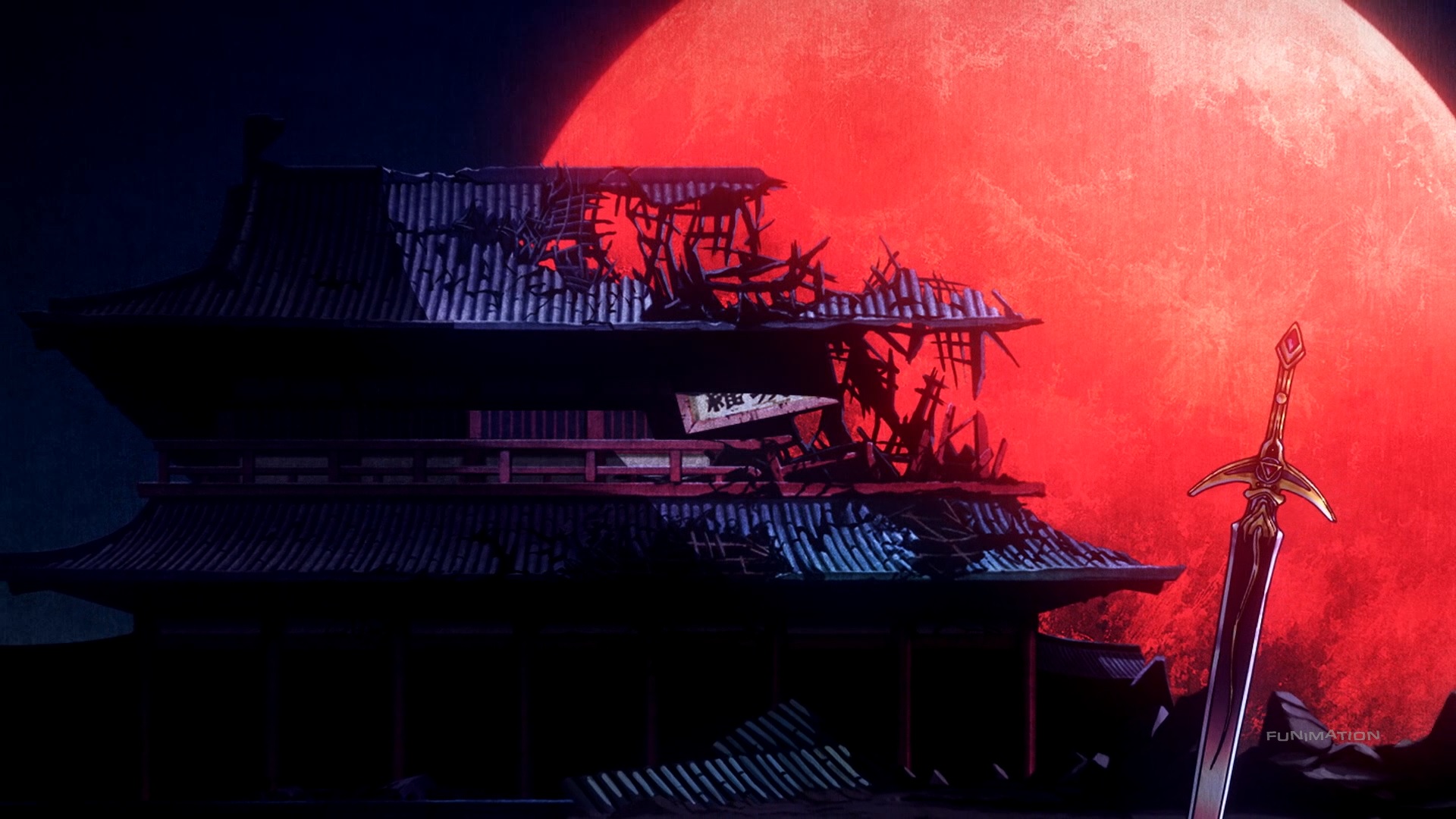 The struggle of Makai Knights and Alchemists against the horrors and those who summon them continue in Garo: Crimson Moon! (Don’t worry; all the exposition’s in place so that you don’t have to watch the previous season to enjoy this one.) This iteration is a little more rock and roll, which adds to the anachronism already established via the integrated juxtaposition of traditional and 3-D CGI animation (especially given the Heian-era setting). First on stage is a gender-swapped Abe no Seimei, a legendary onmyouji, as a biwa-playing Makai Alchemist. Romi Park, who voices Seimei, delivers a thoroughly enjoyable performance (no surprise seeing as she did the same for Emma Gusman in the first season). The Makai Knight and his younger attendant remind me of Outlaw Star’s Gene and James in a very good way, and I absolutely love Seimei’s design and weapon (a giant brush). Not that I’m complaining about the visuals, but I really wish Seimei wasn’t so exposed most of the time. (Her battle outfit, consisting entirely of a onesie, thigh highs, and cleavage-bearing corset, is obvious pandering.) Various musical styles, even ragtime (during comedic relief), integrate flawlessly, but too many used in short succession cause the occasional cringe. I lament that the art and animation seem cleaner, brighter, and bolder. Simultaneously, the 3-D CGI seems grittier. If MAPPA is trying to seamlessly meld the styles, that would be a mistake for this title. Still, from Episode 1, this is a fun and visually appealing watch. I’ll be with it until the end. 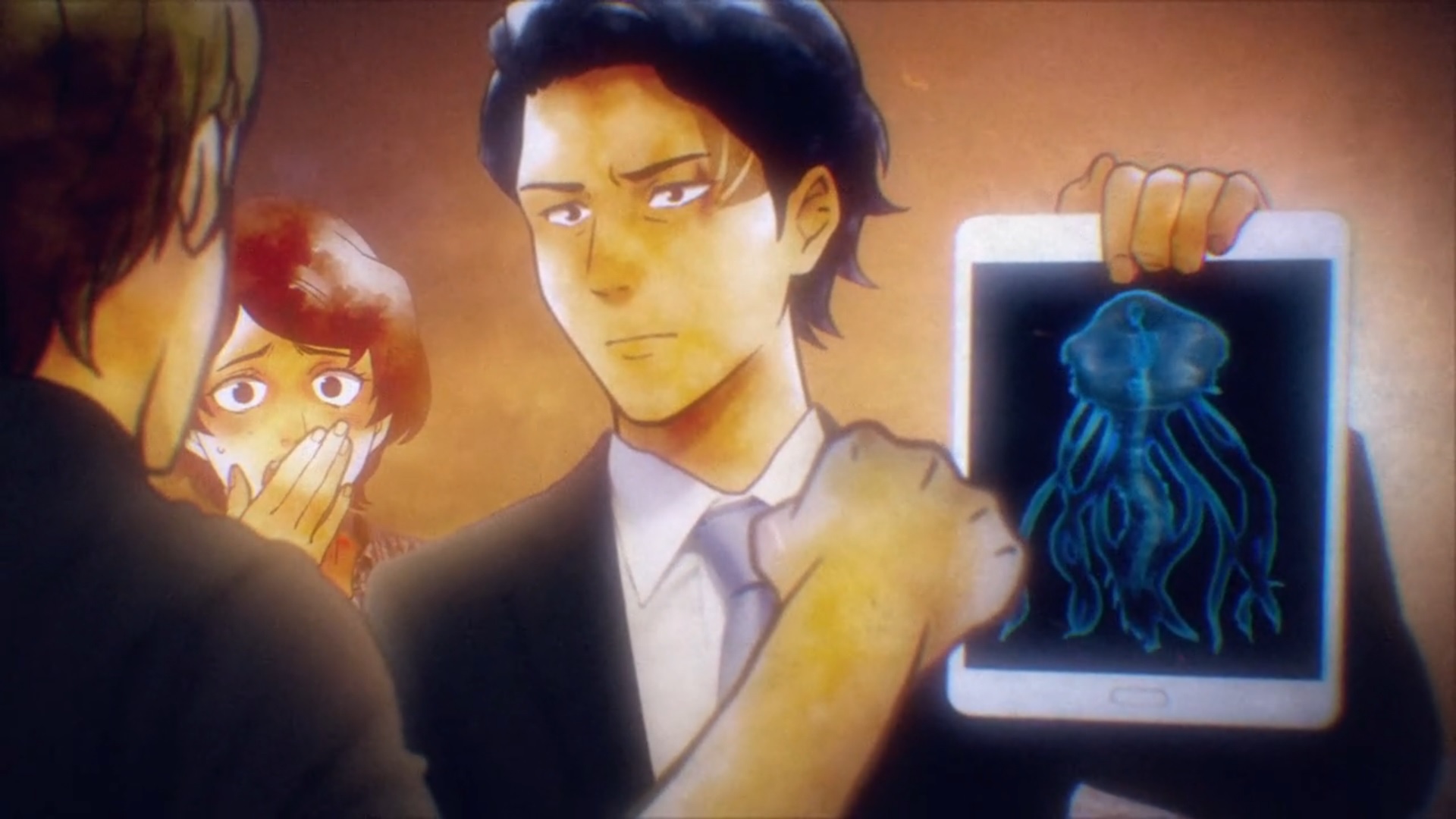 Animated to resemble kamishibai, Kagewani presents "records of…encounters with unknown creatures" that kill people. While the series can be presented as this year’s Yamishibai, Kagewani is not as potent (even though it's by some of the same staff) and differs greatly by featuring a central character who frames the concept of the series as well as bookends every tale. (I guess he’s necessary to clue the viewers in on how odd each specific case is, because the presence of a gigantic dinosaur, an abominable snowman, and jellyfish-human hybrids isn’t enough.) The episodes, at least thus far, are stand-alone and enjoyable as such. The animation’s more fluid than featured in Yamishibai, which makes for a slicker watch but consequently loses some crucial creep factor. The scares aren’t remotely scary, but they are tinged with with sorrow, fear, and anger (a definite plus). Aside from its episodes only being seven minutes long each, reasons to keep watching this series are its beautiful colors, atmospheric audio, and inventive creature designs. 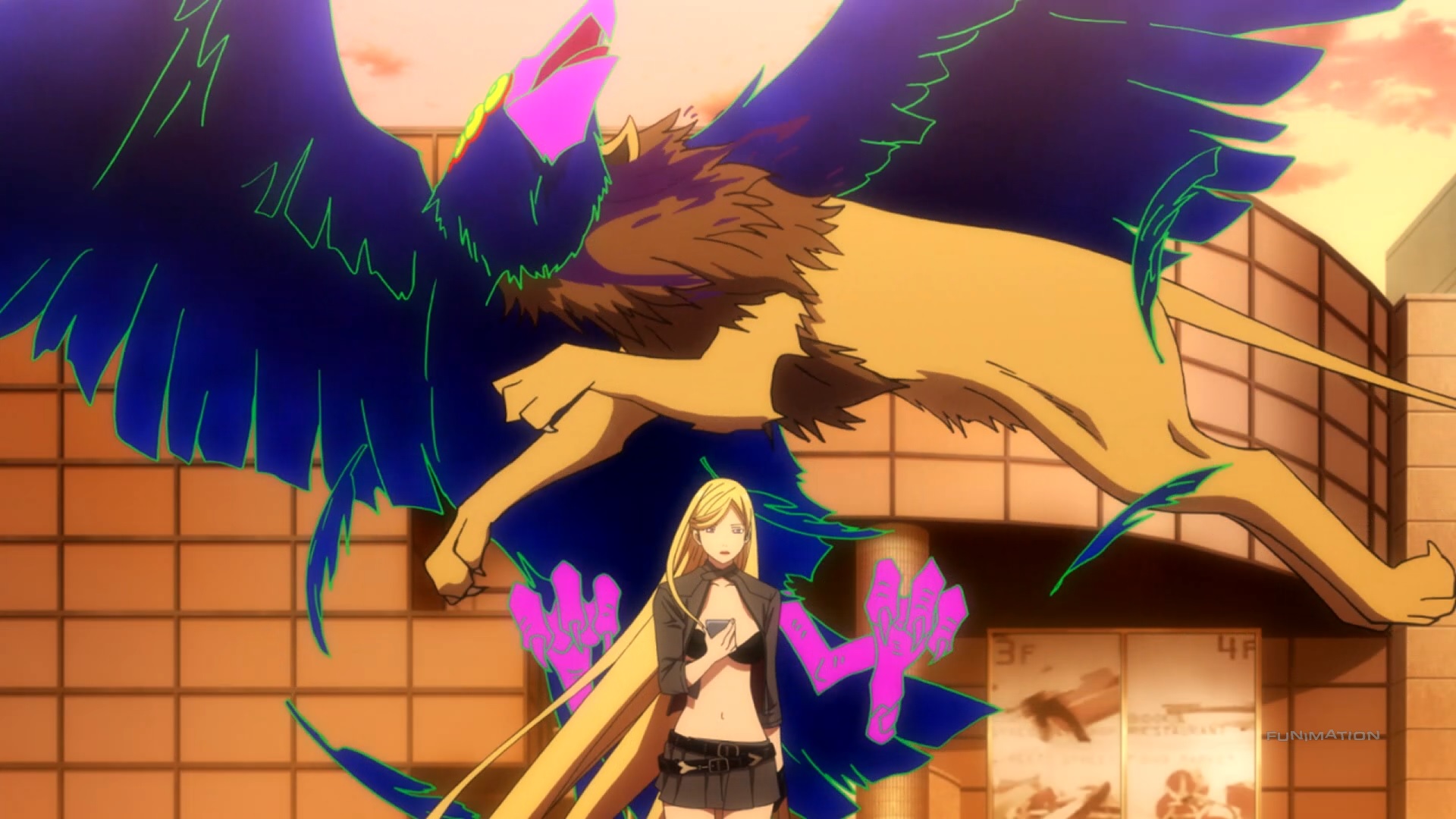 I was hyped (HYPED), after finishing the first season of Noragami, to find out that the next adaptation would be the Bishamon arc. Did I read the source manga? No. But since when is that a requisite for excitement given the adept execution of the first season and the character of focus of the second: a badass war god, vastly under-utilized in Season 1, who wears a bikini and miniskirt and wields multiple weapons? In its first season, Noragami accomplished a lot by exploiting various conflicts. I’d say it’s back to business as usual in Season 2, but several things have changed, and that’s precisely the reason to watch. The established dynamics have not so much changed as been sidelined to focus on new dynamics, namely Bishamon’s back story and mansion-estate filled with regalias (saved souls turned objects). Noragami: Aragoto feels stronger pace- and execution-wise as a result of how well the established rules of the world have been set up, ingrained, and adhered to. A great example is Nora’s “Pick one” line in Episode 2. There’s so much established drama between characters, that splitting focus between what was the main cast to explore a side character is a safe and ultimately rewarding move. Also, the violence is ratched up a few notches, putting to shame ANYTHING in Season 1. If all of the above didn’t make me crave more, the ending to Episode 3 certainly did. 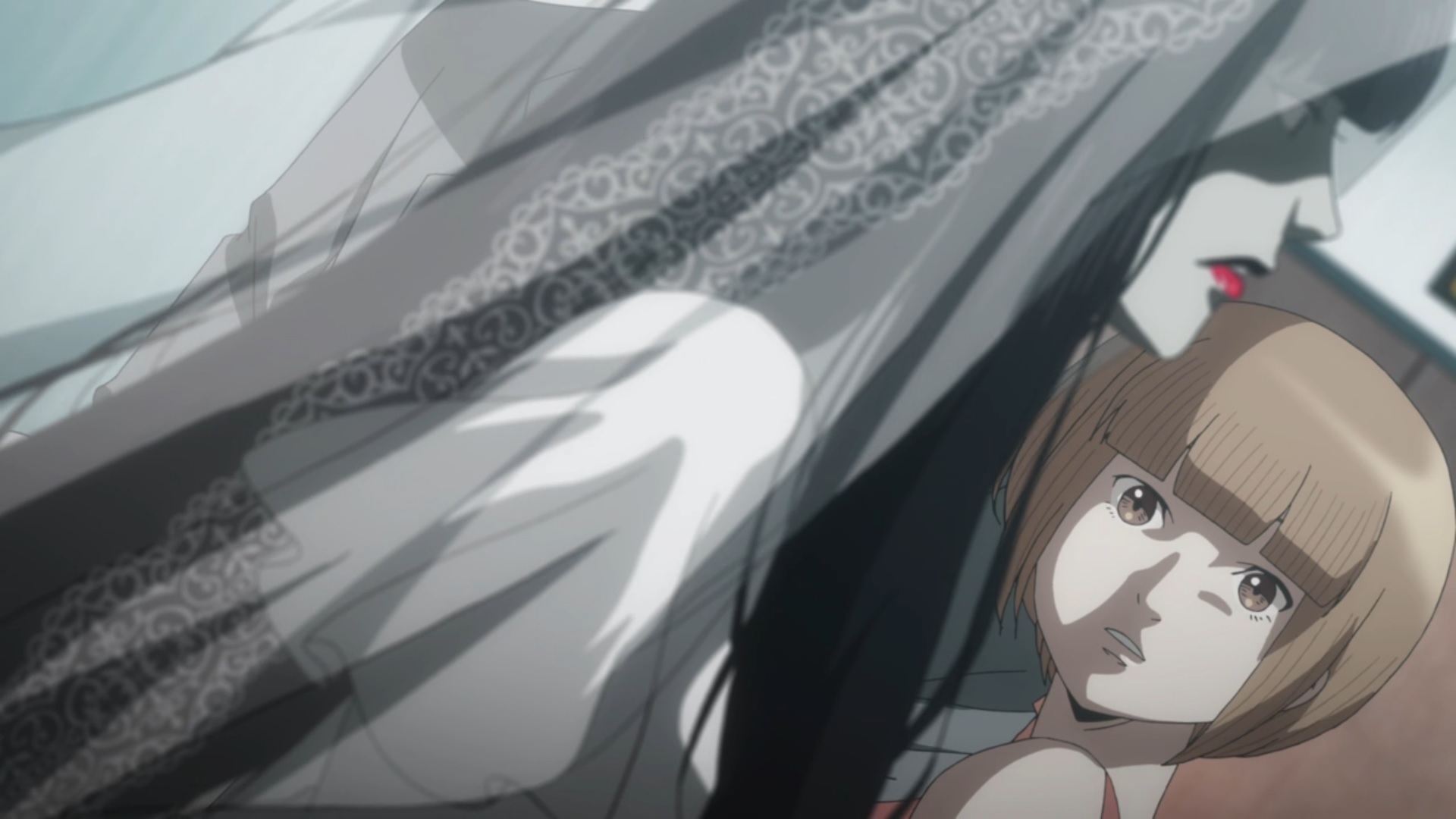 It feels like a long time since a show airing in the noitaminA slot actually felt like a noitaminA show. The Perfect Insider, however, seems like a perfect fit: older (read: not high school-age) characters, meticulous (but not slow) pacing, and visually (audibly, even) distinctive designs. The deliciously balanced character development and plot thus far might very well be attributed to the source material: an honest-to-goodness novel (award winning nonetheless and not of the ”light” variety) by Hiroshi Mori. The story revolves around an existentialist young man wrapped up in work, the younger woman who loves him (single-sidedly), the vacation they take, and the corpse that rolls uncomfortably between them. Honestly, I wasn’t expecting much outside of some great direction after the first episode even though I loved the character designs and how exactingly the main characters are crafted as foils for each other (not to mention an infinitely watchable OP). But crumb by crumb, interesting hints of a deepening story reveal themselves, and the end of the second episode (oh boy!) definitely made this a must watch for the season. My decision’s less to do with the twist, but the singular moment in the hallway: the glances, the intricate use of sound and silence, the horror of unease.