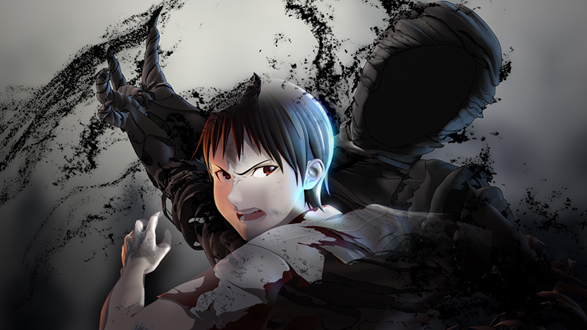 The anime adptation of Gamon Sakurai’s supernatural horror manga finally arrives in the U.S. on Netflix! Yay! It’s a CG anime! Yay? The show opens with a squad of African child soldiers attacking a man who, despite a hail of bullets and artillery, will not die. Before the immortal can wipe them out, U.S. special forces subdue and capture him. Then we meet Kei Nagai, a student who dreams of becoming a doctor … until he’s killed by a truck. To the horror of his classmates, everyone around him, and himself, Kei gets up and runs away. "Ajin" like Kei are seen as highly dangerous creatures yet useful for scientific study, and the Japanese government offers a bounty for the capture of these creatures. Kei finds himself on the run with the help of his friend on whom he turned his back years ago.

CG anime series don’t have the greatest track record when it comes to quality, but I’ve been reasonably pleased with the look of the show so far. Polygon Pictures has definitely honed their craft since their last anime, Knights of Sidonia. It still has moments where objects moving around seem “floaty,” but there have been a couple of moments, usually character expressions, where I think it may have been hard to capture the same emotive quality with traditional animation techniques. Ajin is a great manga (available from Vertical), and I think Polygon Pictures is equal to the task of adapting it for the screen. Definitely worth checking out. 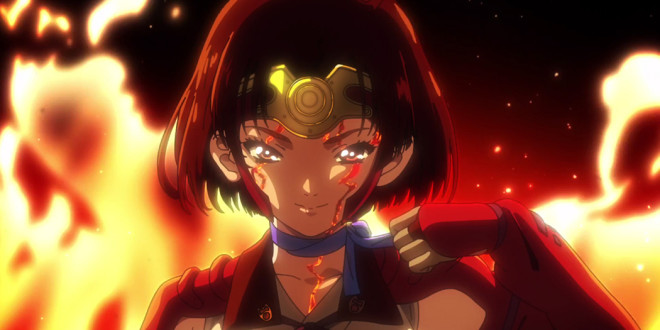 Kabaneri of the Iron Fortress

Zombie-like creatures called kabane have overrun an alternate-past feudal Japan. They cannot be killed unless their molten hearts are destroyed. This renders most weapons useless, even the steam-powered rifles wielded by the bushi. Humanity has survived by building fortified city-stations connected by a network of colossal steam-driven locomotives. Predictably, the kabane find their way into Aragane station and cause the cast to flee aboard a massive train called the kotetsujo or iron fortress. The refugees are forced to place their hopes in Mumei, a mysterious young warrior priestess, and Ikoma, a former rail worker who developed an anti-kabane explosive spike gun.

Kabaneri of the Iron Fortress is like an album put together by a supergroup made up of your favorite artists. As a whole, it’s a nice collaboration, but you can’t help but see Haruhiko “Macross” Mikimoto’s iconic character designs or the sweepingly dramatic music of Hiroyuki “Kill la Kill” Sawano or the action-driven direction of Tetsuro “Attack on Titan” Araki and not compare it to all the things for which these guys are famous. Still, when you get that many great creators together and hand them a script by Ichriou “Code Geass” Ohkochi, odds are you’re in for something fun. And so far, that’s what this a mix — feudal Japan, zombies, steampunk, and a Snowpiercer-esque train city — is. The characterization could be a little less rote, but on the whole, I’m willing to overlook that in favor of finding out where this train takes me next. 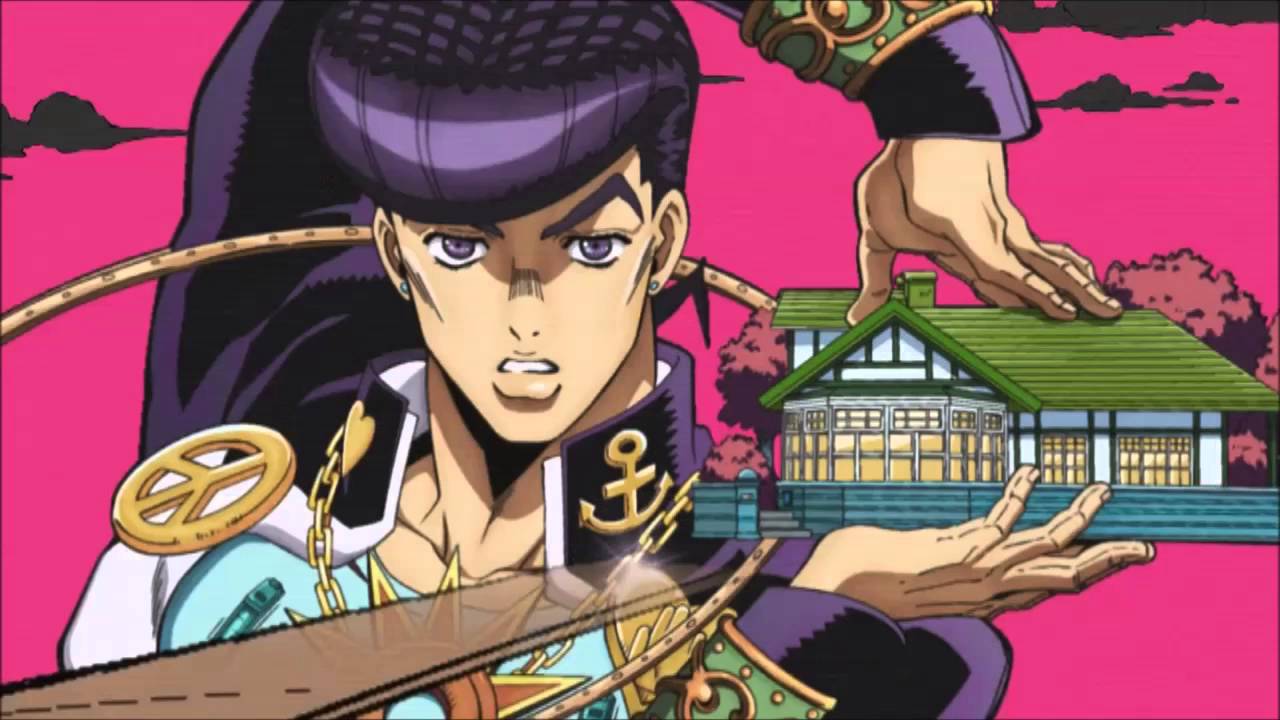 The Joestar family saga continues in the fourth installment of the anime adaptation of Hirohiko Araki’s venerable manga series. Unlike the globetrotting of Part III: Stardust Crusaders, this chapter is set in the Japanese town of Morioh. Part III hero Jotaro Kujo has come to Morioh to find Josuke Higashikata, our curiously hair-conscious new Jojo, and warn him of the increasing number of Stand users in his area. (Also that Josuke is the illegitimate son of Jospeh Joestar, which makes Josuke Jotaro’s uncle despite being a decade younger. Yeah.) Soon after, the Jojos are swept up in events that shed light on the powers possessed by the Joestar bloodline involving a bow, an arrow, and a host of dangerous Stand users.

The best thing about Part IV is that it picks up right where the finale of Part III left off in terms of energy, action, and those uniquely crazy Jojo antics. This lends a sense of continutity to the show that feels like it never went on break at all. David Production once again adapts Araki’s evolving visual style with verve and a striking color palette. The change in scope from global to local injects a stronger sense of setting that enhances the storytelling and raises the stakes in an intimate way that the previous chapters couldn’t quite achieve due to its grander scale. Part IV takes everything that works about Jojo’s Bizarre Adventure and makes it even better. Looking forward to seeing where things in this “Crazy, Noisy, Bizzare Town” go from here. 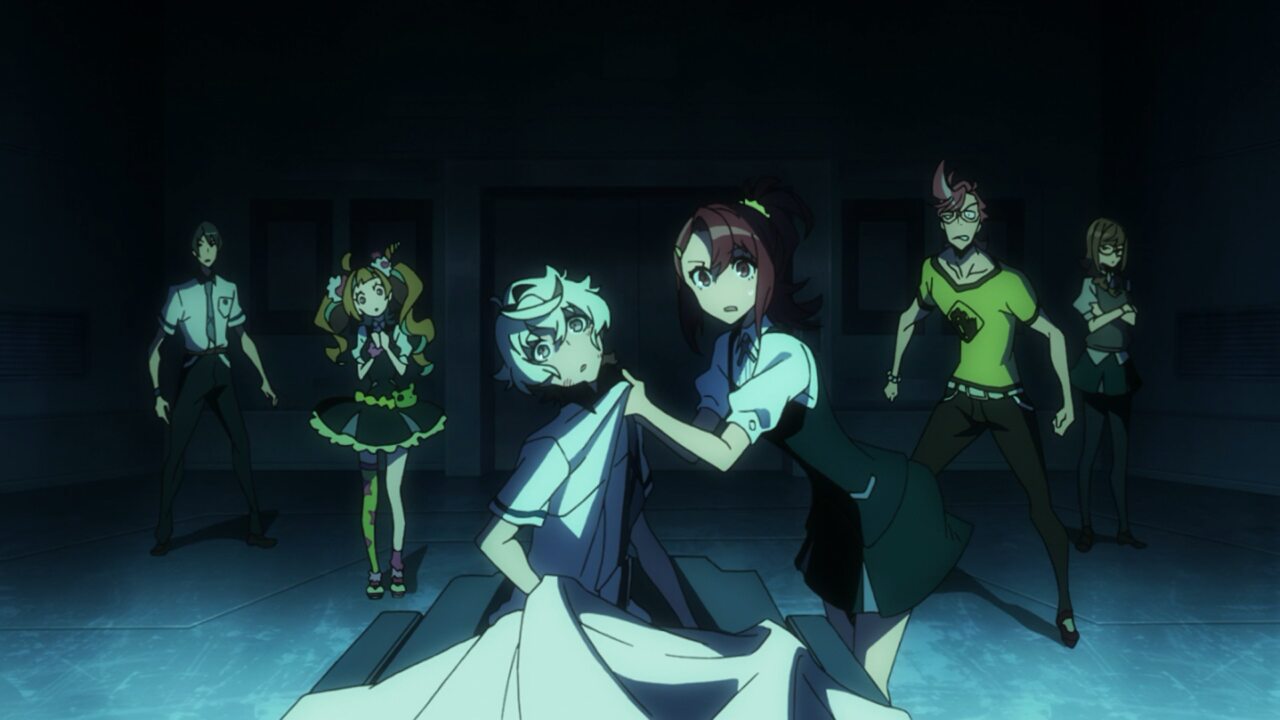 Did you ever wonder what The Breakfast Club would be like if it was a very anime anime? Well, do I have the show for you! Kiznaiver is Trigger’s second full-length animated series after the hugely popular Kill la Kill and features a story written by Mari Okada of Anohana and Mobile Suit Gundam: Iron Blooded Orphans fame. A boy that cannot feel pain, Katsuhira, encounters a mysterious girl, Sonozaki, who has chosen him and six (ultimately seven) other people to become Kiznaivers. Kiznaivers are those who become bound together through something called the “Kiznaiver system,” which shares and splits their physical pain between them. After Katsuhira and the rest of the cast are captured and made Kiznaivers, Sonozaki begins to give them missions with the aim of getting them to know each other and form real bonds. Because…reasons? And they’ve got the summer to figure it out, or else there will be severe consequences … maybe.

Well-worn character tropes abound in this cast. The only obvious stereotype missing is a super-nerdy Anthony Michael Hall-type character. Trigger’s work in character design is solid, and the animation is also well executed. The opening of the show is outstanding, and the Boom Boom Satellites song gets you ready for something dynamic and fresh. The rest of the show is filled with melodramatic angst over how difficult it is to form real bonds between people. This show has to do more than look pretty, or pretty soon I’m going to move on.

This is the passionate tale of a young man struggling to balance his dreams of being the hottest DJ in Shibuya with his equally important dream of carrying on the family pork cutlet restaurant. Our noble hero, Agetaro, the third generation scion of the Katsumata family, struggles to master even the most basic tasks in his family’s restaurant but is often relegated to chopping the cabbage. Agetaro’s true potential appears set to never be realized…until one fateful day. Agetaro makes a delivery to Club Box, hears the illest beat of his short life, and meets his destiny. DJ Big Master Fly, who was in his family’s restaurant just a bit earlier, spins in a way that reminds Agetaro of his father, which leads to an epiphany. DJing and making tonkatsu are really the same thing (even though they’re completely different). From that day, our passionate hero sets out to become both a worthy inheritor of his family’s business and drop the sickest mixes in all of Shibuya. Along the way, he’ll find romance, fearsome rivals, and wise mentors. Each step along the path, he finds new ways to connect the seemingly unrelated disciplines of DJing and frying pork.

Studio Deen has reached new heights of greatness in their faithfully animated version of this classic tale. Tonkatsu DJ Agetaro is a must watch for any real anime fan who is interested in the Shibuya club scene, ear anatomy, pork cutlet preparation, and the technical aspects of the DJ’s craft … or in other words, everyone.