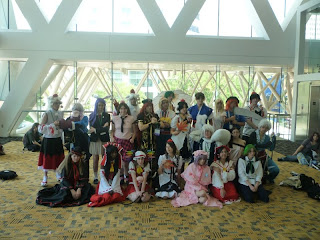 Let me be blunt: I am a massive fan of the Touhou series of vertical-scrolling shoot-em-up games, and all the fan-works that surround it. It would take an entire another article to explain the sheer breadth of the phenomenon for a primer/overview check out the piece I wrote for Evan Krells Ancient Technology is Always Superior Magazine.

Being a giant fan I jumped at the chance to attend a panel that explored the series, and as the program guide pegged the panel as being accessible no matter what your familiarity with Touhou, I dragged my friend Gerry along with me to see how the panel would be for someone who knew next-to-nothing about the franchise. So how did we fare, the utter newbie and the jaded fan?

First, a logistical item: The panel was originally scheduled for 9AM Friday, but when Friday rolled around the panel vanished from the Otakon Guidebook app and moved to 2:30PM Sunday due to panelist availability. Its great that staff were able to move the panel instead of canceling it outright, although this led to the new, smaller panel room being packed out.

The panel was headed up by five separate hosts, and was sadly a victim of the too many cooks spoil the broth adage as the panelists would often stumble during transitions from one part of the panel to another, asking each other what came next in the program. A lack of tight forward planning was made apparent around 20 minutes into the panel when an impromptu Q&A was called with the inviting phrase Just ask something, to fill time.

The actual content presented in the panel was well chosen, if marred by one instance of bad judgment. This included both the original Touhou games and some of the more famous fan-made games that use the series as a basis, all of which worked flawlessly on the projector screens. Seeing an average player, a rank newbie, and then a frighteningly skilled player each play one of the games in turn was a good idea and entertaining for everyone in the room. Commentary on the games shown while in progress was insightful, but demanded some familiarity with the franchise to understand. More basic background information on the games and aspects of fandom would have been helpful to make the subject more approachable for total newbies. In particular a greater mention of the Touhou music scene would have been very welcome, as this was relegated to a few offhand mentions.

The one instance of critically bad judgment came halfway through when one of the panelists showed an example of the many fan made doujins the series has spawned. This particular example was called Miss Yukari, Please put on some clothes! and was primarily about a small subset of characters getting buck naked and having mundane adventures while strategically placed word bubbles and sound effects covered their naughty bits. Frankly, this was a terrible choice of material to present and soured me on the panel. If you have to yell Its safe for work! at a bemused crowd then something has gone very wrong.

The Q&A session at the end of the panel was surprisingly insightful half of the questions asked were memes that were quickly dispatched by the panelists and the other half were very pertinent comments such as how to legally purchase Touhou goods, and the best starting point if you are interested in playing the games themselves.

At the end of the day, the panel was a success as it did persuade my friend Gerry to try out one of the games in the series. One thing that could be improved in future instances of the panel would be to provide a more comprehensive initial introduction to introduce the franchise and its self-contained world to people. Another aspect that would certainly help would be a stronger connecting narrative to guide the viewer from one item to another.