Japan's Apocalyptic Imagination in Anime, Manga and Art, a panel at Otakon 2011, featured essayist and Japanamerica author Roland Kelts, who offered examples of apocalyptic imagery in Japanese art and pop culture, put them into historical and cultural perspectives, and analyzed them. While the focus of his examples was definitely anime films, Kelts went as far back as Katsushika Hokusai's famous woodblock print The Great Wave off Kanagawa (pictured right) to show how apocalyptic imagery is nothing new to the island nations creative focus.

The Great Wave..., published between 1830 and 1833, depicts a large wave immediately threatening boats off the shore of Kanagawa Prefecture. While almost 50% of the frame is taken up by the wave, its ominous nature can actually be attributed to how tiny Mt. Fuji, a symbol of Japanese pride and culture, is by comparison. Another threatening aspect noted by Kelts is the crest of the wave, which seems lined with "clawing fingers." Hokusai, according to Kelts, has often been referred to as a precursor or gateway to modern manga. And with that smooth transition, together with the statement that anime and manga have always been at least in part a response to catastrophes (which Ill explain a little further down), the discussion shifted to the God of Manga, Osamu Tezuka. 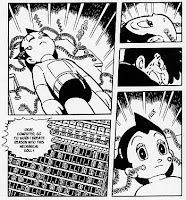 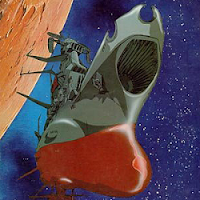 Kelts specifically noted Astro Boy, which emerged after World War II, and pointed out how the story uses radiation as an aspect of creation rather than destruction. This "boy born of radiation" shows a faith in the same technology (or along the lines thereof) that delivered such a crushing blow to life not even a decade earlier. Along the same lines, Kelts offered up a similar method of thinking regarding the resurrection of the Japanese battleship Yamato, which was the pride of the countrys naval fleet as one of its most technologically advanced WWII warships. After its defeat, the Yamato came back to life via fiction as a technologically superior spaceship ("Take THAT, America!"). In addition to Kelts also mentioned the birth of mecha as means to fight the disillusionment with current technology. In all instances, destructive new technology didnt bring about fear in art but rather promise as well as hope that what has been survived can be learned from and built upon to become stronger.

Next Kelts focused on two anime film directors, Hayao Miyazaki and Isao Takahata, and their specific works. Perhaps to take advantage of Ponyos immediacy, Kelts pointed to this Miyazaki film as a shining example of the portrayal of natural disasters and Japanese natives reactions to them. Kelts focused specifically on the scene where personified waves of a storm are reaching up and over the road with cars, which are trying to escape. Kelts said that this portrayal is not a malicious one but rather a dangerous fact of life. He said that the eyes in the waves had a sort of aimless, "staring into space" aspect that relayed the same sense of natural innocence as another one of Miyazakis creations, Totoro. Kelts pointed out one scene in particular from My Neighbor Totoro built on a couple of images meant to evoke memories of the Japanese people who went through WWII. In this particular scene, characters in mismatched clothes watch as a man drives off into the countryside in a jalopy. According to Kelts, this scene was one that took place in many homes during WWII as those types of cars were simply what were available and clothing supplies were scarce. In all, Kelts concluded that since Miyazakis family was one of relative privilege and could afford to escape the paths of destruction, that personal history is what colors his work. 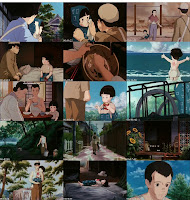 This contrasts Isao Takahatas Grave of the Fireflies, which is tied to the notion of not being able to escape and having to deal with the event as well as its aftereffects. Most of the movie, after all, centers around trying to define and etch out an existence after an American firebombing raid consumes life as the children had known it. Kelts said the differing vantages between directors makes sense given the fact that Takahatas family was of lesser means and could not afford to escape.

After a few more specific examples of the panel, an audience member asked if there was a difference in how man-made and natural disasters are depicted. Kelts postulated that manmade disasters serve as an analogy to the evil that resides within all of us. He noted that even historical apocalyptic depictions spare specific countries any finger pointing. Instead the focus of most anime that deals with man-made apocalyptic scenarios open with disasters instead of trying to prevent them (as with the majority of Western media). This further demonstrates the themes of coping with and overcoming ourselves. Natural disasters, said Kelts, are portrayed as indirect, non-intentional ... just a part of life thats meant to be dealt with and overcome. A rather pertinent question from the audience as to if there has ever been any backlash to the depiction of such tragedies reaped a rather funny, rather thoughtful response from Kelts, who said that there have been none to his knowledge but that the popularity of mo might just be that ... another means of escape from economic or climate-based disasters or both.