Dolls. Is anything in real life creepier? Forget about the associated gender bias for one moment (dolls vs. action figures) and think: if you saw a random stranger talking to, animating the movements of, and interacting on a seemingly bidirectional level with any other inanimate object a lamp, a tinfoil helmet, a severed lock of a former lovers hair, youd think that person insane. Yet as toys, dolls grant their owners a certain degree of amnesty from such critique so long as they fall within a certain culturally agreed upon age range and exhibit gender identity appropriateness in their choice of playthings. Even doll owners who defy those socially embedded norms are not immediately deemed insane. Why then are Ball-Jointed Dolls (BJDs) and their owners so ostracized? At the Asian Ball-Jointed Dolls as Visual Culture panel at Castle Point Anime Convention (CPAC) 2011, panelist "Tempest Strife" explained efforts required by the hobby, how those foster owner attachment to the dolls, and how physical aspects of the dolls as well as traits of their owners are exploited by the media in order to shape public opinion. 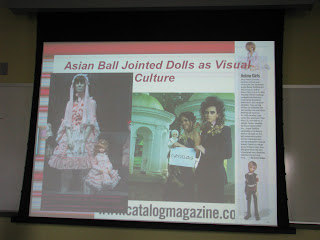 Tempest started off by setting BJDs apart from their plastic counterparts by noting how the latter is comprised of mass-manufactured, static, non-polished, semi-posable figurines: pre-made molds around which owners minds must build a plausible reality or personality. On the other hand, BJDs are hand-crafted and fully customizable and allow owners to make the dolls in their own image. This doll as avatar idea even comes across in one of the manufacturers (Volks) mantras of building another yourself. This is no understatement. BJDs can be customized to the buyers desire with regards to skin tone, eyes, appendages, body type, and hair in addition to the myriad outfits and accessories available to adorn the laboriously conceived mini-me. Ms. Strife also pointed out that the amount of time and number of decisions that went into the conception of each BJD added to the sense of anticipation and attachment experienced between the completion of an order and its arrival. If this wait is likened to the months parents nervously spend waiting for their own baby to be born, it is possible to see the kind of attachment BJD owners form with their other themselves. 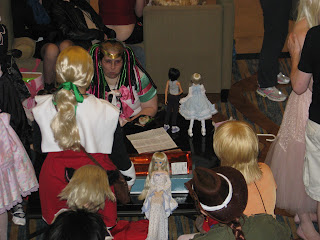 Concerning the levels of attachment betwixt owners of regular dolls vs. BJDs, depth of feeling is further differentiated by semantics of acquisition. Whereas regular dolls are bought, BJDs are brought home. This may seem an inconsequential difference, but what follows is definitely not. It is common for BJD owners to record, via video and photographs, box openings and celebrate such arrivals as births. These photo welcomings arent the only media-based evidence used to accuse BJD owners of obsession. Pride taken by owners in their BJD customization efforts, the giving of form to secret dreams in an aesthetic representative of the owners own style, can only be fully realized when appreciated by others. So those involved with the hobby often attend public meets and publish their collections on the Internet in presentations that range from photo shoots to photo stories. This form of presentation is not original. Hans Bellmer, a German artist, used life-sized pubescent dolls as the subjects for his photographs, which were published in surrealist journals and arguably started the tradition of doll-based photo stories. However, one quick look at BellmersWikipedia page will explain the ringing of modern societys prude alarm. 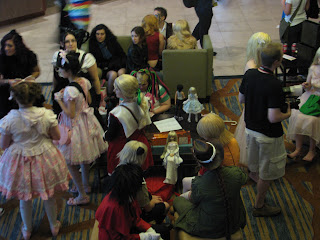 While most of us in the USA are uncomfortable with public (and even private) nakedness, there exists a major difference when it is seen in what is perceived as a childs hobby vs. art and an anatomically correct vs. neutered state. This nervousness is what sparks the playground-style teasing seen in Western media coverage of BJDs. Not a single news story fails to mention the presence of genitalia on BJDs, which stands in stark contrast to neutered dolls such as Barbie and G.I. Joe. Other common elements in newscasts used to persecute BJDs include removing the dolls wig to make it seem sickly or less recognizably human; focusing on the cost per doll, which can range from hundreds to thousands of dollars; and even automating the dolls movements, such as spinning its head or raising/lowering an appendage, to make it look possessed or unnatural. Over-exaggerated examples of BJDs are not the only focus of finger-pointing newscasters. Tempest pointed out that Western broadcasts specifically target the nervous, the fidgety, the socially awkward for on-camera shock value and the ratings that come with it (or at least to keep the news anchors entertained). This is complemented further by the portrayal of BJD owners as obsessive, which is reinforced when the fact that it is rare to find a BJD owner who only has one doll is combined with the aforementioned statements about cost and emotional attachment. BJD owners are not only interviewed in the USA (of course), however, but their treatment and the story focus tends to vary greatly.

In Japanese media, for example, news stories shows both sexes treating dolls as children. What the West perceives as an obsession translates to almost parental pride. There is a certain air of honor concerning the degree of caretaking required for BJDs, and the bestowing of names, personalities, and back stories is seen as a creative act rather than psychotic. One additional difference is in the focus on obsession, which is seen as a great joy derived from the size of the collection as opposed to a fixation on customization. 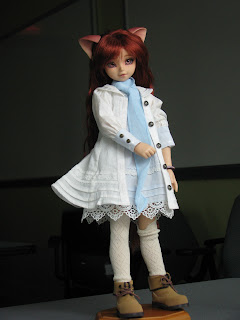 According to Tempest, dolls are seen by many as creepy to begin with, because the figures can seem so uncannily human and yet are static ... almost corpse-like. It could be said then that the juxtaposition of these concepts elicits a knee-jerk emotional reaction to the innate fear of death. Ms. Strife did an excellent job of exploring and explaining aspects of the dolls and their owners that Western society generally finds creepy. She also was quite adept at pointing out the cultural bias at work in the Western media and mindset that ostracizes BJDs and those that dare to love them. I say and wholly mean the latter because the panelist, whether knowingly or subconsciously, kept stroking her BJDs hair or caressing its arm whenever she walked near it, and that sort of affection for an inanimate object (at least to me) is just plain creepy.

* Individual doll pictures are of Tempest Strife's BJD, which she was kind enough to share with the panel audience. Group photos were taken at AnimeNEXT 2011.