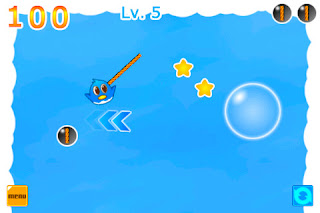 Have an iPad? Want to play games on it? Don't want to throw your money around the app store like a madman in search of a decent purchase? You've come to the right place, my good friend! Pull up a chair and I'll give you some more rapid-fire reviews of iPad games!

iPowa was released with zero fanfare onto the App Store, and I picked it up day one on a whim. It’s an endearing little puzzle game where you flick a tiny penguin around the screen to collect stars, using bubbles that act as launch pads and various randomly placed power ups to keep from falling off the bottom of the screen and ending the game. There is no overacting structure or plot line, just a fun little time waster with a global scoreboard and infinite replayability due to its randomly generated levels. iPowa has given me hours of enjoyment playing it on the bus, and the low price even includes an iPhone port in case you own one of those as well. 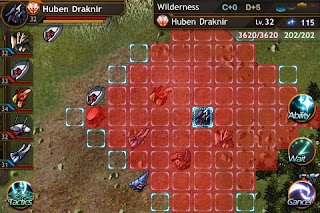 War of Eustrath is a turn-based strategy RPG which very closely follows the mold of Super Robot Wars and Fire Emblem. You control a small number of very powerful but specialized mechs and get thrown into pitched battles against hordes of other mechs as ... you do something or other. I have to admit that while the world is well realized, the plotline is instantly forgettable and I often found myself skipping past the character conversations between battles. This is not entirely the fault of the plot itself — in fact it is quite interesting — but it is horribly copyedited and reads like a Google-Translated version of the original script. Putting this aside, the combat itself is very enjoyable and well balanced except for a few brutal encounters that you will have to throw yourself at over and over again to get past. There is a robust leveling and customization system, as well as multiple plot paths and endings that depend on your choices and how well you play. A rather pricey offering, this game is still well worth a look if you are a fan of strategy games. You may want to wait for an update if you can’t stomach Engrish, though.

NOTE: Since this review was originally written a major patch has been released that corrects many of the problems with the script. The story is still inconsequential, but at least now it is in legible English! 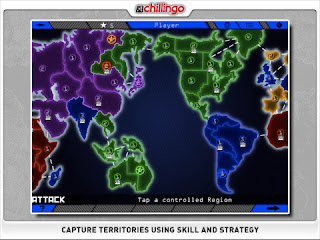 Remember the first iPad game article, where I reviewed Strategery, a game much like Risk but not quite? Well, Dominion is a straight-up clone of the modern rule set of Risk with a cleaned up visual aesthetic. If you have ever played the wonderful nuke-em-up game Defcon you will recognize the clean, faintly glowing look instantly. The AI is a bit dense and so the single-player mode is best used as an extended tutorial beyond the basic one provided, or as an exhibition mode to view the different maps provided. Multiplayer is where the meat of the game lies, especially at the time of writing as the game has a dedicated player base viewable via the game browser. There is one glaring oversight however — if, on the first time you start the app, you turn off Push notifications, you are unable to enable them later on. Due to this I now have an abysmal online record as I have no idea when I am supposed to take turns in the games I have signed up to. One upside is that the game is updated frequently with new maps and other goodies, something that looks likely to continue in the future, even if the additions are nothing earth-shattering. 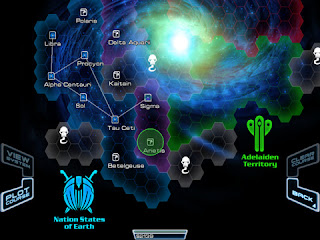 This is going to date me, but this game is an awful lot like the old spacefaring game Elite. You are given a spaceship, dumped into an open map, and it's up to you to trade, shoot and mine yourself to the top of a dog-eat-dog galaxy. Sadly, Warpgate does not quite live up to the comparison, as the whole thing feels disappointingly sterile. Even in hostile areas where the locals want your head on a space-pike, things feel very empty and inconsequential. The tutorial plot chain drags out endlessly, both by screen after screen of empty dialog and by the clunky menus and interface. Combat feels almost random and it is hard to intuit if you are succeeding or not, or even if strategy would help more than simple button mashing. All of this is a shame as behind all these clunky elements is a well-constructed core with an interesting universe to explore. Sadly it is slathered in a thick layer of gloop that makes the game unpleasant to play, even excepting the frequent crashes. I would still recommend trying the Lite version if space exploration is your cup of tea, after all inscrutable interfaces are almost a point of pride for the genre at this point. In all seriousness, you may find yourself in love with it and able to overlook the flaws in favor of the depth of experience on offer here. 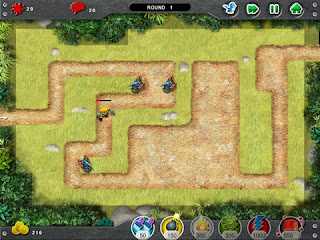 I must admit that I am rather fed up with tower defense games, and unless they do something exciting I tend to tire of them quickly. Tweet Defense’s gimmick is that it links to your Twitter account and changes gameplay variables based upon the status of your account. In particular there is a "booster" function where you get a large buff for following a particular account each day. An important thing to note here is that one of the driving forces behind the game is a marketing firm and so this particular game mechanic feels rather invasive and unsettling. But never mind all this, how does the game play?

Well, poorly. First off, the game is bloody ugly. The general design is not very pleasing to the eye and without a spark of originality. The game plays out at a painfully slow pace and it is worth noting that it is a great deal harder if you eschew the Twitter account linking, making this slightly unsavory feature a must to actually play the game. I was honestly hoping for a more inventive use of the Twitter association, such as having enemies or towers procedurally generated by incoming tweets.

I only downloaded this game because it was free for a day, and even for free it feels like a waste of time. The original price of $8 sounds like daylight robbery. Avoid. 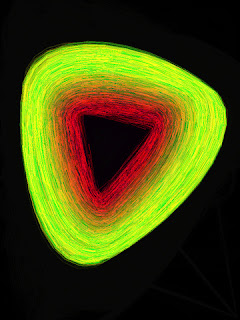 This is a bit of a cheat, really. Uzu is not a game, but an experience. It calls itself a "kinetic multi-touch particle simulator" and that's exactly what it is. You tap the screen with one or more fingers and a sea of multicolor particles whirl around the screen in various patterns and motions much like an interactive music visualizer. The effect is amazingly entertaining, and heightened by listening to good music at the same time. I have lost an hour of my life so far playing with the app while utterly enraptured by it. Plus, it's a dollar. I've paid much more than that before for less entertainment, like when I saw Transformers 2 in the cinema. Get this now, and amaze your friends with it. 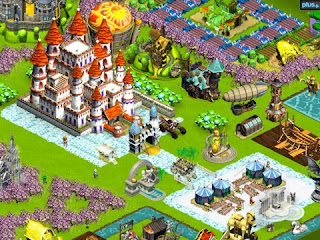 I have a theory as to why this game exists. It goes like this: Developers NGMoco took one look at Farmville and the other Facebook free-to-play micro-transaction games and said, "hey we should get in on that too!" The result is a rather daft-looking clone which is more abrupt at demanding you pay money for features and blackmailing your friends into signing up as well, cutting short the tutorial into what could have been an interesting fantasy kingdom sim. The game has an irritating tendency to crash, and this coupled with an utter lack of charm and the horrendous loading times meant that I found it hard to be bothered with playing after my second session was abruptly ended. If you must play a time-sink game, you would be better off playing a more established and well-known example.