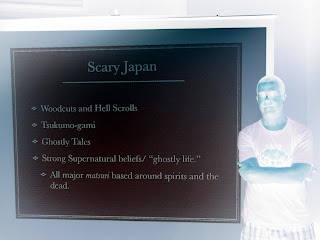 If his regular presentations are to be considered epic poems, then Kowai, Yokai and the Culture of Fear in Japan, is a focused exercise in extended metaphor. Like his other panels examining one particular work (Neon Genesis Evangelion), one particular director (Hayao Miyazaki), or one particular field of study (fanthropology) each taking into account several defining elements and giving supporting examples thereof, Charles Dunbar uses researched cultural perceptions and superstitions across several eras to define an overarching theme of fear regarding the reasons behind the things that go bump in the mind of the Japanese people.


With projector as campfire, Dunbar explains that the sheer age of Japanese culture means that every subsequent generation since the first has had a hand in building upon and inventing new ways to scare themselves and those who survive them. This leads to a culture with a dense history of superstition, specifically one with a ubiquitous focus on the fear of reprisal and retribution. Dunbar, equipped with his PowerPoint Pokdex, explains several types of ghosts along the way, examining nomenclature, common traits, and reasons for existence, and then accentuates select examples by reading aloud from actual tales.

The breadth of types of apparitions (and examples thereof) included in the presentation is impressive, but specific tie-ins to anime are minimal compared to Dunbars other panels. Luckily, anime viewers need only take in all the information this panel is offering and then apply it to whatever it is they are watching to appreciate the inherent anthropological aspect. Dunbar does, however, rather ingeniously link Japans fear culture with anime, explaining how the latter helps people cope with the former ... or as he so poetically put it, "as if the Japanese build Gundams to fight the monsters." Personally, I would have liked to have seen more insight like that but directed towards what spawned changes in specific fears and the resulting embodiments thereof between eras.

It speaks to Dunbars sense of presentation that this panel does not feel like an instructor orally reciting an encyclopedia entry. His intense interest in the subject matter and humorous delivery combine to produce an entertaining and informative initiation into the shadows that haunt the Japanese mindset. This was a great panel, and it was only the initial version. There was even extra time for more theories, stories, and examples, so like most Dunbar panels there are bound to be edits, revisions, and additions to look forward to in future versions. Look for it and request it for your favorite con!